From styling, to power, to handling, there’s lots to like

Say what you want about Lexus’ styling decisions as of late—the spindle grille, angular light treatment, aggressive side creases—they are adventurous, and it’s nice to see the brand breaking out of its shell on the stylistic front. Yes, in some cases, it’s a little much (the NX 200t is very much an acquired taste) but in others, it’s a certified home run.

The Lexus IS 350 F Sport you see here, is one of those cases.

The blacked-out hourglass-shaped spindle grille and hockey stick LED DRLs are eye-catching for sure, but in a car with as many design flourishes as this, sometimes it’s the subtleties that really push it over the top. The way the rocker panels join a sweeping crease over the rear wheels, for example. Or the fold along the beltline; even the wing mirror-mounted turn signals do their part to form a complete package. Yes, we’ve seen those throughout the industry, but they just work so well here.

It’s a good thing the IS has the styling chops, because it’s in a competitive segment with a massive German influence. The Audi A4, Mercedes-Benz C-Class and BMW 3 Series are all big sellers; the IS, though, makes a case for itself by being the best-looking of the group. Indeed, it makes all three of those model ranges look quite tame by comparison, from the styling details to available colours.

Inside, the tone changes a little. It’s not bad looking; just a little awkward. I’m just not sure why Lexus thinks it absolutely must have the centre console ramp up directly to meet the centre stack. There are no Volvo-style hidden storage bins behind said stack, resulting in a console that’s bereft of usable storage bins. Cupholders are fine for your morning coffee, but I’m not a fan of having to use them for cell phone storage, lest said coffee spill on your mobile. I ended up using the sizable platform left by the deeply-recessed infotainment screen for my phone. The lack of a lip on its leading edge is a good indication that’s not what it’s meant for, as your phone is liable to slide off under moderate to hard acceleration. 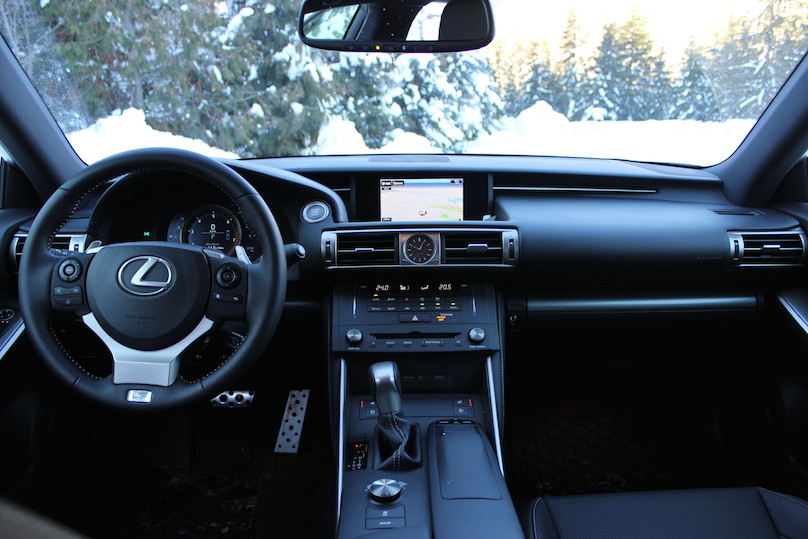 Of course, there’s always the centre armrest storage, but like any of these, it’s tough to access and again, not my first choice for storage.

Up front, the IS 350 is near-as-makes-no-difference to the competition space-wise, so it’s got that going for it. The infotainment screen we talked about earlier is clear and uses some properly modern fonts and graphics, but I’m somewhere around 50/50 on whether or not I like the way you navigate the menus. 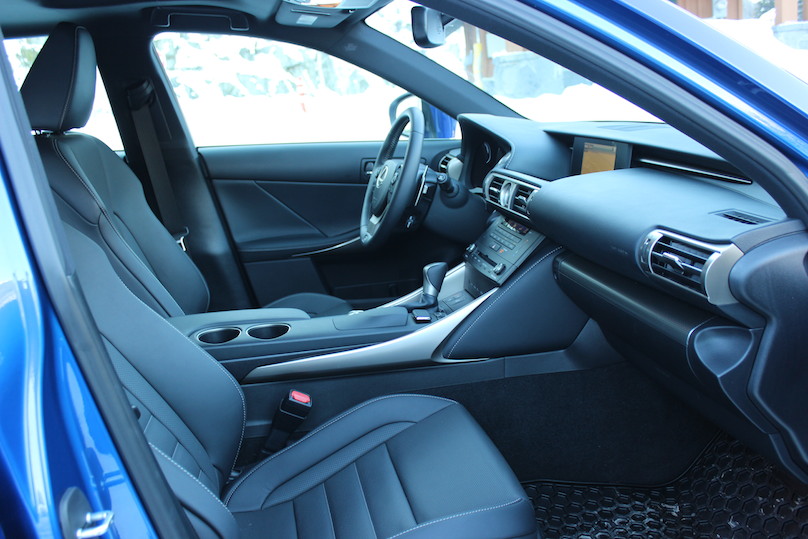 Remember those storage bins the centre console doesn’t have? Well, that’s because the infotainment controls—consisting of a joystick and wrist rest—take up the required real estate. The joystick works a bit like a mouse, with the cursor first responding freely to your inputs, eventually snapping to the nearest action button. Trouble is, it’s a little clumsy, sometimes not going where you’d intended. It’s better than the touchpad found on other Lexus models, but I think just a basic Acura-style scrolling system would do just fine.

You can forget all that for the time being, though. You can forget it, because there is a very good engine and chassis waiting to be exploited as soon as you prod the starter button, which comes as standard on all IS models.

Of course, if you’ve been watching the news, the big story about the ’16 IS is the arrival of the 2.0-litre turbo-four cylinder shared with the NX 200t. The “350” in my tester’s name denotes it’s being powered by the 3.5L V6 from last year’s car. It hasn’t changed for this iteration, but that’s OK because it remains a great powerplant. 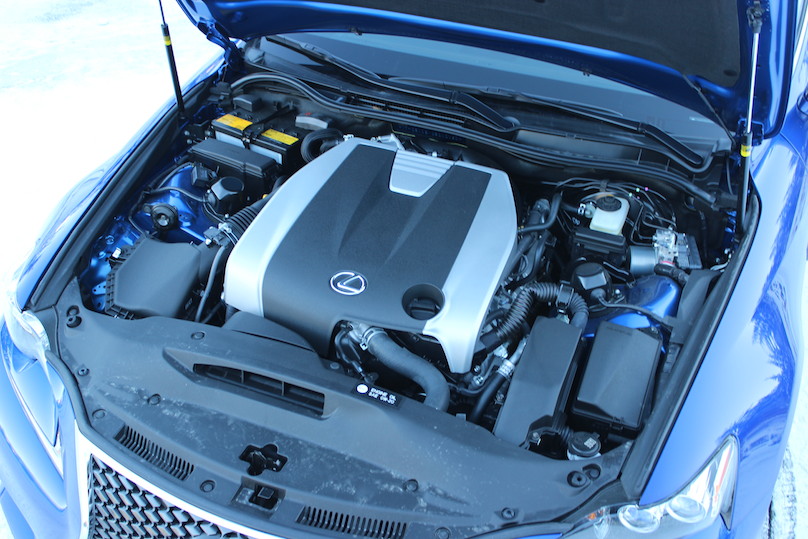 Power is rated at 306 horsepower and 277 lb.-ft. of torque. That’s down on what’s made by the BMW 3 Series 340i xDrive, but it takes the Audi A4 to the cleaners on the power front, with figures that sit closer to that model’s hi-po S4 model.

Which is somewhat fitting my car’s “F Sport” designation; there are two F Sport packages available: the Series 1, and the Series 2, as found on my tester. I say “somewhat fitting” as special wheels and adaptive suspension are really the only performance additions the pack provides. The rest is centered around the exterior styling and tech, adding items like navigation, heated and cooled front seats, power moonroof and a special heated steering wheel.

If you’re of the performance-minded ilk, though, you shouldn’t let that stop you. The available power is ample and since it’s naturally aspirated, it comes on so smoothly and quickly that you’re glad the chassis is up to the task of reigning it all in.

Which is where this story’s sub-header comes in: this thing is an absolute monster in the snow. In a good way.

There’s a snow mode, which modifies the AWD system and transmission to provide the best possible grip in slippery situations, and grip it does. Try as I might on some of my favorite snow-packed roads, I couldn’t get the tail out, couldn’t get the nose to push wide; indeed, even straight-line panic braking maneuvers hardly bothered the ABS—that’s more thanks to our tester’s snow tires, but it doesn’t change the fact that this is a massively confidence-inspiring vehicle on the snowpack. Even snow stars like the Volvo S60 got more out of sorts in these conditions than the IS did.

Not only does it make a difference on the performance front, but it makes the IS a more viable vehicle for ski trips and other winter adventures. I guess to really make it 100 per cent so, you’d want a little more storage — the type of storage provided by a wagon, say – but at least you get folding rear seats and 306 litres of trunk capacity. 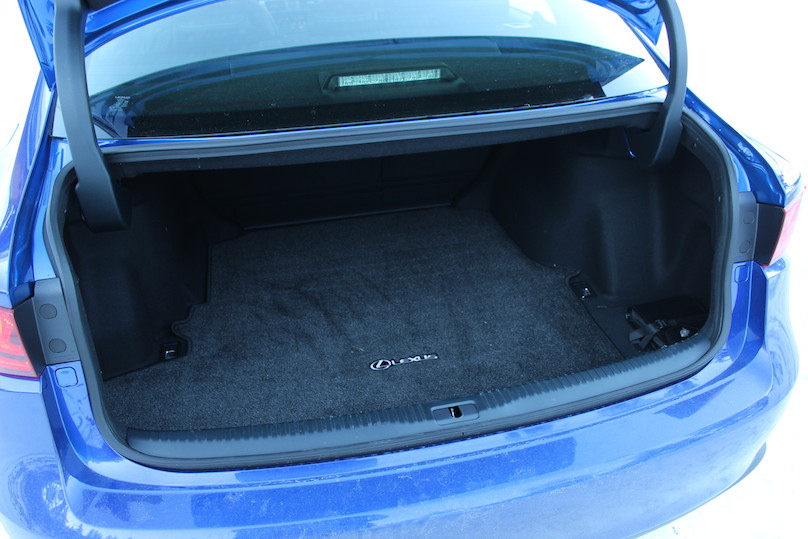 That space has to come from somewhere, though, which means that the rear seats are a little snug. There’s more legroom in both the BMW 340i and Mercedes-Benz C300, but there is a little more headroom in the IS than there is in both, which is nice.

Ski trips through adverse conditions are one thing, but the IS 350 is a sports sedan and so it should be athletic on the dry, too.

Of course, since our car had winter rubber on it there was always going to be a slightly mushier feel to the handling, but it was nowhere near as present here as it was when we did a similar test with the BMW 6 Series Gran Coupé. Of course, that’s a bigger car with a longer wheelbase so it’s not a 100 % fair comparison, but the IS impressed nevertheless.

It may have been my own bias that compelled me to think that the IS 350 should feel somewhat softer than the BMWs and Mercedes’ I’m familiar with, but either way, there was no denying that the F-Sport felt just as capable as those cars, if not more so. Yes, it helps the IS’ case that BMW has softened the 3 Series somewhat for this year, but with features like adaptive dampers, and well-sorted electronic power steering (mostly well-sorted; it’s a little heavy at slower speeds), I’m confident the IS would feel good regardless of what the competition was doing. This is a properly, well-sorted luxury sports sedan. It’s little wonder that it was the second-highest selling model in Lexus’ line-up last year.

We’ve mentioned the smoothness and refinement of the engine, but it would all be somewhat moot if the transmission wasn’t completely on-board.

It’s not a fancy multi-gear dual set-up similar to what’s employed by other manufacturers, but at least the ratios are well-spaced and the paddle-shifters make for a more involving experience. There are also four drive modes – Normal, Eco, Sport and Sport + — that modify the transmission mapping. The extremes are pretty noticeable, too; so much so that I avoided S+ most of the time, and ECO was reserved only for the maddest of rush hours.

There are caveats; the infotainment interface is one, and those tight back seats are going to be a tough sell for some, too—that’s for sure.

That’s really all there is to it, though. The Lexus IS plays in a competitive field, and the manufacturer has upped its game to the point where the car feels more German than ever before. That’s a good thing. 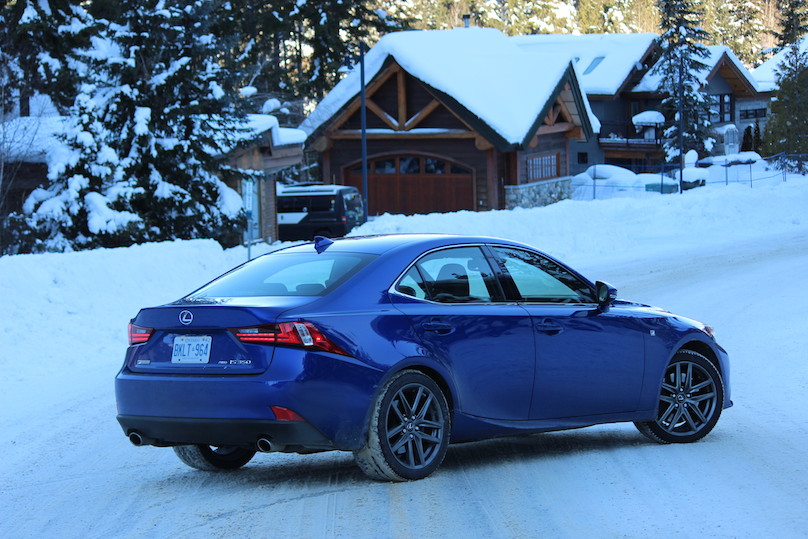