The 2016 Kia Sorento (EX V6 model shown) is now in its third generation with more muscular styling including the signature “Tiger Mouth” grille.

Black is the main colour of all three trim interiors. Needs some brighter colours or trim pieces

Kia’s decision to position one vehicle in two differing segments.

MOUNT TREMBLANT, PQ: As the 2016 Sorento enters its third generation, Kia has done something different by taking one model and positioning it in two segments.

Kia sees the base LX trim model as a compact CUV going up against the likes of Toyota RAV4, Ford Escape and the Nissan Rogue. Meanwhile, the mid-trim EX and top-trim SX models are seen as an intermediate CUV competing against Toyota Highlander, Ford Edge and Nissan Murano.

The LX and EX are sold as five-seaters, while the SX is the only version with seven seats.

On the five-seat models there is a quite large under floor storage area with compartments making it more like an organizer.

Roll Over Mitigation (ROM) and Cornering Brake Control (CBC) on AWD models have been made standard for improved dynamic control and safety.

The AWD system was developed with Magna International, having its world headquarters in Aurora.

It is hydraulically actuated with a normal front:rear torque split of 50:50. At highway speeds, the system sends up to 95 per cent of torque to the front.

In bad conditions such as ice, snow and lose surfaces there is a lockout button on the centre console that sends equal grip front and rear almost like four-wheel-drive. When speed increases beyond 30 km/h, the system automatically disengages.

Added to this is Kia’s Active Cornering Control (ACC) which is integrated into the electronic stability control. Here the ACC applies braking to the inside rear wheel for better cornering.

Also found on the centre console is the Drive Mode button that allows the drive to toggle between Normal, Eco and Sport, which modifies steering input, engine performance and transmission mapping. It does not adjust the suspension.

As you would expect, Normal is just that, while Eco delivers less fuel and adjusts ignition timing for improved fuel economy.

In Sport, more fuel is used and the spark timing advanced for more power.

For the launch of the 2016 Sorento, Kia selected Mount Tremblant with its picturesque chalets and resorts. It started with a drive up from Montreal on a day when there was alternating snow and blowing with the sun coming in and out of low cloud, making visibility a challenge.

I drove the EX five-seater with 3.3-litre which will probably be the volume model.

It’s a real highway vehicle, tracking straight and true through the slush and muck like it wasn’t there.

One of the Kia personnel told me he drove from Barrie to Mount Tremblant a few days before in a continuous snowstorm. He said it took 11 hours but the AWD system got him through with no real drama.

It was much calmer in Mount Tremblant when I got there, with minus 25 wind chill, which really didn’t feel too cold in full sun.

I also tried the 2.0-litre turbo (no 2.4-litre versions on hand) and the feeling of solidity was the same as in the V6.

This is due to the fact Kia/Hyundai is the only manufacturer with its own steel mill. Because they sell the steel directly to themselves, there is no middleman, so they use a lot more high tensile steel. Thus the reason why the Sorento feels like one piece, instead of a lot of bits welded together.

Inside, the instrument panel is very clean making it more functional. Backup camera is standard on all but the entry model. On the EX and up a heated steering wheel (my new favourite) is standard, as are integrated sunshade blinds on the rear doors.

The Sorento adds a new twist to smart cruise control on the topline SX+.

Like all such systems, the smart cruise can “see” a car ahead and slow accordingly. But when the car in front turns off the highway, in some vehicles, the system goes to full throttle to get back to the predetermined set cruising speed.

On the SX+ this speed can be modified so it does not lurch ahead and startle the driver and passengers.

During the press presentation, Kia pointed out it is currently the fastest rising brand on the planet.

It’s all part of the reason why more Canadians are looking at Kia in making a serious buying decision. 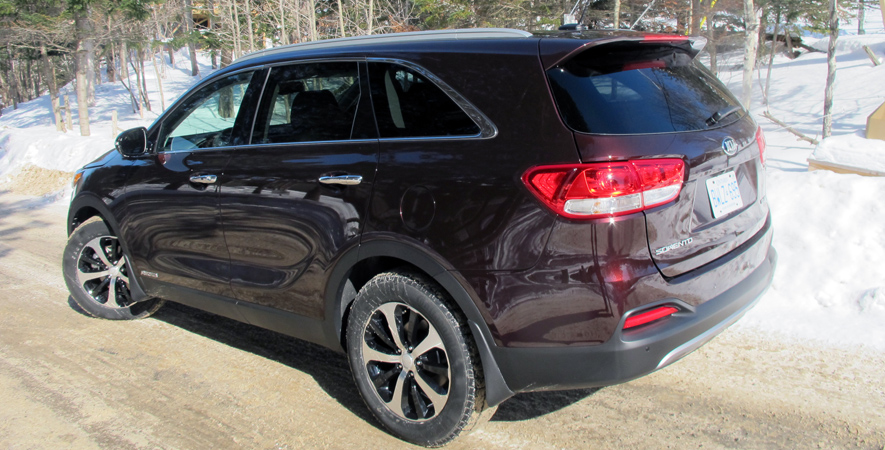