Over the past decade, the Kia Sorento has grown into what is arguably the most important vehicle that the Korean automaker sells in Canada. It is Kia’s bestselling vehicle in Canada with more than 12,000 units moved.

Over the past decade, the Kia Sorento has grown into what is arguably the most important vehicle that the Korean automaker sells in Canada.

The numbers tell the story. Through the end of October, it is Kia’s bestselling vehicle in Canada with more than 12,000 units moved.

With such a strong sales pedigree, Kia is expecting the all-new third generation Sorento will be just as popular with Canadian consumers .

In fact, since the launch of the second generation model in 2010, the Sorento has been either the first or second top seller for Kia in Canada, with no fewer than 10,000 sold per year. That’s pretty impressive for a vehicle, which as recently as 2009, had annual sales below 1,000 units.

Redone from stem to stern, the 2016 Sorento is longer, wider and rides on a significantly longer wheelbase than its predecessor. Interior space is the big beneficiary here, with overall cargo volume rated at 2,082 litres with an impressive 320 litres behind the third row. Under the skin, the Sorento rides on a stiffer, stronger platform. 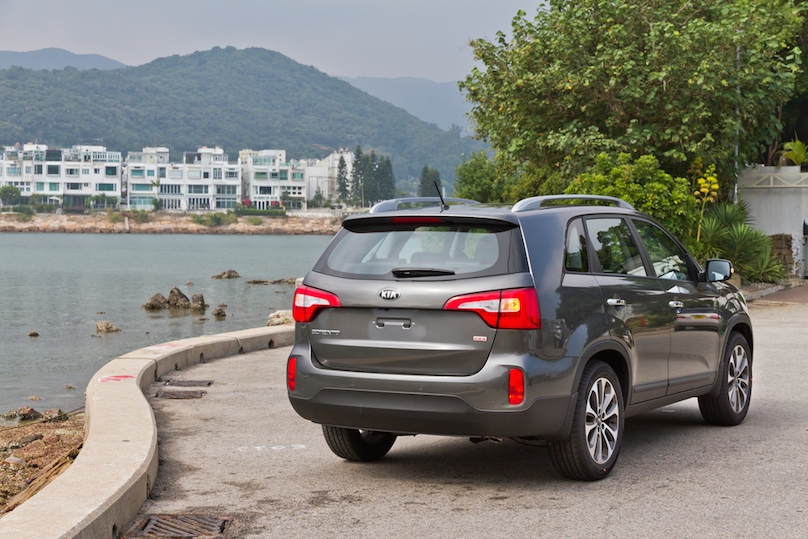 As was the case with the previous gen, the Sorento can be configured in a number of different ways. Four main trim levels — LX, LX+, EX and SX — offer a variety of options. Basically, the LX means front-wheel drive, 4-cylinder engines and five-passenger seating, while all-wheel drive, V6 power and seven-passenger seating comes at the SX end of the scale.

Speaking of engines, there are three: a 2.4-litre 4-cylinder, a new 2.0-litre turbocharged 4-cylinder and a 3.3-litre V6. The only gearbox on offer is a six-speed automatic.

My tester, a classy Dark Cherry seven-seater finished in black Nappa leather, sits at the very top of the price scale.

And the SX + V6 AWD is a true range topper — it comes with everything for one price. There isn’t enough space to list every bell and whistle, but I’ll make note of a few.

Under the hood, the 3.3-litre V6 produces 290 horsepower and 252 lb-ft. of torque. The six-speed automatic drives all four wheels. Power delivery is variable — the system sends power to the wheel with the most traction. A 4WD lock mode ensures a 50-50 front-rear torque split.

On the inside, things are pretty luxe. The aforementioned Nappa leather, heated and cooled front seats, heated steering wheel, 8-inch infotainment screen with navigation and a premium Infinity sound system are just a few of its many standard features. 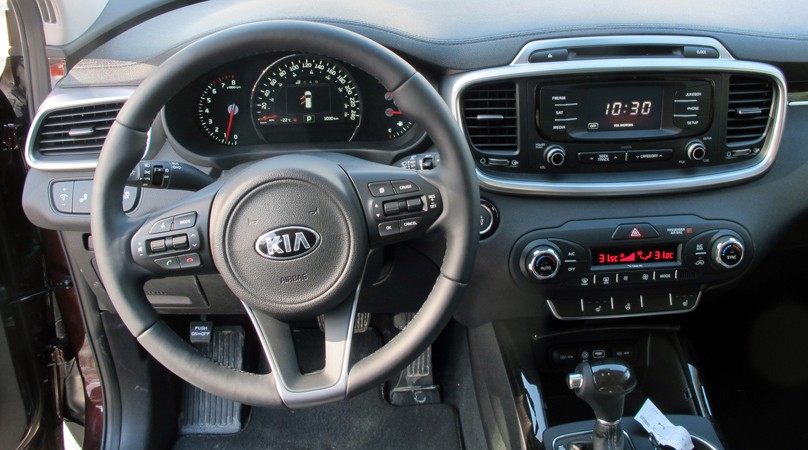 On the road, the structural reinforcements along with the smooth and powerful drivetrain make for a very comfortable and quiet ride.

During a week of mixed city and highway driving situations, my tester often felt like a tomb. Not only did I not detect a great deal of road and wind noise, I couldn’t hear the engine very much either, except when I had to step on the pedal to execute passing manoeuvres.

Observed fuel economy was pretty good too. I toggled the drive mode button on the centre console frequently between three settings (Eco, Normal and Sport) and still managed to average 12.5L/100 km.

Now, I didn’t drive it loaded down with passengers and a pile of luggage, but that number is still impressive for a seven-seat SUV, which weighs almost 2,000 kg and can tow 5,000 pounds when properly equipped.

In the end, there really isn’t much wrong with the Sorento. It’s a handsomely styled mid-sized SUV that comes packed with big helpings of content and versatility across a wide selection of trims.

One could question the strategy of pricing the top model just south of $50,000. After all, Kia isn’t a luxury brand. But with a high degree of premium content, it’s hard to say the SX + V6 AWD doesn’t deliver reasonable value for money.

What’s not: The sticker shock — this is not a cheap vehicle.

The Chevrolet Traverse has room for eight and more cargo space, but it’s pricier at the top end.

The Hyundai Santa Fe XL has the same powertrain and available space, but costs slightly less.