Hyundai hits the mark with the redesigned 2016 Hyundai Tucson

2016 Hyundai Tucson at a glance

Now available at dealers nationwide, the new Tucson is aimed at the “sweet spot” in the compact CUV/SUV market, ready to challenge the Ford Escapes, Toyota RAV4s and Honda CR-Vs of the world.

This is a section of the automotive market that has been growing by leaps and bounds. Instead of sedans and hatchbacks, buyers are now gravitating to CUV/SUVs, so much so that one in three vehicles now sold in Canada fits into this area.

In order to meet this perceived area of growth, Hyundai has completely redesigned and re-engineered the Tucson, its smallest crossover SUV, for 2016.

The new Tucson is longer, wider and more spacious inside than before, factors that Hyundai hopes will resonate with buyers.

It’s also perhaps the most stylish offering in the segment, something that should help get it noticed in a crowded marketplace that includes perennial best-sellers like the Ford Escape, Honda CR-V, Toyota RAV4, Nissan Rogue, Mazda CX-5 and Volkswagen Tiguan. 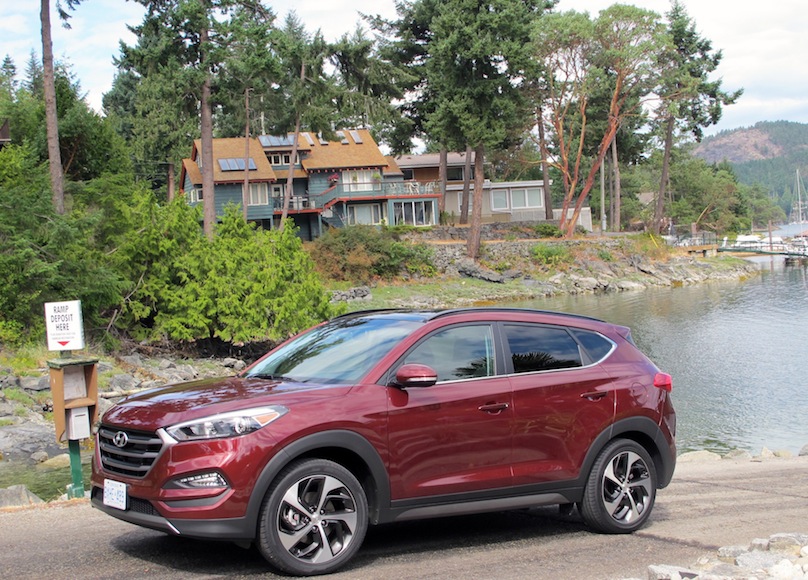 When you combine sales of the Tucson and the Santa Fe Sport, Hyundai already sits third overall in segment. With this updated model, Hyundai hopes and expects to move further up the ladder.

Once known as simply a manufacturer of inexpensive vehicles, the Hyundai of today brings cars and SUVs to the market that are among the best in the industry on the quality front.

In fact, Hyundai as a brand ranked fourth in the J.D. Power 2015 Initial Quality Study.

Consumers will also find that this Tucson has features that just a few years ago were available only on high-end luxury vehicles.

For example, a heated steering wheel and heated rear seats— both welcome here in the Great White North— are available on some models. Rearview cameras are standard throughout the lineup, while a dual level cargo floor, proximity power liftgate and ventilated front seats are options not normally found in this class.

Two four-cylinder engines are available on the new Tucson. There is a carryover 164 hp 2.0-litre engine mated with a six-speed automatic along with a new 175 hp 1.6-litre turbo that comes with a seven-speed dual clutch transmission (DCT). The 2.0-litre is available with FWD or AWD, while the 1.6-litre Turbo is only offered with AWD.

Drivers can select their own driving experience by choosing from Eco, Normal and Sport.

In the morning session, we got to sample the 1.6T in Limited AWD trim ($36,649). All 1.6T models get huge 19-inch alloy wheels and we found the ride a little less forgiving over potholes than with the 2.0-litre AWD model and its 17-inch wheels that we selected for the afternoon run.

But that’s not to say the ride is poor by any means. Hyundai engineers have stiffened up the new chassis with much more high strength steel, resulting in a 48 per cent improvement in body rigidity over the previous model.

Through the expanded application of structural adhesives and with a re-engineered suspension, the ride and handling are much improved this time around.

There was barely a straight stretch of road on our drive route as we meandered along the coastline of this beautiful area north of Vancouver.

On all accounts, the Tucson performed well, although we really didn’t get to test its AWD capabilities. The new 1.6T offers decent acceleration with a hint of turbo lag, but the bulk of sales are expected to be with the 2.0L models.

Braking is also strong as Hyundai says the vehicle comes to a stop from 96 km/h in 39.7 metres, better than the competition.

But one of the keys to success of the new Tucson will be its styling. From the hexagonal grille to its sculpted lines and LED running lights and taillights, this is very much a modern, up-to-date look that sets new standards in the segment. The new body is also more aerodynamic with the coefficient of drag reduced from 0.35 to 0.33.

The cabin, too, has a premium look and feel, although hard plastic is still in evidence.

That said, the seats are comfortable and supportive and the second row has more available legroom than before. The dash is well designed with an eight-inch touchscreen infotainment screen. Cargo capacity is 877 litres behind the second row seats.

This is also a quiet place as wind and road noise have been reduced considerably through greater use of insulation and noise dampening materials.

A gigantic panoramic sunroof is available, but the neatest feature is the power liftgate that pops up automatically if you stand behind the vehicle with the key fob in your pocket. We can see this being a popular feature for moms, trying to juggle groceries and toddlers in busy grocery store parking lots.

Overall, the 2016 Tucson is a much-improved offering over the outgoing model.