Bold, futuristic styling; even “base” model gets navigation

large D-pillar reduces visibility (but you get a rearview camera)

Safety tech that anticipates a collision

When the Murano launched back in late ’02, the look was revolutionary.

SUVs and crossovers back then were mostly boxy and boring, making this Nissan – with its slippery hood, wheels pushed to the corners, and rounded rear hatch over large-bore dual exhausts – a standout in terms of styling.

The second generation bowed in 2009, updating the look, but not taking away from the vehicle’s Murano-ness. It seemed anticlimactic after the company’s first bold move, but I can understand their reluctance to mess with a good thing.

But sometimes that’s what is needed, and this time Nissan – to their credit – tossed away their popular mould.

The all-new third generation Murano is a quantum leap from what preceded it, looking very much like the futuristic Resonance Concept that bowed two years ago.

I remember thinking at the time that when Nissan finally got around to building the Murano, all those complex creases and curves, not to mention the intricately sculpted fender/rear shoulder/D-pillar that supports the “floating roof” would be dumbed down into something more conservative and production-friendly.

I couldn’t have been more wrong.

Nissan stayed true to the concept, toning down very little. Signature elements like the V-motion grille, boomerang headlamps and taillights are featured prominently on an exterior that has few if any flat surfaces.

The new 2015 Nissan Murano is also longer and wider than its predecessor, and rolls on a set of standard-equipped 18-inch and optional 20-inch alloys, which nicely fill its large wheel openings.

Murano is considered to be Nissan’s flagship utility vehicle, so its premium look carries inside. Their design goal was to create a “social lounge” – a place you would want to share with friends.

The interior is bright and airy, with a dual panoramic moonroof included on all but the base front-drive model. Soft-touch materials are abundant, and vents, knobs and faceplates are surrounded by premium finishers. Surfaces are low-gloss and nicely grained, with no shiny, cheap-looking plastics. 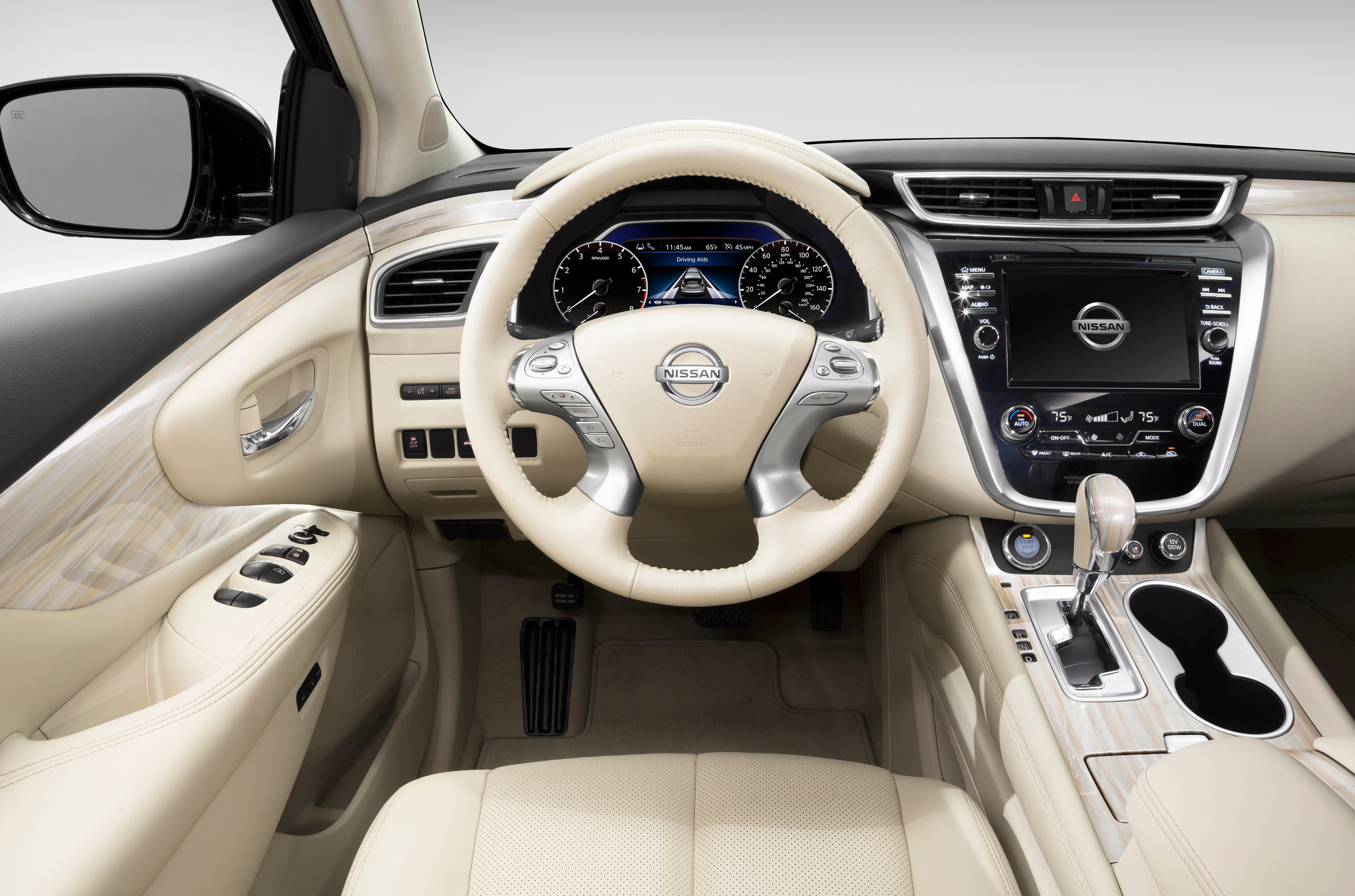 The wide, low centre console has a rear holder for smartphones and available rear USB so that all passengers can be “social” with their electronics. (Does anybody get the irony?)

Other nice touches include ambient lighting, and more importantly, “Zero Gravity” seating in rear – not just in front. Yes, back passengers will now benefit from cushy tushies, thanks to researchers who have found a way to ease the pressure points that normally have driver and passengers squirming after a few hours on the road.

Last November during my 4,000-km Route 66 road trip, I spent nearly 12 hours a day in these NASA-inspired buckets, and will solemnly swear they really do work.

Power comes from Nissan’s tried-and-true 3.5-litre DOHC V6 that delivers 260 hp and 240 lb/ft of torque. It is mated to an Xtronic CVT (continuously variable transmission) with D-Step logic that simulates the gear changes of an automatic.

I know it sounds counterintuitive, but this transmission behaves more “naturally” and lacks the rubber band feel that plagued so many early CVTs.

Plant the pedal, and the 2015 Nissan Murano accelerates smoothly and strongly off the line. Launch and passing aren’t neck snapping, but are competitive with anything in this segment.

Fuel economy for AWD models is 11.2/8.3/9.9 L/100km (city/hwy/comb) and a slightly better 11.0/8.2/9.8 with FWD. That’s pretty good for a two-ton vehicle, but with tweaks to the powertrain, along with an active grille shutter, underbody covers, low rolling resistance tires and loads of wind tunnel testing (to drop the Cd from 0.37 to a slippery 0.31), such thrift is indeed possible.

Nissan offers a Murano starting point just under $30K. Price for “S” trim with FWD is $29,998, and unlike some base models, this one isn’t screaming for upgrades.

Some of what I didn’t expect was dual-zone automatic climate control, pushbutton start, seven-inch display between the speedo and tach, eight-inch touchscreen navigation with rearview camera, NissanConnect infotainment and mobile apps.

The latter two features work together not only to warn you of an impending collision (by monitoring the vehicle ahead – and the one in front of it), but also by braking if you don’t.

Nissan has been on a tear as of late, with 17 straight months of growth, and an increase in vehicle sales of 26 percent – allowing the company to surpass the 100,000 mark for the first time in 2014.

It’s hard pointing to any one vehicle as key to their success, but I will note that Nissan hasn’t been content to rest on its collective laurels, waiting for their volume sellers to grow stale before replacing them.

Note I said “volume sellers.” I realize the just-replaced Titan and soon-to-be-replaced Maxima were a bit long in the tooth.

The popular Rogue, however, has been improved in every way, and now the Murano – a once fresh newcomer that arguably defined the crossover segment – has undergone the knife while sales were still riding high.

It’s a gutsy move, but I believe Nissan got it right – again – by not playing it safe. 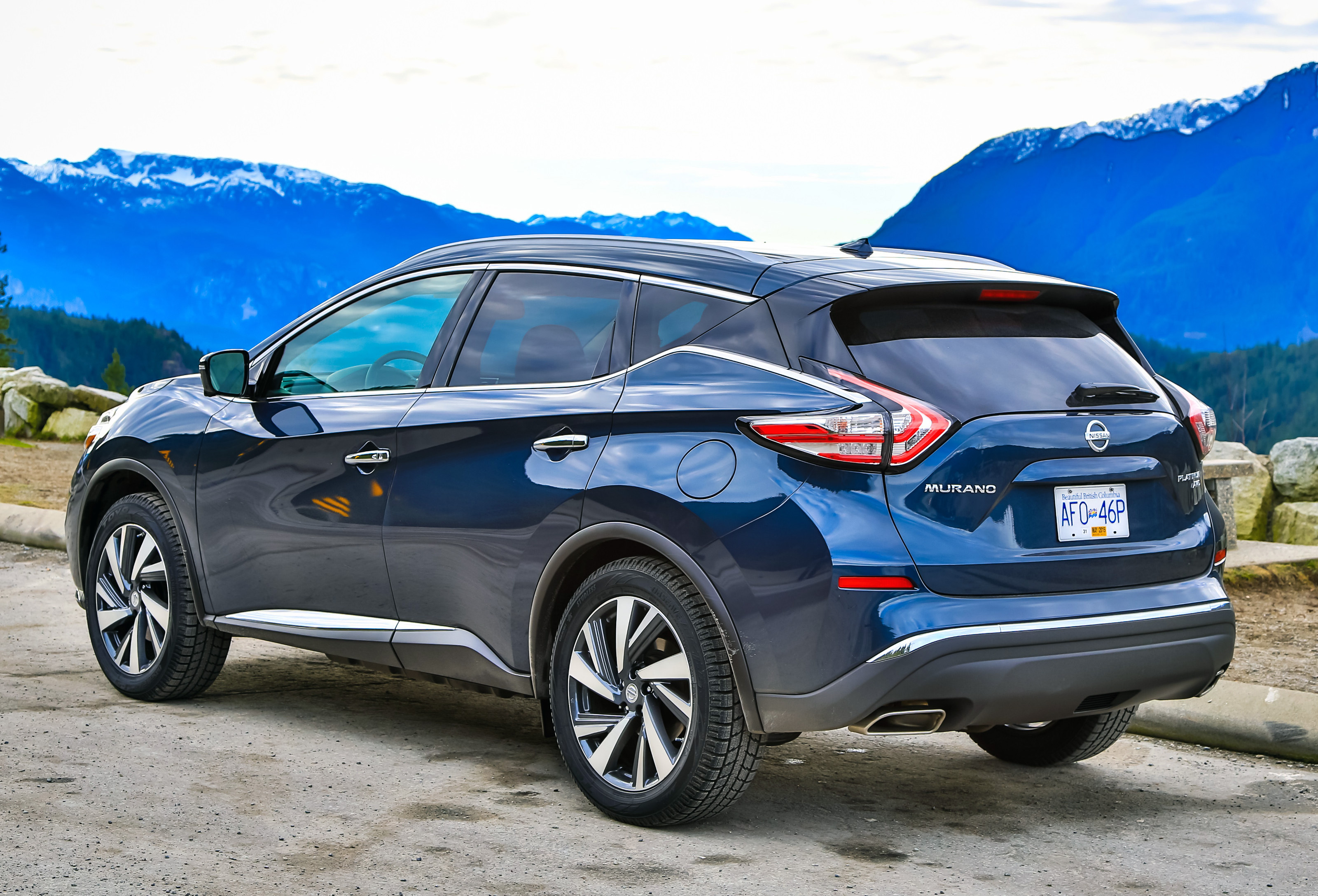