To showcase the 2015 Mercedes 4Matic AWD system, Mercedes-Benz brought a brace of B 250 and CLA 250 vehicles to the Olympic Basin in Montreal.

B 250 4Matic pricey for a compact people mover. CLA 250 4 Matic back seating is marginal. Navigation system takes a lot of practice.

Take your 2015 Mercedes 4Matic out and play in the snow.

BROMONT, PQ; Canadians have come to embrace all-wheel-drive and manufacturers have responded – a case in point the 2015 Mercedes 4Matic system.

The brand not only has the largest model lineup of the Europeans on sale in Canada, but it now offers no less than 91 per cent of its products with 4Matic.

This is not the mechanical AWD of old with heavy prop shafts and half shafts constantly revolving even when not under load, resulting in high mechanical friction as well as high fuel consumption.

Using electronics and sensors, 4Matic is surprising light at 70 kg with an electro-hydraulically actuated multi-disc clutch integrated into the rear differential. When the rear diff is open there is no drive, so 4Matic runs in 100 per cent front-drive.

As slip is detected, the rear diff closes and the rear wheels start to grip and this varies up to 50 per cent based on the severity of the loss of traction.

Torque can also be sent side to side. If only one wheel has grip, 4Matic can actually send torque to that single wheel.

To showcase 4Matic, Mercedes-Benz Canada staged a winter driving test in Quebec that highlighted its two “entry level” models, the B 250 and CLA 250.

The CLA and B Class share the same platform, engine and drivetrain, but are surprisingly different in approach and demeanour. What they share is the ability to handle Canadian winter and driving conditions.

There is also an AMG version of the CLA that is a giant killer if there ever was one and which I will leave until another day for a separate road test.

Here the emphasis was on how to use the advantages and technology of 4Matic to keep out of trouble when things start to go wrong on ice or in snow. 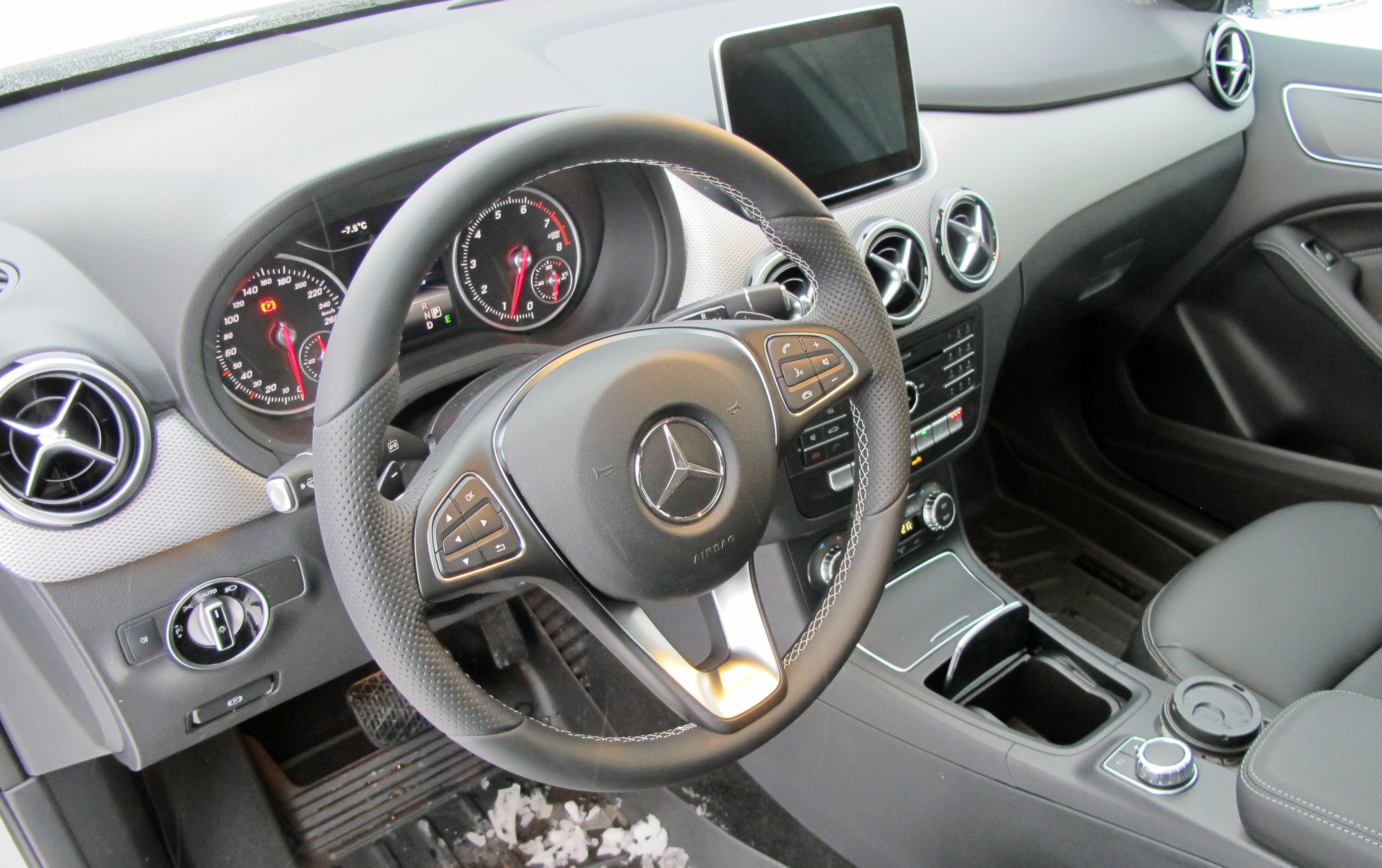 Braking effectively, not trying to over correct in a slide but work with 4Matic’s sensor array as well as looking at where you want to go, not where you are, were key messages, and I have to tell you, it was all a lot of fun.

My co-driver was new to all of this so I let her do most of the exercise, with lurid off course slides and walls of snow being thrown up. But this all lessened with each go-round, which showed the lessons had all sunken in.

From Montreal, it was off to Bromont followed the next day by the drive back to Montreal in a choice of B and CLA 4Matics in a variety of trim levels and there are a lot, so I won’t go into them all.

Road conditions were trickier then they looked with bare, dry, pavement on the crown of the two-lane roads. On the shoulders there was a mix of old snow and slush leading to ice-melted water down the centre of each lane.

Once we got off the main highway and started heading south to Bromont, the difficulty factor was increased by full sun reflecting off the surroundings.

I couldn’t actually feel 4Matic working because it is so transparent, but every once and a while, rounding an off-camber turn, I could sense grip at the rear moving away from the outside wheel.

The GLA, with its very slick styling, is a true European sports sedan and at a price attainable by many.

My partner and I had the Sport trim level with many extras such as the eight-inch centre infotainment system. The dashboard vents are circular and swivel to provide air anywhere, great for defrosting.

Coming back, we were in a base B 250 4Matic. It was not as lavish on the inside, but it sure made up for that in cabin space with 1,547 litres of cargo volume with the back seat folded.

The route back included a stop at the Abbey at Saint-Benoit-du-lac. Started in 1913. This beautiful monastery reflected the serenity of the Benedictine clergy who run it.

I was interested in the different persona of the B 250 as opposed to the CLA with the B 250 4Matic providing full family transport with the added extra of Mercedes-Benz materials and build quality.

And like the CLA, it was no slouch in the cut and thrust driving of Montreal traffic, with the power of the twin-scroll turbo coming on almost instantly when needed.

With 4Matic, Mercedes-Benz offers all-wheel-drive that is light, compact and responsive with a wide choice of models providing owners, whichever one they choose, a vehicle for all reasons, and, for all seasons. 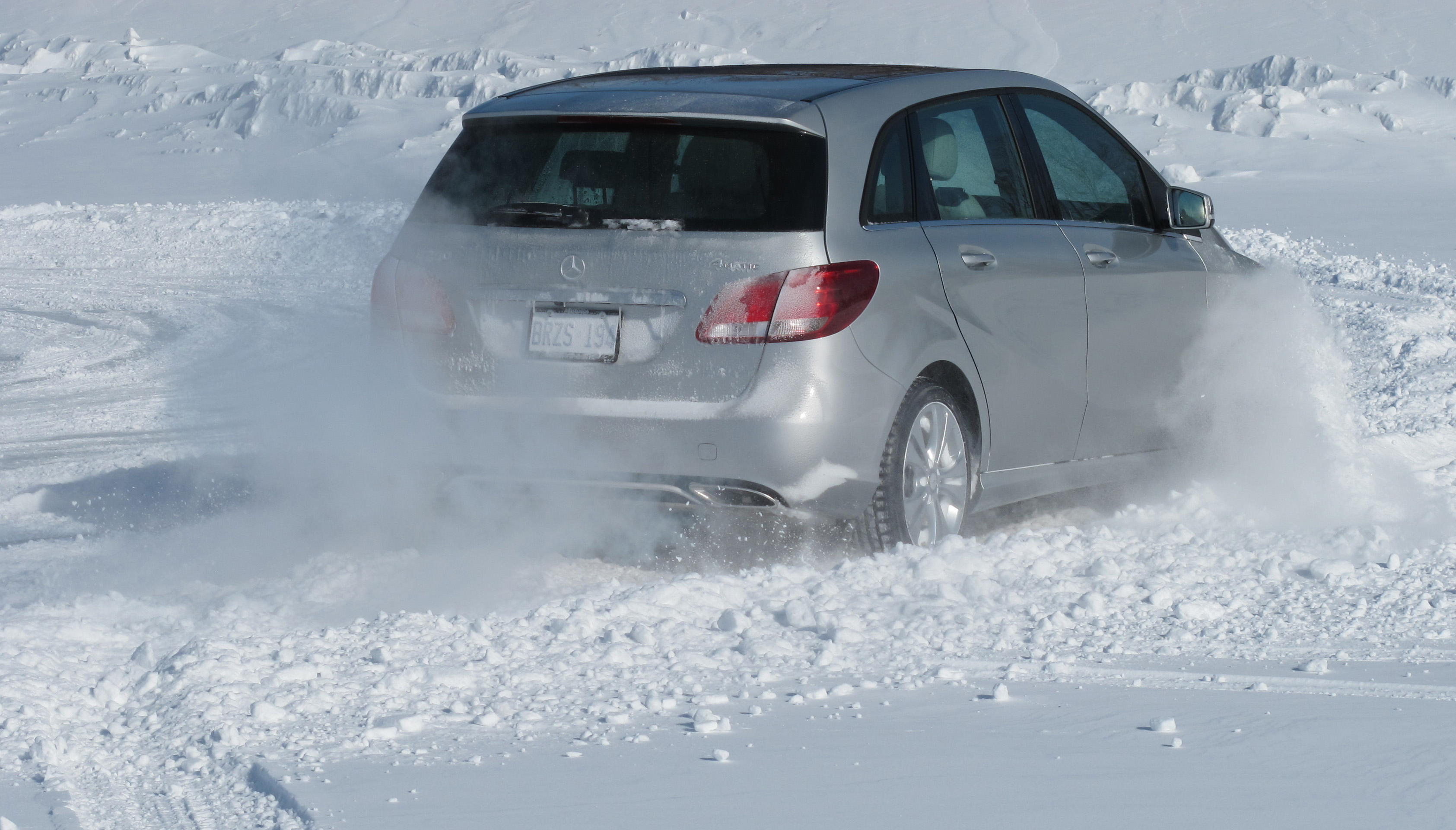