The 2015 Lexus CT 200h creates a bold first impression with its spindle grill, and with bottom corners pulled out to emphasize the car’s wide stance.

What’s Worst: Performance doesn’t live up to its looks

Kudos to Lexus for making its base ride such a looker.

The CT 200h, which debuted here in 2011, is not only an attractive entry point to the Lexus lineup, but an attractive vehicle by any standard.

This compact sport wagon is a hybrid that doesn’t look the part, sitting low and wide, with short front and rear overhangs and a bold first impression.

This begins with the new Lexus spindle grill, now pushed forward with bottom corners spaced widely, and its ‘pinch point’ positioned low to enhance the 2015 Lexus CT 200h sporty stance. The upper grille pulls back into slit-like projector headlamps that wrap around to the protruding front wheel arches.

The car’s muscular shoulders, high beltline and rear-sloping roofline nearly meet in back with a roof spoiler that caps its small rear window. Not great for visibility, but who cares when you look this good.

But it’s the CT’s eco friendliness that is both its weakness and its strength.

Let’s begin with the latter, which is fuel economy. Unlike some premium hybrids, the CT doesn’t use its electrics as a means to boost power for an already thirsty engine.

No, this hybrid system is more about saving the planet.

Like Prius, its power comes from a 1.8-litre, 16-valve DOHC Atkinson Cycle four cylinder with high-torque electric motor (combined 134 hp), but it has been optimized for Lexus. It feels livelier than in Toyota’s green motoring icon, but at the same time is no tire-shredder.

Acceleration varies from sluggish to satisfactory, depending on where you dial the drive mode selector.

Eco mode slams the gate on any fun, remapping the powertrain for a languid response which, along with a light foot, will keep the hybrid monitor (left of the speedo) in the “Eco” zone. Such good behavior is rewarded with soothing blue illumination over the gauges.

I’m sure the harried motorists behind you will understand.

Sport, on the other hand, dials it up with more voltage, a quicker throttle and improved mid-range power, along with swapping the hybrid monitor for a digital tach. Lighting transforms to a “naughtier” red.

Normal mode provides a compromise between the other two settings.

Unfortunately there are no paddle shifters to alter the CVT’s programming from its too-smooth linear feel to a more “natural” stepped gear experience.

Nope the shifter itself is a little console-mounted toggle that selects between drive and reverse. It works well enough, but I hope Lexus someday disables the annoying chime that dings the entire time you’re backing up.

EV mode allows you to operate on battery only for short distances – and under light throttle. Prod the pedal, and the gas engine kicks in.

Like most hybrids, and an increasing number of conventional rides, the CT employs start-stop technology. Take your foot off the gas or press the brake and the petrol engine shuts off. The electric generator creates resistance to reduce speed and recharge the battery.

These nickel metal hydride cells will keep the lights and everything else running while you’re stopped, and can even drive the CT in stop-and-go traffic. Which is why hybrids are as efficient in the city as on the highway, and according to Lexus figures, are up to 70 percent cleaner than gas burners and diesels.

Some may criticize the 2015 Lexus CT 200h for being “all show and no go.” That’s fair comment, considering its pocket-rocket good looks but humble powertrain.

Ride and handling, however, will not disappoint.

Electric power steering is precise and nicely weighted. Choose ‘sport’ mode and it’s tightened further, working nicely with the CT’s rigid body and sport-tuned suspension: MacPherson struts up front and a double-wishbone in rear – not a torsion beam like the Prius. All combine for better agility, less body roll in the turns and the ability to carve corners. Particularly in F-Sport trim, as tested. 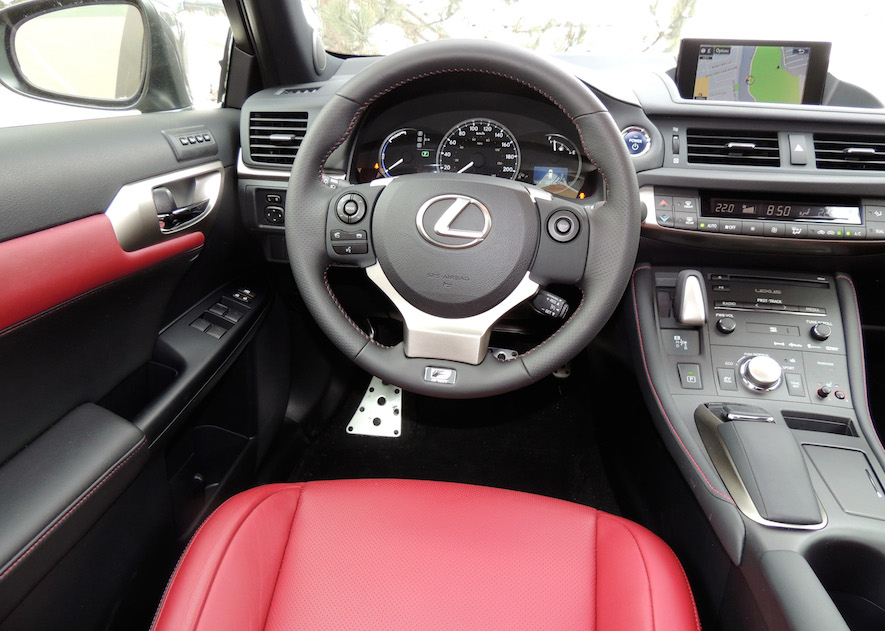 This places the company’s entry car north of 40-grand, priced near the V6-powered IS 250 with all-wheel drive.

But you needn’t spend this large on a CT, with plenty of standard features on the base car: 16-inch alloys, rear spoiler, heated power mirrors with integrated signals and puddle lamps, smart key with pushbutton start, dual-zone climate control, leather-wrapped tilt/telescopic steering with audio and Bluetooth controls, heated and power adjustable front seats and six-speaker audio with USB.

What’s interesting about the latter is its use of bamboo loudspeaker technology. A resin of bamboo fibre, plant opal and charcoal allow for super-thin speakers along with improved sound quality.

Trim levels like Touring ($34,250), Premium ($37,700) and Navigation ($39,300) expand the content list, topping out with my F-Sport tester that lives up to an often-repeated comment that Lexus interiors are among the best in the business.

The upscale look begins with available two-tone black/burgundy leather seating (with matching door inserts), nicely put together with red stitching that carries on in the doors, steering wheel, dash and centre console. Metallic and faux carbon fibre accents are a nice touch.

The stack, which includes audio and HVAC, is angled around 45 degrees, making for good ergonomics.

Upgraded Lexus audio is managed by both a mouse-style joystick and old-school knobs, and heating/cooling by simple buttons.

The passenger cabin is predictably tight in back, with minimal legroom unless front passengers are either short in stature, or willing to compromise. The 60/40 rear seats are otherwise comfortable, and drop to expand the 405-litre cargo hold. Thanks to the battery pack below, the loading floor is comfortably high, and sits level with the flat-folding seatbacks.

The CT 200h presents an odd value proposition: a tight-handling, fuel-sipping hot hatch without the heat.

That being said, it’s fun to toss around, stylish, practical and doesn’t punish at the fuel pumps. Making it no surprise that it was Lexus’s top-selling hybrid last year. 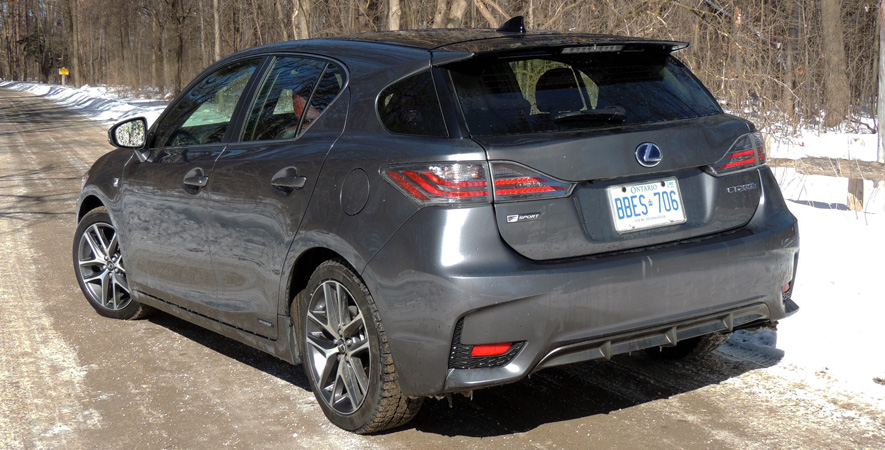 Here’s what you need to know about the 2021 GMC