The 2015 Kia Forte 5 SX comes with a powerful twin-scroll turbo engine with a choice of six-speed manual or six-speed automatic transmissions with room for five and 657 litres of cargo space behind the back seat.

What’s Best: Performance and utility blended together in a sharp look package.

What’s Worst: Back seat is a tight fit for most.

What’s Interesting: Power external mirrors that fold when the car is locked and then deploy and turn on a puddle light when it senses the approach of the driver with key fob.

Last year I drove the Kia Forte Koup SX and noted that it punched way above its weight in the compact sporty coupe segment.

Tested here is the five-door hatchback version, the 2015 Forte 5 which again is a surprisingly powerful package, but with up to 2,780 litres of luggage space.

The Forte was the first product of stylist Peter Schreyer whose “Tiger Mouth” signature grille and low flying roof line literally catapulted Kia from wallflower to belle of the design ball, winning award after award and raising Schreyer to Kia’s president, the first Westerner to lead a Korean company.

I remember meeting him in Quebec when the Forte was launched in 2009 and was struck by his candor, something absent in any encounter I had with a Korean auto executive prior.

I could go one, but let’s look at the 2015 version of the compact hatch.

As on the Forte Sedan and Koup there are three trim levels, a base LX, mid-trim EX and topline SX as tested here.

Standard transmission on the LX is a six-speed manual. A six-speed automatic is optional on the LX and standard of the EX. On the SX the manual is standard with the automatic as an option.

Standard on all automatics is Active Eco activated by a button on the steering wheel that automatically adjusts the engine and transmission control systems for optimal fuel efficiency. 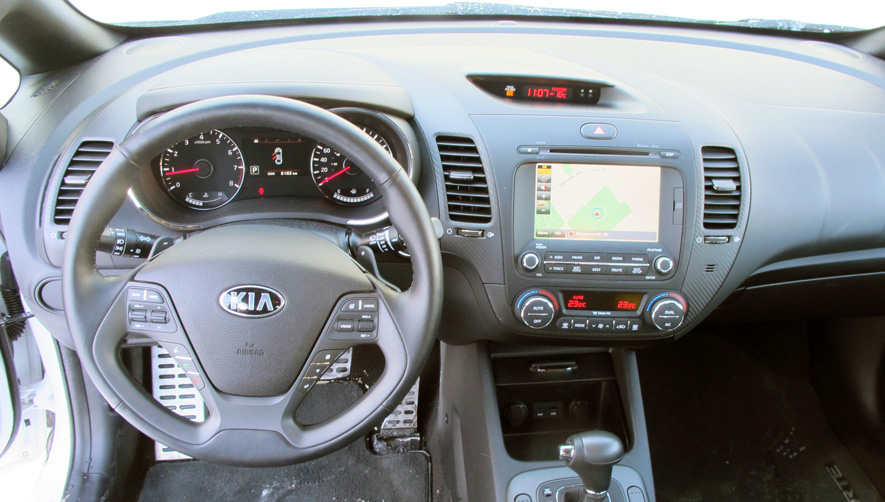 Push the button and the revs drop noticeably, while throttle response is just a tad slower. Turn it off and the power returns especially on the SX turbo as tested here.

Also found on the automatic versions is FlexSteer that enhances the electric power steering with a driver-selectable three modes – Comfort, Normal and Sport.

Normal is for everyday driving, while Comfort is for highway cruising. Sport tightens steering wheel response to improve handling.

One thing I learned last year when driving the similarly-powered Forte Koup SX is how speed quickly builds up if you’re not watching the speedo.

The 1.6-litre engine isn’t much bigger than a window air conditioner but this is a case where bigger does not mean better or more powerful.

With paddle shifters, you can use the Sportmatic automatic’s manual shift mode to the fullest.

From rest, pre-select first and at the moment when you hit the gas, make the shift into second until just before the redline and do it again all the way to sixth.

Even with snow tires (low profile), the way just about all of the useable torque got to the ground was amazing.

During my week with the Forte 5, we had one last dump of snow and this is where the sequential shift came in very handy when slogging down my unplowed street, being able to hold the car in second.

In Schreyer fashion, the SX is not adorned with spoilers and lurid paint job, making it a discreet pocket rocket for four, five in a pinch.

One thing that is deceiving is the size of the Forte 5.

It looks small on the outside, similar to many of its competitors like the Mazda3.

Because the Peter Schreyer styling results in a very low roofline and the windshield is so sweptback, you would never know it has the same wheelbase as the intermediate-size Kia Sorento/Hyundai Santa Fe five-seat CUVs.

My wife thought the Forte 5 was smaller than her Mazda3, but the numbers say otherwise. 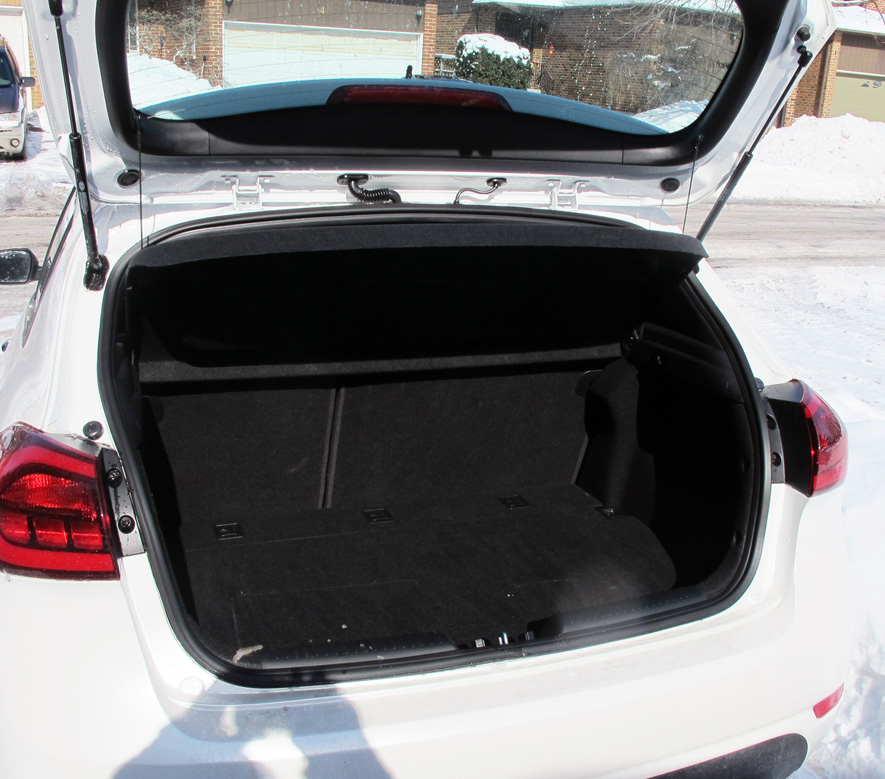 All Forte 5 models are fully-equipped when it comes to safety features such as four wheel disc brakes, ABS, electronic stability control, vehicle stability management even hill hold assist and a backup camera on most models.

What the SX does is add larger front brakes and sports suspension for a more taut feel when cornering.

When you stop and lock the SX, the power outside mirrors fold in, a feature found on high-end luxury cars.

But the really cool part is, when you approach the locked SX, it senses the smart key and deploys the outside mirrors to their normal position and turns on a puddle light on the underside of the mirror.

The SX is also the most lavishly equipped, the “Luxury” version as tested here at $28,795 (not including $1,485 shipping fee) featuring Xenon HID headlights, cooled/heated driver’s seat, heated steering wheel and even heated rear seats.

Nicely equipped, good on fuel and quick, the 2015 Kia Forte SX is perfect for the owner who has a family but who also just likes to enjoy motoring. 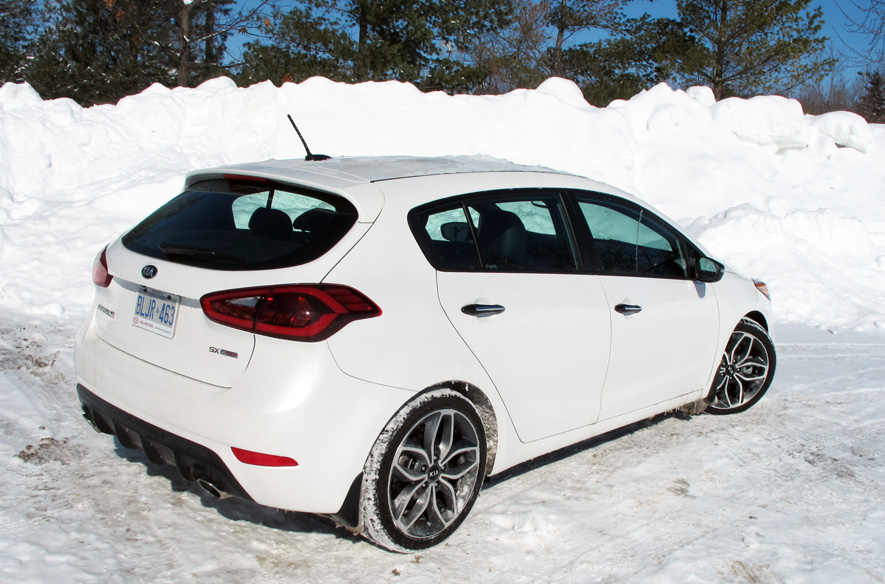