What’s Worst: No heated seats in base model (but you get heated steering)

What’s Interesting: Abundant technology if you have the time

BMW has long been the benchmark for premium sport sedans – in particular the 3 Series, which is still within reach for some of us ordinary folk.

There are worthy contenders like Mercedes-Benz C Class, Lexus IS and Audi A4, with the latter often considered as good a ‘driver’s car’ as the Bimmer.

I would argue there’s still another.

Infiniti may not have the pedigree of its European rivals, but its entry-level sedan – the Q50 – has the performance and handling chops to take on the best in its segment.

It debuted at the 2013 North American International Auto Show, going on sale here later that year.

This all-new model replaced the popular G sedan, and followed new company nomenclature that designated all cars with a “Q” and SUVs/CUVs with a “QX.”

Like its predecessor, the Q50 has a long nose, short rear deck and wide track. The look is athletic, but unlike the G sedan, it is more sophisticated, borrowing from the stunning Essence concept with its crescent-cut C-pillar, sculpted sides, and asymmetrical cabin layout.

The signature double-arch grille is flanked by wraparound headlamps that follow the contours of its pronounced wheel arches. This flows back into a distinct character line that breaks like a wave on the rear door, ending at the LED taillights.

Q50’s shape, however, is more than just eye candy, with aerodynamics playing a key role in forming the sheet metal. Drag coefficient is a slippery 0.26 to 0.28 (depending on model), and there’s zero lift front and rear.

The interior can be trimmed in available leather and wood, but my base AWD tester (starting price $39,950 plus options) wore leatherette, along with generous soft-touch surfaces and aluminum accents.

Instruments and controls are attractively laid out and ergonomically positioned, with some functions like climate getting proper switches, and most managed via the eight-inch upper and seven-inch lower touchscreens. The system’s large icons reside in an “App Garage,” where those of us who need reading glasses are apt to find them. 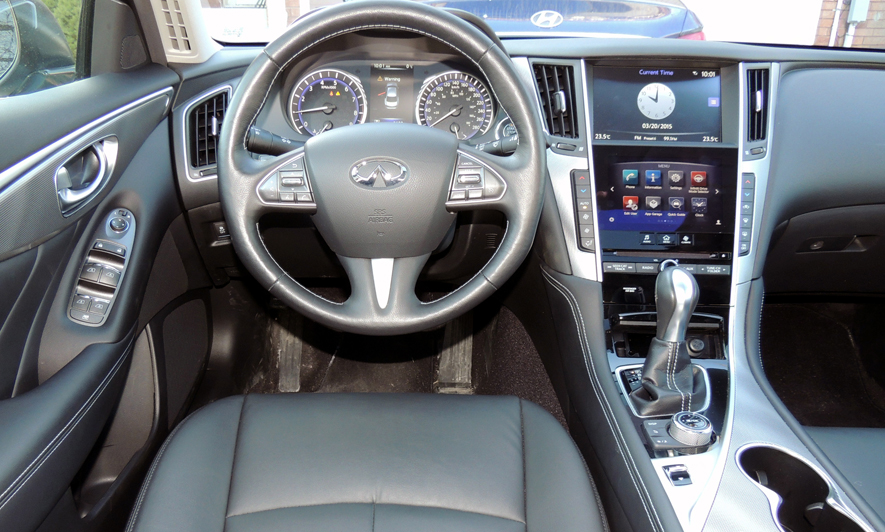 Features like leather, navigation, upgraded audio and Infiniti’s InTouch infotainment comes at a hefty premium: $47,450 for the AWD Sport. InTouch can be fully customized to your preferences for climate, audio, email, calendar and more.

One amenity I didn’t expect in base trim was heated steering. That’s typically an upgrade, but here it seems to have come at the cost of heated seats. I’m puzzled at the decision, with seat warmers often standard equipment in cars costing thousands less, but the folks at Nissan assure me it’s all about offering the Q50 at a “more accessible price point.”

Although toasty buns would have been nice, especially with this polar vortex hanging on throughout late March, all was forgiven when I took the vehicle for a serious run.

Power for the non-hybrid Q50 comes from the company’s proven 3.7-litre DOHC 24-valve V6, rated at 328 hp and 269 lb/ft of torque. It is mated to a seven-speed automatic with downshift rev matching and manual mode.

The Q50 is plenty quick with the drive mode set to “standard” and the autobox making its own decisions. Which is fine for everyday driving, but the fun begins when you toggle to “Sport” mode and slide the shifter left.

With a prod of the pedal, the Q50 reacts instantly, all four paws digging in to launch the vehicle towards its 7,500 rpm redline. Bump the lever and gears fire off rapidly – accompanied by an angry snarl from the exhaust.

I typically find these ‘manumatics’ to be a novelty that soon fades. Not so in this car.

The four-wheel independent multi-link suspension is pleasantly firm, allowing the Q50 to carve corners without body roll. Adding to the delight is an extremely rigid chassis and electric power steering that reacts instantly to driver inputs.

Indeed there’s no slack in the wheel, which may take some getting used to, but it leaves you feeling truly connected to the car and the pavement below.

The fully dressed Q50 3.7 Sport ($48,950) takes that up a notch with Direct Adaptive Steering. It’s an electronic “steer by wire” system that responds even more quickly and precisely than a mechanical setup, although there’s one on backup – just in case.

The Q has three more drive modes: Personal, Eco and Snow. I had no opportunity to test the latter, with nothing but dry roads all week (despite the frigid temps). And Eco, with its tepid throttle and early gear changes, was a real wet blanket compared to Sport. ‘Personal’ allows you to tailor throttle and shift points to your driving style.

I’ll admit to only a cursory look at Infiniti’s digital environment. One could do an entire review not only on the aforementioned InTouch system, but also on “InTuition,” which works with the smart key to recognize settings for up to four drivers: seat position, climate, audio, navigation and more.

But that’s not a review I’m about to write, as the Q50’s performance and handling had me too distracted to really play with the technology. 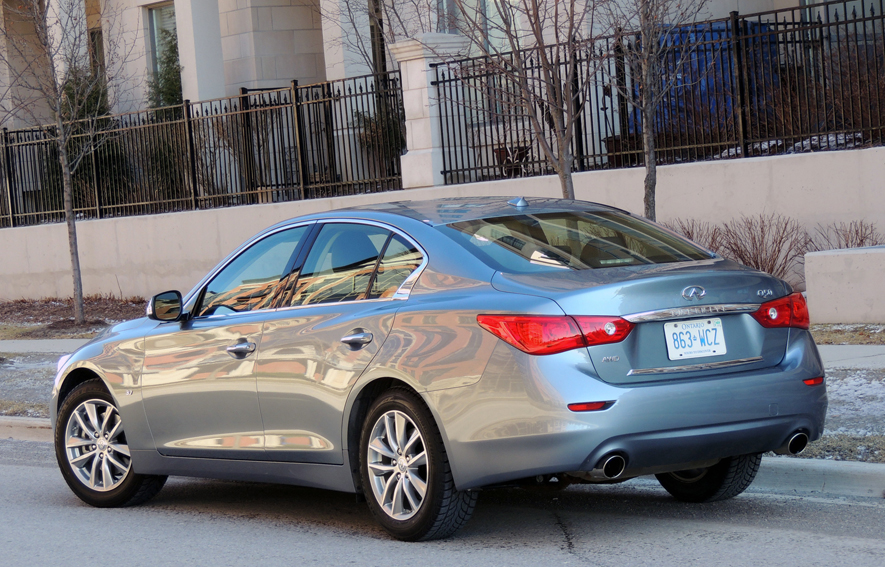