Full-size with full-content and standard AWD at a mid-size price.

An in-cabin sensor that monitors CO2 levels and pumps in fresh air so the driver doesn’t get drowsy.

MALBAIE, PQ: The 2015 Hyundai Genesis is a perfect example of how Hyundai looks at a segment, finds an opportunity and goes for it.

The Sonata and Elantra are now among the leaders in their markets, while the topline Equus is really starting to bring premium buyers over from the Europeans.

Then we come to the Genesis sedan that faces a slew of competition in the full-size luxury market.

What Hyundai did with the 2015 Genesis was make it as big or bigger than the mid-luxury Audi A6, Mercedes-Benz E-Class and Cadillac CTS, but price it against the entry-level luxury A4, C-Class and ATS.

But then Hyundai made its leading edge HTRAC all-wheel-drive system standard, as well as an available panoramic sunroof and the first model to use the “Fluidic Sculpture 2.0” design language – all designed to interest buyers.

The heart of the new 2015 Hyundai Genesis is its HTRAC full-time all-wheel-drive system developed over four years with Magna Powertrain, a division of Magna International with world headquarters in Aurora, Ont.

It is electronic as opposed to the hydraulic system used in the Santa Fe CUV, which was also on hand for a winter driving event in Quebec.

In Normal, torque split is 40:60 front to rear, which is also the default setting. In slippery conditions, 90 per cent of torque goes to the front wheels or up to 100 per cent to the rear wheels at higher speeds. When climbing hills, the torque split is 30:60.

Switch to Sport and the system sends torque back and forth as required to counteract under or oversteer. That split can vary from 20:80 to 10:90 per cent.

While all this is going on, the system also employs Active Cornering Control (ACC) which is integrated into the electronic stability control. Here the ACC applies braking to the inside rear wheel for better cornering.

Such a sophisticated and smaller AWD system allowed for a new platform with 38 per cent more high tensile steel.

Suspension is five-link independent at all four corners. Suspension travel was increased at the front and rear by five and 10 mm respectively.

Stopping power is provided by four-piston front brake calipers and 345 or 360 millimetre rotors for V6 and V8 models respectively.

Noise, vibration and harshness (NVH) was a mania with the engineers with details too numerous to list in this space. But some were two-stage semi-active engine mounts, a dual firewall and a full underbody cover that not only reduces noise but improves aerodynamics.

Besides the AWD, an eight-speed automatic transmission is standard. 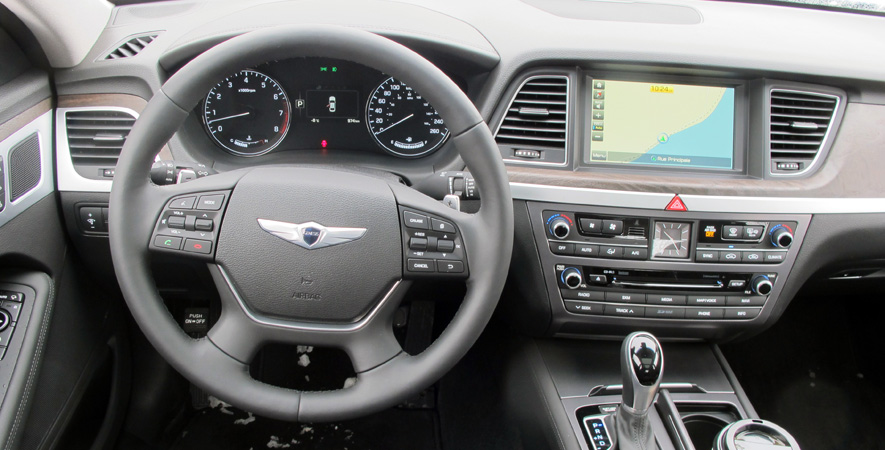 At the winter driving event in Malbaie, the driving portion coincided with an intense snowstorm – a perfect test for the HTRAC system.

My Montreal-based co-driver is one of the most knowledgeable winter testers in Quebec and he told me the first thing to do is not try to keep up with locals.

Part of our route was on Highway 138, which he described as one of the most dangerous winter roads in Quebec due numerous elevation changes while running near the St Lawrence River leading to sudden snow squalls and icing over.

Letting the locals by, including a Hydro Quebec truck doing an estimated 120 in a 90 km/h zone where I was doing 80 km/h, was the order of the day.

Every once and a while I could feel the rear getting a little lose when going through a curve.

My co-driver put that down to the fact the test cars were using standard alloy wheels with wide section snow tires. Due to the wider contact patch, the tires were starting to “float” on the changing surface. Area residents, he pointed out, all use skinnier steel wheels with high sidewall snows to cut down into the slush, thus their greater speed.

After the snow eased, tire adhesion increased and I picked up the pace, but with discretion.

Here I could tell the system was working overtime as we went back and forth from icy patches to dirt spread on the road instead of salt or sand to freshly plowed pavement.

Result? I couldn’t feel a thing, which meant HTRAC was doing the job.

And during that drive, the overall impression emphasized why AWD is well worth the extra cost when it comes to conditions such as I experienced in Malbaie.

An interesting item in the cabin is an industry-first C02 sensor under the glove box. It’s there because Hyundai engineers found CO2 leads to drowsiness when it exceeds 2,000 parts per million.

So they use the sensor and a new ventilation system to monitor CO2 and bring in fresh air when required.

Combining price, size and content, HTRAC AWD is icing (pun intended) on the cake, making the 2015 Genesis a very attractive offering in the full-size luxury segment. 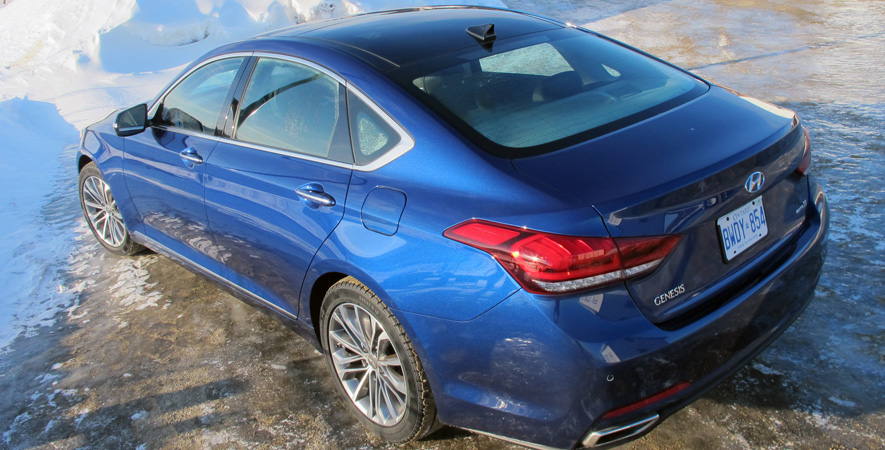