Topping the 2015 Ford Edge range is the Sport model that exclusively gets a 2.7-litre EcoBoost V6 with 315 hp and 350 lb/ft of torque that goes and sounds like a V8 under hard acceleration.

What’s Worst: Fiddly SYNC with MyFord Touch infotainment system is somewhat better than first generation, but still seems like a work in progress.

What’s Interesting: A 180-degree front camera with a flap that pops out than vibrates to deflect washer fluid on the lens.

PHOENIX, AZ: All new from top to bottom, the 2015 Ford Edge is poised to turn heads for those shopping in the intermediate CUV segment.

Built in Oakville, it employs a bevy of features such as inflatable outboard rear seat belts and a passenger under glovebox airbag – leading edge features you can expect to see copied by other makes following Ford’s lead.

The standard engine of the SE, SEL and, new for 2015, Titanium model is a 2.0-litre, DOHC four-cylinder with Ford’s EcoBoost twin scroll turbo producing 245 hp and 275 lb/ft of torque.

New to the Edge and only available on the Sport is a 2.7-litre DOHC V6 with EcoBoost producing 315 hp and a whopping 350 lb/ft of torque.

All models use Ford’s six-speed SelectShift automatic transmission with front- and all-wheel-drive available except on the Sport, which is AWD only.

Towing is rated up to 3,500 lb when properly equipped, but towing is not recommended on the 2.7-litre. 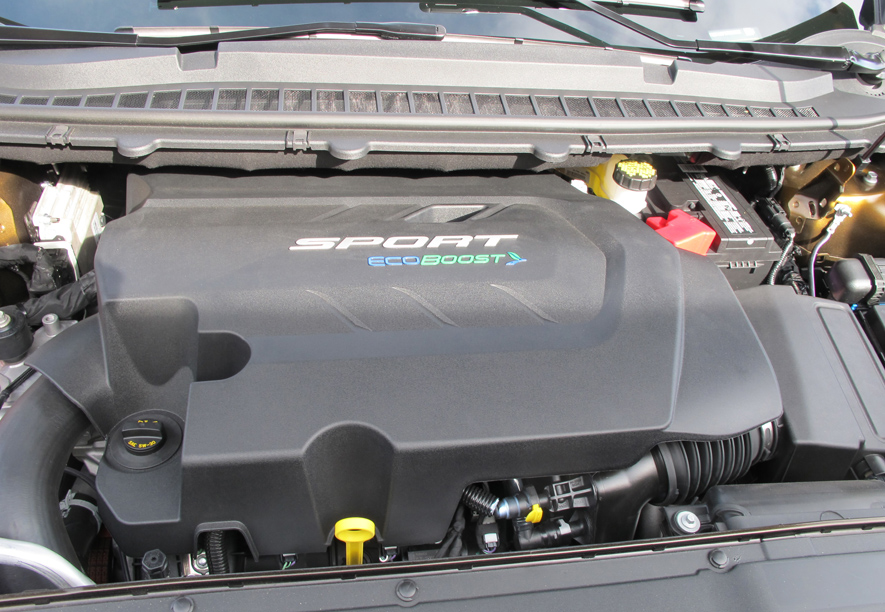 The new Edge follows the growing trend for vehicles to exceed the size of the segments in which they compete.

For instance, the Edge is considered to be intermediate, but looks larger in the flesh than the last generation Explorer.

Another indication is 39.2 cu ft of cargo space behind the second row 40/20/40 split seat, enough for manufacturers in some countries to pack in a third-row seat. Cargo space with the Edge second row folded is 73.4 cu ft.

I should have driven the 3.5-litre, but my usual co-driver and I connived with two other journos to secure the Titanium and the Sport. 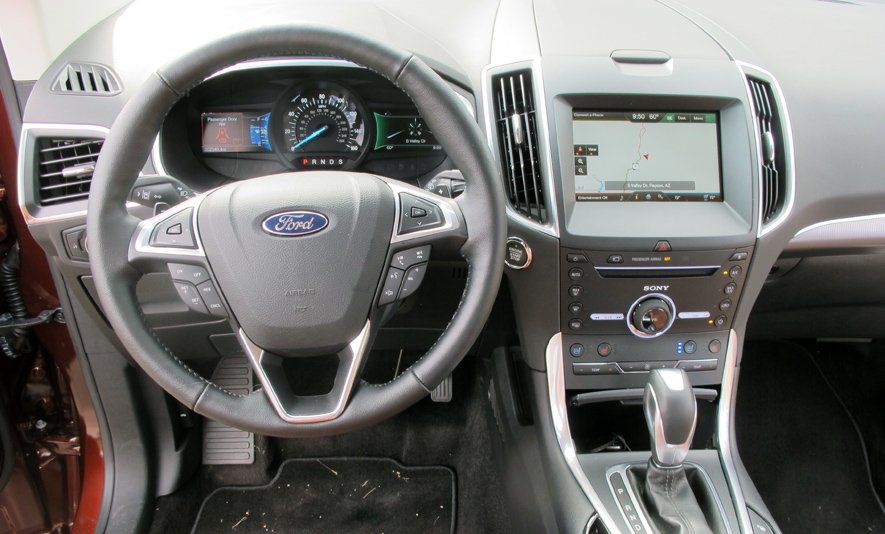 You actually sit quite high for a CUV and the mirrors are well placed to cover most of your rear view.

Yes, I know lane keeping, blind spot monitors and pre-collision technology are all there, but I still like to rely on my own eyes and senses rather than computers and cameras.

The route took us south of Phoenix and out into the desert where the roads are narrow and winding with lots of whoop-de-dos.

The front MacPherson struts suspension with a stout multi-link at the rear was very responsive to driver inputs made easy by Ford’s electric power steering.

According to Ford, there is a 20 per cent improvement in roll control and damping, with steering improved 30 per cent on the highway but reduced 30 per cent due to the electric power-assisted steering.

There was some tire nibble felt but that was more due to thin asphalt roads pounded into submission by the millions of RVs that are everywhere in that part of the world.

And those RVs proved a test of the 2.0-litre EcoBoost I was driving, with three adults on board and an AWD curb weight of 4,078 lb.

With only a few short straights, the trick to pass was to start your move about 10 meters behind the RV and hit the gas where the seemingly instant grunt of the turbo came in and propelled us by, literally as though we had a big-bore V6 under the hood.

With the 2.7-litre in the Sport, it was even better.

Pulled over on the side of the freeway to try and get the voice-activated navigation system to respond (it couldn’t understand the W in the W Hotel), I was trying out the back seat with my co-driver and a Ford official in the front.

My man hit the gas and that Sport took off from standstill like a small V8, actually pushing me back into the seat. 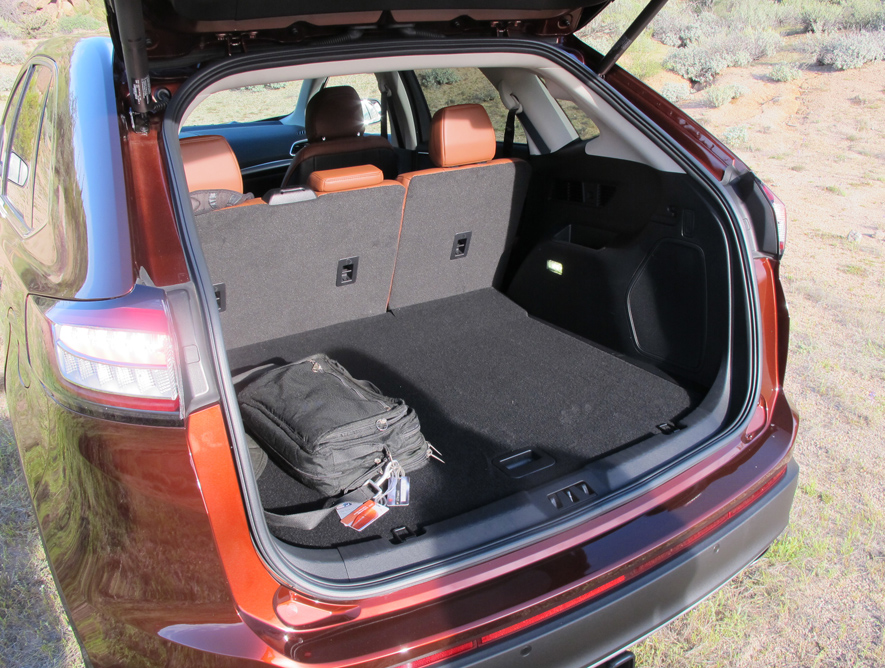 Thing was, it sounded like a V8 too, which I later learned was probably due to the fact only the Sport uses active noise cancellation and lets the “good” sounds come through the speakers in the sound system.

It was not a design objective, just a happy coincidence and a glimmer of hope for the future, as some of us thought a healthy exhaust note was a thing of the past thanks to sound-deadening turbos.

The suspension on the Sport is 15 per cent stiffer than on the base Edge and there is a host of features such as leather-trimmed sport seats with perforated suede inserts, aluminum brake and accelerator pedal covers, ambient lighting and metal-plated accents throughout.

One super nifty available feature is a front 180-degree view camera with a washer. A little square plate pops out and spray is directed at it so the water washes back on the camera lens. And then the plate wiggles to give a pulse-like stray to finished things off.

Looking at the trims and engines Ford has placed itself to offer a serious option to mid-size CUVs such as the Hyundai Santa Fe up to Lexus and Infiniti, which definitely gives Ford the Edge.

Lastly, a note on the build quality plus the richness of the paint which was near perfect and I was driving pre-production model, which says much about the calibre of work being done by the good men and woman of the CAW in Oakville. 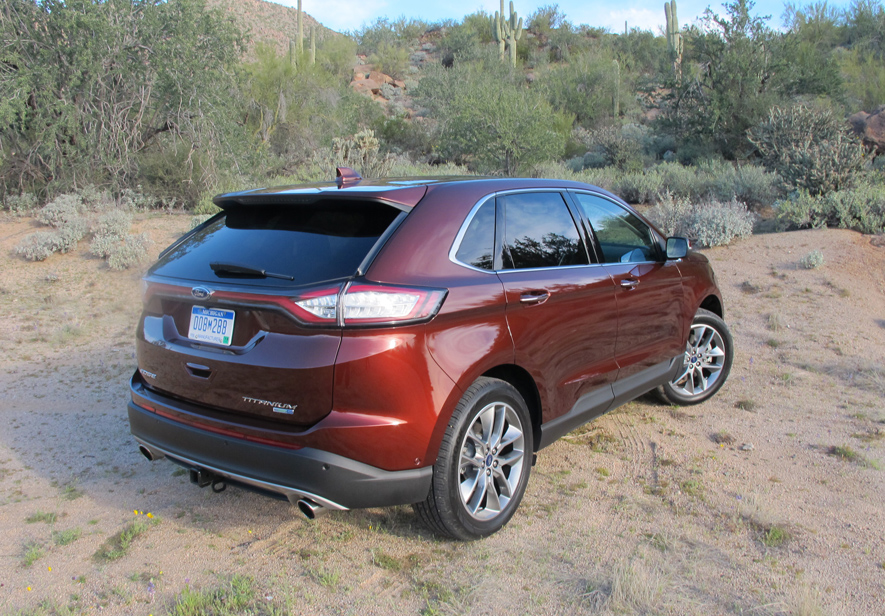