The new-for-2015 Charger offers not only a new face but almost every body panel has been revised or renewed.

The new Brampton-built 2015 Charger probably made a pretty picture, pulling out of the FCA Canada driveway all waxed and shiny, resplendent in red, actually a vibrant shade of Redline Tri-Coat Pearl, to be more specific.

I pushed down on the gas pedal and the engine moan began to build nicely, the power pushing me into the seat back and . . . wait a minute!

I’d been in a hurry, grabbing the keys, hopping in the new car and leaving abruptly without my usual “walk around of appreciation”. I was supposed to pick up a V6-powered model but I felt a twinge of doubt.

Had someone slipped me a Hemi V8 version instead?

The easiest solution was to pull over and pop the hood.

And, ahh, the 3.6-litre VVT logo was as plain as day on the Pentastar V6 engine shroud.

But can you blame me for my momentary confusion, what with modern V6 motors making the same kind of muscle as some of the Charger V8s of the past?

The Dodge Charger first debuted as a cobbled-together response to the Mustang and other muscle cars.

A more polished second-generation version took centre stage through the Bullitt and Dukes of Hazzard eras of the late 60s and early 70s.

But those glory days diminished through the energy crunch until the final ignominy of a small front-wheel-drive Omni-based Charger hatchback derivative, back in the 1980s. The ‘80s, just a generally all-round awkward decade, are probably best forgotten by everyone anyway.

The Charger was resurrected in roughly its current form in 2006. A seventh generation version followed a few years later with a new scalloped and indented coke bottle shape, a design shift that fans in opposing camps are still arguing about.

Get over it guys, because the Charger lineup has been renewed once more with a midlife revision for 2015. 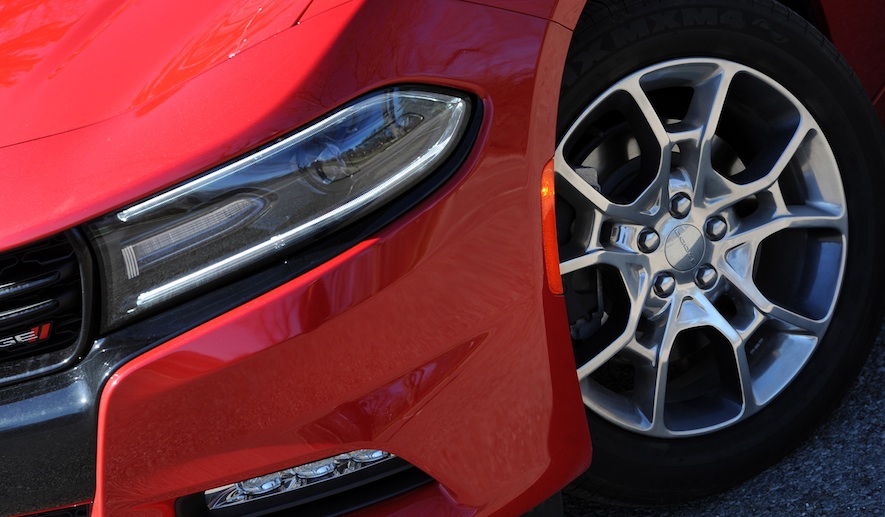 Inside, you’ll find eight all-new interior trim combos, a new three-spoke steering wheel with included controls and available shift paddles, a new seven-inch digital gauge cluster in front of the driver and a new instrument panel topping the centre stack with either an entry-level 5-inch touchscreen display or, in midgrade and higher trims, with the 8.4-inch Uconnect display with 3D navigation and downloadable apps. 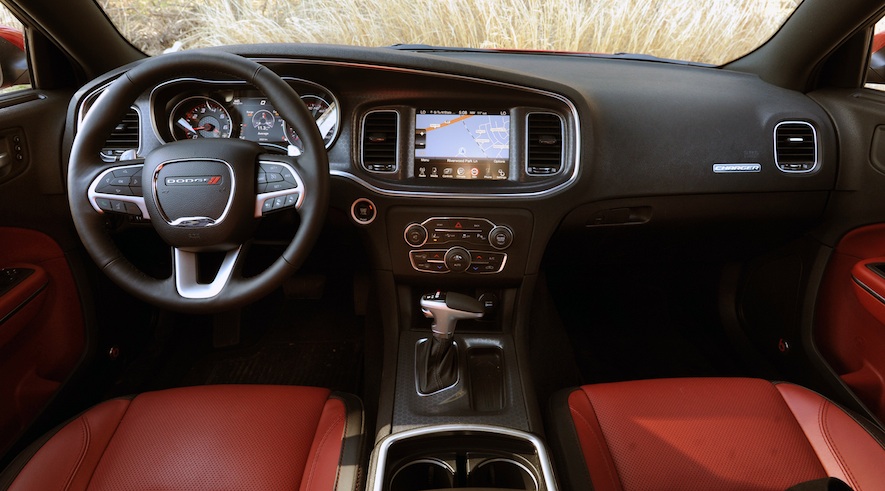 The SXT trim level, tested here, offers a classic Canadian compromise – adding the extra niceties we think we need without pushing the price too far out of reach.

The Charger starts well equipped, even in base SE trim, and our SXT bumps up the content with automatic air conditioning instead of a manual system and heated seats that include a power 12-way driver’s seat with 4-way lumbar adjust. 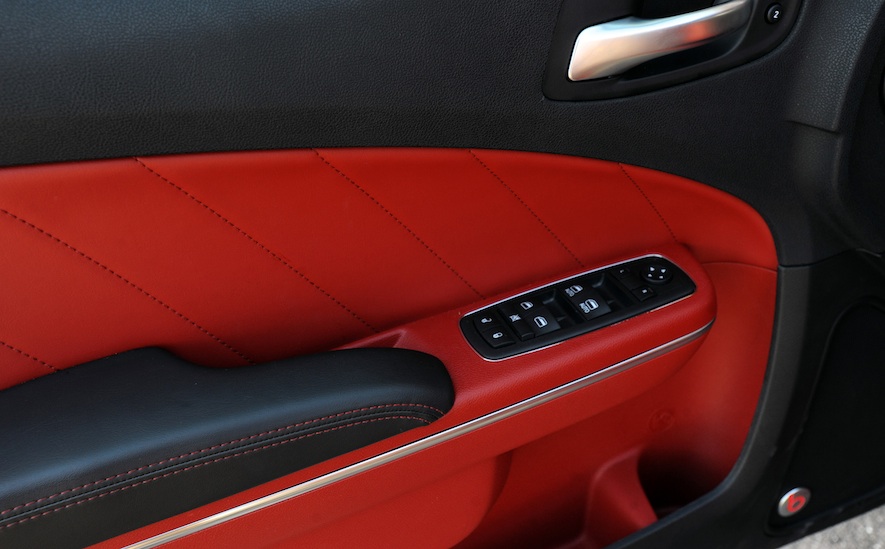 It also adds the 8.4A Uconnect multimedia system, upgrades the six-speaker audio with a 276-watt amp, and adds remote start; power heated folding mirrors along with other amenities.

The AWD does add about 100 kg to the curb weight but the fuel economy impact is mitigated by Chrysler’s automatic front-axle disconnect system, reverting the AWD into RWD in most no-load situations. My real world results worked out to 11.4L/100km (comb).

The Pentastar V6 makes more than enough power to satisfy most drivers, without getting into the power excesses and expenses of the optional HEMI V8s or the maniac muscle of the 707 hp Hellcat. 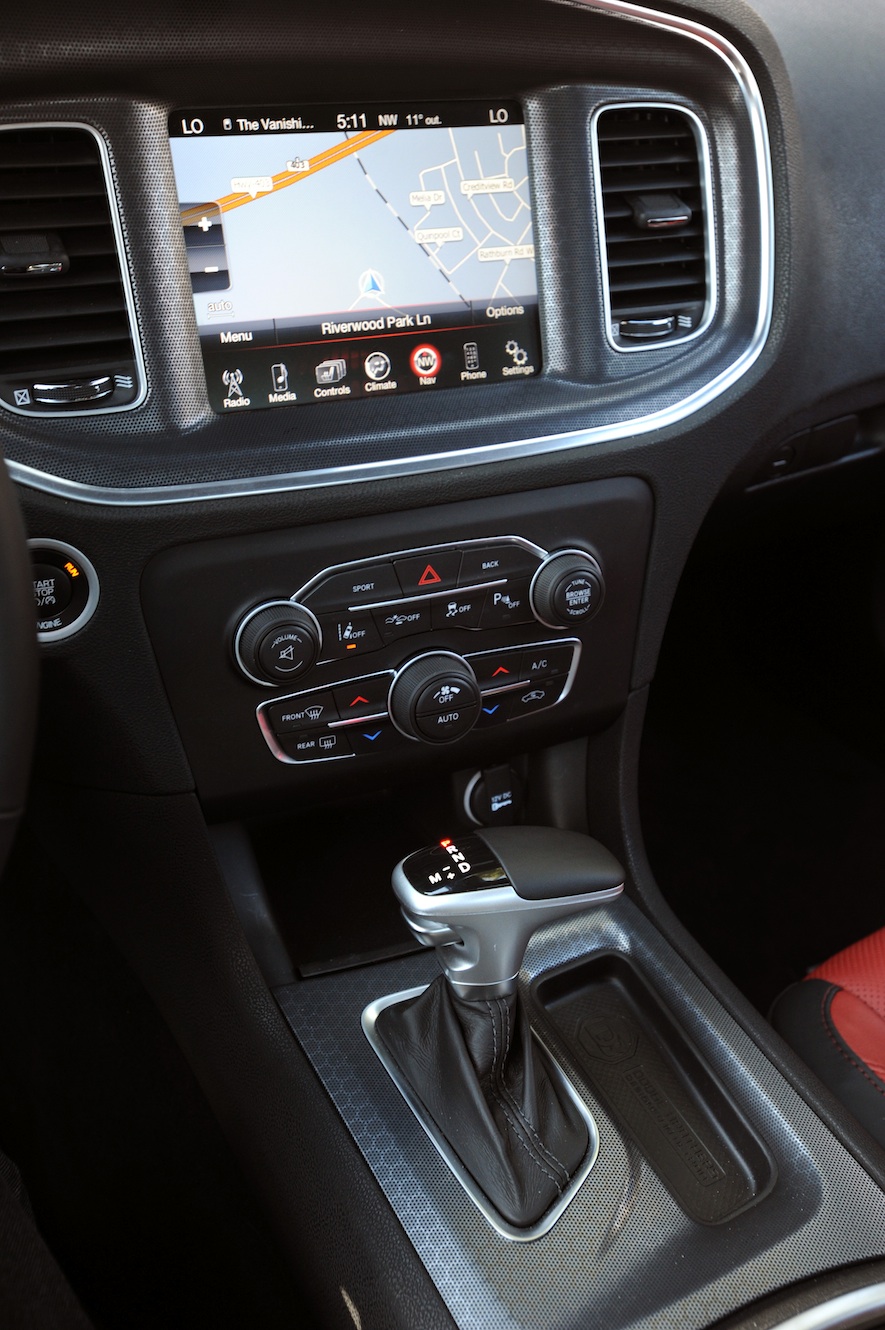 Our tester adds the Rallye Package ($495) which nudges the V6 power up a notch to 300 hp and 264 lb/ft of torque, courtesy of performance engine calibration and better engine breathing via cold-air induction and a sport-tuned exhaust. Not exactly the big step up to V8 power but the extra oomph, sound and fury may explain my initial powertrain confusion.

The big ticket option on this SXT tester is the AWD Premium Group ($5,295) which, along with the all-wheel-drive adds a long list of extras including GPS navigation, Park-Sense Rear Park Assist, auto high beam HID projector headlamp arrays, an upgraded 552-watt Ten Beats audio system, a heated power tilt/telescopic steering wheel and power heated/ventilated front sport leather seats and heated second row which, along with the rest of the interior, came wrapped in a new ruby red and black combo that matches the exterior perfectly.

It all pulls together to make this a very complete package, even in this midrange trim, with ample room for five full grown adults, plenty of cargo space, enough performance Jones to please, and a slate of technologies and amenities that should placate even the pickiest of passengers. 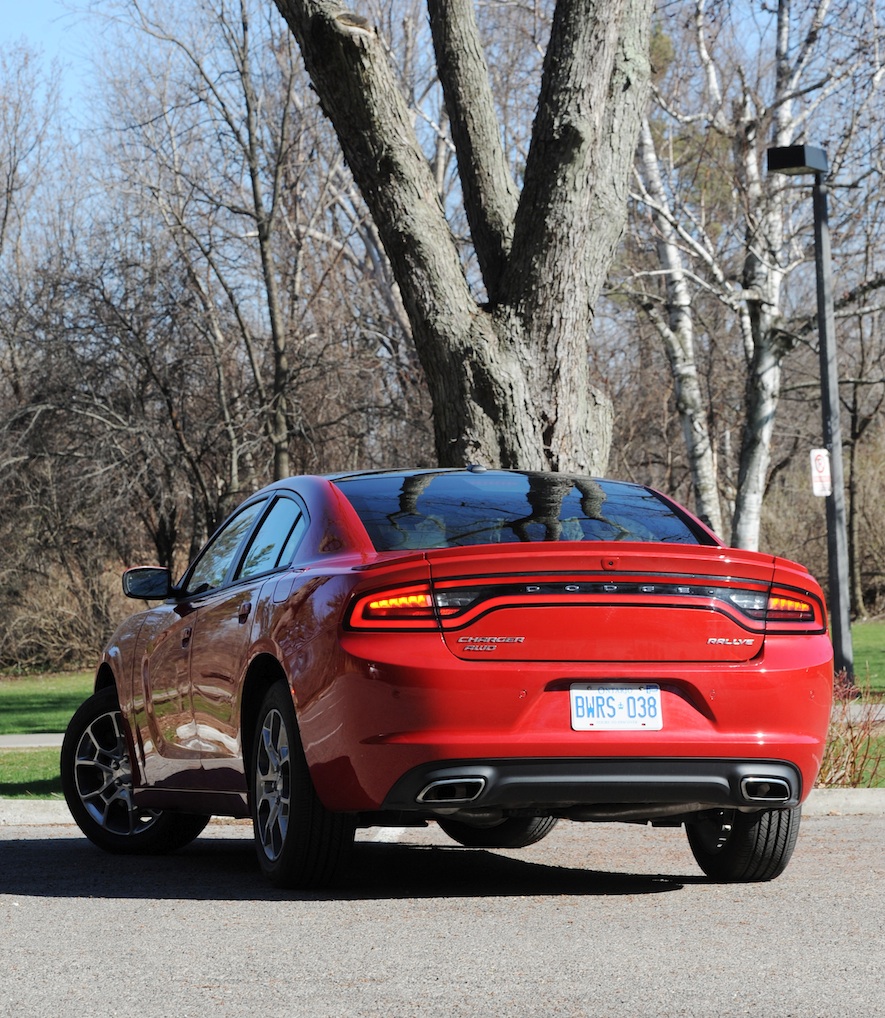 We can argue about the cachet of import sedans compared to domestic designs but this made-in-Canada Charger, along with its Chrysler 300 sibling, leads the pack when you compare sales numbers of competitors like the Toyota Avalon, Ford Taurus and Chevrolet Impala.

That’s mainly because the 2015 Dodge Charger offers value and a wide selection of performance variants, price and packaging choices to suit any customer.

And, with new-for-2015 levels of included and available technologies, the Dodge Charger pushers the bar higher than ever, maintaining its muscle car flavour while setting a new standard for full-size sedans.