The 2015 Chevrolet Suburban (LT model shown) fits the definition of what a full-size SUV should be.

The ability to handle just about any cargo/utility/towing situation that might arise.

When fuel cost climbs back up, and it will, operation can be expensive.

How a vehicle 18.5-feet long and weighing more that 2.5 tons is so easy to drive, steer and handle.

Full-size trucks such as the 2015 Chevrolet Suburban are the lifeblood of GM Canada.

When I did the first drive of the new Suburban and its kissing cousin, the GMC Tahoe, back in the summer of 2014, I was told some interesting statistics.

Chevrolet accounts for 60 per cent of all GM vehicles sold in Canada. And of those Chevrolets, 60 per cent are trucks.

Chevrolet and GMC full-size SUVs represent 70 per cent of all Canadian sales in their segment.

That is a big chunk of business, so the re-design of both brought several challenges to the engineers — chief of which as trying to make something as big as a Suburban drive and feel like a smaller truck.

Body-on-frame has many advantages, but some disadvantages as well, one of which is body shake as the truck gets older, leading to a perception of sloppy handling.

To change the driving dynamics, hydraulic engine mounts were redesigned for more isolation and torque damping and there is now electric power steering. The former gives what Chevy calls a “connected to the road” feeling, while the latter really takes a lot of effort out of low-speed turning and parking.

The body is connected to the frame with new mounts to reduce body shake, while the tires were designed for better ride quality but also improved stopping power and fuel economy. The body is also stiffer with front-end rigidity increased dramatically.

In terms of making the Suburban handle better, Suburban rides on a new, tuned coil over shock design with forged aluminum control arms that are 25 per cent stiffer than before.

Available in rear- and four-wheel-drive, mode selection is wonderfully simple with a rotary knob to the left of the steering wheel for 2WD, Auto, 4Hi and 4Lo. And right beside that is a trailer brake adjustment. The 4WD version is by far the biggest seller.

With all that weight you’re towing, braking is important and the Suburban comes with GM’s DuraLife disc brakes with a hardened and strengthened surface to reduce corrosion. GM claims they can last up two twice as long as conventional rotors and provide quieter braking with less vibration.

Tested here is what I would consider to be the volume model, the mid-trim level LT with 4WD.

The interior got a big makeover for 2015 with cockpit style front seating, impressive MyLink connectivity with five USB ports and one SD car reader, a centre console that can swallow a desktop computer and, best of all, fold flat power third row seats with power liftgate. Standard seating is 2/2/3, but a second row bench is available. 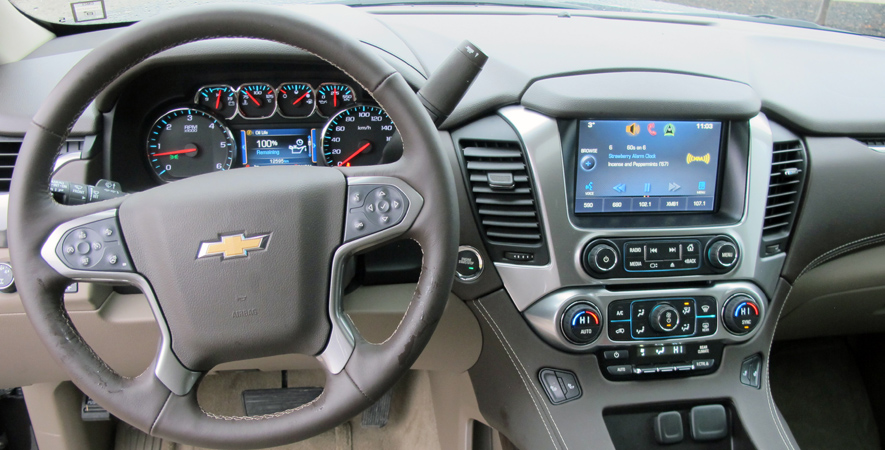 Fitted with the trailer towing package and the heavier suspension while perched up on optional ($1,540) 20-inch polished aluminum wheels, you would expect this truck that is longer than some single car garages would be like steering the Queen Mary.

Having also driven the 2015 GMC Yukon Denali and Cadillac Escalade, I was once again surprised by how little effort was needed to drive the Suburban.

Climbing high up into the cabin, or more correctly climbing down and getting out, was about the only challenge, with great sightlines thanks to the elevated seating position and well placed outside mirrors.

Another thing is road noise, or actually lack of it. Part of the design of the exterior features doors imbedded into the body, which makes for better shut lines but also less wind rush.

But what stands out most of all is the amount of seating room to really stretch out in. Because of its width, the centre aisle to the third row is easy for anyone to walk through.

Do you really need 4WD or AWD? Just look at winter in the eastern half of Canada so far and that question has already been answered.

That’s a lot of money but LT 4WD is a lot of truck that starts to justify its price when you consider it is probably good for a decade of service and with great resale after that.

And having said all that, the 2015 Suburban is right for a large number of Canadians as shown by the sales numbers which keeps it a perennial favourite. 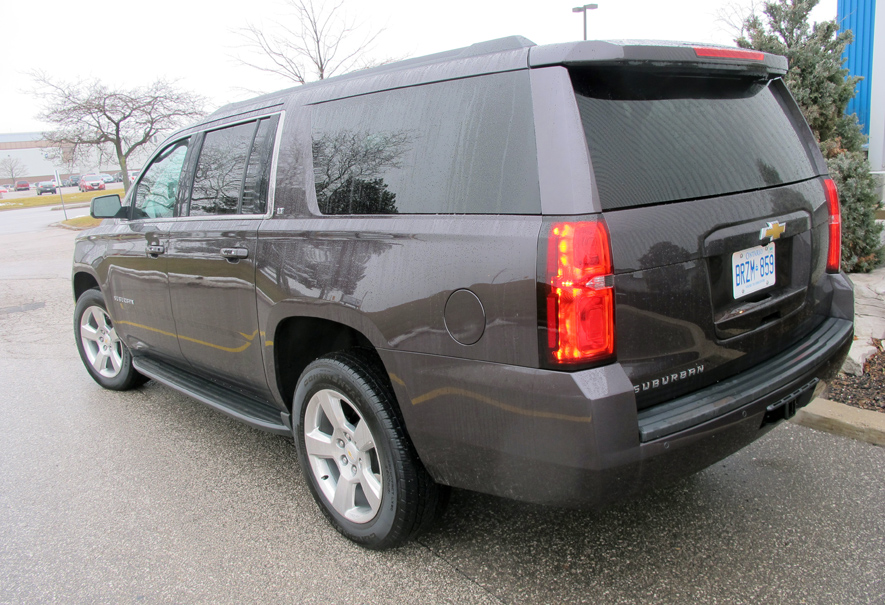