The 2014 Mazda 3 has a bold new look to go along with a number of technological upgrades. Sedan and hatchback versions of this popular compact are available.

There’s a lot to like about the restyled Mazda 3 that continues to be the best-selling model in the Mazda lineup.

The 2014 Mazda 3 is fun to drive, has exciting new styling and top-notch interior.

On another note, the smaller 2.0-litre engine struggles at times and the six-speed manual not available with 2.5-litre engine.

2014 Mazda 3 gets a new look and SkyActiv technology in its latest generation.

The Mazda3 has been has been a hit since it replaced the Protégé in the Mazda lineup in 2003.

Now for 2014, the third generation has bowed with a new look and Skyactiv powertrains that are more fuel-efficient and yet more powerful at the same time.

While other manufacturers have moved to turbocharging their smaller displacement engines, one of the keys for Mazda with their Skyactiv program has been weight reduction throughout the vehicle.

The hatchback adds $1,000 to each of these trim levels.

Both the 2014 Mazda 3 sedan and hatchback models were finalists for AJAC’s 2014 Canadian Car of the Year honours, however top spot went to a Mazda stablemate, the redesigned Mazda6 mid-size sedan.

The Mazda 3 has always been a driver’s car and the new generation has even more “zoom zoom” than ever before.

GX and GS vehicles are equipped with a 2.0L DOHC four cylinder that produces 155 hp and 150 lb/ft of torque – an increase of 7 hp and 15 lb/ft over last year’s base engine.

I’ve spent more time with the 2.0-litre engine and find it ideal for most driving situations, although you do encounter the odd time when you’d like just a little more oomph for passing. With the 2.5-litre engine, you gain in performance, but lose slightly in fuel economy.

The redesigned Mazda 3 is the third in Mazda’s new generation of products that adopts the KODO “Soul of Motion” design theme, following on the heels of the Mazda 6 and the CX-5 crossover.

This new design language has produced a Mazda3 exterior look that is more sleek and curvy.

The sedan’s overall shape is athletic with a long front end, compact cabin and short rear deck. In the case of the Sport hatchback, there is no rear deck.

Compared to the one it replaces, the third-generation model is also wider, lower and has a longer wheelbase, with all of the above creating a firmly planted stance that hints at the “zoom-zoom” one still expects from this brand.

The ‘smiley-face’ grille from the previous generation that was a “love it or hate it” feature has been replaced with a chrome-trimmed style that is better proportioned and flanked by sleek projector headlamps that follow the contours of the front fenders.

Mazda3 interiors have always been top-shelf and the new one is no different. It has abundant soft touch materials, double stitching, and chrome and brushed aluminum accent pieces. 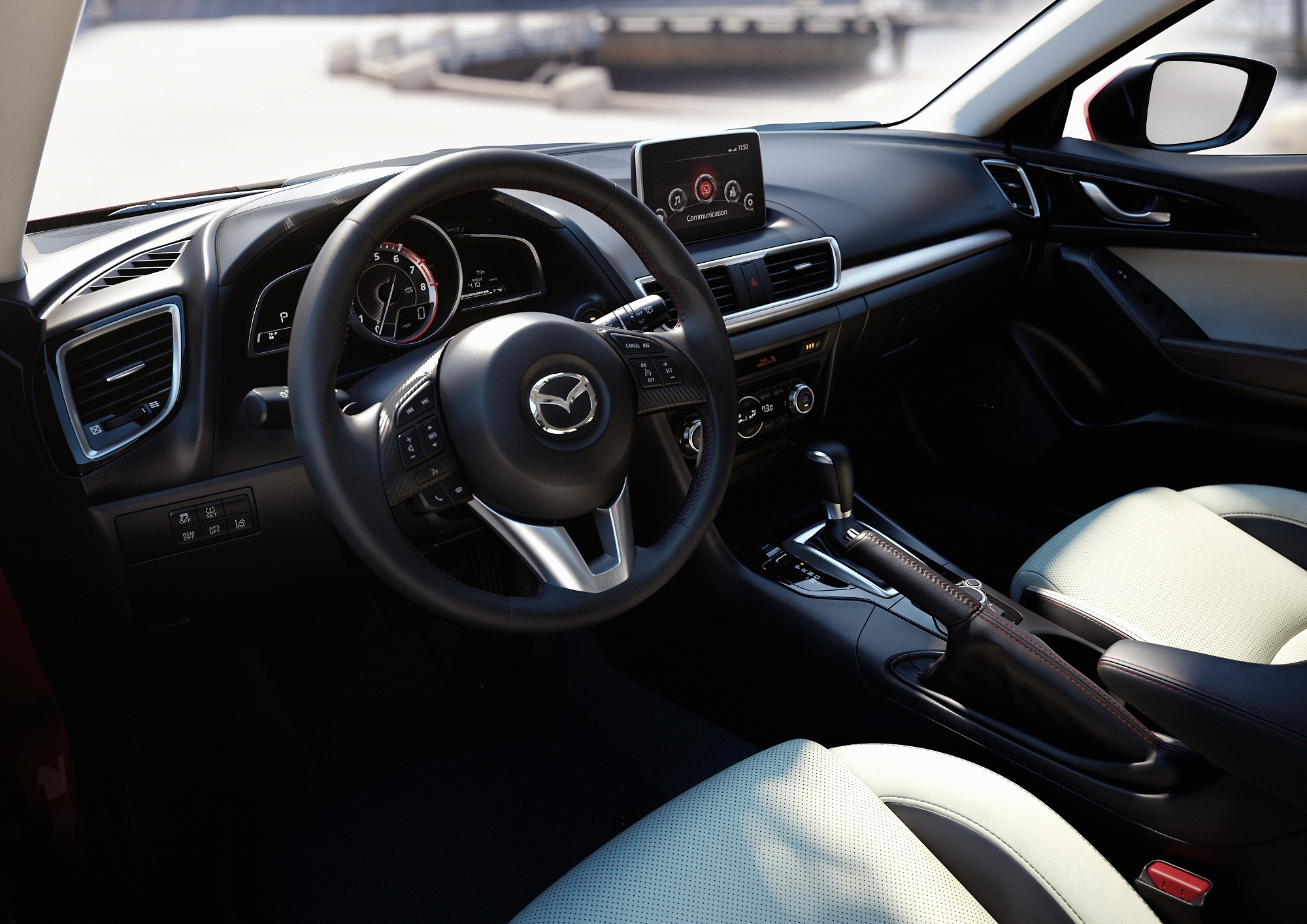 A $1,500 option on the GT model is a luxury interior package that adds two-tone perforated leather seats, leather door trim, garage door opener and a six-way power driver’s seat. This would not be out of place in any entry-luxury European sports sedan.

A first for Mazda on this model is a Head-up display that presents information without requiring the driver to look away. It uses a mirror to reflect images from a display panel and project them on the combiner, a clear panel vertically mounted atop the back of the instrument cluster hood to achieve minimal visual distraction. The vehicle speed, automatic cruise control speed settings, navigation system turn-by-turn directions, and alerts from the advanced safety systems are displayed in real time along with other important driving information.

It’s no wonder the Mazda 3 in both sedan and hatchback form were up for 2014 Canadian Car of the Year honours— they are simply great cars that continue to get better with each generation. 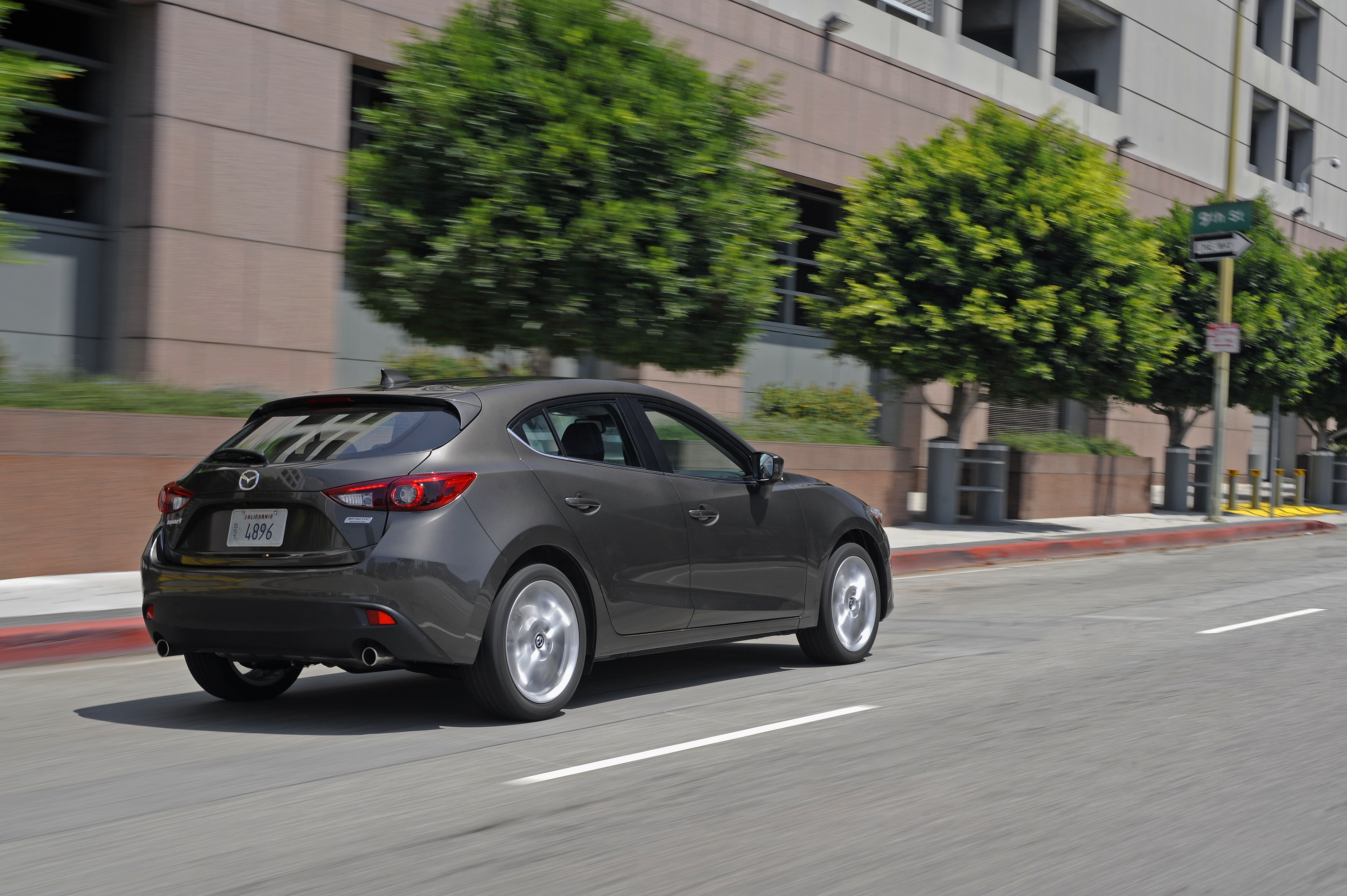