BMW's 90th-anniversary bike looks cool, sounds awesome and is a ton of fun on the road. 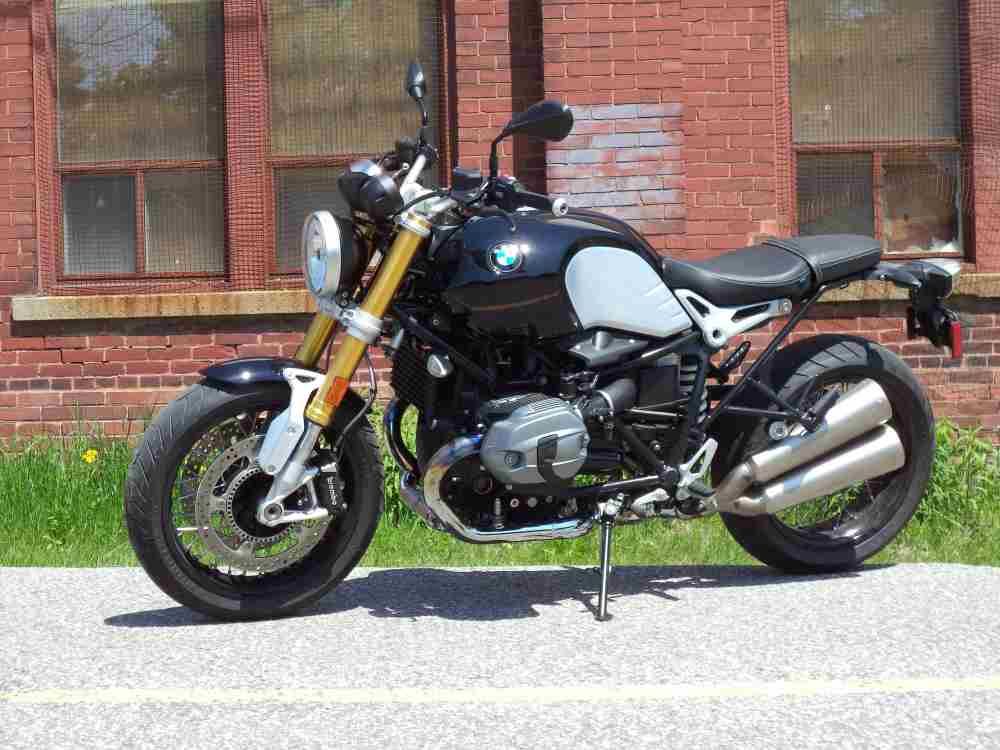 With BMW’s success on four wheels, it’s easy to forget that they were initially a motorcycle company that dabbled in cars.

The German company has been building motorcycles for a few years, now – 90 to be exact.

So the R nine T isn’t just a play on words harkening back to BMW’s first Superbike (the mid-70s R90), it cleverly works in the company’s anniversary.

The $16,200 nine T carries a strong traditional/retro theme, without being campy.

The intake ducts, handlebar clamps and fork yokes are brushed aluminum and contrast nicely with the massive gold anodized fork tubes, and the BMW roundel nestled within the headlight lens is a nice touch.

In true retro fashion, there’s no traction control or adjustable power modes, no ride-by-wire, no Electronic Suspension Adjustment and definitely no infotainment bushwah. Stop playing with the gizmos and ride the bike.

Power is supplied by the tried-and-true 1,170-cc, air and oil-cooled Boxer twin with a balancer shaft to quell unwelcome shakes. BMW claims a respectable 110 horsepower and 88 lb.-ft. of torque.

It must’ve taken some flywheel out of the old girl, as it’s a very free-revving unit, eager to rock and roll once the throttle is turned.

And rock and roll it does. Blip the throttle and it’s old school, as the bike rocks to the right with a nice bark from the dual stacked exhausts.

The frame is an all-new tubular steel unit and, instead of BMW’s proven Telelever front suspension, the nine T has the 46-mm male-slider forks lifted off the S1000RR, although without any of the superbike’s adjustability.

The cast aluminum, single-sided swingarm with Paralever linkage and a single shock, adjustable for preload and rebound damping, brings up the rear.

It rides well on pockmarked roads, courtesy of the fairly generous suspension travel: 120 mm up front and 135 at the rear.

Huge, twin 320-mm front discs squeezed by four-pot monoblock radial-mount calipers are strong enough to stop a runaway Freightliner careening down the east face of the Rockies. Two fingers bring the bike to a safe, controlled stop and, thankfully bucking the retro theme, ABS is standard.

A unique feature of the nine T is the new exhaust system made for BMW by Akrapovic, with twin upswept silencers on the left side of the bike, instead of the traditional right side.

And the sound! It’s rich and throaty without being obnoxious to the neighbours, and is possibly the nicest stock exhaust sound since the early 70’s Norton peashooters.

The 785-mm seat height makes it easy for even those short of inseam to reach the ground with both feet and, despite looking somewhat flat and unappealing, it’s actually fairly comfortable.

The bars are high and wide, so the riding position isn’t as sporty as the 1200R and even I, at 6-foot-3, didn’t feel overly compromised by the bars-to-seat-to-pegs relationship.

No high-tech video game dash layout here, just the basic analog tach and speedo, although apparently one techno-geek got past security, since there is a digital gear indicator, digital odometer, twin tripmeters and fuel consumption monitors. 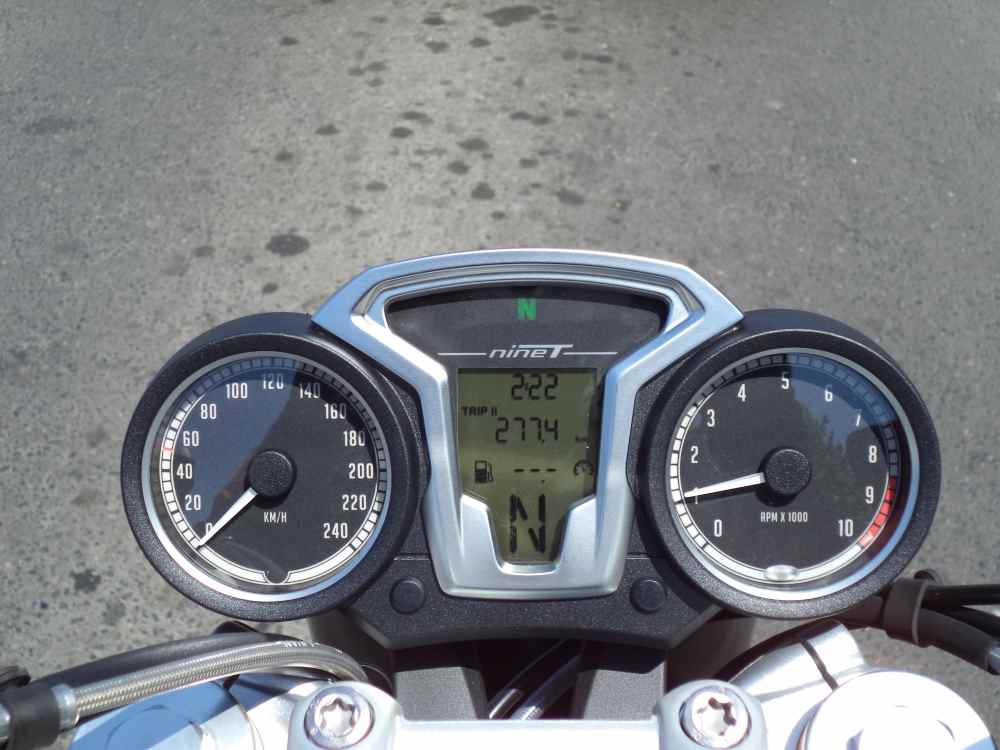 Said geek also managed to wangle LED tail and brake lights into the package, as well as covertly planting a computer chip into the ignition key making hotwiring impossible. Okay, so maybe a few concessions to the modern era are okay.

Pull the surprisingly light clutch lever, snick into first gear and the nine pulls away effortlessly.

The 110 horsepower meets anyone’s daily requirements, the torque curve is flat, the throttle response seamless and there is loads of mid-range.

It’s an absolute hoot riding around town or strafing your favourite twisties, and freeway cruising is smooth, although the upright riding position and lack of wind protection beats you up pretty good after the first hour.

The nine steers with the precision of older ladies divvying up a lunch cheque, and feels like it was carved from a solid block of billet. It is rock steady, the forks give excellent feedback and it will not deviate from the selected line unless the rider chooses to.

BMW offers a full range of well-designed and properly fitting accessories, including a Bobber-style chopped seat and rear fender, desert-racer high exhaust, an aluminum tail cover with padded backrest, tailbag, tankbag and (something I consider a necessity in Canada) heated grips.

The R nine T looks incredibly cool, sounds awesome, and has modern performance and handling. Going for a ride is more fun than releasing a cat into the Westminster Dog Show.

Now for the bad news: this year’s production is already sold out, so place your order now for a 2015 model.

Seems like nostalgia is still what it used to be.

The vehicle tested by freelance writer Steve Bond was provided by the manufacturer. Email: wheels@thestar.ca.