Ten classic Hot Hatchbacks that started it all

Finally, after what seems like eons, we in the North American market are getting a real, no-holds-barred looks at what the hot hatchback is all about.

Finally, after what seems like eons, we in the North American market are getting a real, no-holds-barred looks at what the hot hatchback is all about.

Oh sure; we’ve had the Volkswagen GTI for years and more recently, the Subaru Impreza WRX and STI models (actually, that’s a bit of a backwards example in this context as those models are no longer available in hatch form), but compared to what Europeans have had to work with for decades, our selection was decidedly lo-fi.

Now, though, that’s changing. Look no further than Ford’s line-up of two (soon to be three) sporty hatches to see how we’re standing at the doorstep of a new performance car age in North America.

How did it all begin, though? When did we start to see that in addition to their supreme practicality, they could be a blast on our favorite b-roads, too? 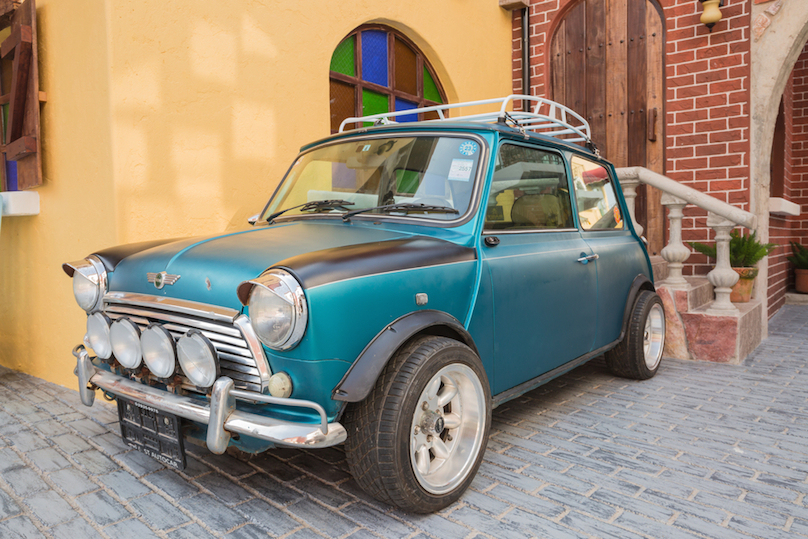 OK, this is a bit of a stretch in that the car actually debuted many moons before 1980, but you can’t really have a discussion about fast hatchbacks without mentioning the little bulldog from Birmingham.

By 1989, power was up to just under 100 hp (it’s not much, but remember that the first Mini had only 33 hp), so now you had the power to go with what was an immensely chuckable chassis. With the engine and drive wheels up front and the driver actually sitting behind the chassis midpoint, you had almost perfect weight distribution, making the Cooper a right good steer. 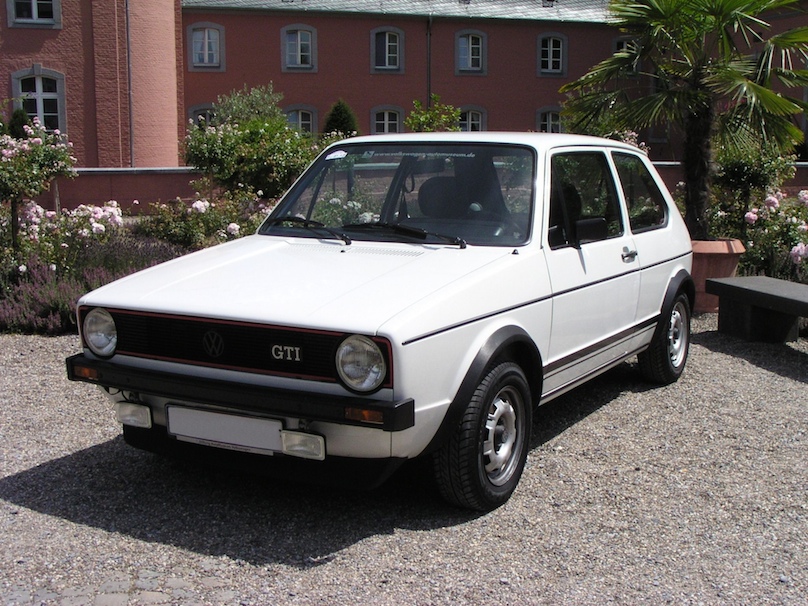 It was called the Golf everywhere but Canada and the U.S., and as much as the Cooper-heads like to claim that it is what birthed the hot-hatch movement, it’s hard to take the laurels away from the Rabbit/Golf GTi, if only because they’re still building them today.

Oh, but you would hardly know it from looking at it, though. 18-inch wheels? Try 14’s. 210 horsepower? Forget about it. 100 on a good day. Really, about the only connections you can see between the original and the current is the front-wheel drive layout, red striping ‘round the grille, and tartan interior.

You didn’t need power to get at what made the original GTI great, though. The engine was peppy enough for you to be able to get the most out of the pointable, agile chassis and that’s really what hot hatches are all about. 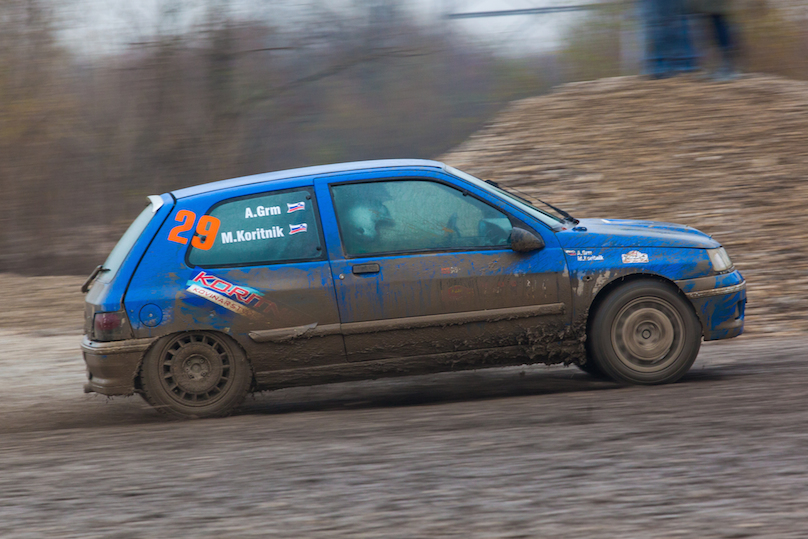 Developed to ride the wave of momentum being generated by the Williams F1 team, the mad scientists at the Renault Sport skunkworks took a run-of-the-mill 205 hatch and went all Dr. Frankenstein on it.

Power from the 2.0-litre four-banger was raised to 150 hp, but reports from the era focused less on that, and more on just how tractable it was. Oh, and how could you not love those gold wheels? Unlike the Rabbit and Mini, the Clio dub was rare, too; they made just under 7,000 of these across three versions when all was said and done, as that’s all that was required to properly homologate the car for the era’s French Rally Championship. 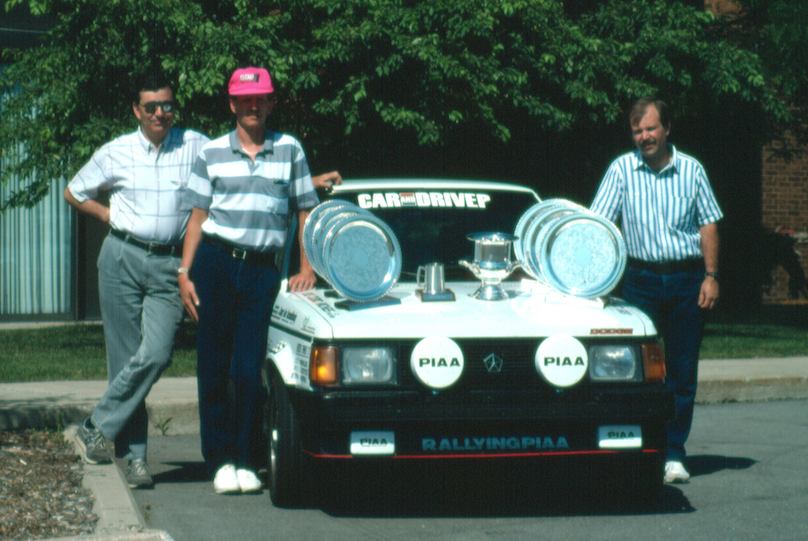 Well, for starters, Carroll Shelby, being the good ol’ boy—not in the NASCAR sense, just in general—that he was, chose what may be the best acronym ever in the history of cars.

Not that it was new for him. His original opus, the 1965 Shelby GT350 Mustang, was named as such not because it had a 3.5L or 350 CI engine; not because “350” were the miles travelled in some race somewhere, but because Shelby was standing what he felt was about 350 steps away from the car when it came time to name it.

So, in true Shelbian fashion, “GLH” stands for “goes like hell”.

And go like hell it did; thanks to the addition of a turbocharger, 142 hp was freed up from the little 2.2L four-banger under the hood, which they made sure the chassis could handle by adding stiffer springs and bigger brakes.

One of the best aspects of the GLH-T, though, has to be just how unassuming it is. The Shelby name didn’t appear anywhere on the car; the main differentiators being subtle “GLH” decals and some Bosch headlamps up front. Unassuming, that is, until you roll up in your BMW 2002, and get promptly smoked of the line by this little hatch that was eventually replaced by—wait for it—the Aries K. 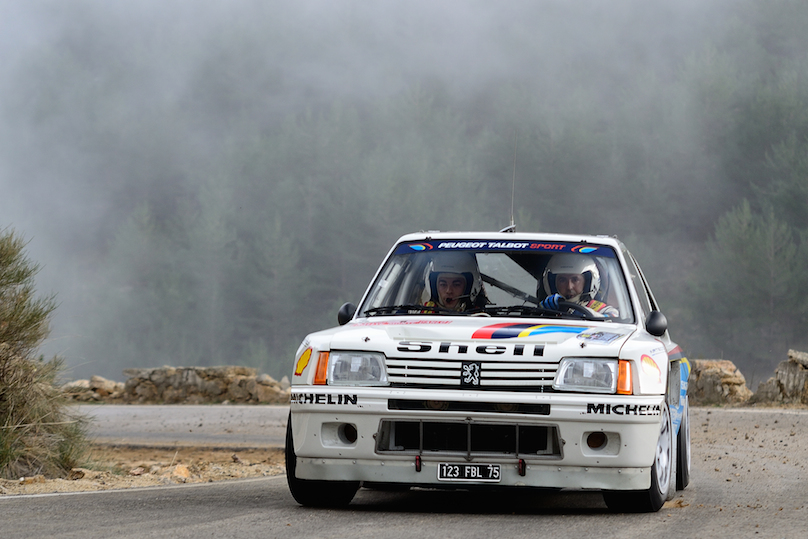 You may not know what “Group B” is, but if you consider yourself a fan of motorsport, and have an interest in finding out just how crazy cars can get, you should.

For Group B was a group invented by the International Automobile Federation that pretty much was a synonym for “unlimited”, in an effort to garner more interest in motorsport and rallying, in particular. What followed were some of the most insane rally cars you’ve ever seen, thanks to the popularization of turbocharging and four-wheel drive.

Which is where the Peugeot 205 Turbo 16—all wide bodied and flame-spitting—comes in. Derived from the standard 205 in order to properly homologate the car for the rally circuit, the 205 T16 made 197 horsepower; this, at a time when Ferraris were making do with less than 240 hp.

Of course, being a homologation special, very few of the 205 T16’s were built; you’d have more luck finding a 205 Rallye of the similar era. Indeed, while you’d be losing the 4WD and turbo power, you’d still be getting an agile chassis, power enough to hustle the sub-800 kg Rallye along with some gumption, and possibly the best steel-wheel treatment you’ve ever seen. 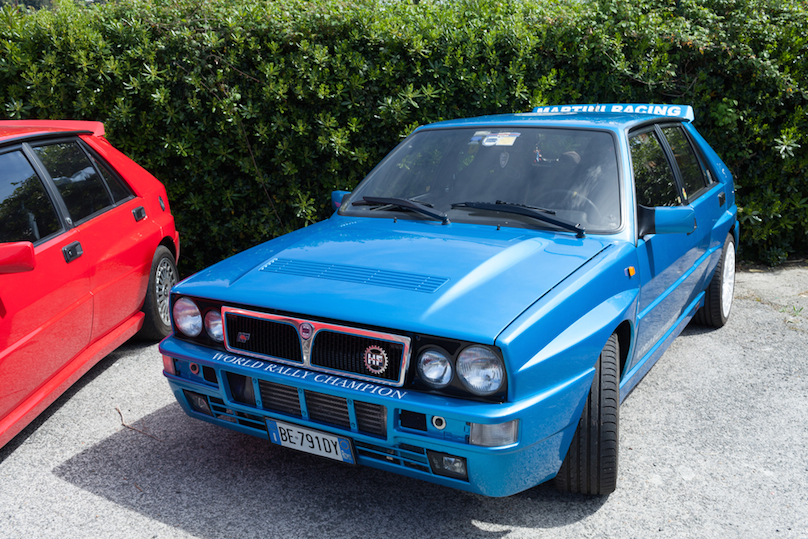 From one rally-inspired hot hatch we move to another. Only this time, the country is Italy as opposed to France, and the car is AWD as opposed to FWD.

The Delta Integrale had a bit of a tough go; it had to shake of the spectres of its predecessor. It was called the Delta S4, and it was involved in one of the crashes that effectively banished group B rallying to the history books.

While the Integrale lost that car’s crazy super- and turbocharged powerplant, it did retain the turbocharging part, eventually topping out at over 200 horsepower. The best part? Unlike the Rallye or Clio Williams, these could actually be had over here. And, since they provided the basis for the all-conquering rally version of the era, they’re fairly robust, too. 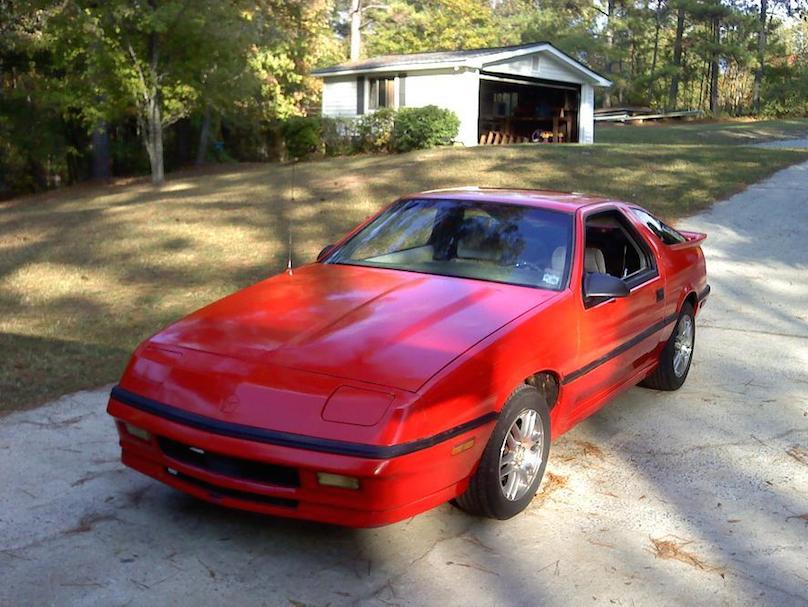 Well, if you wanted to nitpick, you’d say that since this is a Canadian site, we should be calling it the Chrysler Daytona as that’s what it eventually came to be called in Canada. That being said, it was originally called “Dodge” in Canada, too, so we’ll stick with that. Plus, it sounds way, way better.

Only trouble is, it sounds better due in no small part to the fact it sounds like the outrageous Charger Daytona muscle car from the ‘70s. Which, I assure you, the FWD Daytona hatch is not.

Still, it has to be respected for taking the woeful (but, unfortunately, big-selling) K car platform and making something of it, through the addition of a turbocharger and some none-too-bad hatchback styling.

Not to mention that like the Omni hatch (which came before the K-cars; see a pattern here), motor magician Carroll Shelby also did a number on the Daytona, upping the hp to 174, and modified the suspension, too. 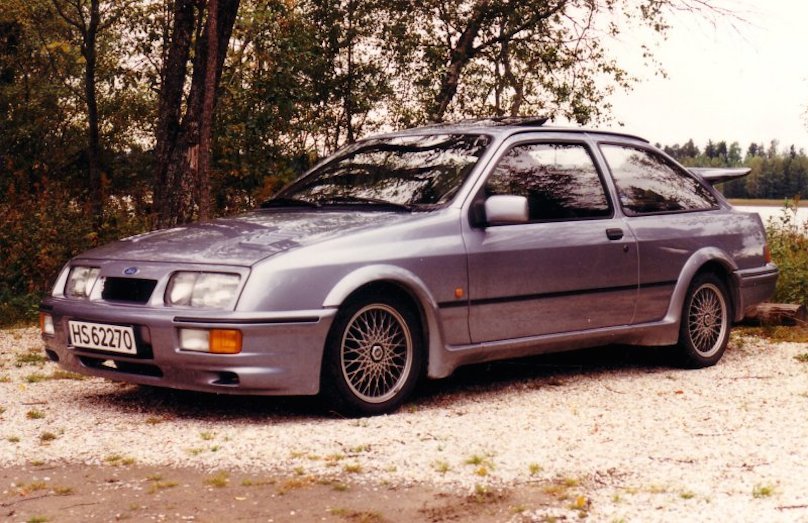 You may not recognize the name, but you surely recognize the shape, as it was adopted by Ford’s defunct Merkur division for its XR4Ti, which is all we got over here.

That’s not the one you want, though; for the true tail-out, rally stage ethos, it’s gotta be the Sierra RS Cosworth, which pushed 204 hp straight to its rear wheels via a five-speed manual transmission. Further, more than just pushing out big power, its engine got a thorough once-over from Cosworth Engineering, known for building some of the best, most sorted four-cylinder powerplants, ever.

The Sierra was a champ on both the rally racing and touring car circuits, and more than just being a zippy little hot-hatch, it could even flex its people moving chops as the roomiest car on this list.

Really, though; a rear-wheel drive hatchback? In the mid-80s? With that rear wing? How could you not want one? 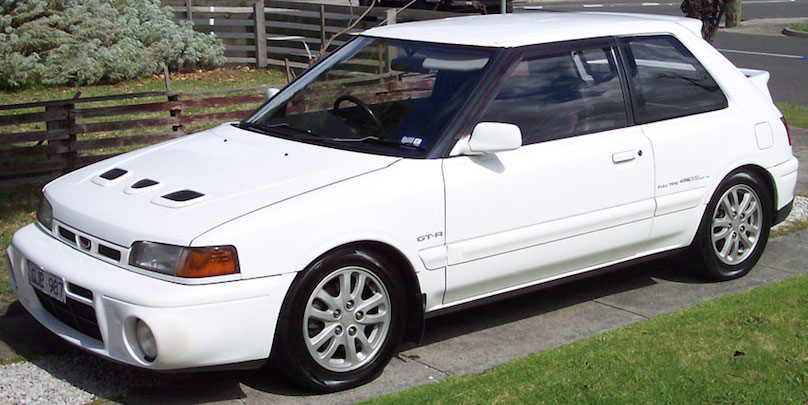 Not to be outdone on the rally stages of the world by the Europeans, the Japanese threw their hat in the ring in the form of a mutated version of the little 323 hatch. Dubbed “GTX” (and later, upon further mutation, “GTR”), these pocket rockets were more than just a bunch of fancy stickers on a standard 323; they had four-wheel drive, stiffer suspension and turbocharged power. They even got limited slip differentials, for when you really wanted to hang the rear end out.

That’s right; long before the Mazdaspeed models were even a glint in the eye of their creators, these little babies were tearing up the dirt on the rally stages and the tarmac on the road. GTX models made over 180 hp, while the super-rare GTR cars just barely missed cracking the 210 hp threshold. Then again, with some creative turbo tuning… 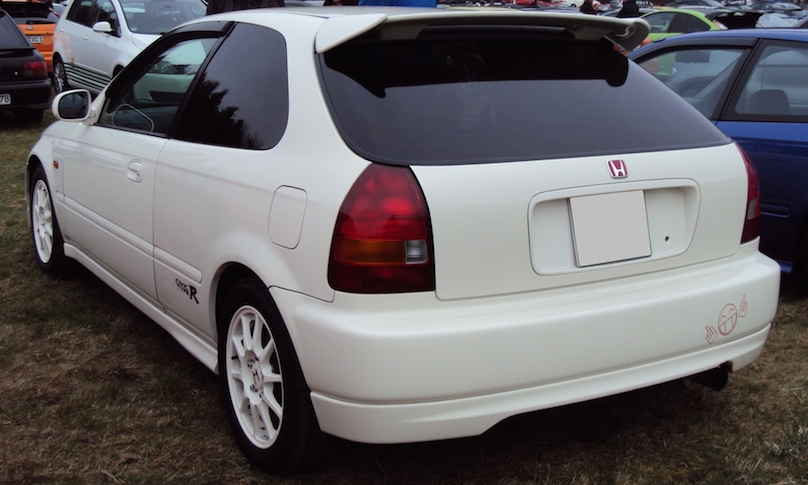 From the rally racing and touring car circuits, we move to the world of the import tuner. It’s a world that some may argue was started by stuff like the Toyota AE86 Trueno, but you could say it reached its zenith with the Civic Type-R.

Yes, there were fast Civics before it—the Si of the late ‘80s, early ‘90s, for example—but none quite have the mystical air that does 1997’s Type-R.

The white wheels. The red Honda logos. The aggressive ground-hugging suspension; it’s all here, and for better or for worse, once the Si was revealed, it quickly became pretty easy to at least make your pedestrian EK Civic hatch look like a Type-R.

Chances are, though, you wouldn’t have all the stuff that made an actual Type-R so special; the lack of sound deadening (to save weight), red-painted cam covers and red Recaro seats, not to mention the slick-shifting close-ratio transmission. While it’s one of the newest cars on this list, it’s actually one of the least powerful, deriving just 185 hp from its zingy four-banger. Then again, that’s achieved without the use of any kind of forced induction, so you have to chalk it up to a tight-as-a-drum version of the venerable 1.6L four. Just adds to the mysticism that surrounds this most legendary of Civics.