Along with an all-new Hybrid option, the 2020 Ford Explorer also gets a high-po ST option, following in the footsteps of its Edge sibling. Here are ten things to know about the most powerful Explorer ever. 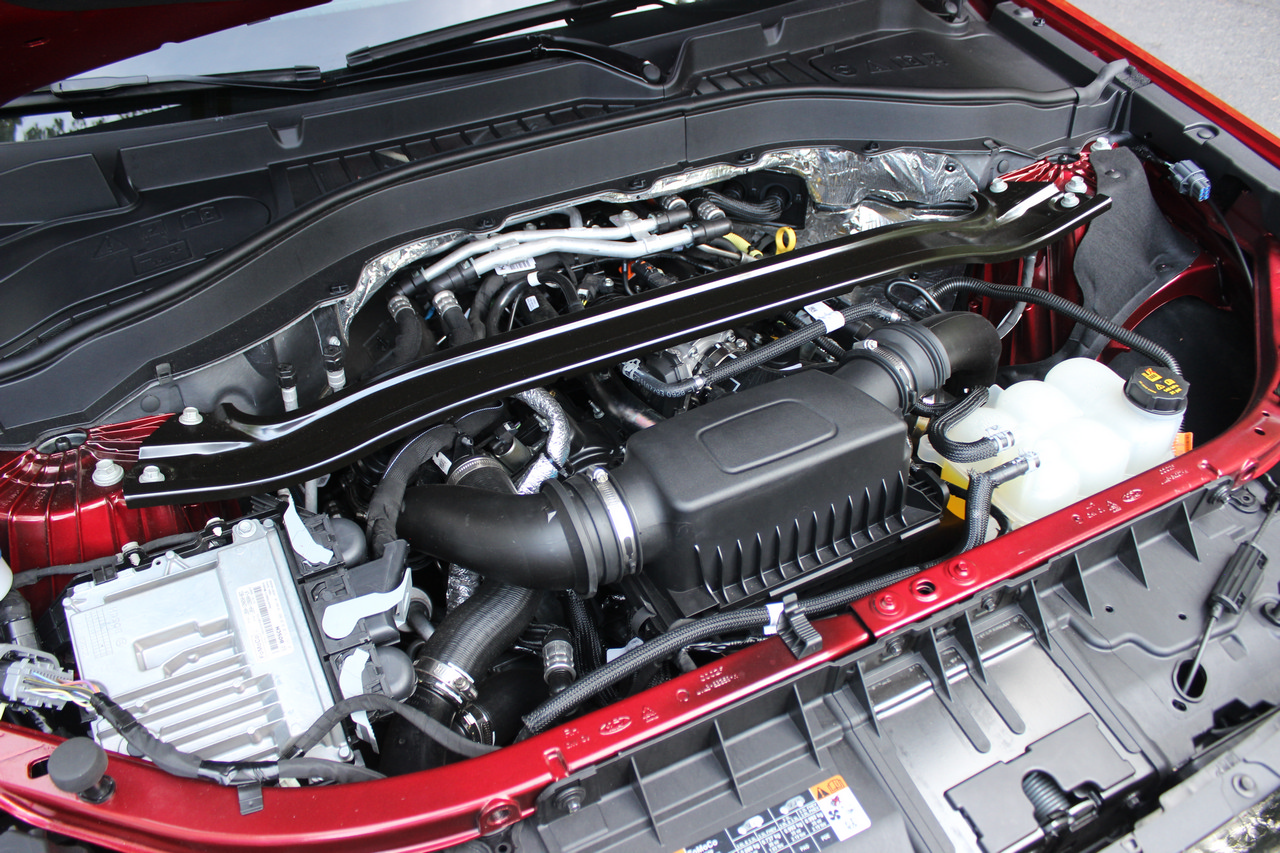 While “lesser” Explorers make do with either a 2.3L four or a 3.3 six paired with an EV motor, the ST gets a 3.3L twin-turbo EcoBoost that first saw use in the Lincoln Continental. It makes more torque here, though – 415 lb-ft – while the power remains the same at 400 hp. Numbers are one thing, but they’re just window dressing if the ST can’t walk the walk, but walk it does; actually “sprint” is more like it as when those turbos get on boil, the fact that it’s a large three-row SUV becomes inconsequential as it blasts forward with gumption, accompanied by a throaty growl from its re-tuned exhaust.

Paddle shifters for the 10-speed automatic also come as standard, and I ended up getting plenty of use from them during my test. 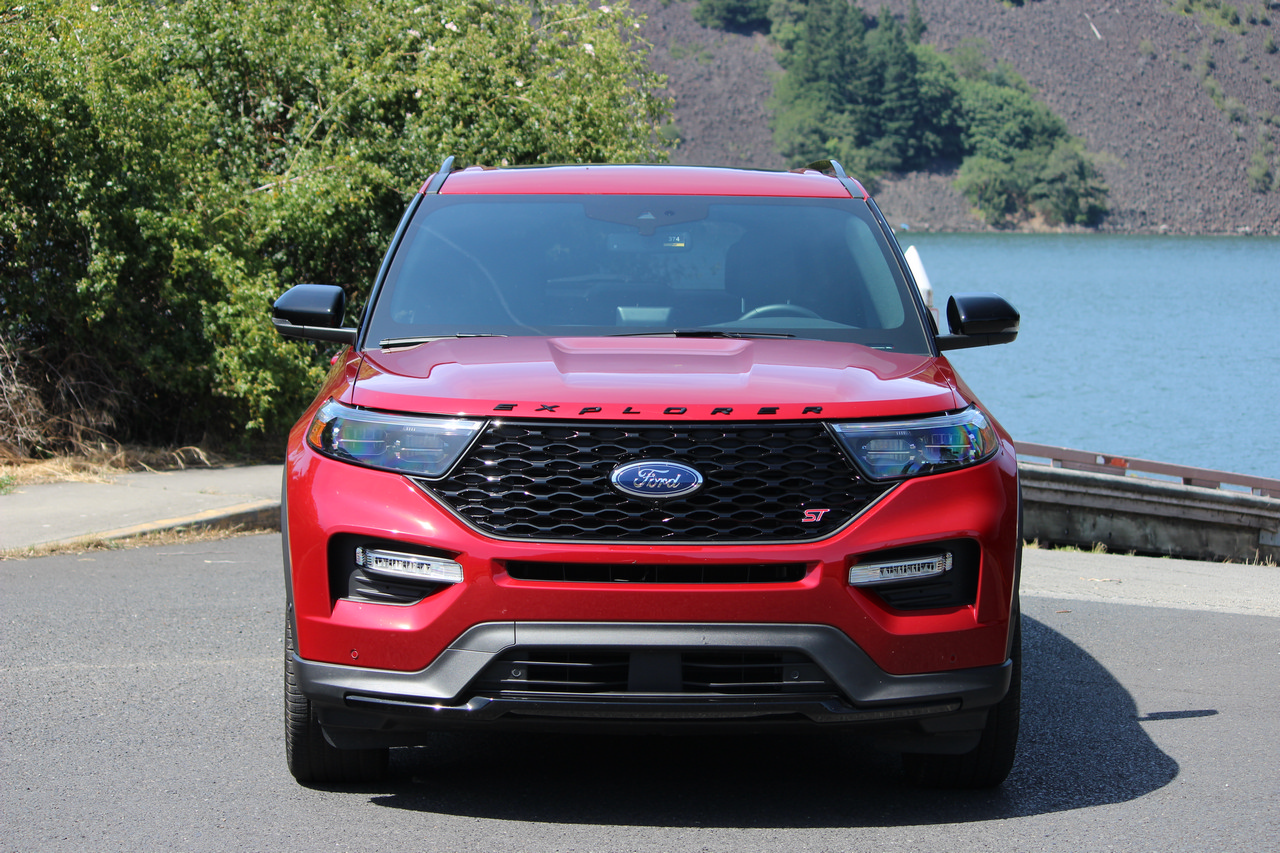 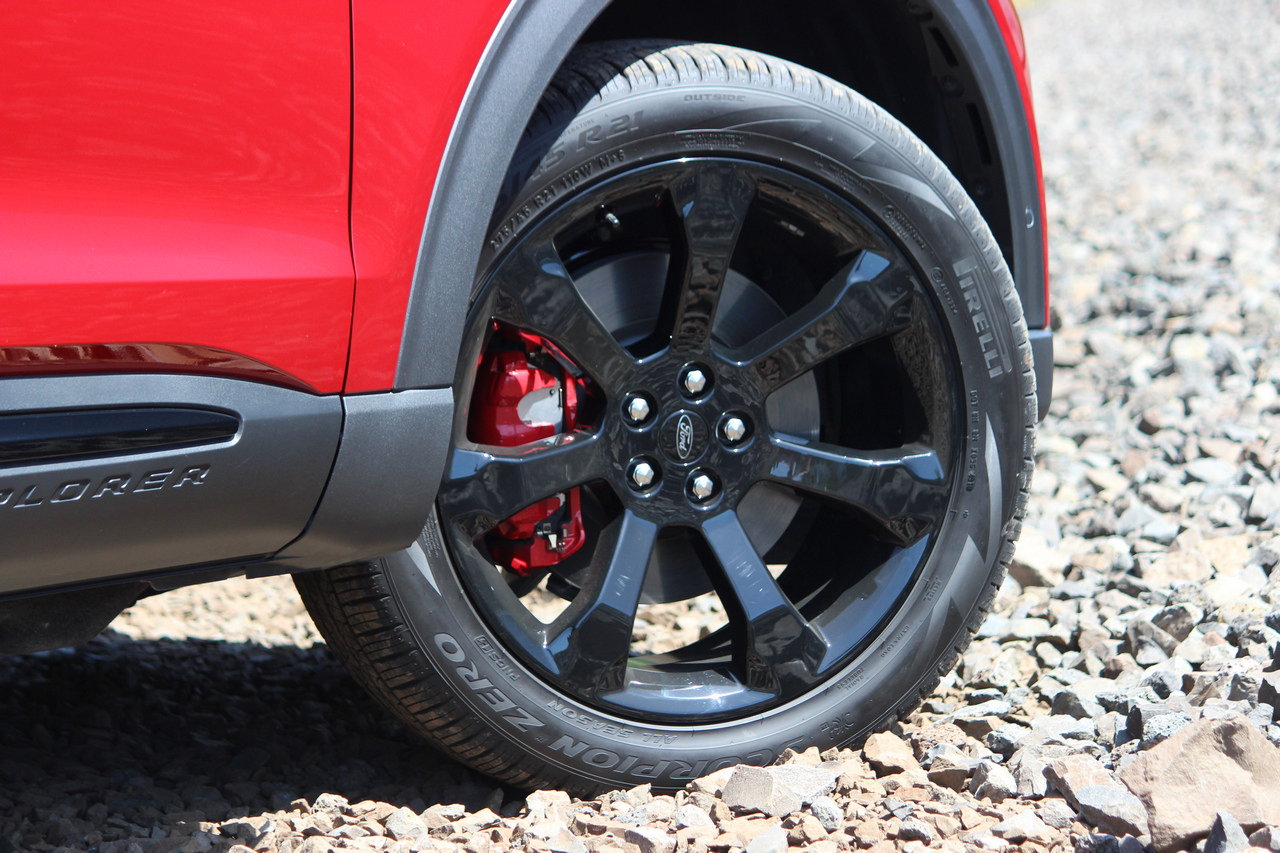 It’s all well and good that you’ve got all that power underhood, but what’s the point if you can’t yell a bit about it, right? In order to help differentiate the ST from other trims, Ford has given its hi-po model a blacked out grille, smoked headlamps, special wheels and colours, new front splitter, large quad exhaust openings and unique side sills. 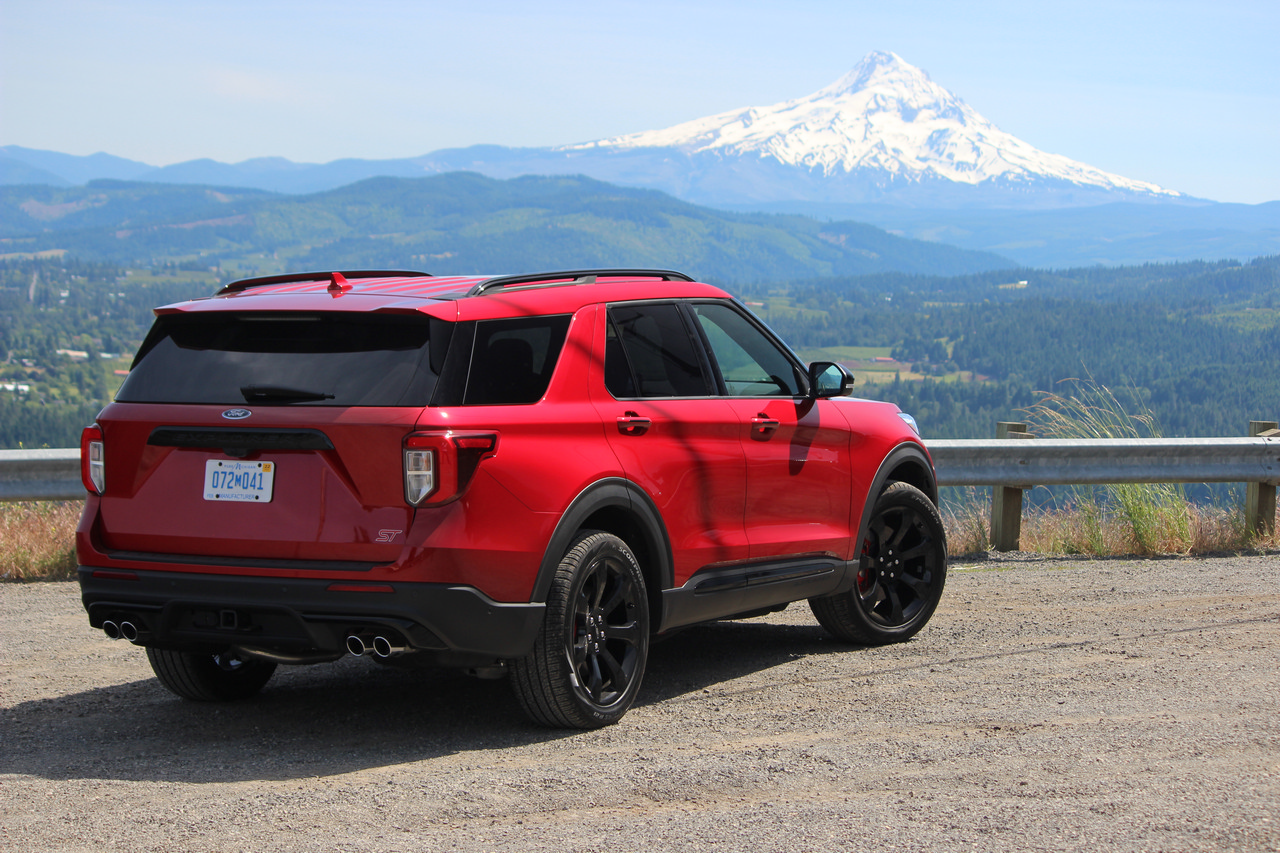 While the last-gen Explorer’s AWD system was front-biased, the 2020 gets a rear-biased set-up meaning it acts as a RWD vehicle unless the system detects that the fronts need some help – there’s even a RWD version of the base truck available in the US. When it comes to the AWD-only, what it means is both a smaller turning radius and more car-like handling, which is important for a performance SUV like this. It can really be felt, too; turns that we thought would be of the three-to-five-point variety became doable in a single move, and we even managed to unstick the rear end on a gravely patch of road, which is a pretty unique feeling in the three-row SUV/CUV world.

But it remains AWD 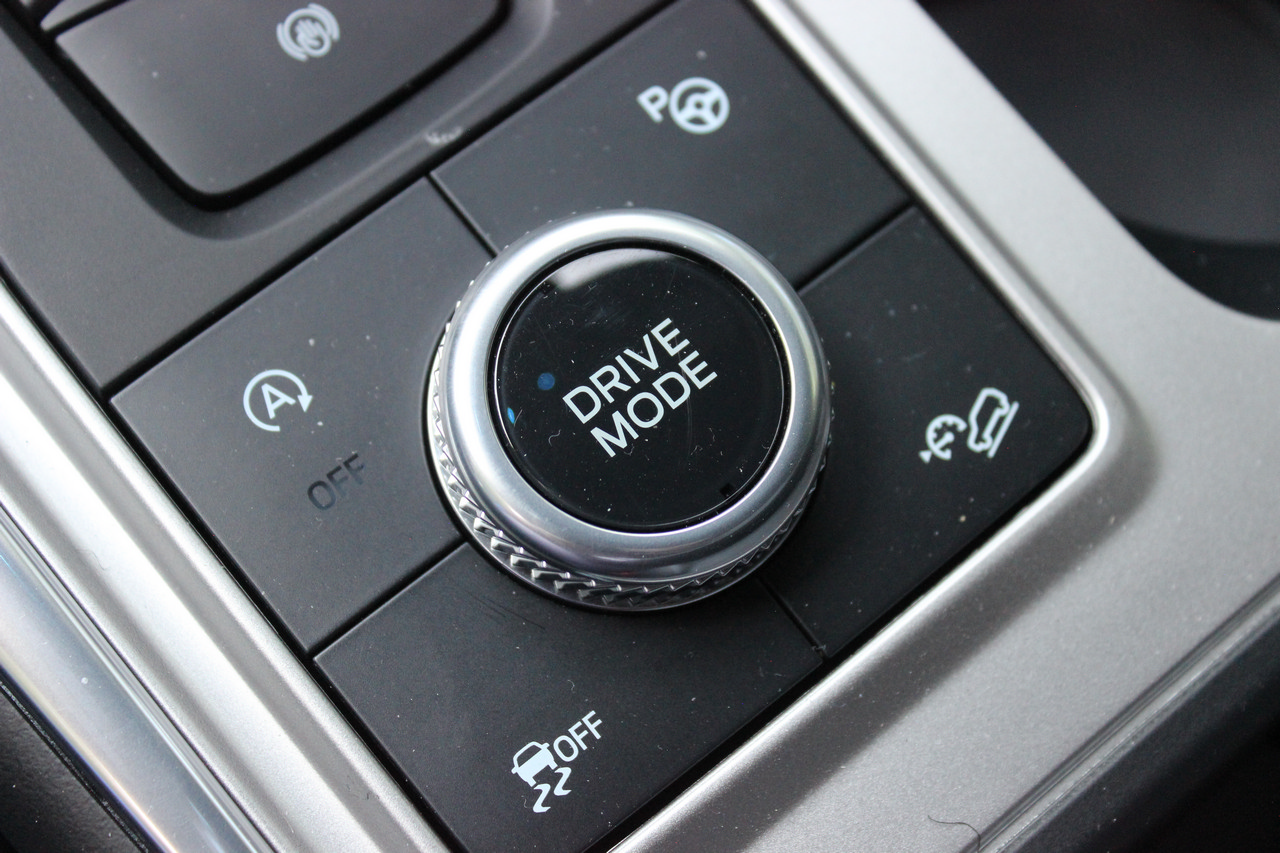 RWD-based it may be, but the ST is just as capable off road as it is on it, offering the same terrain select system seen on other Explorers as well as the same ride height, just with firmer dampers. It can also tow up to 2,540 kg.

Keeping it all in check 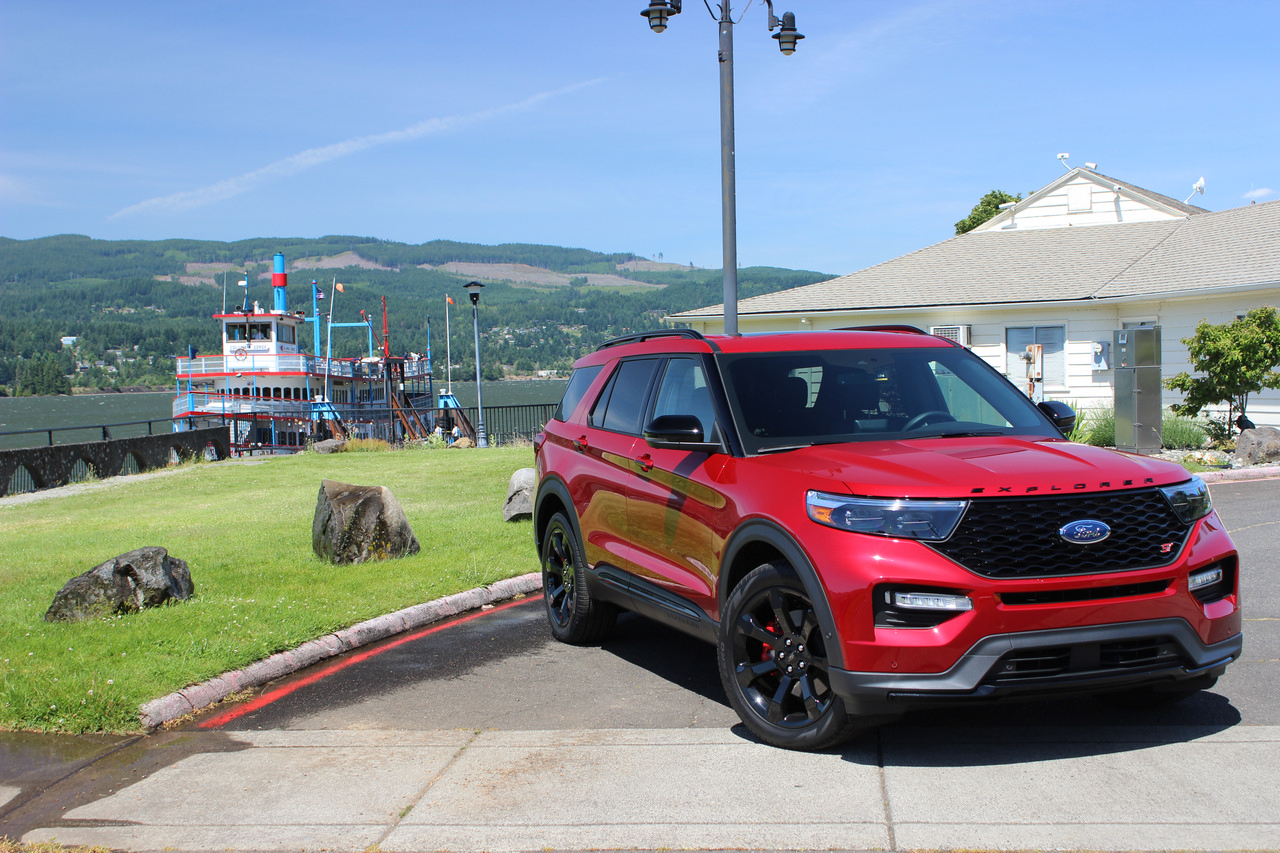 What those firmer dampers do, of course, is help ensure that the ST stays planted as you hustle it through the corners. While we didn’t have a race track in which to fully test its capabilities, the roads around central Washington and Oregon through the Cascade mountains are full of fast sweepers and tighter hairpins, perfect for a Mazda MX-5 or Porsche Boxster. Or, as it turns out, the Explorer ST as flinging the big Ford through these bends was an eye-opening experience. While I won’t say its performance was “sports car-like”, it certainly felt more responsive and athletic than something this large should. When the ST was announced at the Detroit show earlier this year, I questioned them putting an “ST” badge on their second-largest SUV, but now I’m starting to come ‘round. 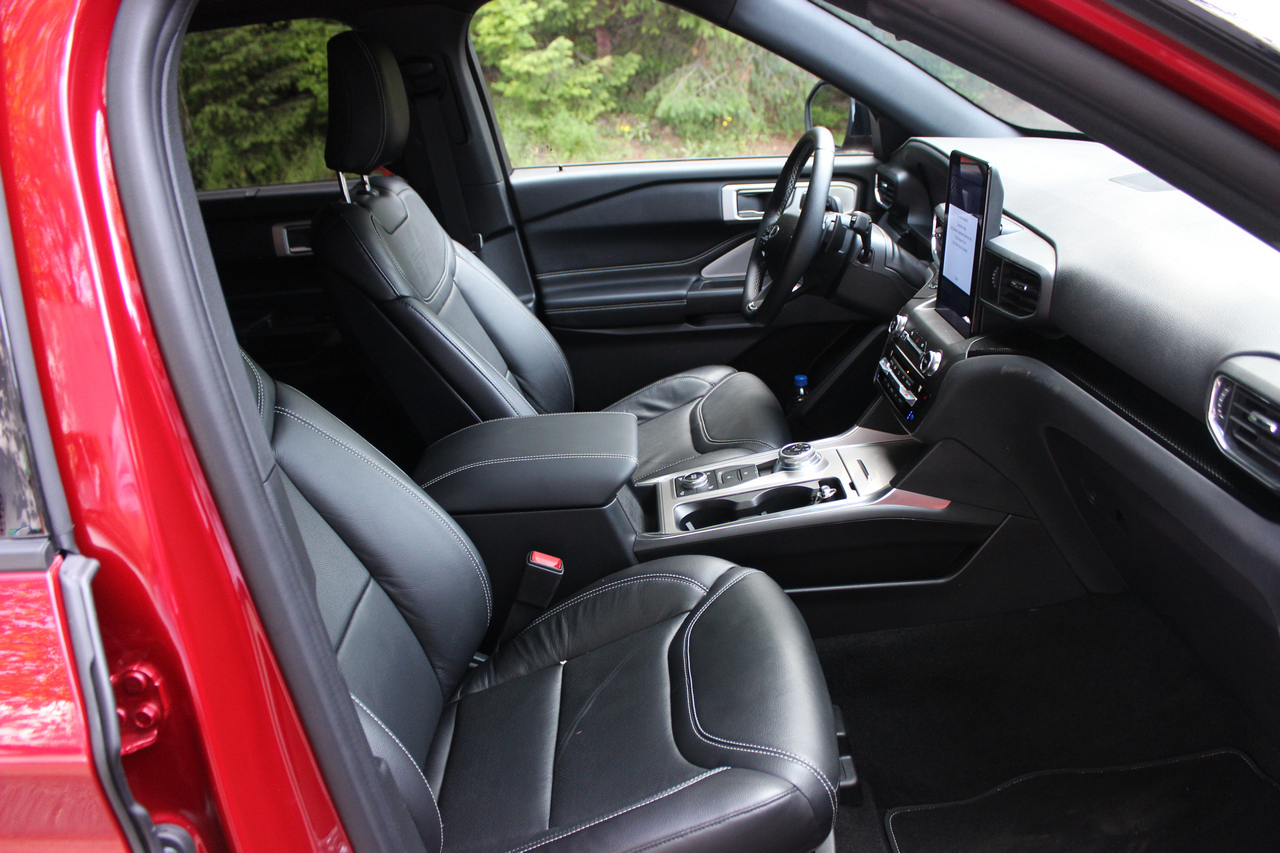 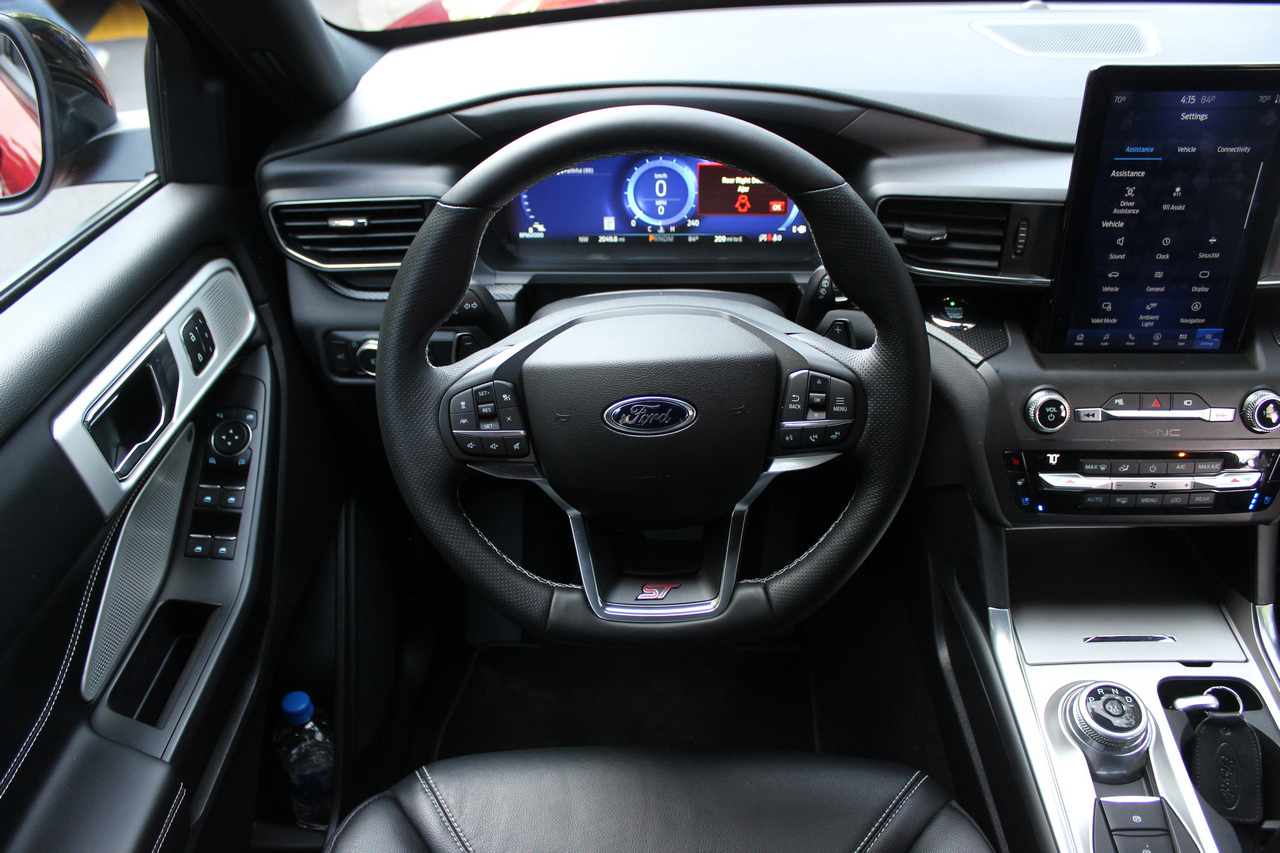 All ST models get special front seats that are more highly-bolstered than what’s found on other Explorers. They’re only available in black leather – no big deal – but what I would like to have seen was some special tweaks like red stitching and so forth. Thankfully, the optional moonroof ($1,750) keeps things a little lighter inside, even with all that black leather.

What I found a little tougher to forgive, however, was how even though it has larger bolsters, I never found I was able to sit in the seat, as opposed to on top of it. Strange, that.

Room for the whole family 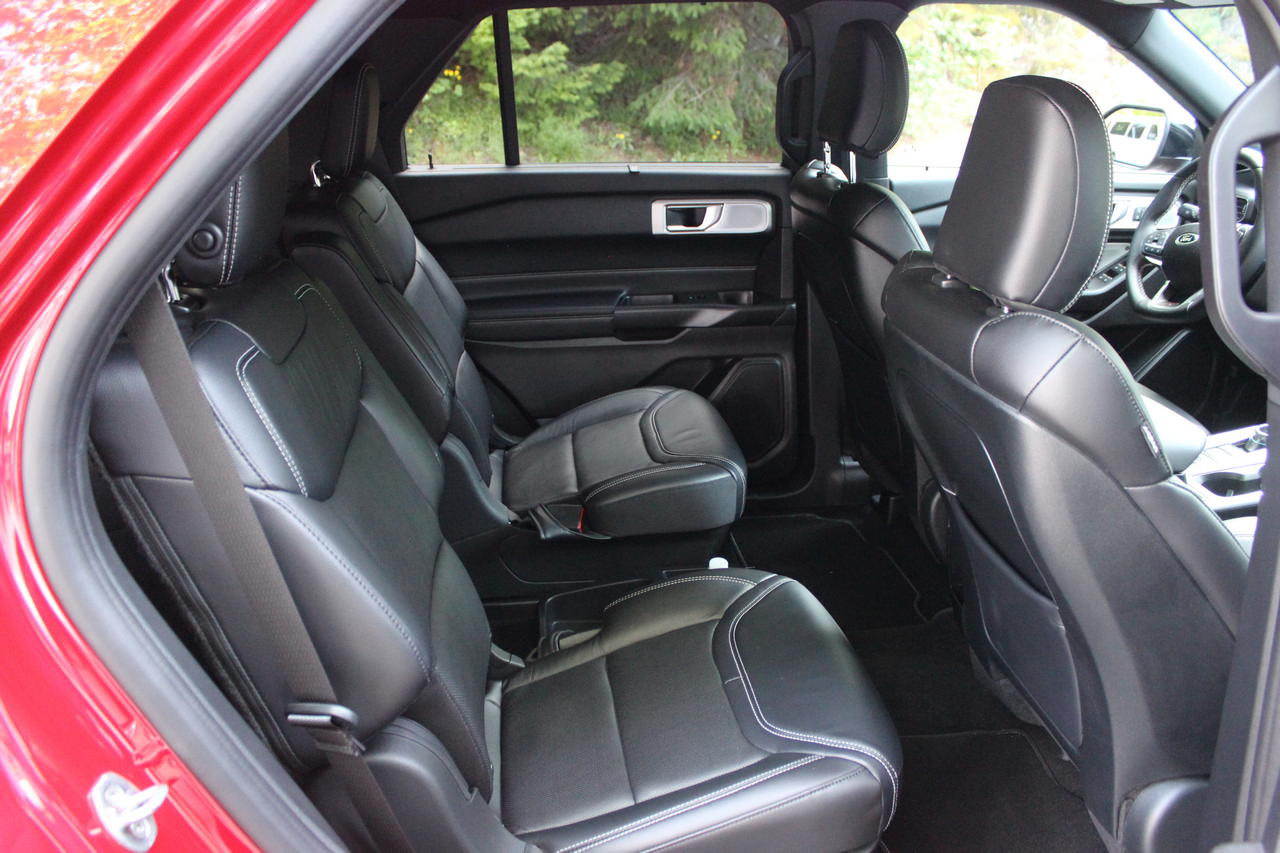 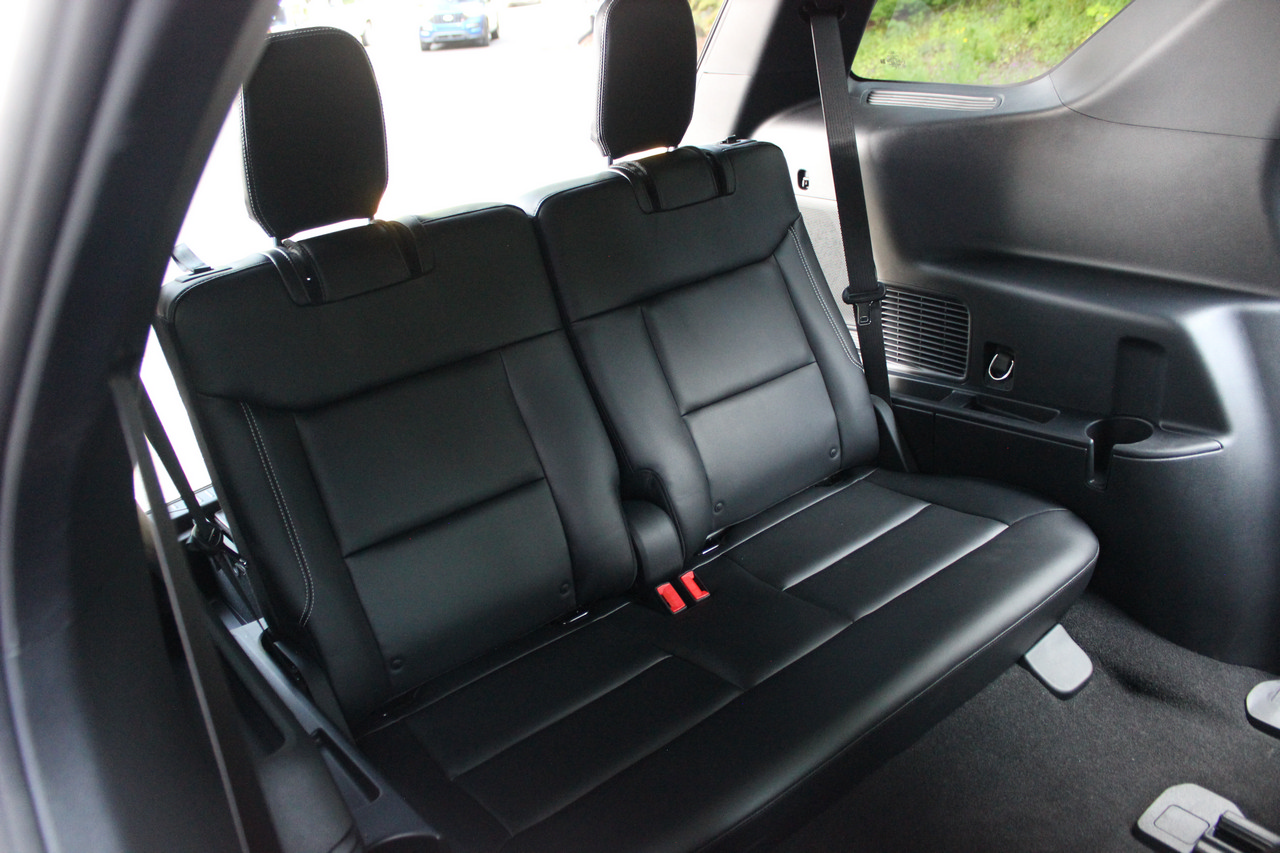 A performance variant it may be, but it remains first and foremost a family hauling road trip companion. It still gets three rows of seating as the only configuration, and even in ST form, the second row can be either an optional three-person bench seat ($500), or standard captain’s chairs. The latter provide easier access to the third row – you can step in rather than around them, as you do the bench seat – but they also lend a little more class to the proceedings. Or, you can fold everything flat for plenty of rear storage, to the tune of 2,486 L; the number shrinks to 1,356 with the second row up, and 515 with all seats up, though there is some underfloor storage behind the third row for a little extra room.

Tech for the whole family 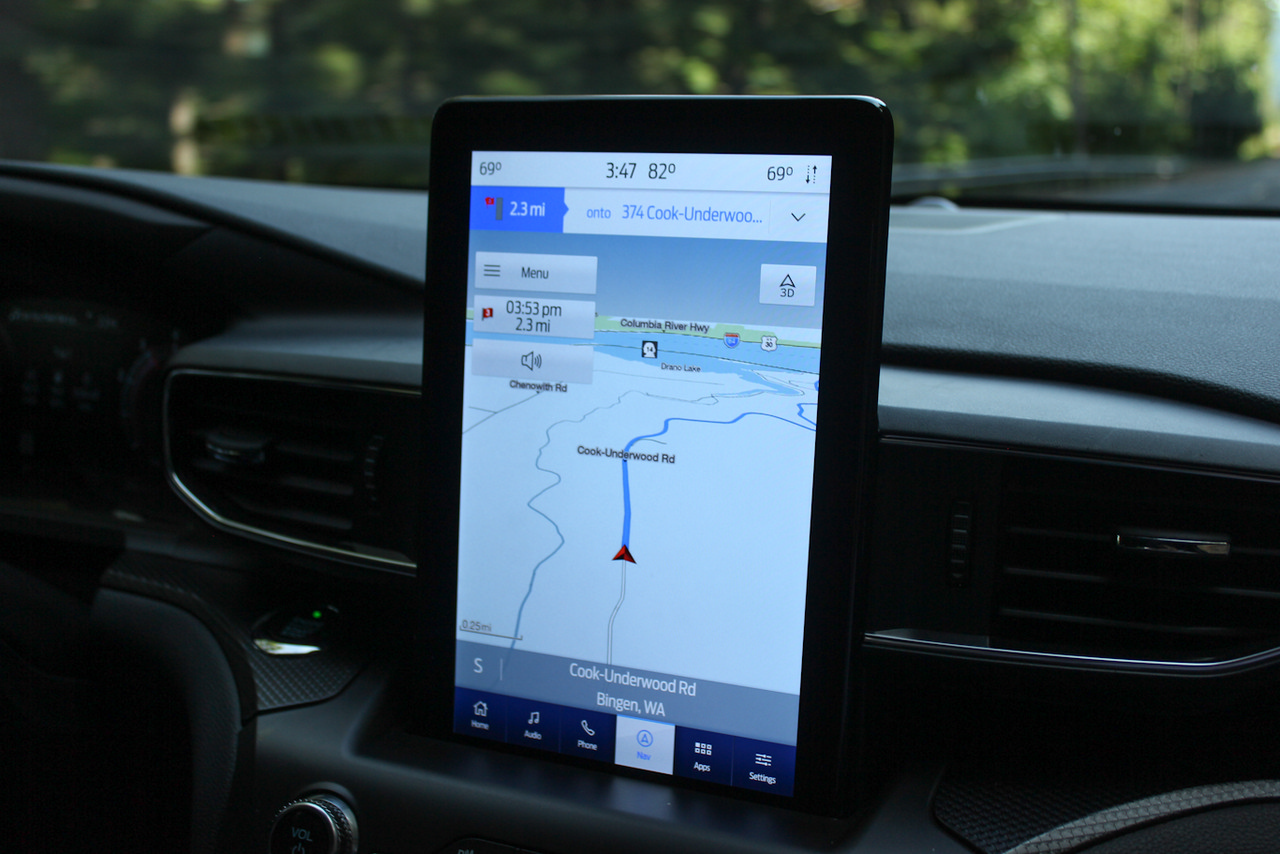 A look at the ST’s dash, and one thing stands out above all the rest: the vertical 10.1” infotainment display. I’m not going to say that it’s perfectly integrated as it looks more like an iPad’s been docked there, but my oh my, is it ever effective. Scrolling through menus is that much easier as more can be fit on the screen, and it can also be divided to display different info panes. The favorites tab has also been adjusted so you no longer have to first switch the radio band before accessing your favourites; every favourite can be accessed form a single menu, no matter the band. It’s not an industry first, but it is a step up. 4G LTE WiFi with pairing of up to 10 devices also comes as part of the deal, so the family can watch Netflix to their heart’s content on that boring drive between Montreal and Toronto.

Tech for the driver 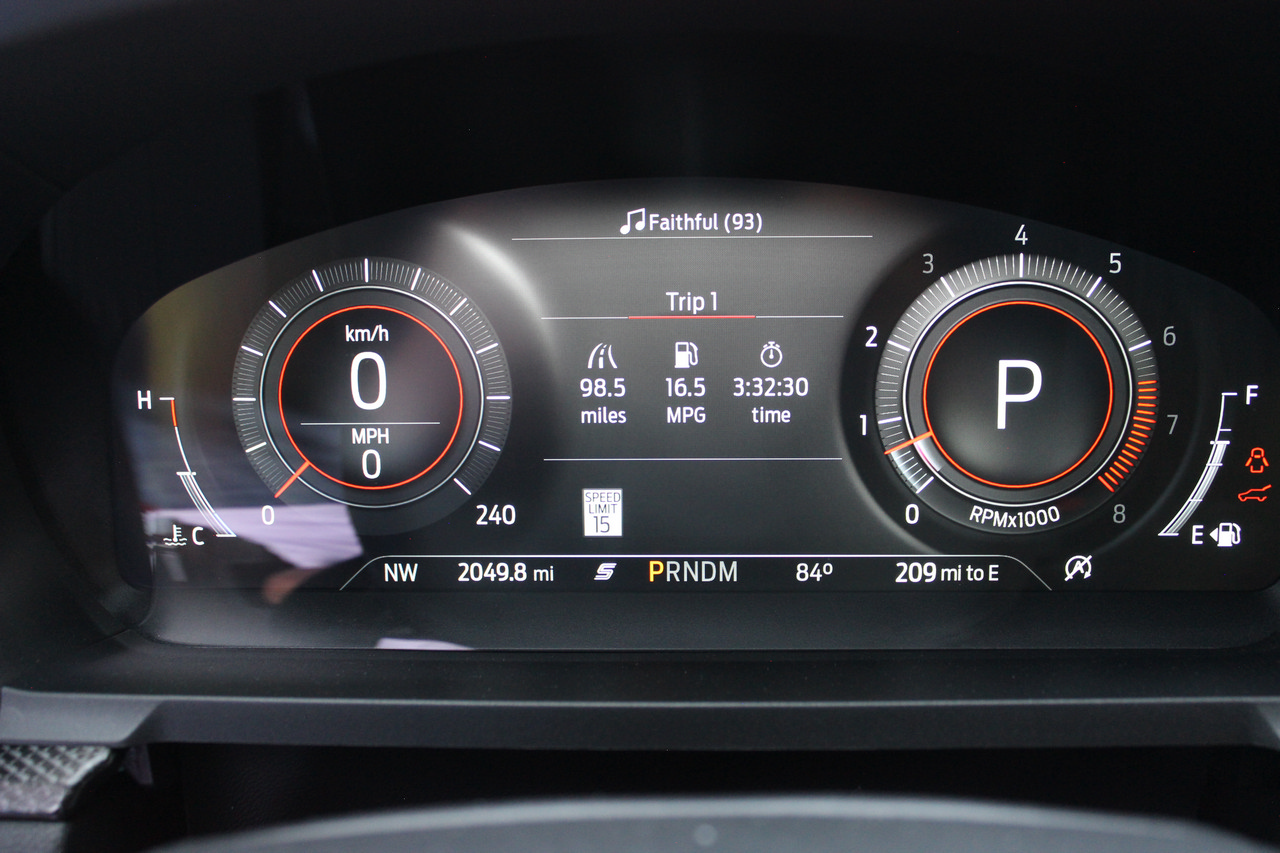 It starts with the digital gauge cluster, which has built-in preset displays depending on which drive mode you’re in. If you’re in mud/rut mode, the angle at which you’re currently travelling gets brought to the fore. If you’re in Sport mode, then you get a traditional two-gauge set-up, bathed in red lighting. Electronic driving aids, meanwhile, run the gamut from active lane-keep assist to adaptive cruise control (notice how the car graphic in the gauge cluster’s ACC distance indicator changes depending on which drive mode you’re in) but our favorite is this: enhanced active park assist. Simply slow down when looking to park, hit the park assist button and the system will automatically find a feasible spot and park, doing the steering and pedal work for you.

Not the most expensive, but 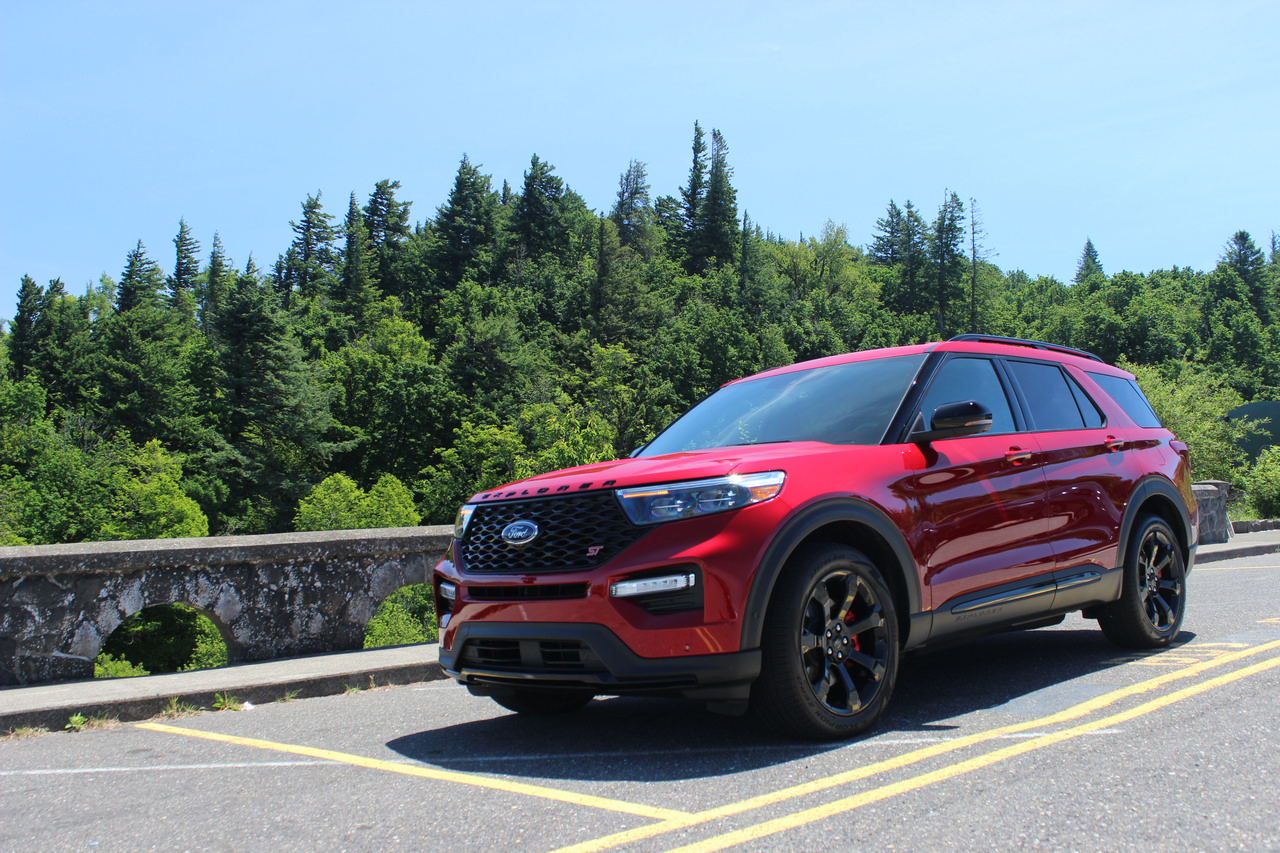 Those laurels go to the $64,599 Platinum addition, but the ST is not too far behind, ringing in at $59,099 before options. Essentially, Ford says that the Explorer line-up kind of has two top trims in Canada, depending on what you’re looking for from your truck: Glitz and glamour? Go Platinum. Power and panache? ST, please.