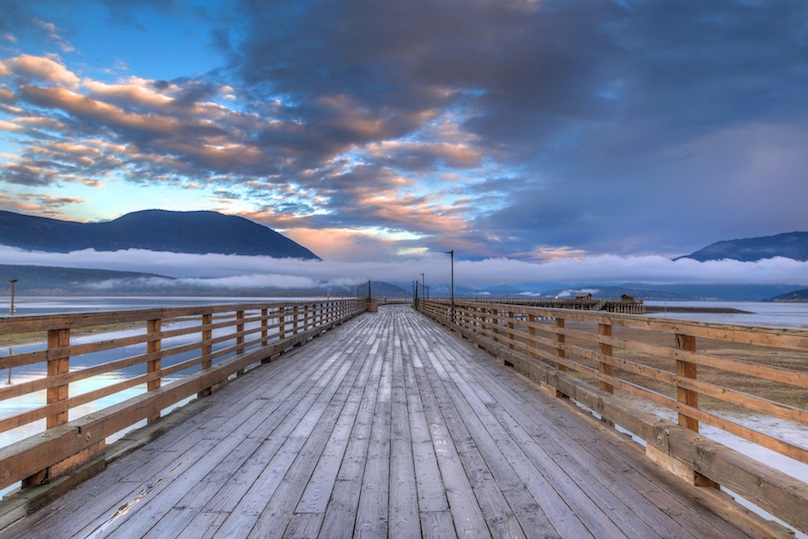 Half way wisdom in the wilderness

Half way wisdom in the wilderness

Thanks to an added hour via Pacific Standard Time on day 7, I had time to explore Salmon Arm, a small community that sits along the shores of a magnificent freshwater lake system. The Shuswap is a popular vacation destination with 1000 km of shoreline. You can rent a houseboat and tour the many arms and countless inlets, or you can try your luck at fishing for one of the bountiful steelhead or lake trout that call it home.

The town of Salmon Arm was as good place as any to restock my supplies of peanut butter and flashlight batteries, and before checking in to the campsite I took a walk on the pier located at the waterfront park.

Even though I was a day behind my original schedule thanks to a visit to my past in Calgary, the campsite I had reserved (for the night before) in Herald Provincial Park was still vacant.   For those who don’t know how first come – first serve camping works, I’ll give you a brief tutorial. You drive around until you find the perfect spot, jot down the number that’s on the post and then race back to the entrance to fill out a registration card before someone else nabs it. When I arrived mid-afternoon a day late, I was grateful my hand-picked site was empty. This park is a gem; it’s 14km east of the Trans Canada Highway in a little place called Tappen, B.C. and is located on the north shore of the Salmon Arm of Shuswap Lake.

When I pulled in to my site I could see the lake through the trees. The sun was on the mountains, I could hear the sound of trickling water from a small creek to my left and the sound of gentle waves rolling up on the rocky shore was directly in front of me. As I unpacked the trunk and piled my tent and bedding on the picnic table, I thought about the crazy drive I’d had over the past few days. Although it wasn’t snowing when I left Calgary that morning, parts of the drive further west were so bad that I saw a pickup truck with a 5th wheel trailer skid on the ice and flip over on an overpass.   I kept saying “thank you” to my three month old Chevrolet Cruze that handled the snowy mountain roads like a full sized 4WD, and although it was some of the worst driving I’d seen in a long time, my little car handled it like a champ.

The park warden came by to make sure I’d registered, and when I told him I’d actually paid for the night before but was unable to make it, he said I didn’t have to pay again. I told him it was due to the snowstorm instead of the truth about choosing dinner with an old flame over my campsite reservation. With thoughts of the night before still swimming around in my head, I bought a bag of firewood to add to the kindling I’d gathered, put on a pot of soup and set up the tent before taking a long walk along the shore at dusk.

I’d checked my phone too many times to count and still had not heard from “T”; not even a ‘it was great to see you too’ reply text. So, after the disappointment from his all-too-apparent lack of interest after our reunion, I decided it was time to put the past away and return to my ‘looking forward’ state of mind. I wrote 8 journal pages by the light of my lantern that night, and when I’d finished I felt 10 pounds lighter. I cried a bit, laughed a bunch, and smoked a lot. Somewhere around 11pm it was lights out, and for the first time during my week-long Canadian road trip, I slept like a baby and didn’t move an inch until first light.

I made coffee as quietly as possible, which is difficult when you have to open and close your car doors to get the supplies, took my travel mug and enjoyed a beautiful sunrise beside the water.   No one was else was on the beach, the sun had just crested the horizon and the sound of loons from across the lake echoed in the stillness.  Out of the corner of my eye I saw something small, brown and moving pretty swiftly in the water so I sat as still as possible to not scare it away. As it got closer I realized it was the head of a beaver; he swam close to the shore and came out of the water in front of me before he stopped suddenly. Do beavers have bad eyesight? Once he realized I wasn’t going to bother him, he came ashore, grabbed a long branch that sat a few metres from my feet and returned to the water with it between his teeth.   I marvelled at the design of the natural world as I watched him swim away propelled by his massive tail and how he could carry a large piece of wood between his razor sharp teeth.

Fact: The Canadian Parliament actually named the beaver as an official emblem of Canada in 1975. Beavers were nearly hunted to extinction thanks to the coveted pelts that sold in Europe which, along with other animal furs in the 17th Century, allowed the French and English Empires to reap massive profit from the spoils of the Canadian wilderness.

As I finished my coffee and watched a flock of geese fly overhead, it seemed to me that history was repeating itself in the 21st Century. The Canadian wilderness continues to be sold to the highest bidder who lives somewhere abroad; 400 years of exploitation of animals, oceans, forests for timber, oil, natural gas, and mining for gold and diamonds. When did profit and greed usurp human need?

The beaver is a good teacher and he stirred up a lot of things in my heart that day. Things that were far more important to the big picture of life than what had been on my mind the past 48 hours. I was reminded to give more than I take and to contribute what I could to making the world a little bit better than how I found it.

As I drove along highway 1 West I was glad to have 5 hours of mountain driving ahead of me and was delighted that I’d changed my original plan and not stay in Vancouver. Vancouver is beautiful as far as cities go, but I wanted to stay as far away from mass populations for as long as possible. It was only 480km to Horseshoe Bay from Salmon Arm, I could make the 5:30pm ferry with time to spare and be in Nanaimo by early evening.

My good mood and new-found insight grew bigger and more powerful as the day progressed. I’d never taken the ferry to Vancouver Island, I’d never been to Tofino, I’d never whale watched, I’d never camped beside the ocean and I was about to do all of those things over the next few days.

I thought about how I’d made it from Barrie to the west coast of mainland B.C. without a scratch, and I was proud of the 5000 kms worth of wisdom I’d gathered along the way. When The Proclaimer’s “I Wanna Be (500 miles)” came on the radio, I was glad to feel the joyful frame of mind I was afraid I’d lost in Alberta.

Nothing like a Scottish tune to put a wee bounce back in yer step lass.

A Canadian engineer was behind the development of...