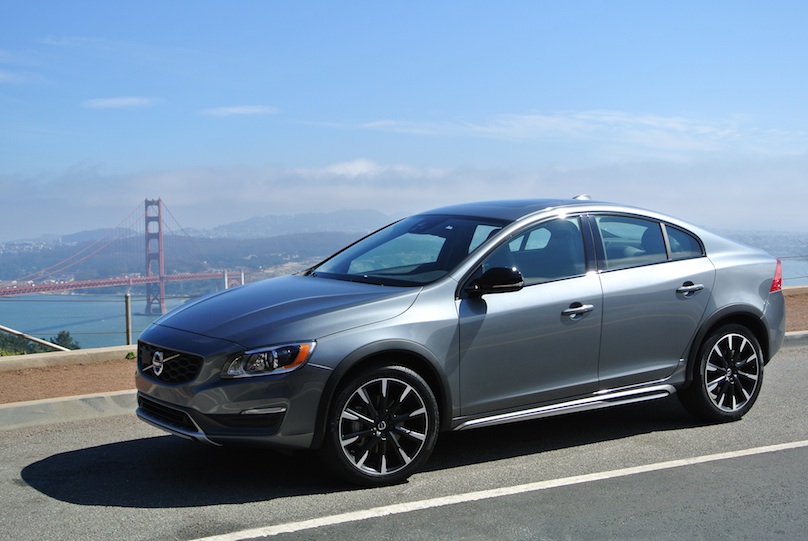 The marine layer engulfing the San Franciscan skyline is once again wreaking havoc on what would have been a picture perfect morning.

The bright and luminous red hue of the magnificent Golden Gate Bridge was downplayed by the overcast nature above.

Give it a few hours. The layer will burn off. Hopefully.

Looking at the large sliding glass doors at the lovely Cavallo Point Lodge, the architectural structure is still glorious, but something else sparkles in the distance.

If the Cross Country moniker sounds familiar, you know your Volvos.

Back in 1997, the first Cross Country came out and no one could really predict its popularity.

The ability to drive a comfortable car in the city and then head into the unknown was highly appealing.

Furthermore, this sedan caters to the weekend warrior crowd.

It allows for peace and serenity when stuck in the mayhem of urban commuting, yet gives you the freedom to venture off the straight and narrow when inspired.

Even though it could be argued that the S60 Cross Country is the more rugged sibling in the S60 lineup, it still has the benefits of a Volvo sedan; an impeccable sense of style inside the cabin.

That’s then complemented with a competent 2.5L, 5-cylinder engine that boasts 250 horsepower and 266 lb-ft of torque.

The snappy acceleration (0-100km/h in 6.6 seconds) via the six-speed “Geartronic” automatic transmission will keep your senses stimulated, even on a routine drive.

If you happen to be on some of California’s finest switchbacks, the variable, hydraulically power assisted, rack and pinion steering keeps you engaged with the car without feeling lackluster or lazy.

The increased ride height, I felt, didn’t detract from the way it carves out corners along the roads less – and frequently – travelled.

A common characteristic of all the Volvos I’ve driven are just how tranquil the driving experience is.

Whether it’s because of the seats that support and hug the body at all times, or the smoothness of the ride, the zombie apocalypse could be happening right outside the S60 Cross Country and you’d barely hear a peep.

You’d also know that you and the passengers would be very safe.

Though you’d have to disengage any kind of pedestrian detection if your goal is to knock out the unwelcome guests.

While the T5 engine might not be the quickest in the lot, there is, of course, the S60 Polestar performance sedan, which we had a chance to experience during the adventurous day.

It solidified that you can be clad in Rebel Blue, but follow the rules in every other way and still be fabulous.

Hot laps in this hot car further demonstrated just how exciting it can be to drive a Swedish sedan. Not that I needed that much convincing in the first place. I’ve danced with the Polestar before – that probably sounded much worse than I meant it! – and we had a lot of fun.

Then it was back to a milder reality.

As the day progressed, and the marine layer burned off, both the S60 Cross Country and the Golden Gate Bridge had their moments to shine even brighter than at the beginning of the drive.

It’s not a vehicle I could easily get sick of, even if the roads dictate otherwise.

RELATED: The 2015 Porsche Cayenne S and an Adventure in Whistler

Seven Summer Road Trips from Toronto for the Whol...