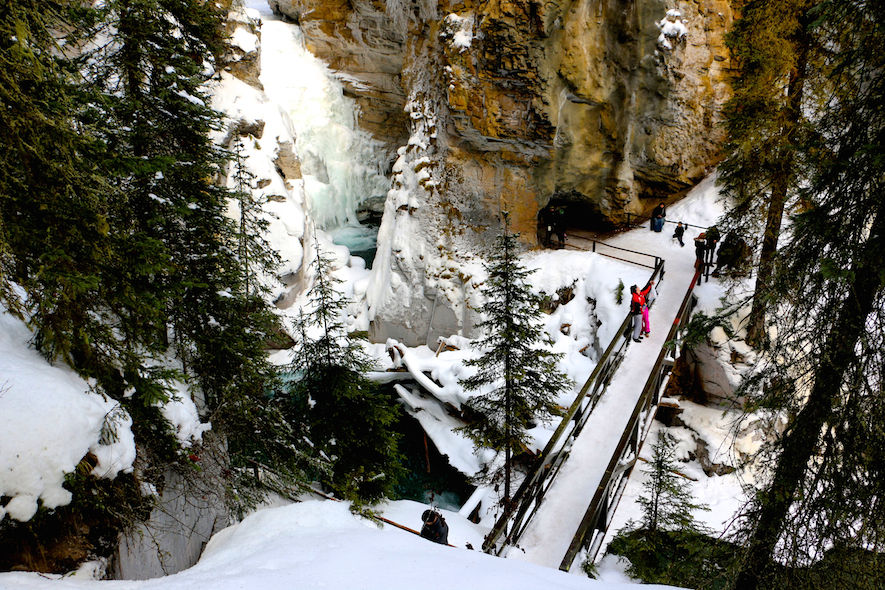 Explore Johnston Canyon this winter season, one of Alberta’s hidden gems. Pictures and tips on how to prepare and where to stay. 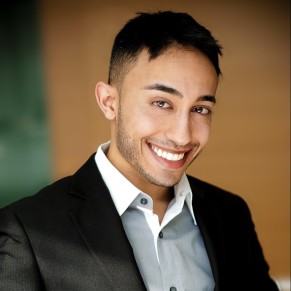 Just when I could feel the winter blahs start to set in, I knew I had to get out of the city and explore another part of my newly-adopted province, Alberta.

I was in luck – approximately a 2-hour drive north-west of Calgary (151km), in the heart of the Bow Valley Parkway, is a glittering oasis. Johnston Canyon is a popular day trip for tourists and city-dwellers alike, and is particularly breathtaking during the winter months. I’d heard about the myriad of crystallized streams and frozen waterfalls from a number of hikers who have made the trek in the past, eager for a change of scenery to escape the winter doldrums.

Prepping for the hike:

You don’t have to be a seasoned hiker to follow the trail, but there are a number of things you can do to prepare for the trip.

Here’s an idea of what to bring:

In terms of equipment, traction devices for your boots or shoes are often recommended (particularly as some of the trails are extremely slippery). Other hikers opt to bring along walking poles, which can be helpful when tackling the more steep terrain. Clothing-wise, it’s always best to wear layers on hikes like these, especially as the temperatures can drop to an average of -15°C and then bump up to -5°C during the winter months. (The day I visited the canyon, the temperature soared to 6°C). Nevertheless, it’s a safe bet to bring along a hat and gloves, just in case the weather gets chilly.

After throwing on a warm coat, some comfy boots, a well-stocked iPhone playlist, and a cup of hot chocolate for the road trip, I was good to go. I packed up my friend’s Ford Escape and threw my gear into the ample trunk. We then hopped into this five-seater and were on our way. 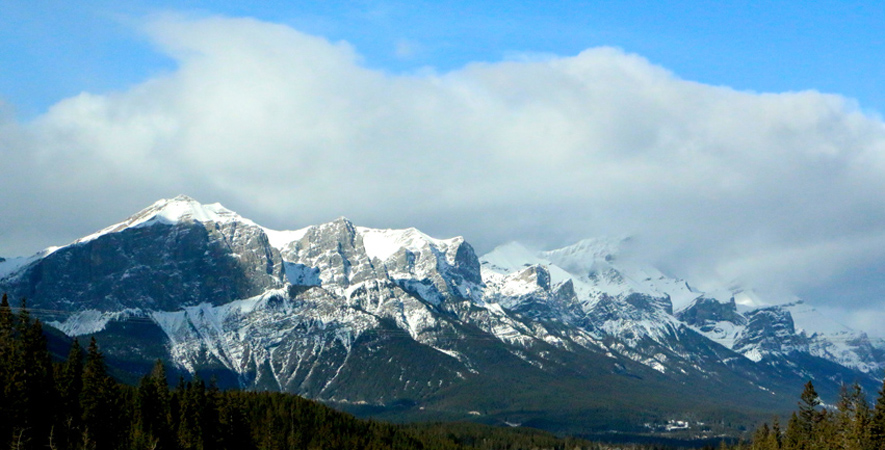 The trek to Johnston Canyon is one long stretch of beautiful open road. The Trans Canada Highway (Hwy 1 West) winds through rolling hills and scenic vistas, as the Calgary skyline becomes a speck in the rearview mirror. It’s not long before the gateway to the Canadian Rockies are within sight. 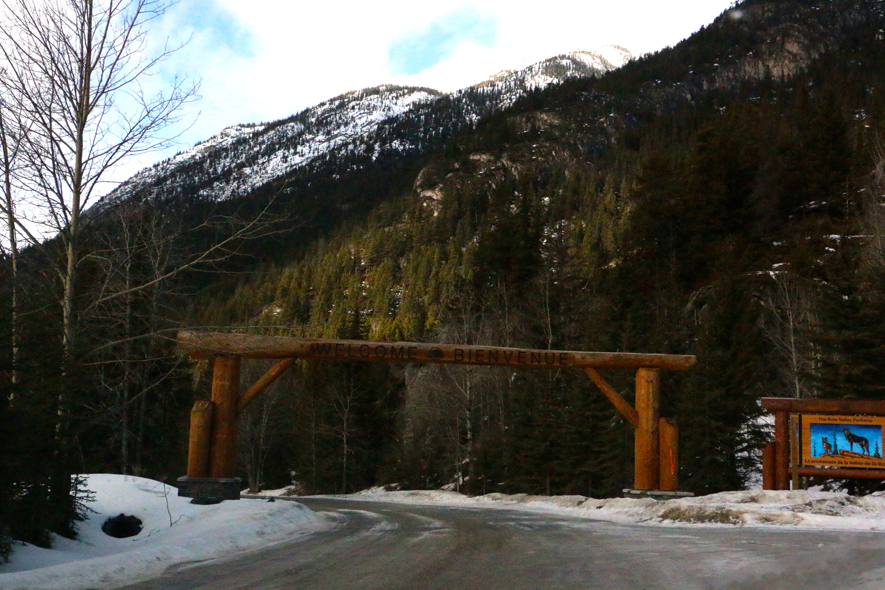 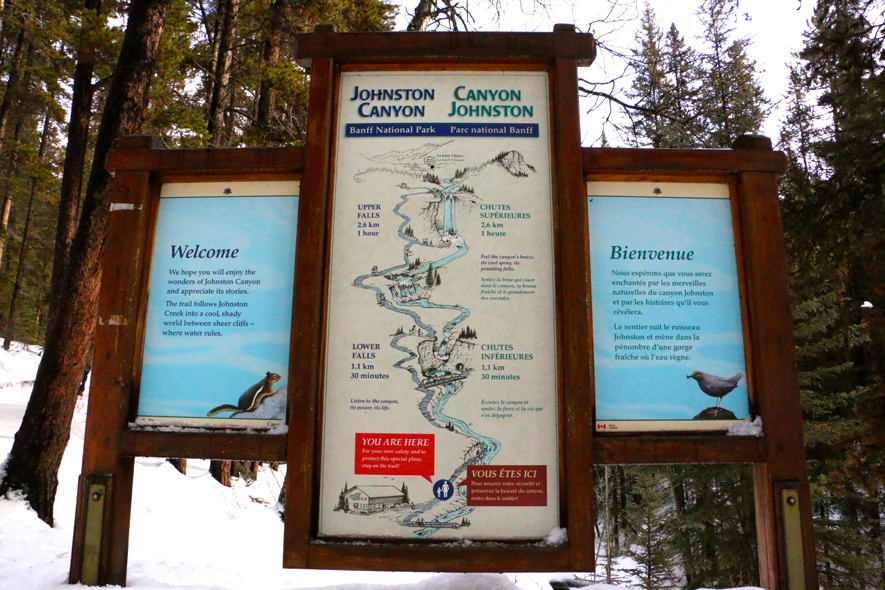 Many signs warning of wildlife in the area dot the trail route. However, due to the higher volume of hikers in the area that particular day, I wasn’t fortunate enough to spot any of the canyon’s inhabitants. 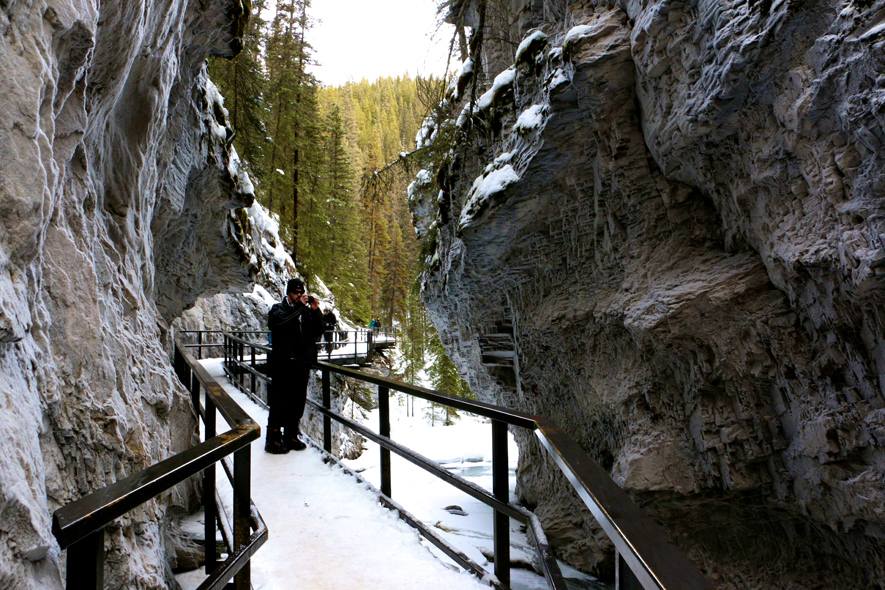 A series of steel catwalks lining the inner canyon walls and ice-covered pathways make up the trail to the upper and lower falls. At 2.6km (one-way) for the upper falls, it could take approximately one hour to reach the best vantage point. Some companies offer guided tours of the canyon, providing some grips for footwear, as well as some historical context on how the natural wonder was formed. 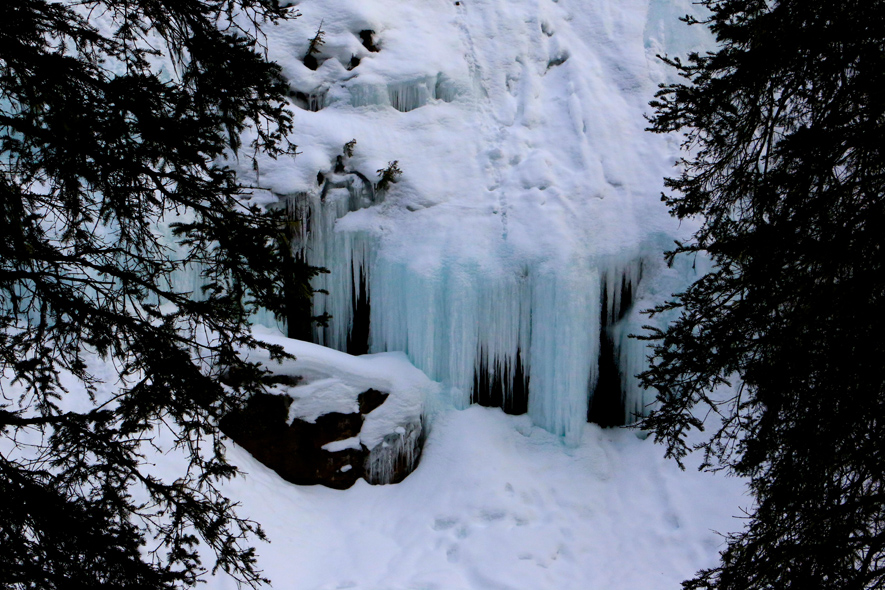 There’s much to see en route to the upper falls. Frozen creek walls and curtains of jagged glacier blue-tinged ice hang precariously over the edge of cliffs. 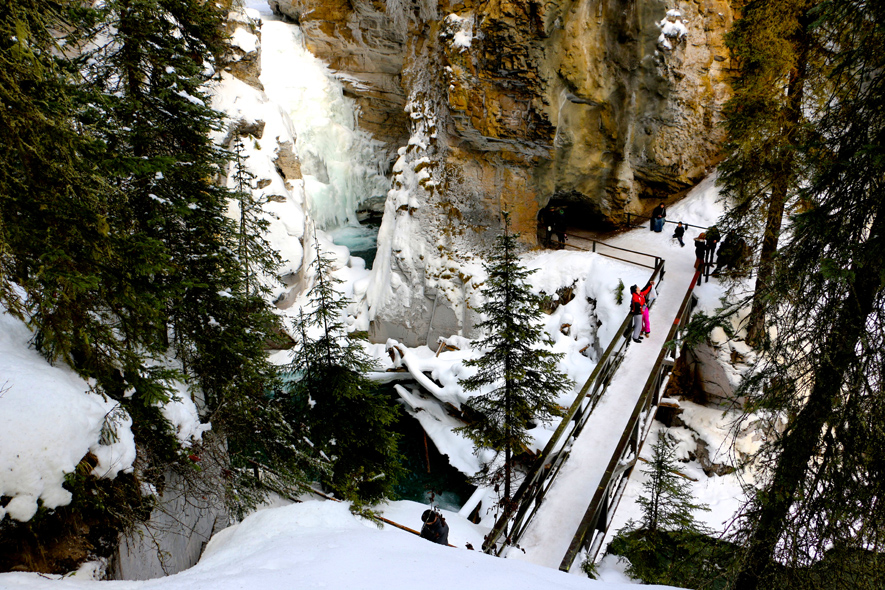 The trail cuts through limestone caves, with canyon walls coated with glittering icicles. 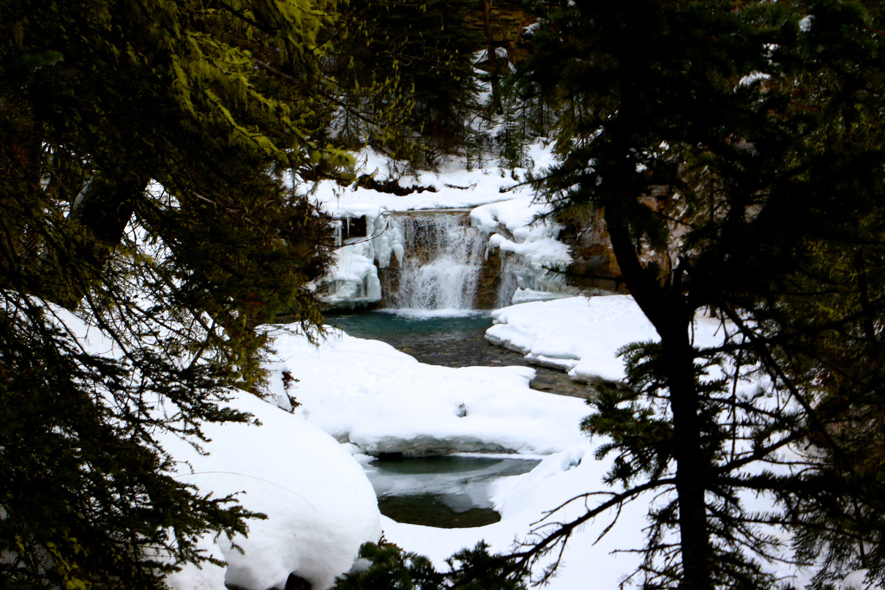 There are seven sets of cascading waterfalls frozen in time — some of which continue to flow relentlessly in spite of being partially covered in frost. 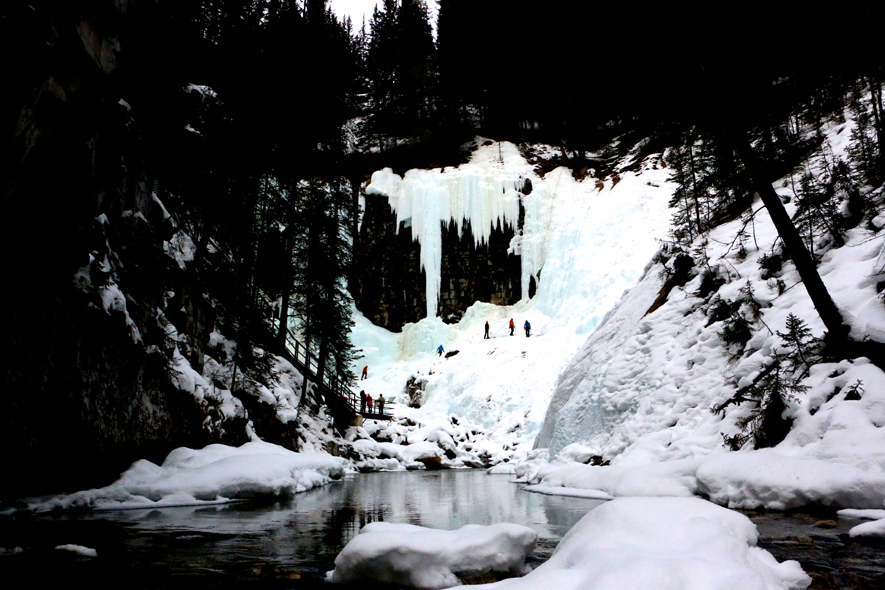 A majestic view of the Upper Falls. Capturing this shot meant straying from the beaten path and hiking down snow-covered terrain. Word to the wise: wear comfortable footwear! 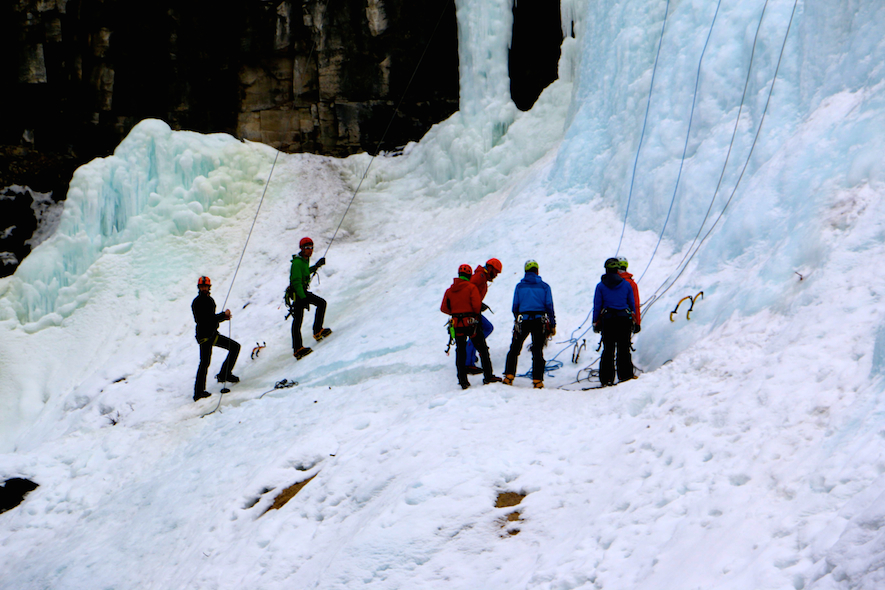 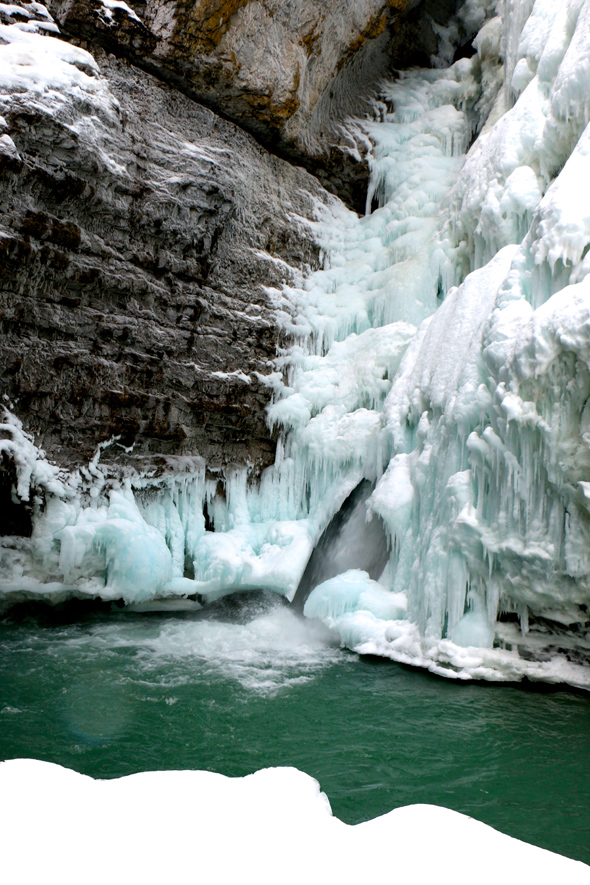 Towering peaks, pounding waterfalls, an untouched beauty. In the warmer months, you can continue along the dirt path beyond the upper falls until you reach the“ink pots” – six emerald-coloured pools filled with spring water. In the winter, much of that area is submerged in snow. 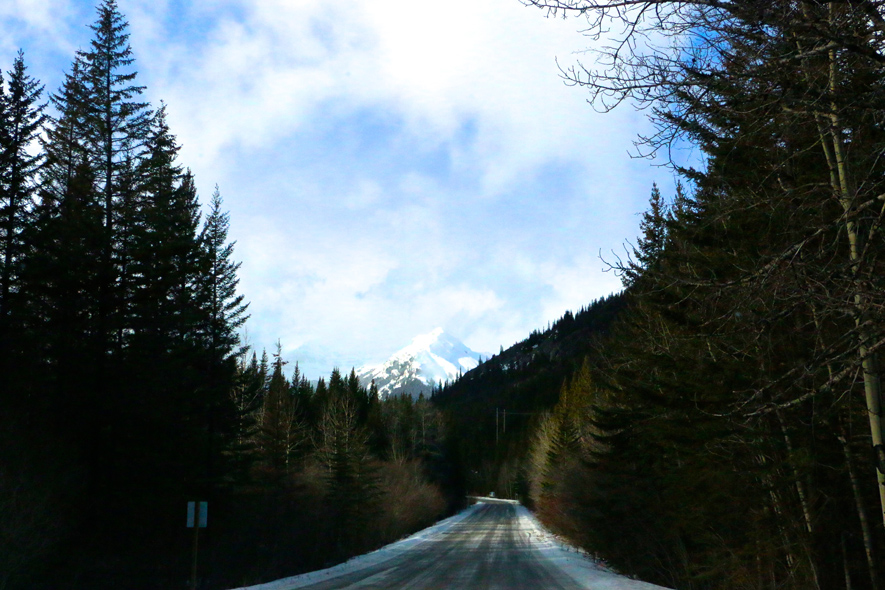 Taking in the majestic Canadian Rockies one last time on the drive back home to Calgary.

The hike itself wasn’t terribly difficult. Most other novice hikers, like myself, appeared to find the ascent quite easy, with the sole exception of certain parts where the incline became steep and slippery. Fellow hikers were in good spirits, including one older woman, who insisted “There’s nothing quite like seeing a waterfall surrounded by snow. It’s magical.”

Thinking of making your day trip an overnighter? There are plenty of great spots to spend the night, such as the nearby Johnston Canyon Resort and Johnston Canyon Campground. Further up the road, closer to the town of Banff, other favourites include the Delta Banff Royal Canadian Lodge, Fairmont Banff Springs Hotel, the Hidden Ridge Resort and Rundlestone Lodge.