The Pacific to the Peaks Part 3 - Final Descent

These are far from ideal skiing conditions – but with only two days left at the renowned lake, home to world-class mountains and equally notable après-ski gatherings, we refuse to miss an opportunity to venture up the mountainside in search of untracked runs.

AS we emerge from the tunnel that bores through the mountainside the windshield is splattered with rain and the road disappears ahead of us in the fog – the asphalt, paint and guardrails that dutifully follow the edge of the water are enveloped in the clouds that roll low across the choppy, windswept surface of Lake Tahoe.

These are far from ideal skiing conditions – but with only two days left at the renowned lake, home to world-class mountains and equally notable après-ski gatherings, we refuse to miss an opportunity to venture up the mountainside in search of untracked runs.

We rumble along the highway that hugs the edge of the lake, watching as waves break on rocky shores glistening with spray.

We rumble along the highway that hugs the edge of the lake, watching as waves break on rocky shores glistening with spray. Clad in ski gear and nestled into our stately black Dodge Durango, it’s about as much of a contrast as one can expect on a ski vacation. 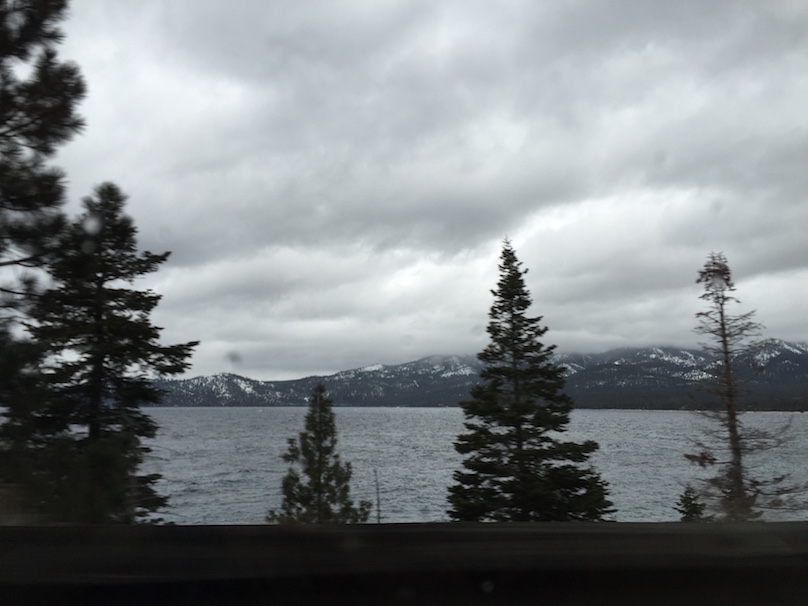 Nevertheless, as we hit town – South Lake Tahoe, that straddles the California/Nevada border – the telltale signs of life we’ve come to expect in this area emerge: neon signs beckoning gamblers into casinos, cheap motels slowly sagging into the side of the road and small clusters of vacation homes rising into the base of the mountains, clinging to the side of the ridges buffered by driveways and roads that snake through the towering California Redwoods.

South Lake Tahoe is a town with two stories – both distinct and shaped by the development of the region’s economy. For years, the town at the southern end of the lake served a solitary purpose – to provide the accommodations, sustenance – both food and drink – and related activities to Nevada’s gambling industry. Much of that is still intact today – the seedy motels, the all-day-breakfast diners, and the humming lights reflected in the snow tell a story of a rowdier South Lake Tahoe.

But with the growth of the ski industry at the lake, and an ensuing influx of cash from nearby San Francisco and surrounding boroughs, perhaps most notably Silicon Valley, luxury resorts, vegan restaurants and high-end retailers have put an affluent spin on the town’s seedy past.

We spend the day traversing the heights of Heavenly Mountain Resort in the bitter wind and occasional rain that sweeps across the mountainside blowing snow off runs and revealing icy hard pack. Nevertheless, through the mist and intermittent clouds a view of the stormy lake emerges – and once again, that’s enough to brighten our moods as we descend the slopes into the cover of trees. 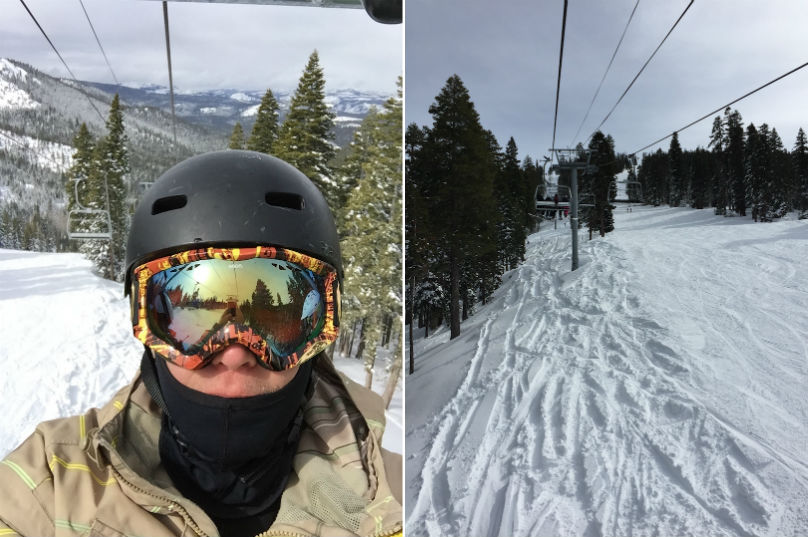 Retiring later that day after a leg-burning run from the top of the mountain to the parking lot, we drive along the main drag of South Lake Tahoe again, stopping in at California Burger, a local haunt with an impressive bar rail and a kitschy atmosphere serving hearty burgers and sandwiches. It’s loud and packed in the early evening, as locals and vacationers squeeze around tall tables to knock back a couple après-ski drinks or devour a quick meal before heading into the California sunset. 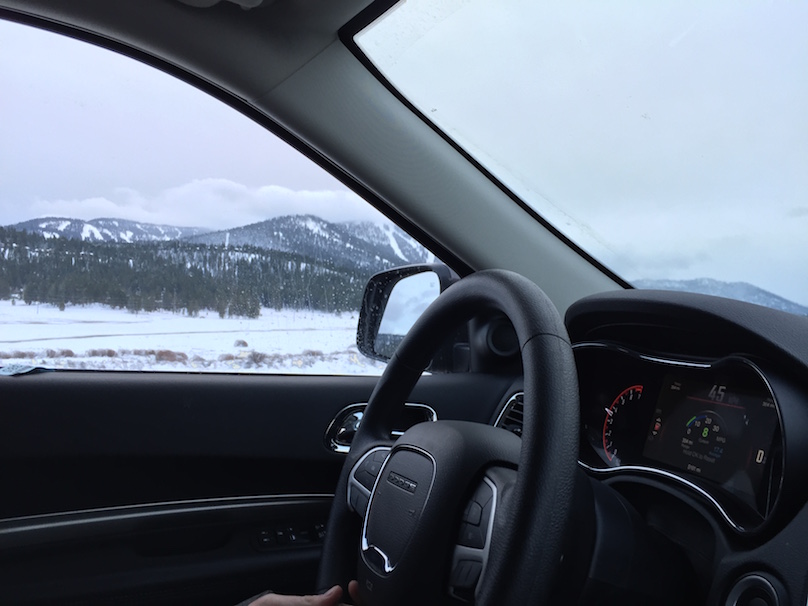 By the time we emerge from the clamouring restaurant the sun has peaked beyond the clouds as it descends over the mountains, casting a glow over the town’s main street. We glide along comfortably as the town slips away – soon we’re back on the highway, surrounded by trees stretching up the mountainside and the glimmering, placid lake.

It’s an idyllic end to our road trip through the Sierras – we bid the border towns, ski resorts and steep alpine roads farewell as we cross the Donner Pass heading west towards the coast.

The mountains retreat as we descend towards the farmland that stretches west towards the glimmering lights of San Francisco and the Bay Area – our trip is smooth and peaceful as the glow of the Durango’s lights.

By the time we roll over a bridge and enter a city, the windows are rolled down and the mild, salty sea air fills the car. Relaxed and reinvigorated, we turn off the highway and descend the off-ramp into the chaos of downtown San Francisco – it’s a far cry from the silent winter nights in Lake Tahoe, allowing me a chance to bask in the mild weather before hurtling across the continent to the frozen landscape of Southern Ontario.

ALSO READ: Towing to Sudbury in the 2015 Dodge Durango for a Snowmobile Adventure 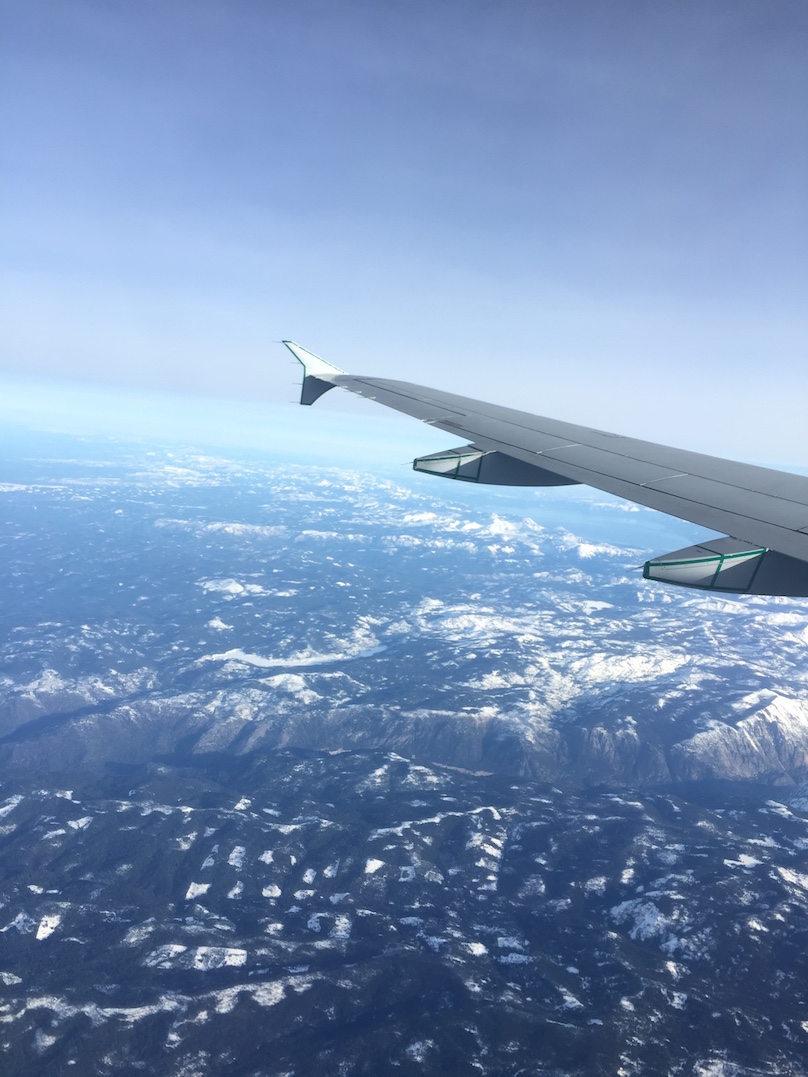