The Pacific to the Peaks Part 2 - Snowbound at Lake Tahoe

The aha! moment came to me as I strapped into my snowboard while gazing down at Lake Tahoe several thousand feet below

Part 1: The Pacific to the Peaks – A Journey into California’s Hinterland

The aha! moment came to me as I strapped into my snowboard while gazing down at Lake Tahoe several thousand feet below, which reflected the dark, ominous streaks of storm clouds that had gathered in a low formation over the lake and across the mountains that rise sharply from its deep waters. 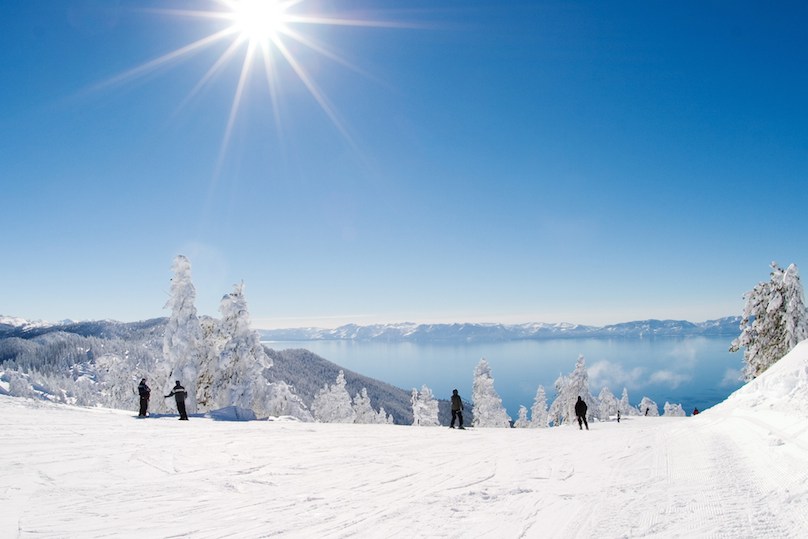 While the clouds slowly cleared and a singular beam of late-afternoon sunlight cast a glow over the dark, swirling waters of the lake, I breathed in the fresh alpine air and pointed my board down the mountainside. A feeling of exhilaration overcame me – something I’ve become familiar with as my passion for sliding sideways on a board has grown over the years.

The moment of bliss that followed, as my board floated through the snow while I navigated the trees that clung tightly to the ridge, was only underscored by the trials and tribulations we had undergone just to make it to the slopes at Diamond Peak ski resort that day.

The night before, as we convened by the crackling fire in a cabin in Incline Village, Nevada, a small community clustered in the mountains that protrude from the northeast end of Lake Tahoe, our plan was to head for Northstar-at-Tahoe at dawn in preparation for what we expected to be a seamless powder filled day. The plan was to wake early, eat a hurried breakfast and head out the door to reach the mountain before the crowds descended and the fresh snow became tracked out.

We watched the TV excitedly. A solemn meteorologist predicted heavy snowfall overnight in the region.

But when we woke, a perfect storm of human errors and unsympathetic nature ensued.

We ate, dressed, collected our snowboard gear and, after massively underestimating how long it would take to shovel out the formidable Dodge Durango we had enlisted for this trip, clambered into the truck and began descending the narrow, windy road that extends from the village to the main highway that curls around the lake’s north shore.

The Durango came equipped with AWD, which proved a God-send in these conditions. We ploughed through several feet of snow as we exited the shared driveway with ease, and pointed the SUV down the road.

Things went easily at first – maybe too easily. As I sat in the passenger seat, content to let my friend Tom handle the roads this morning, I felt at ease. We gingerly descended the road, following a caravan of cars and trucks likely making the same commute to the mountains on the opposite shores of the lake, in California. 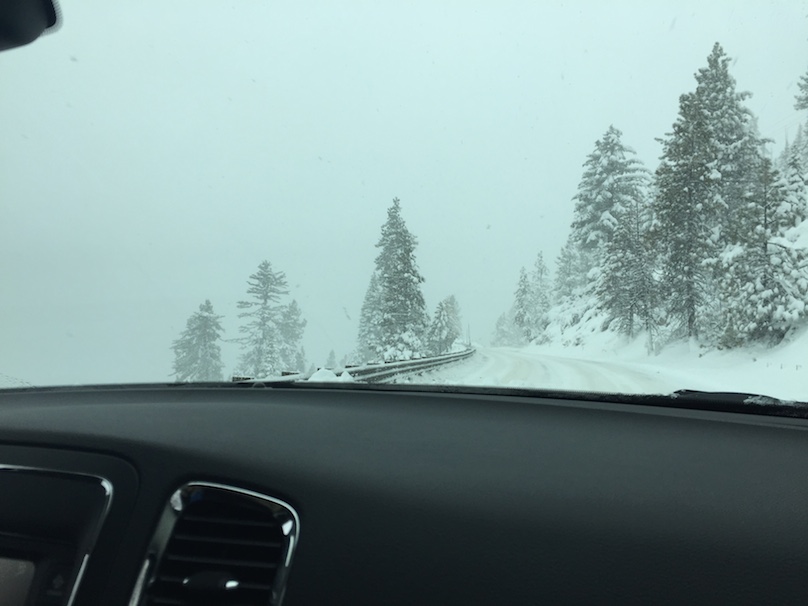 Tom glanced at me as we inched down the hill, following a pick-up truck. He stared at the road, then on the dashboard, before fixing his eyes on me in horror.

“My foot is on the brake right now.”

We were moving so slowly that it took me a moment to understand the gravity of the situation.

The convoy of vehicles ahead of us was slowing; a truck had lodged itself in the ditch and was blocking a lane of traffic, so oncoming cars climbing the hill and our group descending were taking turns passing each other in the remaining lane. This meant coming to a full stop.

Affixed to a sign, the lights confirmed our fears: Chains Required Ahead When Flashing.

It could have been comical if there wasn’t a very real possibility of causing further delays (and, potentially, insurance claims). As the cars ahead came to a stop and we continued our slow and measured descent towards them, our panic rose. Fortunately, several inches from the bumper of the truck in front of us, the Durango came to a stop. We breathed a collective sigh of relief.

Continuing onto the main highway proved an exhausting test of patience and a further extension of the tribulations we had just endured. The roads in Lake Tahoe are notoriously slippery; no salt is distributed on the frozen lanes to prevent it seeping into the lake. Chains are sometimes required for the treacherous passes that wind through the mountainside, especially during snowstorms. (Oftentimes a car equipped with AWD and snow tires is sufficient to avoid the expensive and time-consuming task of affixing chains to tires)

As the snow continued to fall and visibility worsened, we could barely make out the road in front of us. Nearing Tahoe City, an enclave that hems the shores of North Lake Tahoe, I spotted the dull blaze of flashing yellow lights through the mist and snow. Affixed to a sign, the lights confirmed our fears: Chains Required Ahead When Flashing. 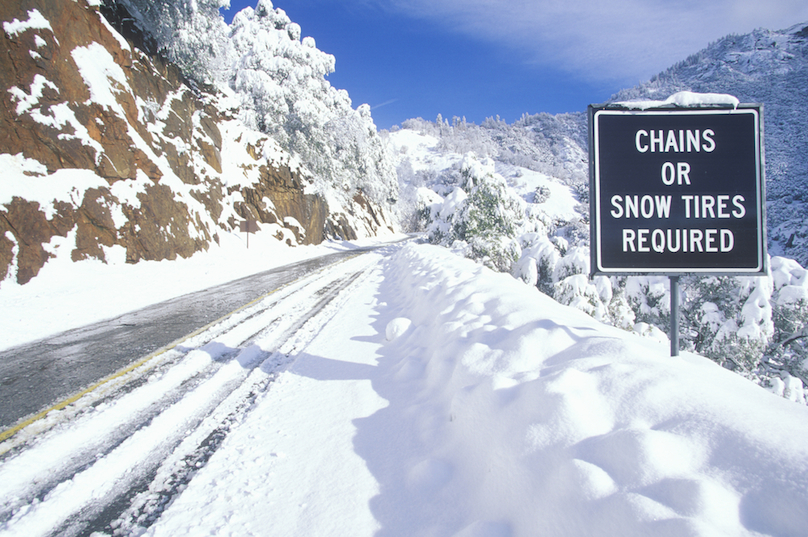 We pulled off the road at the nearest intersection to inquire about buying chains. Waiting on my friends to return from the nearest hardware store, I pulled up a road report on my phone. It wasn’t good news. The highway that separated us from Northstar was also requiring chains – and highway patrollers were inspecting cars along the way. That this only underscored our intentions, but again caused my spirits to sink. The chains would take time to install, something that was a precious resource as cars carrying eager skiers and boarders whizzed by on their way to slice through the coveted fresh snow.

As we struggled to affix the chains, I began to rethink the intelligence of my decision to pursue the mountains that day. The alternative, nursing a steaming cup of coffee and delving into a book while curled up by the fireplace in our Incline Village, Nevada cabin seemed idyllic compared to our current situation – standing in a parking lot, struggling with tire chains while the snow blanketed us in a constant embrace of wetness.

But we persevered, and eventually the chains were strapped around the Durango’s tires. By this time, the storm’s wrath had dissipated and the sun peaked through the dark clouds in several prominent streaks across the sky, as shafts of light penetrated the cloud cover and created dazzling patterns on the shadowy, choppy waters of the lake. 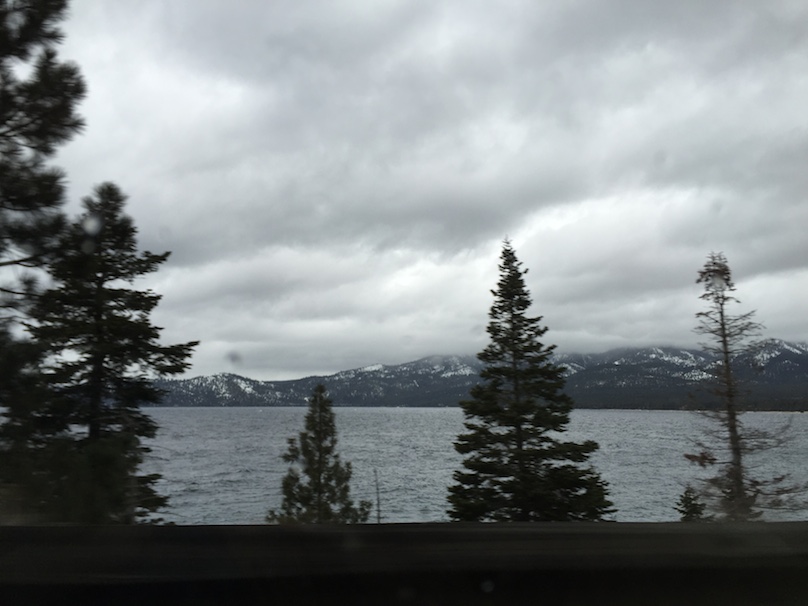 It’s now late morning and we have a decision to make – continue on through the weakening storm to California and enjoy the remnants of the powder, or turn back to the relative comfort and proximity of nearby Diamond Peak Ski Resort, a ridge that rises from Incline Village to offer breathtaking views of the lake.

We opt for the latter, hoping to make a quick return and spend as much of the day as possible on the hills. Continuing on through the storm offers the allure of an afternoon at legendary Northstar-at-Tahoe, but we decide to save that for a full day of riding.

Rumbling through the snowy streets of Tahoe City and back onto the main road, our Durango lumbers patiently through the muck on the roads. The AWD system works seamlessly and the chain-clad tires grip the road closely. Folk music pumps softly through the crisp speakers. Staring through the windshield from the comfort and warmth of the passenger seat, I finally relax and envision the stormy views from the summit of Diamond Peak.

If I were anticipating an easy vacation, I would have flown to the Caribbean.

The early dawn of the Sierra Nevada Mountains glisten. The deep, clear waters of Lake Tahoe shimmer, reflecting the first rays of sunlight. A light breeze ripples through the trees on the mountainside and another inspiring morning begins.

On these days, you can catch a glimpse of the towns that stretch along the pristine shores of the lake that divides Nevada and California from the peaks of the nearby mountains. To the south, a two-line highway ambles through the woods near the shore, occasionally curling towards the waters before tucking back into the shelter of California redwoods as it ventures further along the lake’s vast expanse towards South Lake Tahoe. 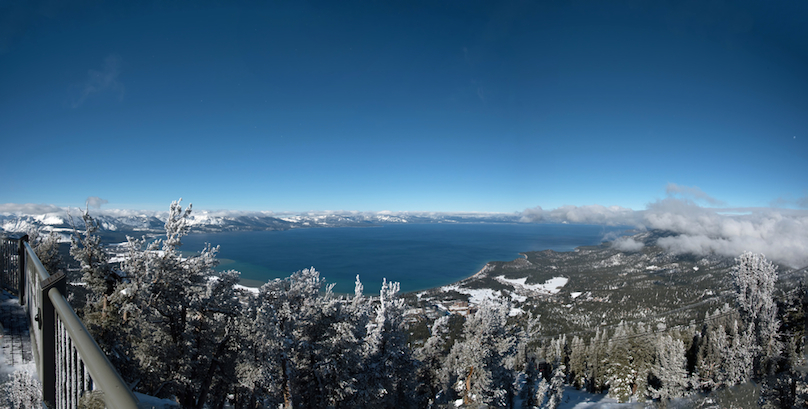 Fortunately, this was not one of those days. Foregoing the dazzling views that have cultivated a loyal – and extensive – following of local vacationers, who flock to the mountains and lake as fervently in winter as in summer, we experienced Tahoe in its true and intrinsic winter beauty during the height of a winter storm. And that’s how I like it. If I were anticipating an easy vacation, I would have flown to the Caribbean.