The new, longer, lower and wider 2017 Imprezas are built on a new global platform and feature a host of upgrades and new technologies.

But for Subaru customers, the new 2017 Impreza, recently unveiled at the New York International Auto Show, delivers a package that is both bigger and better. 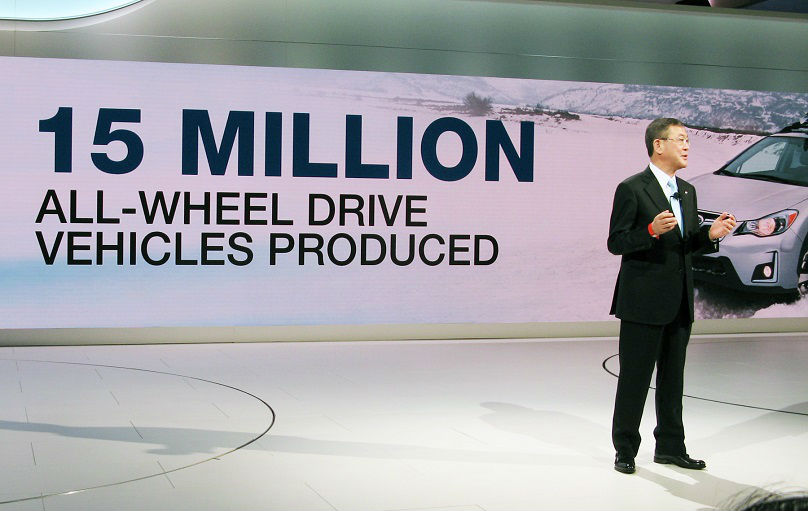 Subaru’s popular entry-level compact builds on a new global platform designed to deliver increased levels of safety and dynamic stability, along with improved ride and handling.

The new chassis, a foundation for almost all future Subaru products, incorporates high-strength steel and new architecture that will absorb 40 per cent more crash energy than its predecessor, while contributing to a 70 per cent increase in body rigidity and a 50 per cent reduction in body roll, with subsequent improvements in tackling noise, vibration and handling.

During the debut, Subaru also made boasts about a lowered centre of gravity, a bit of a surprise because that has always been an Impreza strength, thanks to its low-slung boxer engine layout.

But, yes, as Kazuhiro Abe, the project manager, confirmed to me later offstage, part of the 30 mm reduction in height is due to the car sitting 10 mm closer to the ground, as designers seek to reduce drag and improve handling and fuel economy.

Add in a 37 mm increase in width and the Impreza strikes a wider, lower and more aggressive pose on the road. Wheel sizes also move up a notch, ranging from 16- to 18-inch sizes, compared to the current range of 15- to 17-inch wheels. 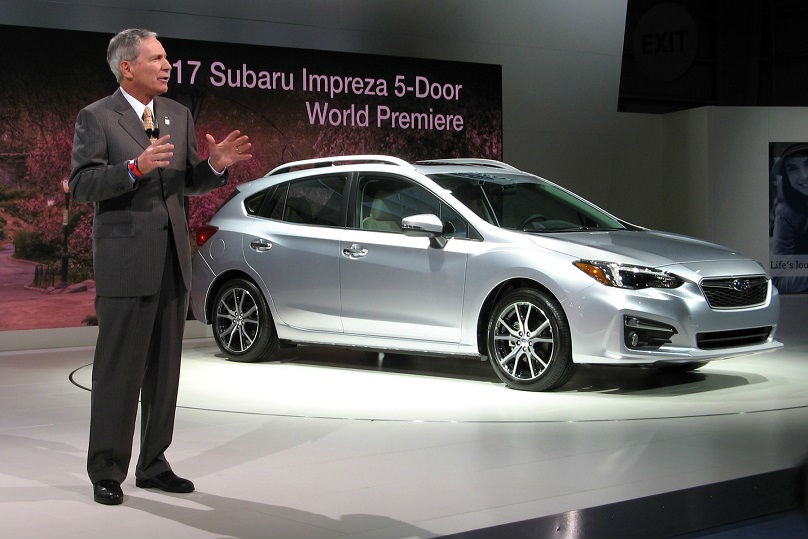 A more sculpted body design is not exactly a radical styling change but the Impreza looks handsome with the keener edged details of its new upright hexagonal grille and “Hawkeye” headlights.

This new, fifth generation 2017 Impreza harnesses a revised version of Soob’s FB 2.0-litre four-cylinder, horizontally-opposed boxer engine, upgraded with direct fuel injection and other enhancements. Power is up slightly to 152 hp (+4 hp) although the 148 lb/ft of torque rating remains unchanged. Mileage results have not been released yet but Subaru predicts an improvement in fuel economy, due to the direct injection and improved aerodynamics. 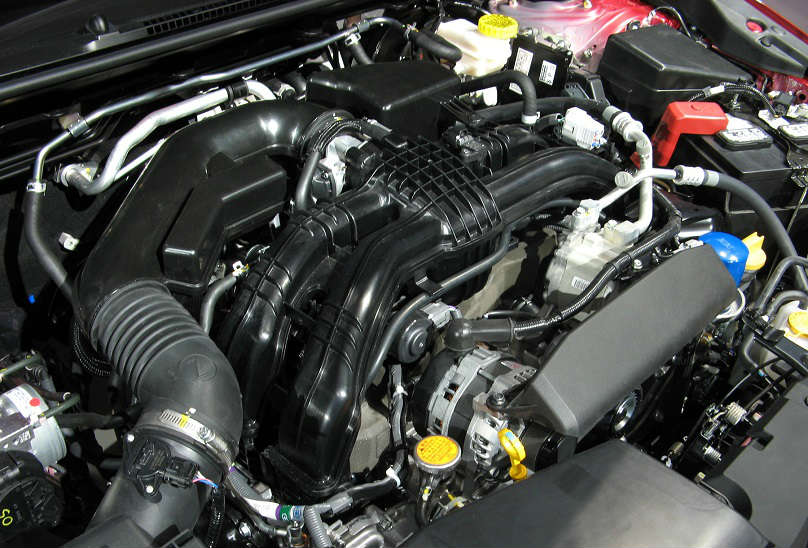 For 2017 models, Subaru introduces new driver-assist technologies, including steering guidelines added to the rear view camera image and a reverse automatic braking system that can detect obstacles behind the vehicle.

Add up all those dynamic factors and features, along with award-winning EyeSight safety system, and the new Impreza seems to set the design language and technological groundwork for the next generation of Subaru vehicles.

The 2017 Subaru Impreza four-door sedan and five-door hatchback models will come in four trim levels – 2.0i, Touring Package, Sport Package and a new Sport-tech Package that replaces the Limited trim. 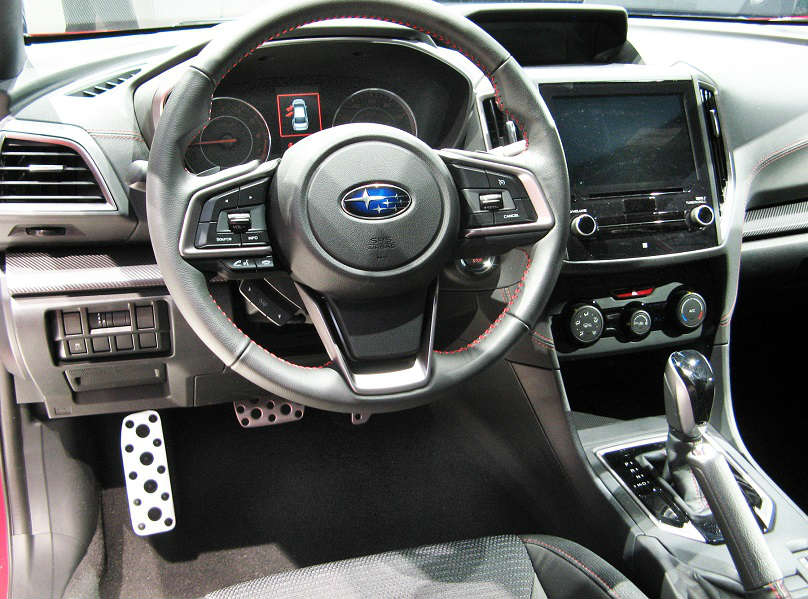 Subaru has one of the most loyal customer bases in the industry, understandable when you consider that 96 percent of the vehicles sold within the last ten years are still on the road today. But even the faithful were pleading for an uptick in interior design, a request fulfilled with a redesigned centre stack with larger vents, new seats and, among other items, a definite improvement in interior textures and component qualities.

Even the base 2.0i model comes well-equipped with standards including tilt/telescopic steering, power group, heated mirrors, a multi-function display and 6.5-inch multimedia touchscreen and more, while upgrade trim levels add substantially more content respectively. A few new features to wrap up with include an available 8.0-inch touchscreen with navigation, Apple Car Play and Android Auto apps, along with a brand new premium 432-watt harman/kardon audio system.

To sum up, there were, frankly, flashier unveilings at the New York International Auto Show but the debut of the 2017 Impreza lineup played well to a crowd that also heard the added announcement of a $500 million investment and 1,200 new jobs at the Lafayette, Indiana assembly plant, doubling production to 400,000 units by the end of 2016 and building virtually all of the Imprezas for Canada and the US. 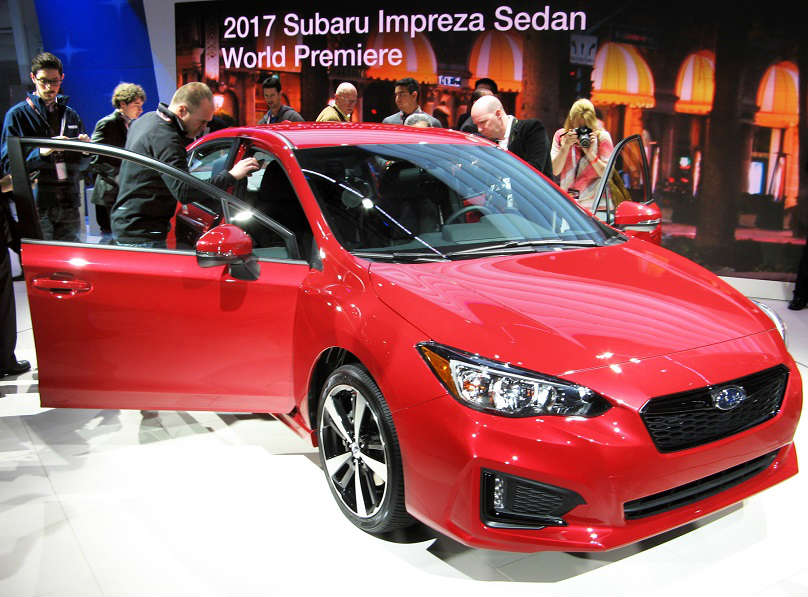 Currently, Impreza prices range roughly between $20-$30K and we will learn later if this bigger and better 2017 Impreza can maintain a price spread within that window, along with more specific dimensional and fuel economy measurements as we get closer to the Impreza’s arrival in Canada later this year.