The new 2017 Porsche 718 Boxster has lost two cylinders, gained a turbocharger and received a new name.

The new 2017 Porsche 718 Boxster has lost two cylinders, gained a turbocharger and received a new name. We set off from downtown Toronto to the beauty and tranquility of the world’s largest log cabin in Montebello, Quebec, just over 500 kms away. We started our drive at the base of the CN Tower and the Rogers Centre, two iconic Toronto landmarks. It turns out that the new name of this car is a very old one. Between 1957 and 1962, Porsche raced the 4-cylinder 718 with great success, including class wins at the legendary 24 Hours of Le Mans in 1958 and 1961.

We wanted to see if life with a 4-cylinder turbo, which replaces the naturally aspirated 6-cylinder engine, has helped or hindered the driving experience of this entry level open-air 2017 Porsche 718 Boxster.

Because all Boxster’s are mid-engine two-seaters, there are two trunks, one up front and one in the rear. There was plenty of room for our bags and equipment but one does need to pack efficiently. 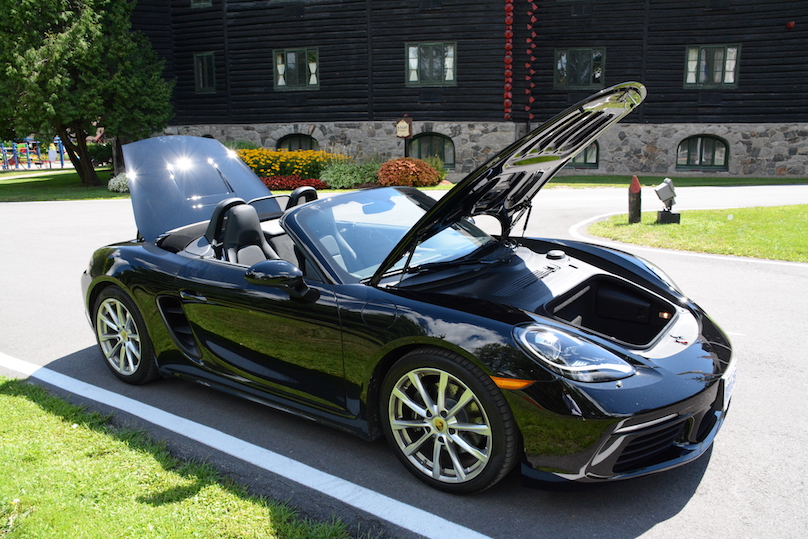 The 718 Boxster is the second least expensive 2-door Porsche behind the 718 Cayman, which starts at $61,500. The base 718 Boxster starts at $63,900. Major options on our car included the 7-speed dual-clutch Porsche Doppelkupplung (PDK – $3,660) which features both automatic and manual shifting modes. The PDK delivers extremely quick gear changes with virtually no power interruption to the rear wheels. It is not without its balkiness around town at slow speeds but once out on the open roads, it works extremely efficiently. Our car was also equipped with 19” S rims ($2,250), Porsche Active Suspension Management (PASM – $2,050), Navigation ($1,980), Bose Surround Sound System ($1,130), Connect Plus ($1,510), 14-way power sport seats ($2,650) and Premium Package ($1,570). Total MSRP climbed to $82,545 including the $1,085 delivery, processing and handling fee

Also Read: Preview: Porsche 718 Boxster is proof that it can do more with less

Out on the highway from Toronto to our destination which was about 500 kms/five plus hours away, the 718 Boxster delivered mile after mile of driving enjoyment. On the major highways we kept the well insulated and lined soft-top up, windows closed and air conditioning on (usually sacrilege in my books but I had a passenger whose rights to a civilized environment, I had to respect). It was for that reason that we got off of highway 401 at Belleville and headed north on slower quieter winding roads. We dropped the top and windows, turned off the A/C and really enjoyed the driving experience. 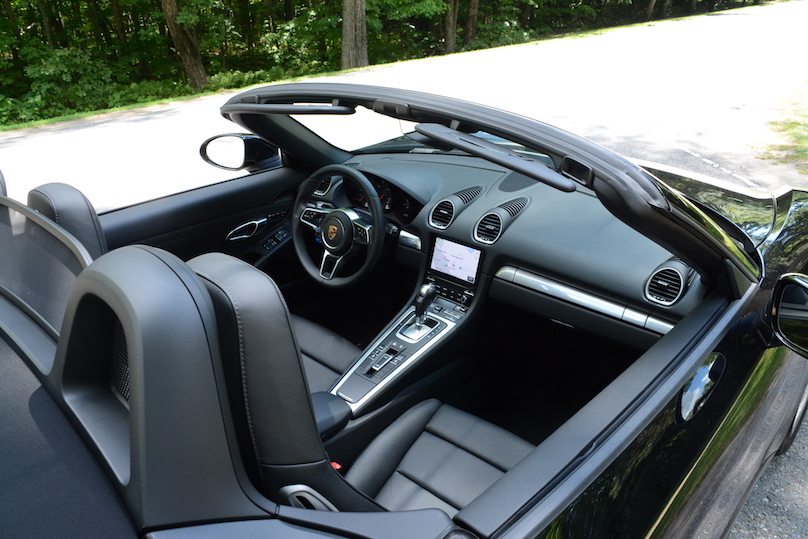 Pushing the Sport button transforms the exhaust note from refined to ruckus and definitely adds to the driving experience, especially when the top is down at sub-highway speeds (it didn’t seem necessary to have the added noise while cruising on the highway). When you put the gear shifter in drive and push it to the left into manual mode, you can play with the paddle shifters or the +/- with the gear shifter and generate all of the enthusiast sounds you like. On the gas, off the gas, up and down through the gears, you can make this little 2.0 litre horizontally opposed 4-cylinder 300 hp engine entertain, both audibly as well as delivering plenty of performance to the pavement.

One very entertaining aspect of the combination of stop/start and the PDK is that the engine shuts off while you are still moving. As you approach a stop the engine shuts down and you roll to a stop in complete silence. I really enjoyed playing with that to see how far I could roll without any power. My take on this is that Porsche makes performance cars intended for performance/enthusiast drivers who aren’t going to be concerned at all that they are rolling along in silence, which is especially noticeable in a convertible with the top down.

Our combination of Porsche navigation and phone app GPS took us on an unexpected but very pleasant ferry ride along the way. There are several ferry crossings along the Ottawa River that run between Ontario and Quebec and back. They are incredibly efficient and quite fun to try.

About six hours after we set out we arrived at the Fairmont Le Château Montebello , the world’s largest log cabin located in the small village of Montebello, Quebec on the picturesque Ottawa River. The hotel was built in 1930 as a private club and constructed in just four months by 3,500 workers using 10,000 hand cut red cedar logs. For 40 years it was the private retreat of the Seigniory Club whose elite membership included Canadian businessmen, politicians, and foreign dignitaries including Prince Rainier and Princess Grace of Monaco. It was taken over by Canadian Pacific Hotels in 1970. 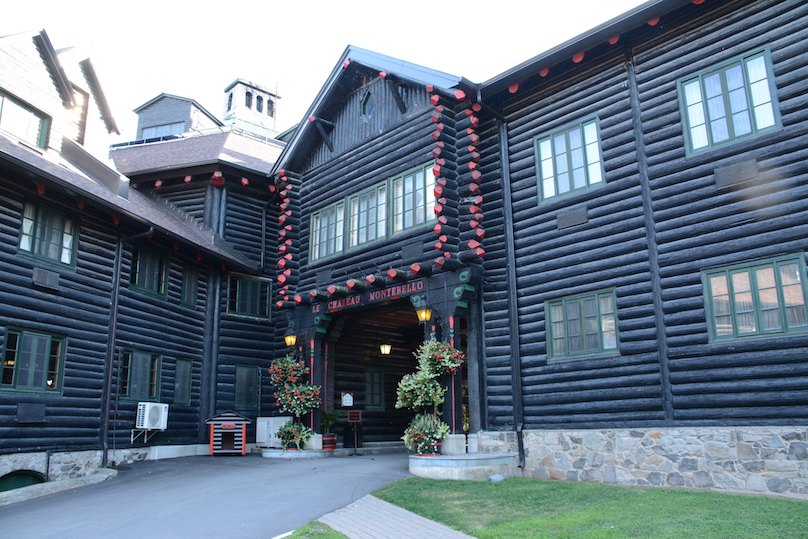 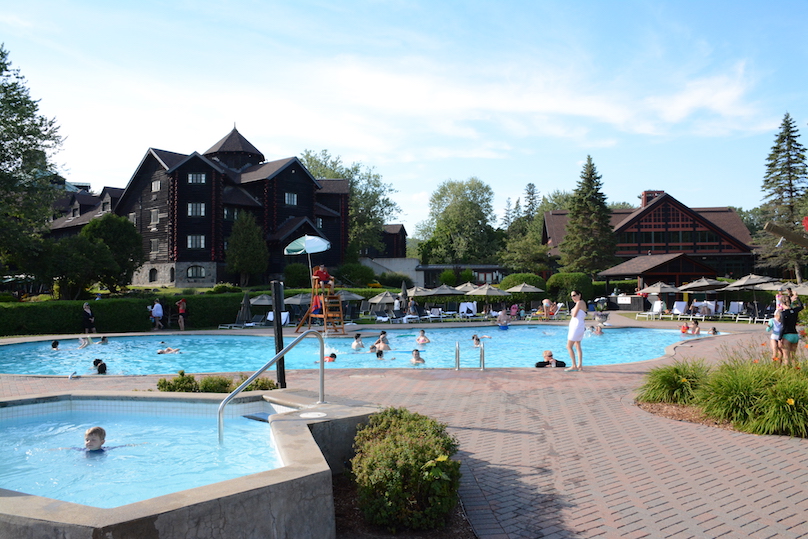 The hotel was the site of the 1981 G7 summit attended by Ronald Reagan, Margaret Thatcher, Pierre Trudeau and François Mitterrand, many of whom have had hotel rooms named in their honour. In 2007 the North American Leaders Summit was held there with Canadian Prime Minister Stephen Harper, US President George W. Bush and Mexican President Felipe Calderon.

Rather uniquely, guests can arrive at the hotel by car, boat, helicopter or floatplane. We chose to arrive in a nice new shiny black Porsche, and one quick and fun ferry ride. 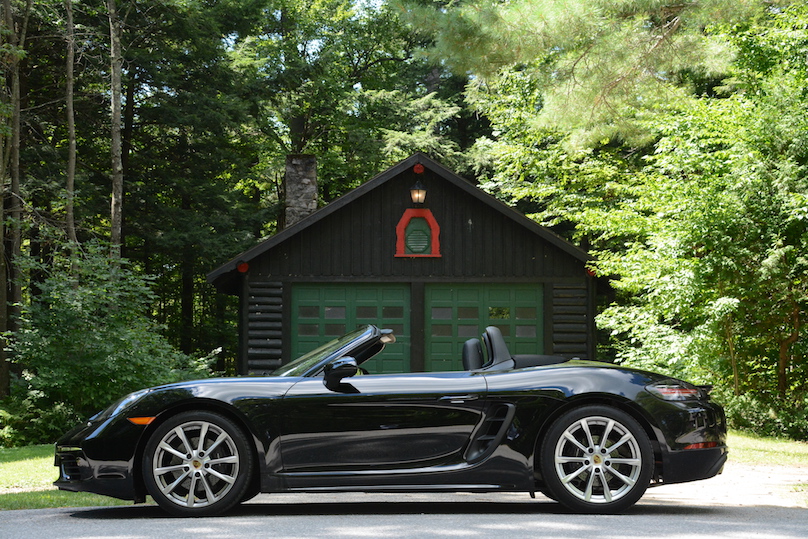 After spending one week with this car and logging about 1,300 kms on it, my takeaway is that every time you twist the key with your left hand, a Porsche tradition dating back to its racing heritage at the 24 Hours of Le Mans, you are embarking on an enjoyable exotic car driving experience. It made all of the right sounds and all of the rights moves, which always seemed enhanced with the top down and the wind in your face. Personally I might opt for the manual transmission because it offers balk-free absolute control over the drivetrain, but the PDK is obviously more useful for other drivers and according to Porsche it generates better fuel economy (11 l/100 km vs 10.5 l/100 km with the PDK city, 8.3 l/100 km vs 8.0 l/100 km with the PDK highway). If you are using this car as a daily commuter in a big city, you probably don’t need to step up to the S model. The rule of thumb is that convertibles spend less time on the race track and more time cruising with the top down. Could the 350 hp S version emit better sounds from the exhaust than the base? Maybe, but our base model never felt like it was lacking in enthusiasm or entertainment value.

One nitpick is the heater switch for the Heated Multifunction Steering Wheel ($540 option), located at the bottom of the steering wheel out of sight behind and between the two spokes. I can’t tell you how many times I inadvertently turned it on and off during my trip, but it was too many. I’m surprised that Porsche would do anything that would impede your ability to put your hands anywhere on the wheel. I guess over time you would get used to avoiding that part of the steering wheel but it didn’t seem very Porsche like to me. The steering wheel is the central component of driving a car. You should be able to put your hands anywhere on it at any time and not worry about accidentally turning the wheel heater on or off.

The 718 Boxster is a great entry to the world of open-air Porsche driving. Do you need to spend the extra $14,100 and go from the base to the S model? Typically more power equals more fun, but in this case I would argue that on a warm and sunny day any Porsche 718 Boxster will deliver a really fun and rewarding driving experience. 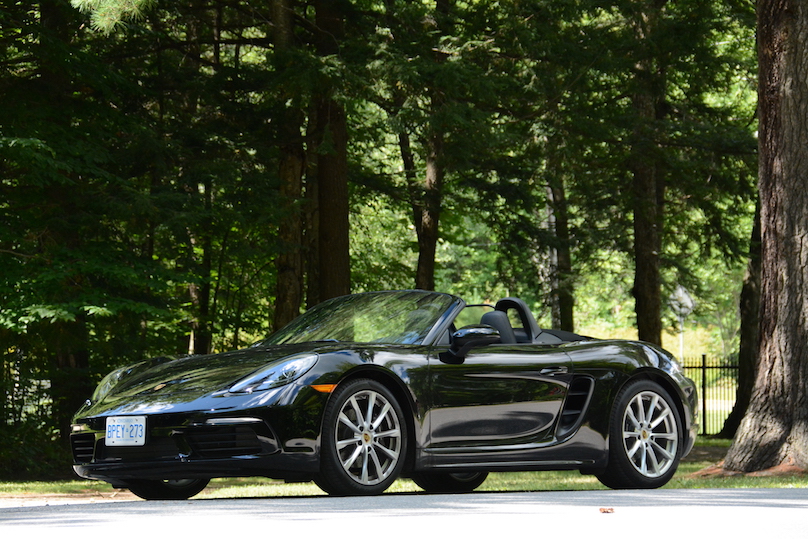