NORRIS McDONALD writes: Lots of motorsport news to catch up on this Monday morning. So here's some quick hits on a whole lotta stuff.

Late-breaking news: Canadian motorsport legend Al Pease died Sunday in Tennessee, where he lived for many years. His passing follows closely that of Oliver Clubine, another Canadian road-racing pioneer. We will have more on these two gentlemen later in the week. 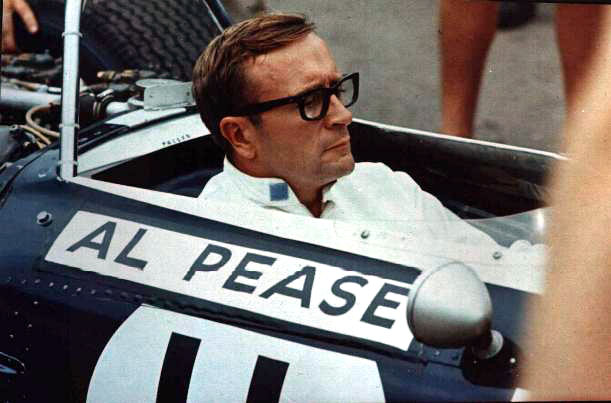 Lots of motorsport news to catch up on this Monday morning. So here’s some quick hits on a whole lotta stuff.

You don’t often see a NASCAR Sprint Cup race end under yellow any more, but you saw one Sunday – if you were watching the Aaron’s 499 from Talladega, that is.

Most of the time, NASCAR works it so there’s a green-white-checkers finish but Denny Hamlin took the white flag at Talladega and that’s as good as the checkers. If the white flag comes out, the leader only has to complete the lap for the finish to be official and that’s what happened.

NASCAR tried to leave the green on till the finish but there was a piece of bumper on the speedway just past the start/finish line and I guess they didn’t want anybody to hit it. So out came the yellow.

Greg Biffle finished second, with Clint Bowyer third. There were many crashes, including at least two Big Ones, and a large number of leaders and lead changes. Among the leaders was Danica Patrick, who led for a half dozen laps or so near the start of the race. Those are the first Sprint Cup series laps she’s led since Daytona. She also became the first woman to lead a race at Talladega.

Not too long after the start, she fell to the back and never recovered, as did Dale Earnhardt Jr. It was very warm at Talladega and some cars just couldn’t handle the heat.

For a complete rundown of the race, please click here.

Two bits of news about Monster Energy Supercross, one piece good and one piece not so good. First, the good news. Kawasaki’s Ryan Villopoto won his seventh race and put an exclamation point on his title-winning Monster Energy AMA Supercross season before a sold-out crowd (35,509) at Sam Boyd Stadium in Las Vegas on Saturday night. At the green, Kawasaki’s Jake Weimer won the race to the first turn but was quickly passed by Villopoto on the opening lap. Red Bull KTM’s Ryan Dungey passed Weimer on lap two, and his teammate Ken Roczen took over third place the following lap. That’s how they finished the race and the season, with Roczen passing James Stewart for third place in the final standings. . . .

Now the bad news. After years of sellouts or near-sellouts (just under 50,000) at Rogers Centre in either February or March, there will be no Supercross race in Toronto next winter. The 2015 Monster Energy Supercross schedule that was released last Friday does not have a Toronto stop on it. I have tried to get an explanation but for whatever reason  the PR people haven’t gotten back to me. Want a guess? I think it’s because first, Rogers, and then Bell cancelled the Speed Channel and the Monster Energy Supercross doesn’t have television coverage in the Toronto area. Big league motorsport, of which Supercross is right up there, is all about sponsorship and cross-promotion and that means television. No TV, no live performance. Supercross is on Fox Sports Channel, which is not allowed onto Canadian cable or satellite systems.

Good news for talented young Canadian sports car driver Kyle Marcelli of Barrie. He will race for the remainder of the 2014 season with Scuderia Corsa’s No. 64 Ferrari 458 Italia GT3 in the TUDOR United SportsCar Championship. He co-drive his first race with ex-F1 pilot Stefan Johansson at this weekend’s Continental Tire Monterey Grand Prixat Mazda Raceway Laguna Seca, finishing 17th overall and tenth in class.  Renger van der Zande and Mirco Schultis won the race in a PC ORECA FLM09. The headline event was won by Johannes van Overbeek and Ed Brown in a Prototype 2 HPD ARX-03b/Honda. Jordan Taylor and his brother Ricky finished second in a Corvette DP. The Chip Ganassi Racing Ford EcoBoost-Riley driven by Scott Pruett and Memo Rojas was third.

Not such good news for Robert Wickens, of Guelph and Toronto. The swift Canadian had a miserable outing with Mercedes-Benz in the first race of the 2015 German Touring Car Championship (DTM). He finished 18th. None of the Mercedes drivers were competitive, if that’s any consolation. . . .

Every week, Team Penske sends out a little video called the Penske Files. Click here for the one that landed in my mailbox on Friday. This one is called “how Helio Castroneves goes about preparing for a race.” Cute. . . .

Anybody planning to attend the Grand Prix du Canada in Montreal in a little over a month, and who don’t yet have tickets, had better get cracking. Grand Prix organizers announced late last week that Grandstand 1, across the track from the pits and garages, is now sold out. There are still tickets available in most other grandstands but they are going fast. Phone 514-350-0000 24/7 to purchase tickets or go to www.circuitgillesvilleneuve.ca. . . .

Speaking of ticket sales, the Honda Indy Toronto is now selling single-day tickets. As everybody knows by now, the Honda Indy weekend features two races – two complete points-paying races. There are some people out there who think, though, that you have to purchase a ticket for both races. Not so. Sure, you can go to both races but if one is your limit, you can choose to go Saturday or Sunday (Friday practice and some qualifying is free). Go to www.hondaindy.comfor information and pricing. . . .

Several of the GTA-area short tracks are open for the season, or about to open. The NASCAR Canadian Tire Series for stock cars kicks things off at Canadian Tire Motorsport Park on Victoria Day weekend in just a few weeks – that’s three-time national champion Scott Steckly’s Canadian Tire-sponsored car, above – and this is a reminder that drag racing is also ready to go. Some of the finest drag racing anywhere will get under way for 2014 with the RPM Magazine/Lucas Oil MAYHEM at the BEND Presented By Mickey Thompson Tires May 16-18 featuring the Pro Modified Racing Associiation, the Quick 32 Sportsman Series and the Pro Bike and Sled Series. That’s at the Grand Bend Motorplex, by the way. . . .

Formula North 2014 is hosting a day-long seminar on motorsports at the Barrie Molson Centre on Thurs., May 22, between 9:30 a.m. and 4 p.m. Five speakers, including Charlie Johnstone, president of the Honda Indy Toronto,  Michael Royce, former Technical Director of the Chrysler-Lamborghini F1 Program and Suzanne Royce, chief scrutineer of the ACCUS-FIA, will appear. Cost is $15. Click here for more information and to reserve a spot. . . .

That Nationwide Insurance deal with Dale Earnhardt Jr. is $30 million for a total of 38 races over three seasons. I am going to devote a column one of these days to the insanity of these deals. . . .

NASCAR confuses me. They say, “have at it, boys,” and then when the boys “have at it,” they fine them. Marcos Ambrose was hit for $25,000 for socking Casey Mears in the face after Mears grabbed him by the arm to “talk to him” after the race last week in Richmond. Mears was fined $15,000. This is why I’m confused: that dustup was on every American TV network last Monday morning. I was on a week’s vacation and was surfing the channels and ABC, CBS, CNN, etc., all played up the fight. You can’t buy publicity like that. Crashes don’t do it anymore. TV likes dustups. The only thing that would give NASCAR more publicity is if Danica Patrick won a race. Since that is unlikely to happen, boys having-at-it are NASCAR’s bread-and-butter. If I was in charge, I wouldn’t be fining them. I’d make sure they were paid a bonus. . . .

I still consider the Indianapolis 500 the greatest race in the world but my loyalty is often put to the test. I think it’s appalling that Honda and Chevrolet, for instance, will only produce enough engines for 33 cars. And that one of those 33 drivers will be Pippa Mann. Please. And that only one chassis manufacturer is allowed. For the 100th anniversary of the 500, which comes up next year, it would be so refreshing if they opened everything up to anyone who could build chassis and/or engines to specification and you had upwards of 100 cars entered. It won’t happen, but it should. . . .

The Canadian Motor Speedway has a new logo. “Our logo is very important because it needs to make an immediately positive first impression. We will continue to create additional versions going forward for the different types of product lines we have identified, “ offered CMS Executive Director Azhar Mohammad. “Fans and the media have become very familiar and comfortable with our original insignia over the years, so we wanted to be consistent with the key aspects and images of the initial version. I like this new design a great deal, and I am confident our fans will agree with me. It’s Canadian…it’s modern and it’s racing which says it all. In the very near future, we will integrate our fans to help us create additional designs which will truly make it a community based initiative lasting for generations,” Mohammad added.