Nissan's IMs Concept is Their Electric Autonomous Car of the Future

IMs promises sports sedan like performance and an electric range of over 600 kilometres.

DETROIT, MI – In close to a decade 380,000 Nissan Leaf EVs have found homes globally making it one of the best selling electric cars on the market, and one of the first to really take a battery-powered vehicle into the mainstream.

Nissan has set its sights now on an electrified future with plans to have 8 EVs in production by 2022 and an ambitious goal of selling a million electrified cars, which includes plug-in hybrids, by that time.

Revealed to media today at the 2019 North American International Auto Show, Nissan gave us a glimpse of its vision of the future of electric cars.

The new IMs concept is not a typical sedan, and it’s not really a crossover either but rather straddles the line somewhere between the two. They call it an “elevated sports sedan” and it’s part of their new design language. The theme here is more straight lines and broad flat paneled sides with less sculpted surfaces.

It has a long wheelbase and lacks a traditional B-pillar giving a very open lounge-like interior that will make ingress and egress a cinch for passengers. 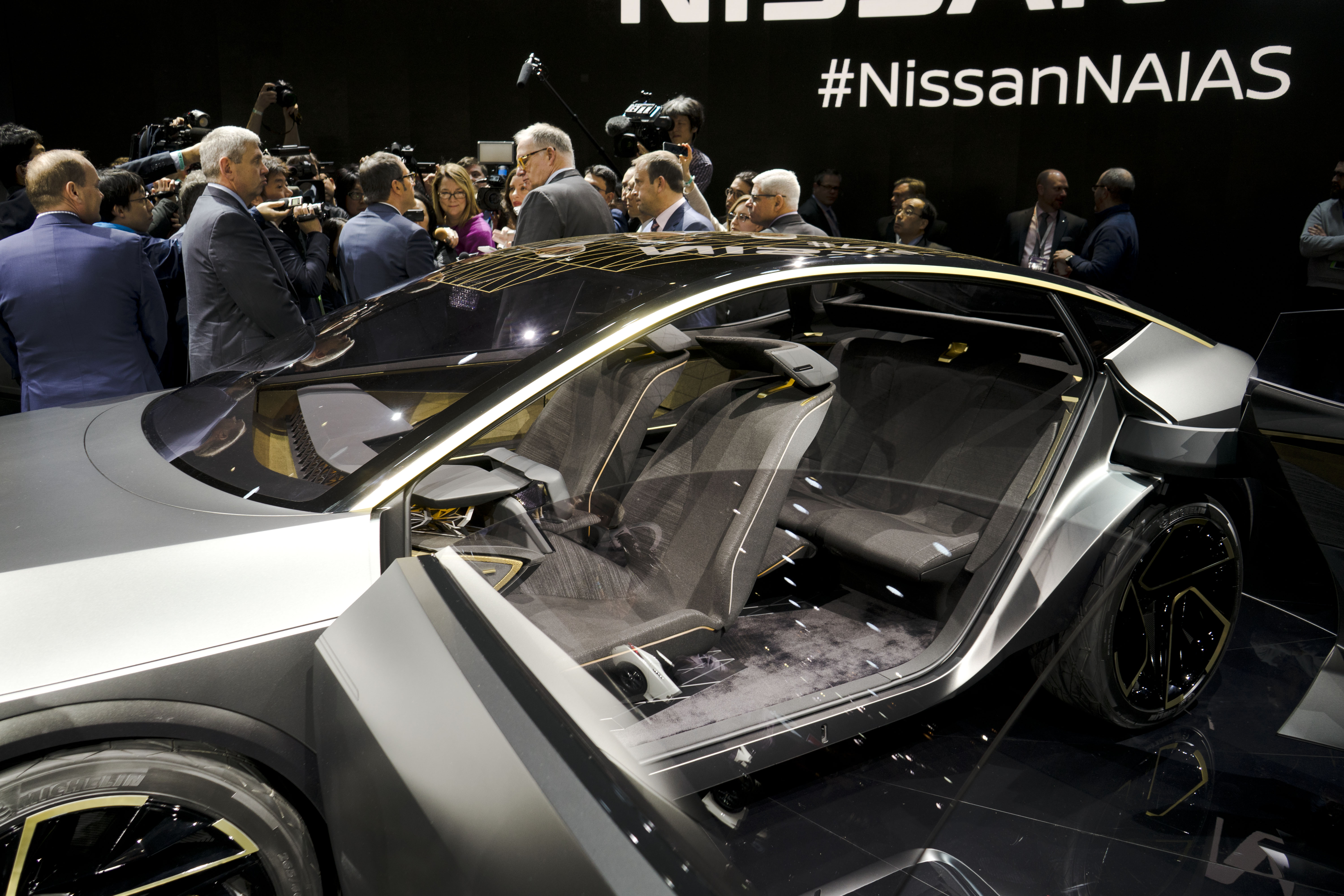 Being a fully electric vehicle there is no need for a traditional grille, but the signature Nissan V-motion grille has been mimicked with LED lighting accents.  A horizontal light band in the front and holographic rear tail lamps give the concept a very futuristic look. Nissan North America Chairman, Denis Le Vot describes the IMs as “the future of EV in one simple silhouette.”

Squared fenders jut out from the body at all four corners giving this concept a unique look. It’s a styling flourish that I have not seen before but one that is said to enhance the aerodynamics.

Cheating the wind is a very important thing for EVs to maintain efficiency and the IMs has a full underbody tray and an optimized front spoiler and rocker panels coupled with those cool fenders to reduce high-speed lift while providing effective downforce.

Power will come from dual electric motors, one per axle, and will pump out 483 hp and 590 lb-ft of torque.  A large 115 kWh battery pack can be rapidly charged according to Nissan and will give the IMs a range of over 600 km, alleviating any fears of range anxiety associated with current EVs on the market. This means that you can drive from Toronto to Montreal without having to stop.

That open interior is said to take its inspiration from a modern Japanese home or what Nissan calls “Japanese futurism”.  The theme here is focused on autonomous driving where the D-shaped steering wheel retracts when the driver wants to go into self-driving mode. The driver’s seat will then turn around to face the rear passengers allowing for easy conversation.  The lack of a centre console lends to an open and airy atmosphere allowing occupants to kick back and relax. 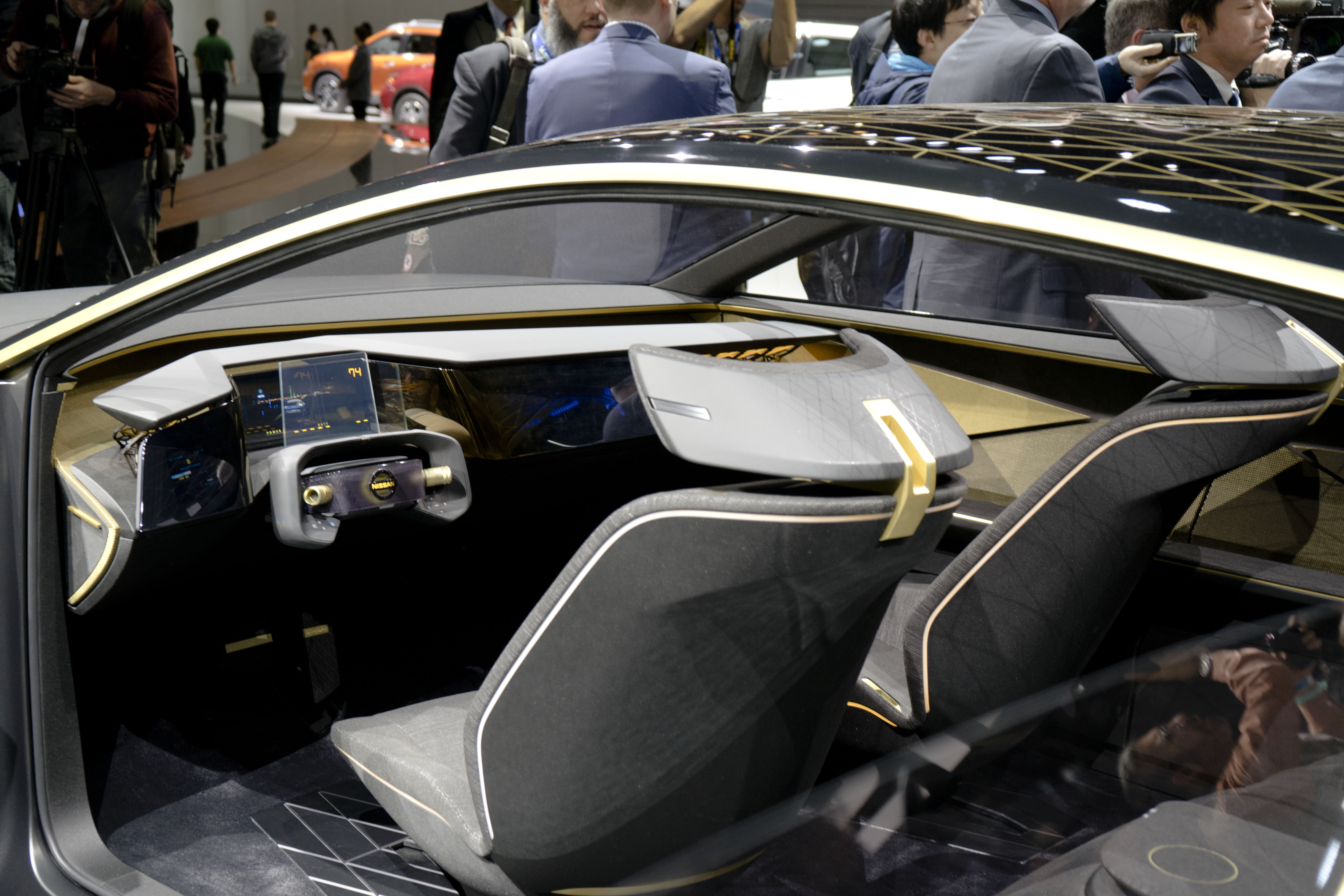 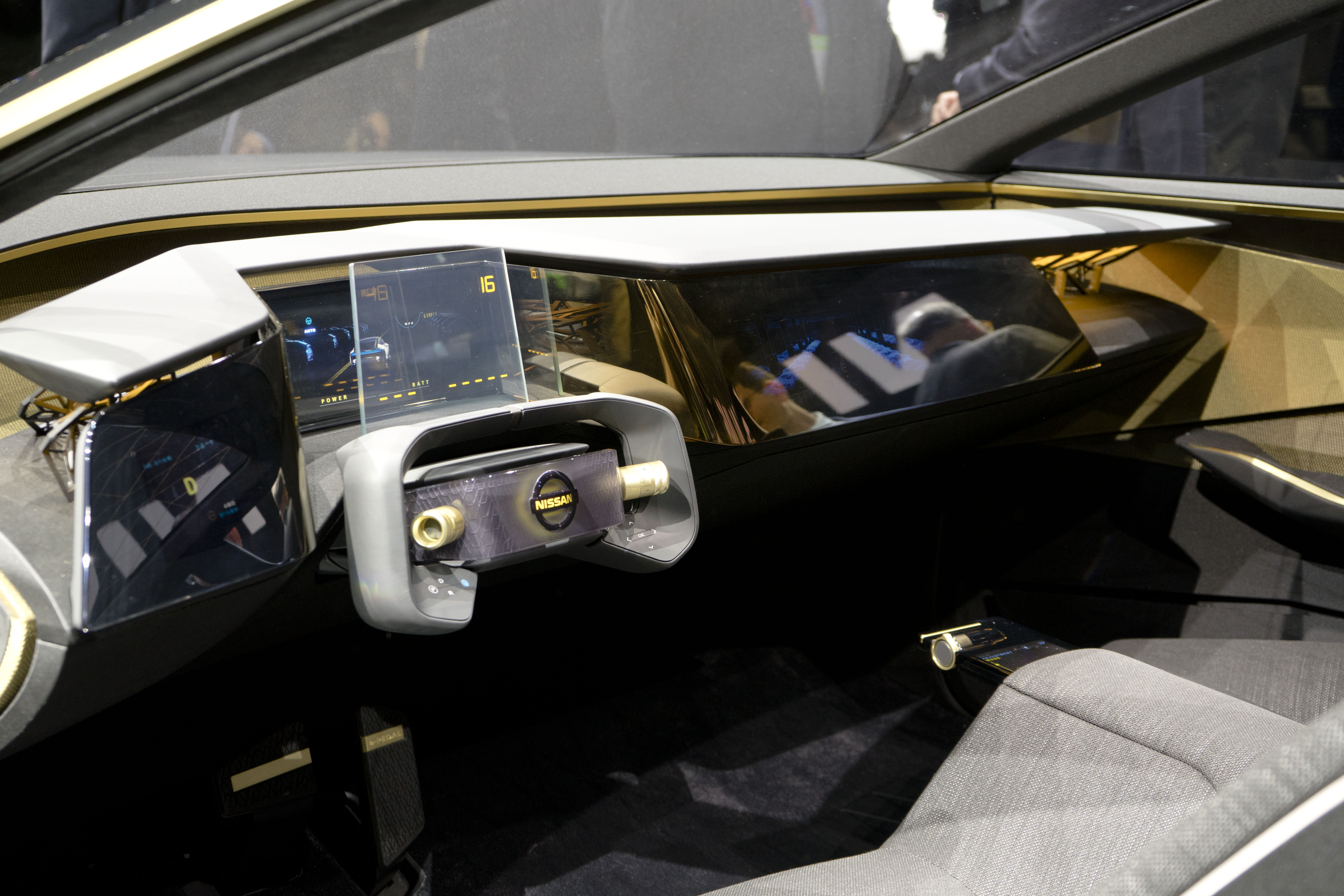 When the driver wants to take control again the steering wheel will extend back into position creating a driver-centric cockpit utilizing advanced driver-assistance technology.

Four compact screens have been tuned to follow natural eye movements and will only display the information that the driver requires at the time without overloading you with stuff like some of the current infotainment systems do today.

Interior sensors can also monitor the driver’s mood, posture, and facial expressions and can determine if the driver has suddenly lost the ability to remain in control. Available in both manual and autonomous modes, this system will bring the IMs to a controlled stop if the driver has been deemed incapacitated.

Since this is just a concept it offers but a glimpse into Nissan’s vision for an electrified and autonomous future and while we likely will not see a car like this come to life for quite a while expect to see many of the technologies and design features filter down into production models in the very near future. 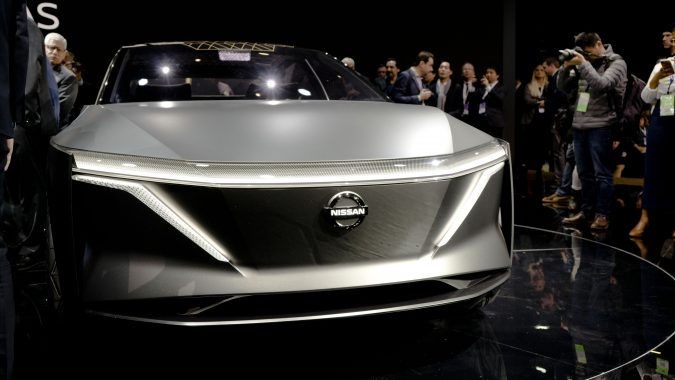 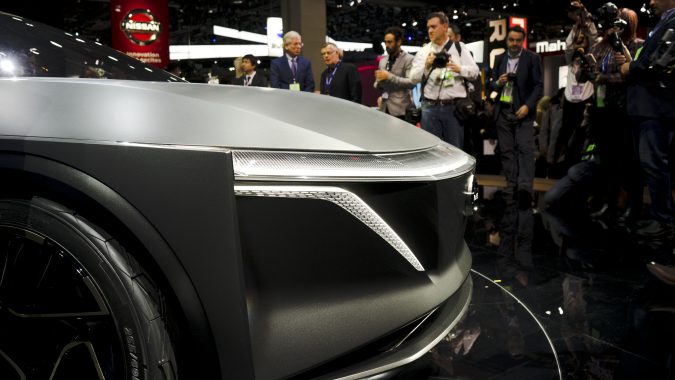 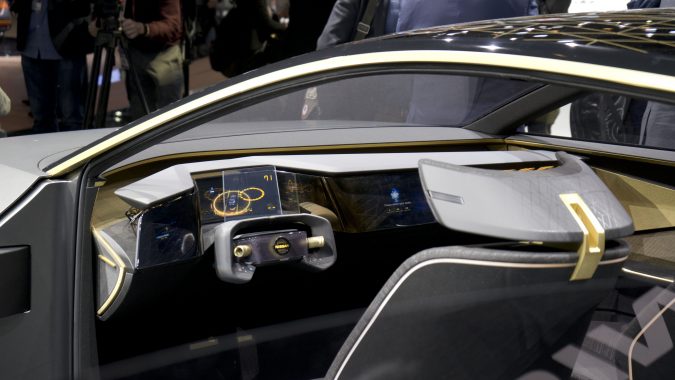 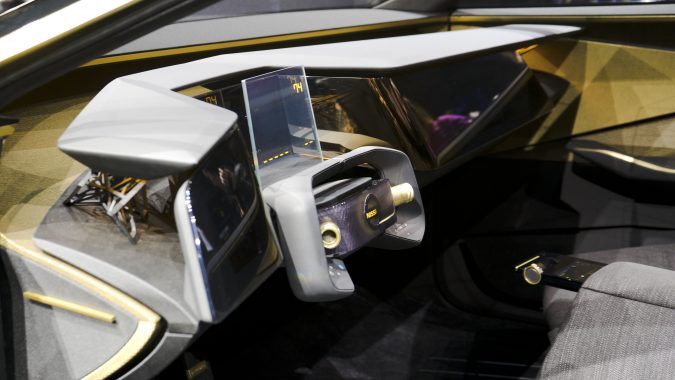 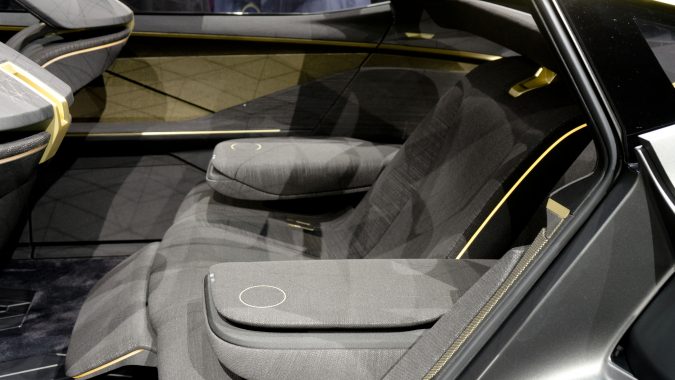 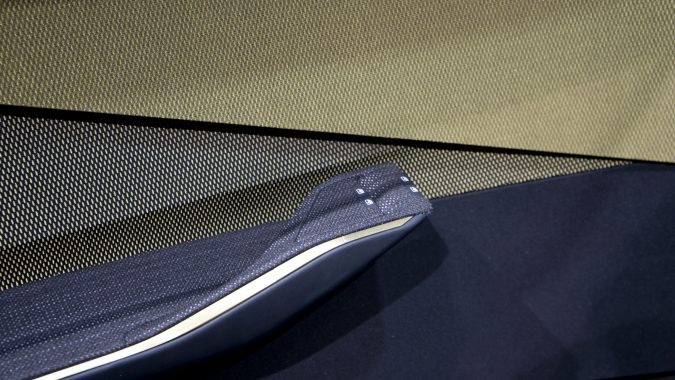 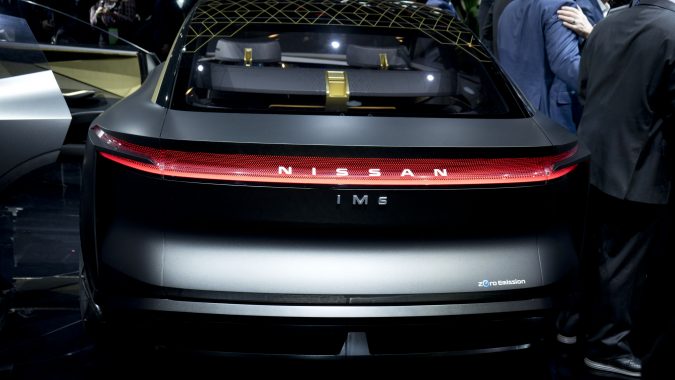