Arriving as a family unit to the now long gone Marvin Starr dealership on Eglinton Ave, we were there to look at a 1991 Buick LeSabre Limited that had recently been traded in off a three-year lease with less than 34,000 kms on the odometer.

The day my Dad purchased what would eventually be my first car is as vivid as if it were yesterday. Seemingly emerging from the womb as an avid automotive enthusiast, my thirteen-year-old self was bursting at the seams by the prerogative of playing a role, however small, in the process of finding a successor to my mother’s aging Oldsmobile Cutlass. In addition to growing tired of being burned by the seatbelt buckles in the summer, getting stabbed by the sharp vinyl seat trim and cleaning the foam off our clothes that would consistently fall from the decaying ceiling, its replacement would likely be the vehicle that I would learn to drive in.

Arriving as a family unit to the now long gone Marvin Starr dealership on Eglinton Ave., we were there to look at a 1991 Buick LeSabre Limited that had recently been traded in off a three-year lease with less than 34,000 kms on the odometer. It was immediately clear that this vehicle had been well taken care of. It offered a luxurious list of options that were still novelties at the time, like ABS, daytime running lights, climate control, velour interior and a nifty power antenna. After taking the vehicle for a short test drive, my Dad surprised all of us by making an uncharacteristically impulsive decision and buying the car right there on the spot.

Three long years later I successfully passed my written driver’s licence test during lunch hour on my sixteenth birthday and would incessantly bug my father to go driving. He started slowly by taking me to an industrial area that was vacant on weekends so I could safely gain experience without having to worry about other traffic. Eight months to the day after getting my G1, I successfully championed my G2 test in the trusty Buick, a day commemorated with perhaps the greatest mix cassette tape of all time in my opinion. Even after nearly two decades, there are still occasions that one of those memorable songs will come on the radio and I can’t help but smile, immediately being transported back to a time of wonder, whimsy and pure, unadulterated freedom.

Being the first car that I drove with any regularity, I didn’t have much knowledge to properly evaluate its pros and cons, I was just happy as a clam to be driving. As time went on and my automotive experience grew, I recognized the value of its smooth, supple ride and ample power delivery from the 3800 Series II V6. It may not have been as cool as the Camaros, Mustangs and Corvettes that other guys brought to school but it never left me stranded and always safely transported my friends to many other ‘first’ experiences; cottages, football games, the drive-in theatre, swim meets or skipping class to drive to Taco Bell. Proving myself to be (mostly) responsible and worthy of the responsibility, the LeSabre provided the transportation for first dates and was often the location of other pivotal life-changing moments that come with them. It also took me to my first job interview where I was lucky enough to be hired as a lifeguard and swimming instructor. While fellow employees and friends were stuck waiting patiently for the bus or relying on their parents for rides, I blissfully came and went as I damn well pleased.

The last thing I did before saying my final goodbye was rip the Buick tri-shield hood ornament from its home, which hangs on a chain from the rearview mirror of my current vehicle to this day.

As both the car and I aged, a newer Buick took its place in the driveway and I was provided ownership of the predecessor to take away to university with me. After traversing Waterloo by bicycle and foot for three years, grocery shopping in the winter with a car was downright indulgent. During one particularly cold winter spell, my roommates new, more modern Japanese and German vehicles wouldn’t start due to the severe temperature but the LeSabre eagerly fired right up on the first try. Continuing to baby it and never neglecting regular maintenance like oil or coolant changes, I upgraded the broken cassette tape deck with a CD player – another novelty at the time.

As time ticked on, frustrating anomalies became regular occurrences. The AC stopped working and the power window motors burned out, along with fuses and various other electronic accessories. While the bulletproof engine would have soldiered on for many more miles, everything else was unfortunately starting to disintegrate around it. Once I started making a regular salary at my first job, I decided that my money should go to monthly payments on a sportier and more reliable vehicle rather than costly repairs to the dark blue sedan. It could have had another life by providing transportation and memories for someone else, but unfortunately by that point the aftermarket CD player was the most valuable part of it. Not being able to endure seeing it sent to a junk yard or crushed, I opted to donate it to a highschool auto shop so that it could live on by providing education to students. 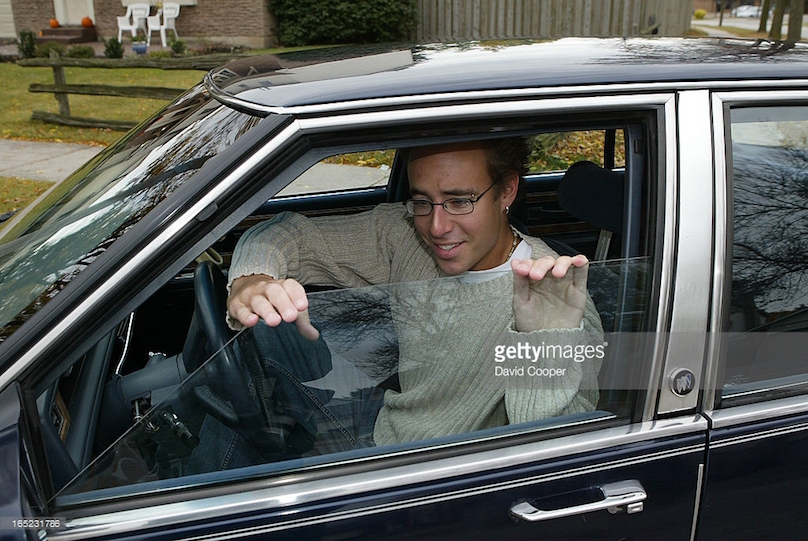 The last thing I did before saying my final goodbye was rip the Buick tri-shield hood ornament from its home, which hangs on a chain from the rearview mirror of my current vehicle to this day. Sometimes when I’m sitting at a stoplight or stuck in traffic, I will glance over and am transported back to those innocent days of ‘firsts’ that happen less frequently the older you get. And when I’m reminded of those adolescent memories of reckless abandon and wonder, I can’t help but smile.