Is it time for the rest of Canada to enforce a winter tire law?

As Canadians one of our favourite topics to discuss is weather, and in Canada we have a lot of it. Four distinct seasons, freak storms, drastic temperature changes, teeth chattering wind chills, it’s no wonder why it’s such a hot topic. We also have to live with this weather and drive in it, and this can be challenging to the best of us. Fortunately, advances in tire technology, especially winter tires have made driving through the cold months much safer. Quebec has even made winter tires mandatory in the province since 2008, and many believe this should be the case in the rest of the country. I’m an advocate for the benefits and safety of winter tires, not just for yourself but others on the road, which in my opinion is just as important.

Ok. I’ll get straight to the point. Winter tires, not “snow tires” as many might refer to them, are SAFER. The stats prove it, they help decrease severe and fatal accidents and accidents overall. Lives are saved, end of story! Not convinced yet?

The Quebec MTQ (Ministère des Transports) along with the government of Quebec enacted a mandatory winter tire law on September 18th, 2008. Basically from December 15th to April 15th the owners of a taxi or passenger vehicle registered in the province cannot operate their vehicles unless it is equipped with a full set of 4 winter tires. The province had previously gathered accident data and found that the 10% of people that didn’t use winter tires prior to the law were involved in 38% of most fatal and severe accidents. That was quite shocking to me in a province where 90 % of the drivers had already been using winter tires pre-law.   I guess it didn’t take them long to realize the necessity of this law. Just 1 year after this was enforced in the province a 5% net decrease in accident victims or 597 people were spared injury or worse.

Many European countries also have mandatory winter tire laws. Finland, Latvia and Germany are a few examples. All have seen substantial drops in fatal accidents.

Over the last 20+ years, winter tires have been extensively tested. Tire Rack, a massive tire retailer in the U.S built a mega testing facility where they pit all kinds of winter tires, summer tires and all-season tires against each other. Their rigorous and scientific approach to tire testing show just how superior the traction benefits are when a vehicle is properly equipped with winter tires. It’s there for all to see. 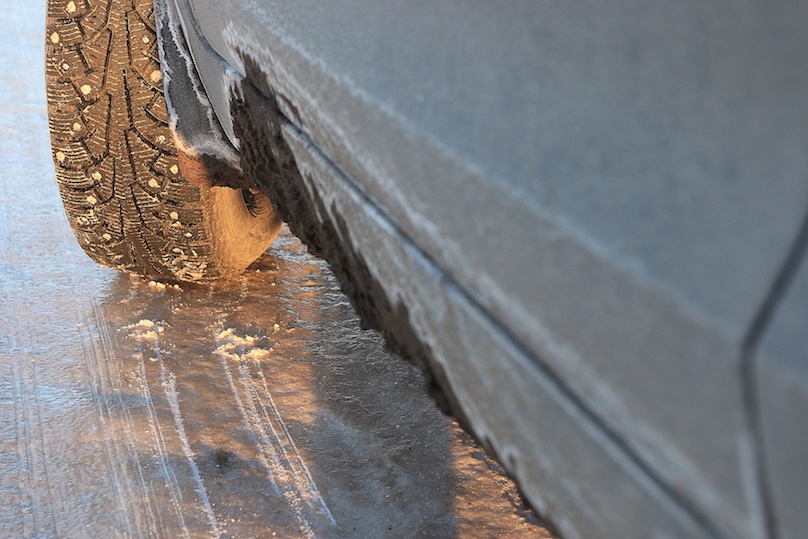 Consider that a properly equipped vehicle will stop 30% shorter in icy conditions, and can accelerate to a distance of 60m in 25% less time than it would with All-season tires. These numbers might not mean that much to you and I, but they are significant. Just a 5km/h increase in speed can generate an extra 14 tonnes of impact force upon crashing into a solid object.   This is considering that two identical cars have been used. 14 Tonnes is a lot and let’s face it, a 5 km speed differential isn’t that big of a deal when were just trundling along the highway.

In reality though, it can mean the difference between life and death. The fact that snow tires allow you to stop in a much shorter distance, should be justification enough to warrant their mandatory use in cold climates.

Should it be a Federal Law?

So should the rest of our great country follow Quebec’s example? I strongly believe so. Separation issues aside, the Quebecois seem to have gotten this one right. Let’s face it, we’re the 2nd coldest country on earth, and we have super short summers. If any country should mandate this, it’s us. The first time I used winter tires on my car, it was a night and day difference. I always thought I did “OK” when I was driving on all-seasons, but it was a slower, hairier ride and quite few more beads of sweat would form on my brow. Merely experiencing them is most of the battle in convincing more people to jump on this bandwagon. Once I switched I never looked back.

The majority of us think that we are all great drivers, capable of handling any situation thrown our way.   The truth is we have to put aside our driving skill ego’s and think of our roads as a community, where safety is everyone’s concern. We’re not all Mike Schumacher’s and Lewis Hamilton’s, and good luck telling some people that. Many of us also complain the cost is prohibitive and switching them over twice a year can be a pain, then there’s storage concerns, time wasted at shops, the sob story goes on.

The fact is though, prices of winter tires have gotten better over the years, and there are many more value brands out there than ever before. While all winter tires are not created equal, they must all bear the snowflake/mountain symbol and this will ensure they have been tested to handle most anything we would face during the cold months. I emphasize “cold” here because they are not just for ice and snow.

When the mercury drops below 7 C, regular tires will begin to lose traction because they don’t have the advanced rubber compounds that allow winter tires to remain flexible in sub-zero temps.   Another added benefit, is your summer or all-season tires will be stored for more than half the year. Some of that initial cost will be made up right there.

At the end of the day, deciding to use winter tires is still a personal choice for “most” Canadians, but with more cars and more drivers on our roads than ever before, should this still be the case? I sure don’t think so, but that’s my humble view.

RELATED: 7 Ways to Get Your Car Ready for Winter Weather