The small town of Gimli in Manitoba joins Areplog Sweden as the only other location in the world where AMG hosts its Winter Driving Academy.

Many people head down south this time of year.

The warm southern states or better yet Mexico offer refuge for escaping our cold and snowy winters.

And this year, Mother Nature decided that we haven’t been getting enough winter weather so she blessed us with more snow and more cold than usual.

So why then, during the coldest months of the year, did I find myself heading somewhere even colder?

If you thought the GTA was cold—it’s not. Gimli is an hour directly north of Winnipeg, the average temperature there in the day is around -20 C. It’s always windy and on the drive up from the airport, there was so much blowing snow we could barely see a foot in front of us.

The landscape was but an icy blur outside the windows, not really offering any glimpse of Winnipeg itself. It felt a bit uninviting

Why was I here again?

Acutally there’s a good—scratch that, Brilliant— reason to be here this time of year. Gimli happens to be where AMG set up their epic Winter Sporting Driving Academy.

Mercedes-AMG (AMG is just easier) is well renowned for their nutty V8’s and cannon-fire exhaust notes. They are Mercedes’ in house tuning and racing specialists and have been winning races with their engines for over 50 years. They bring Formula One tech to the street and it shows in their cars.

With a series of ovals, figure eights, circles and full courses carved right onto a frozen lake Winnipeg—the small town of Gimli joins Areplog Sweden as the only other location in the world where AMG hosts its Winter Driving Academy. 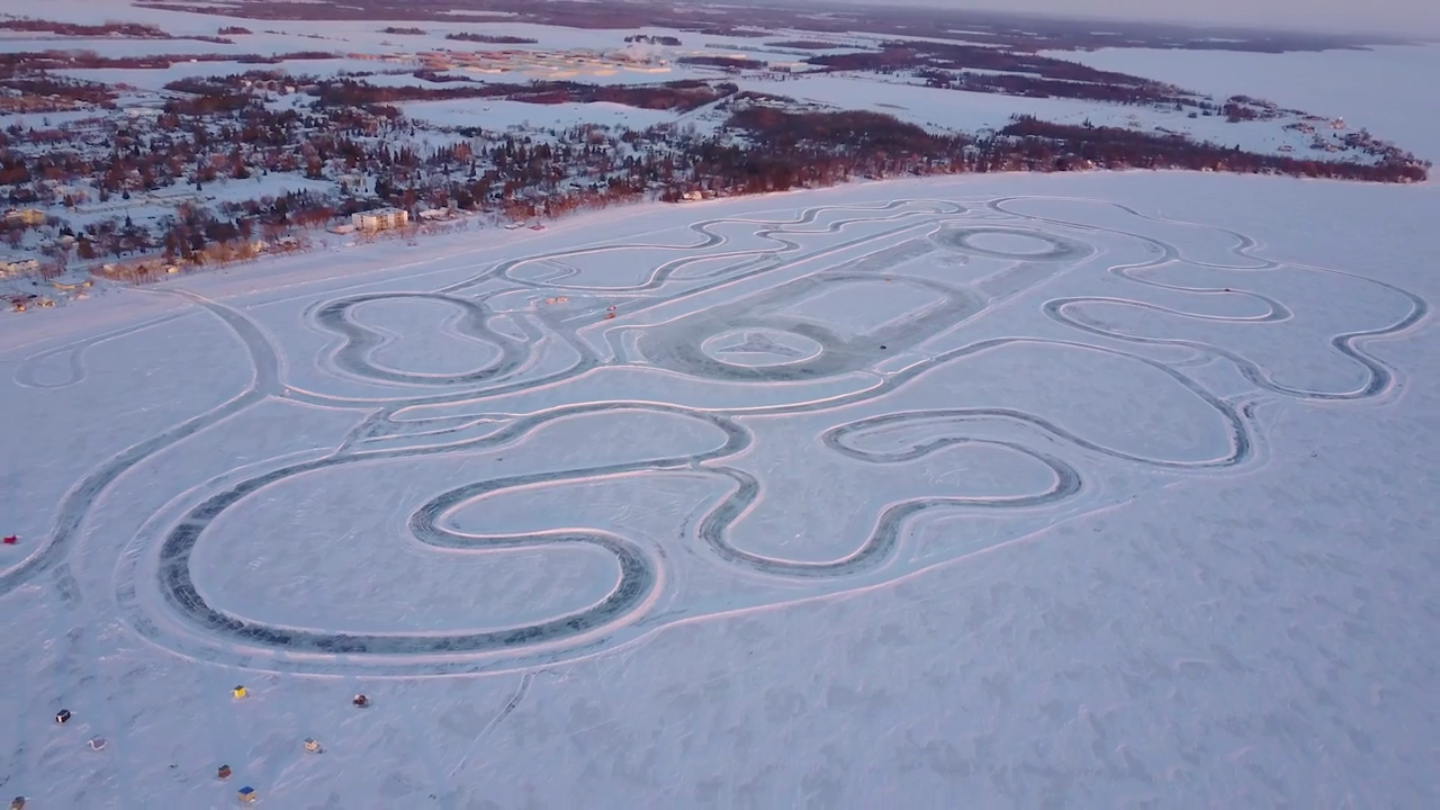 Lake Winnipeg itself is the 11th largest fresh water lake in the world and it’s relatively shallow average depth of 12 meters and bitter cold Gimli weather mean that this lake is frozen by early December. When we were there the ice was about 150 cm thick.

That’s enough to carry a Hercules Military aircraft with ease.

So we didn’t have to fear falling in then. Good news.

It’s all about safety

We hear this a lot. But the instructors at the AMG Driving Academy are serious about safety. Chief instructor Danny Kok was clear about this from the start. “I’ve seen 30,000 people through this program and everyone has left in one piece and with a smile on their face.”

The instructions we got were from actual racing drivers. Danny already an accomplished driver is about to reenter again in a GT4 Class AMG GT.

They demonstrated the basics of car control, understeer, oversteer and the different ways to initiate a drift. Not a difficult task in cars with as much power as we were about to use here. Also the ice. We had radios in the cars and were always in constant communication. We were thankfully briefed on what to do when we crashed—which we would. A lot.

The point of Winter Sporting was to master the Drift, which is basically moving or sliding sideways through a corner. Everybody wants to drift. It’s not the fastest way around a corner—sure. But it’s definitely the most fun. And on ice when the friction coefficient is effectively zero, there’s gonna be crashes.

Good thing then that the speeds are so low, and the track is surrounded by soft forgiving snow banks. Did I also mention that Danny has never had any safety related issues?

Actually those crashes end up teaching you what you did wrong and the most important thing I learned on the ice was to brake.

That’s right, braking—on ice. These cars of which I will get into in a bit were outfitted with hand studded winter tires that would be illegal just about everywhere except on the ice at Gimli.

These tires made only in Sweden(where else) by a husband and wife team are what allow you to brake on ice. They are amazing. If we had these in Toronto no one would crash. Ok that’s not true.

If you’re curious, the tires are called Lappi. They are very expensive, but there are around 400 2mm studs on them each glued in by hand. So they should be.

You need this kind of grip to negotiate the beautifully carved ice tracks on the lake.

The largest course here aptly named the “White Hell” is one of the largest race tracks in North America at just under 8km.

It was a frozen drifting wonderland.

The group I was with shared my enthusiasm in knowing we were allowed to slide these very expensive cars with upwards of 600hp to our hearts content—without getting in trouble.

We rotated between a Mercedes-AMG CLA 45, an AMG C63 S and an AMG E63 S. The CLA offered a front biased AWD, the C63 is a hairy chested rear driver and the E63, with all its 603 horses and earth moving 627lb-ft of torque, had rear biased AWD.

All incredible in their own right the CLA was the easiest to master the C63 was all over the place being less forgiving than the others, and the E63 was an animal, a very friendly animal though and easily my favourite of the three.

Once mastered it was a peach on the ice.

The Art of the (controlled) Slide

And I’m not calling myself a master by any means but I learned some great skills here, things that I’ve attempted in parking lots but never been able to do in a setting like this. It’s not the same, trust me.

One of the instructors there, Reinhold Regner, who also happens to be the chief global instructor for the Mercedes Driving Academy sat with me for a few of my last laps of the White Hell. I was in the E63 and he watched as I ham fisted it through the first few corners and like the pro that he was, he quickly pointed my mistakes.

Apparently I wasn’t lifting enough through the corners, and was too slow to counter steer when powering away on the exits. It took me a few tries but armed with this valuable advice I soon had it down pat.

The slides came much more naturally through the corners as I learned to trust exactly what the car was going to do. To drift through a corner in complete control is an exhilarating feeling and very rewarding when you get it right.

It wasn’t the last time I crashed but when I did, I was much more graceful.

And all those crashes were part of the fun. There was always a sinister black G550 nicknamed “the Vulture” looming about ready to yank you out should you find yourself inserted a bit too deeply in one of the banks. Every time you got yanked out by the vulture he would punch a hole in your name tag. The one with the most holes at the end had to walk home.

The AMG Winter Sporting Academy in Gimli is either a 2 or 3-day program with accommodations at the Lakeview resort right by the ice tracks, and it’s available to anyone.

There is a Gimli Glider Museum in the resort that is well worth checking out. This museum commemorates a near disaster that shaped the future of aviation and is rooted in the town’s history. There was even a great Mayday episode on TV some years back that dramatized this event.

I might not have gone south in February but the experience out on beautiful frozen lake Winnipeg was truly like nothing else on this earth. And for a car guy like me going north in the winter was definitely the right choice.

More info on the AMG Driving Academy can be found here. 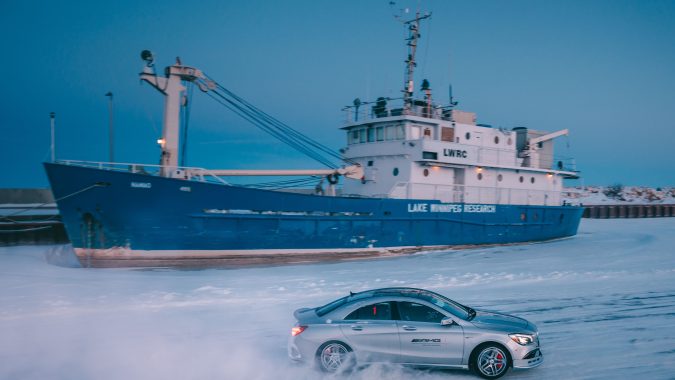 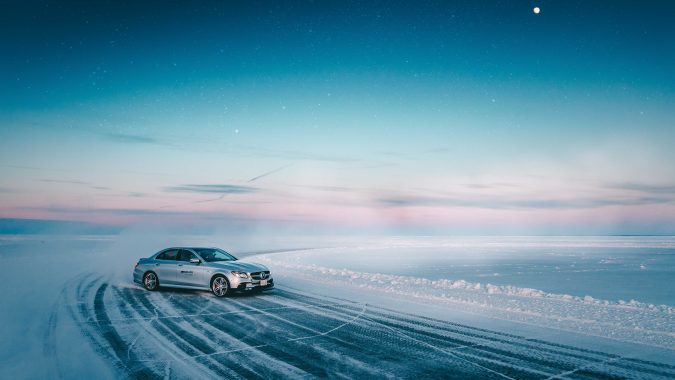 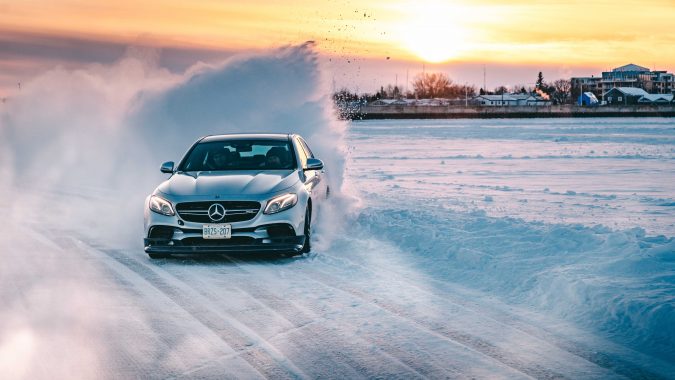 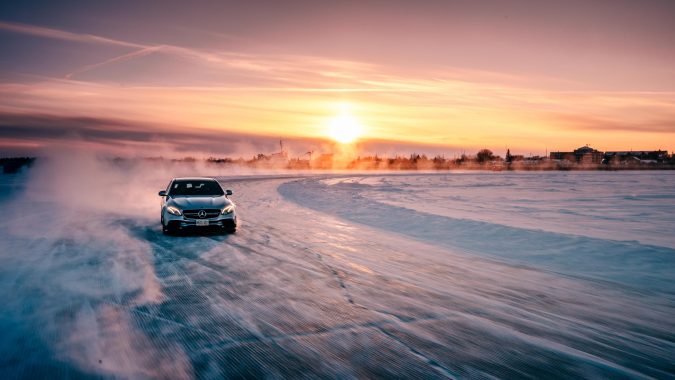 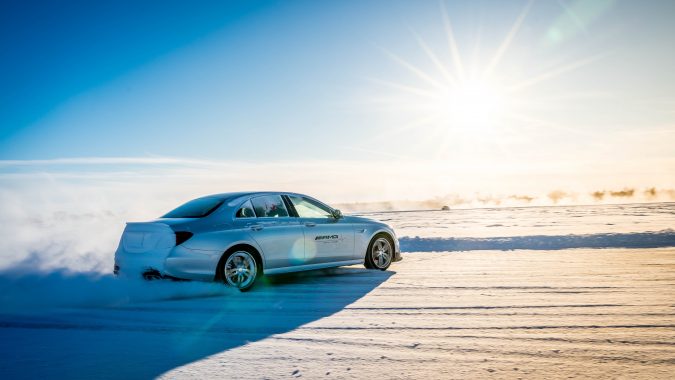 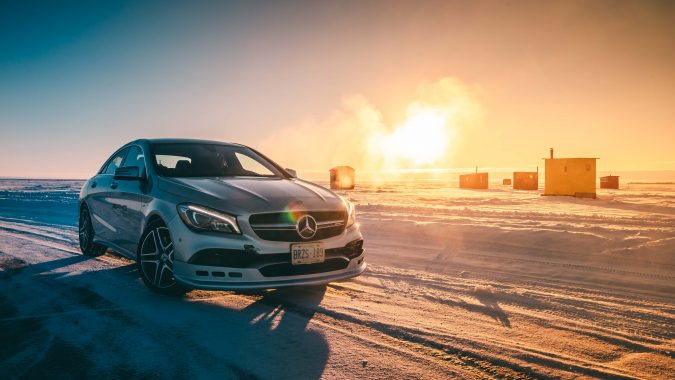 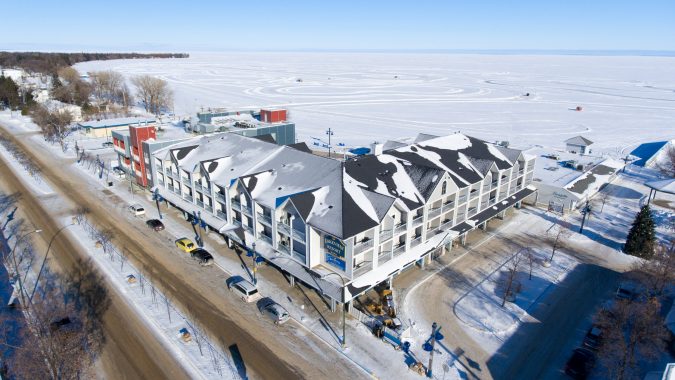 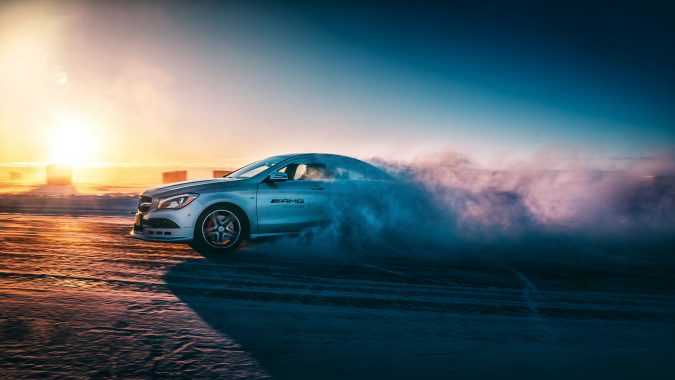