PARIS – Perhaps the most important launch at the Paris Motor Show was the world premiere of the 2017 Kia Rio compact.

Rio is the keystone to the Kia lineup with more than 473,000 sold around the world in 2015, accounting for 16 per cent of brand’s annual sales.

Exterior and interior styling were done by Kia’s design centres in California and Germany centering on straight lines and smooth surfaces for a more substantial look.

Interior volumes have all been increased, such as the trunk that is now 325 litres.

A new three-cylinder turbo 1.0-litre gasoline engine featuring direct injection will power it. Kia says, that with the lighter engine, handling will be improved.

It will also be the most technologically advanced Rio ever, with leading edge connectivity and safety aids including Apple CarPlay and Android Auto integration.

Rio will also be the first in its class to offer Autonomous Emergency Braking and pedestrian recognition.

At the show, Kia also announced a more powerful SX version of the Soul with 200 hp.

On the Hyundai stand, the high performance “N” models and the all-new RN30 Concept were shown.

Based on the i30 model known as the Accent in Canada, the RN30 is a no-nonsense racecar developed by Hyundai Motorsport (HMSG), Hyundai Motor Europe Technical Centre (HMETC) and Hyundai Motor’s Performance Development & High Performance Vehicle division.

The engine is based on Hyundai’s 2.0-litre four-cylinder, but power is vastly increased to 375 hp and it features all-wheel-drive and an electronic limited slip differential.

RN30 also includes rev matching and its Electronic Variable Exhaust adds what Hyundai describes as, “a surge of aural pleasure by emitting a strong exhaust sound consistent with the visceral sensations produced by the rapid acceleration.”

Introduced in April at this year’s New York Auto Show, the Genesis New York Concept was also on display in Paris.

Long and low, it sets the tone for the new Genesis “Athletic Elegance” design language and is powered by a 2.0-litre twin scroll gasoline direct injection engine with 240 hp.

Hyundai says the design team took their inspiration from, “modern luxury lifestyles and products, plus the early success and progression of the Genesis brand.” 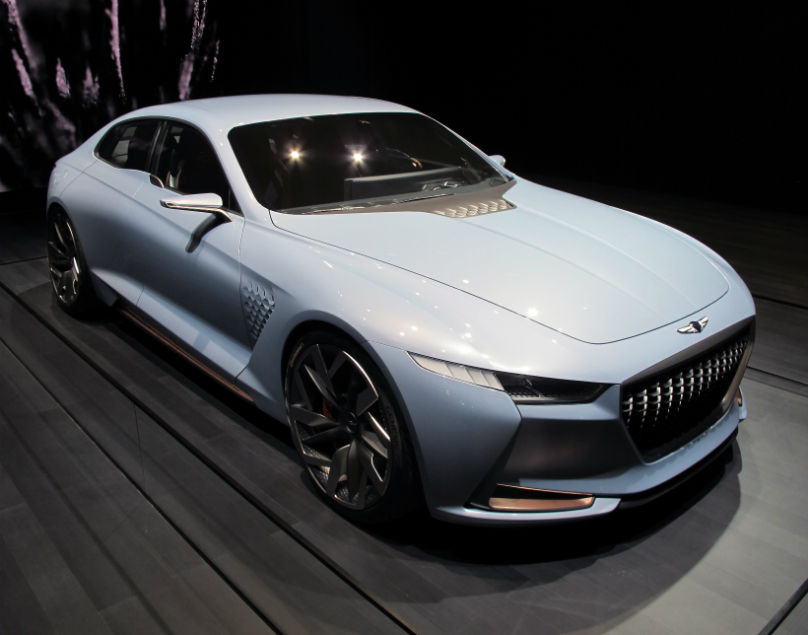