Joann has the unique distinction of being the wife of the late great Gilles Villeneuve and the mother of Jacques and Melanie Villeneuve.

CANADIAN Tire Motorsport Park, previously and still affectionately known as Mosport Park, is located just north-east of Bowmanville Ontario and was the venue this weekend for the Mobil 1 SportsCar Grand Prix, the only Canadian stop for this popular sports car racing series.

It featured the IMSA WeatherTech SportsCar Championship which is made up of exotic prototype race cars as well as more familiar looking GT cars from manufacturers including Audi, BMW, Chevrolet, Ferrari, Ford, Honda, Mazda and Porsche.

Our goal this weekend was to reintroduce Joann Villeneuve to a race track that she hadn’t seen in almost four decades. Joann has the unique distinction of being the wife of the late great Gilles Villeneuve and the mother of Jacques and Melanie Villeneuve.

Our goal this weekend was to reintroduce Joann Villeneuve to a race track that she hadn’t seen in almost four decades. 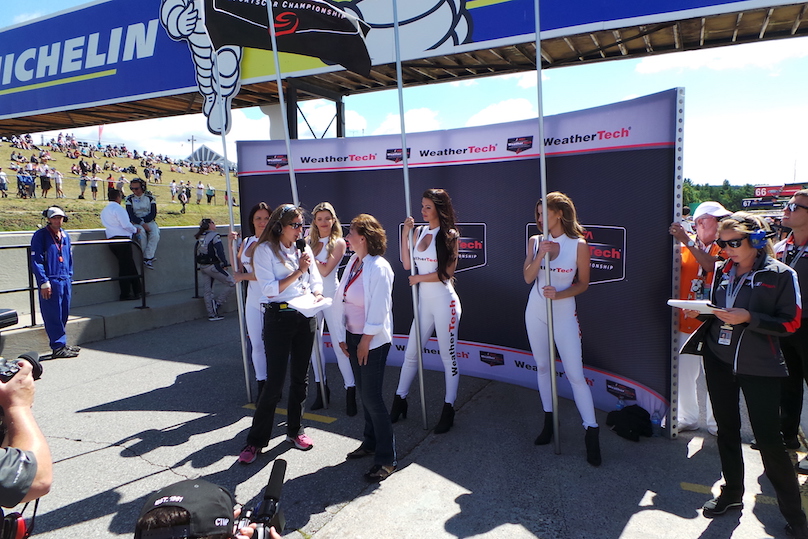 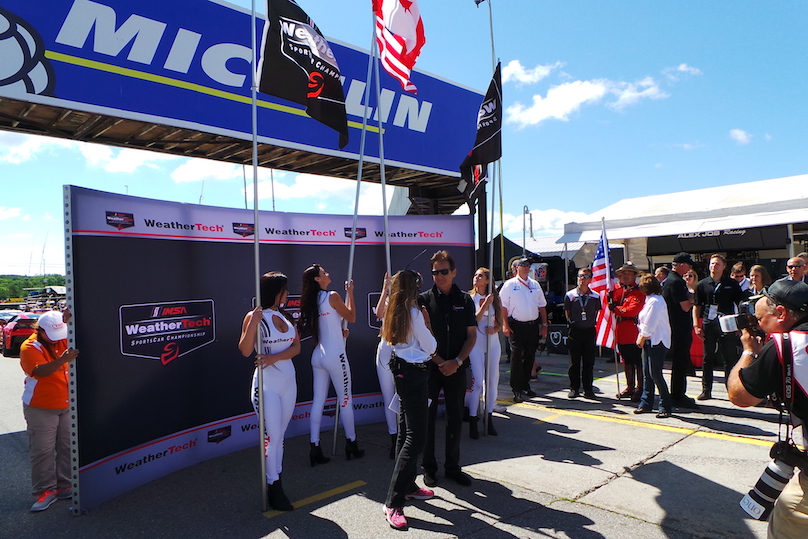 For those not familiar with the family, Gilles Villeneuve is one of this country’s most revered and idolized racing car drivers. Gilles raced in Formula 1 for Ferrari (except for one race with McLaren) from 1977 until his untimely tragic death on May 8, 1982 after an accident during qualifying for the Belgian Grand Prix. He was just 32 years old.

Jacques Villeneuve is the only Canadian driver to have won the coveted Formula 1 drivers’ championship (1997), something his father was never able to achieve. He is also the only Canadian to have won the Indianapolis 500 (1995). Jacques is only one of three drivers in the world to have won the Formula 1 title, IndyCar title and Indy 500 (only Mario Andretti and Emerson Fittipaldi accomplished that achievement). Melanie Villeneuve is not a race car driver, but she spent her childhood in the pits with her parents and brother and is very familiar to everyone who followed Gilles Villeneuve’s Formula 1 career.

ALSO READ: Latifi has eyes on Formula One

CTMP has gone through its biggest transformation in its 55 year history (the first race took place there in June 1961). The track was purchased by Canadian Motorsport Ventures, a group made up of Carlo Fidani, Al Boughton and Canadian Motorsport Hall of Fame inductee Ron Fellows on June 1st 2011. Millions and millions (and millions and millions) of dollars have been spent on upgrading all aspects of the facility with incredible results, which really have to be seen to be appreciated. It is now a world-class race facility underlined by the fact that the highest echelons of international motorsport racing come back year after year including the IMSA WeatherTech SportsCar Championship, Continental Tire SportsCar Challenge, Pirelli World Challenge and the NASCAR Camping World Truck Series. Top Canadian series also compete there including the NASCAR Pinty’s Series, Canadian Touring Car Championship and the MOPAR Canadian Superbike Championship.

ALSO READ: Racing Roundup: Christian Horner should be demoted too

Joann’s first impression of the transformed facility was that “They renovated and improved the track superbly but kept the heart of Mosport intact”. Ron Fellows and Carlo Fidani speak proudly of the fact that the actual race track has not been altered. It has been widened in places, some of the corner runoffs have been paved, but as Ron said “you enter each corner, clip the apex and exit the corner the same way it has always been done, we haven’t altered that”.

Joann was invited to be the Grand Marshall and at just before 11:00am on Sunday morning she uttered the most famous words in motorsport racing – “drivers, start your engines!”.

On Sunday morning she uttered the most famous words in motorsport racing – “drivers, start your engines!” 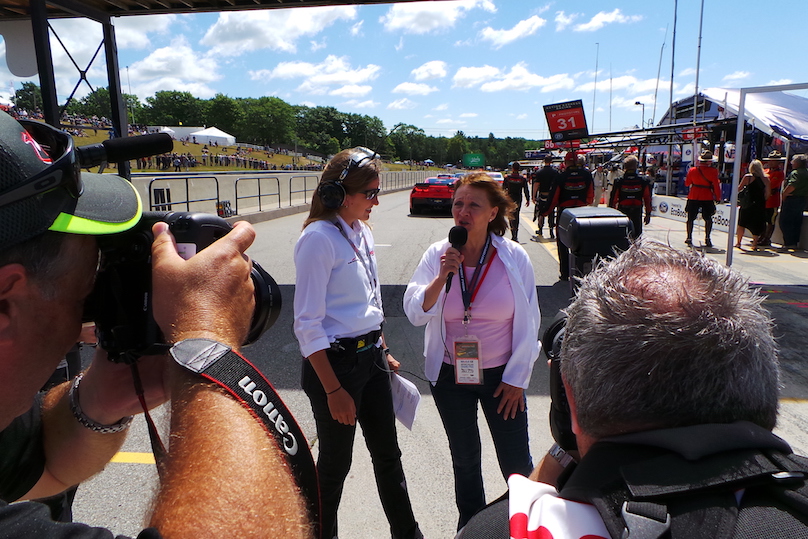 During our two days at the track we were able to enjoy the hospitality of Ron and Lynda Fellows, Carlo Fidani and Myles Brandt, the President & General Manager of CTMP, in the beautiful two-story hospitality and event facility that is so large it can handle groups of up to 500 people. 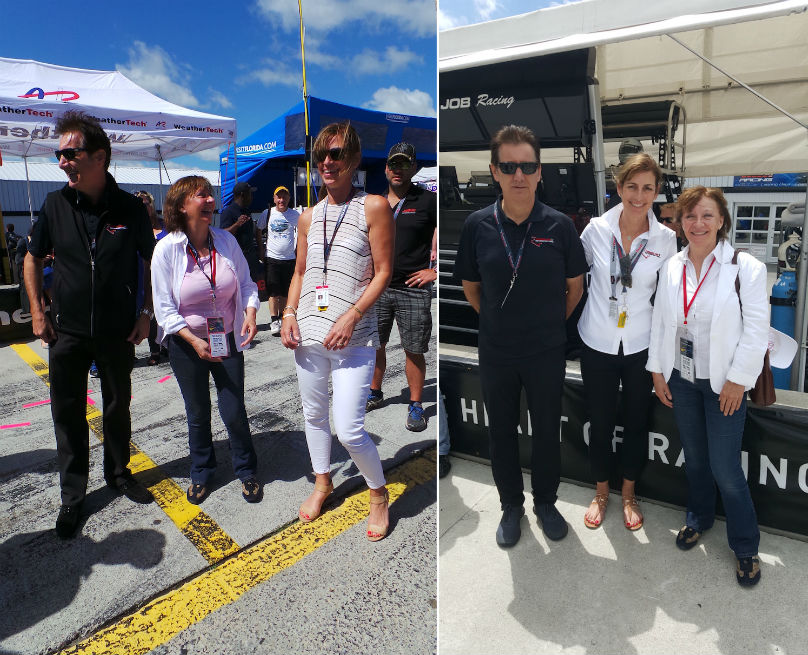 We were also able to view the track from turns 1, 2, 3, 4 and 5 (for those familiar with the track, turns 5a and 5b or Moss corner named after Sir Stirling Moss). As you leave the pits and paddock area and head out around the track you are taken aback by the number of tents, campers, trailers and the great family atmosphere around the track. 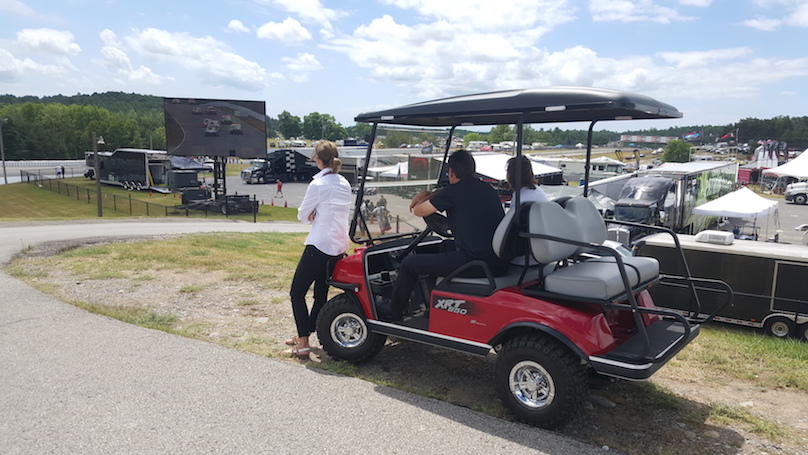 “You don’t just go to the race you go to experience the whole event” Joann said. “Seeing the campers brought back so many good memories of our days in Formula Atlantic”.

Following one of the support races on Sunday afternoon, Joann also had the unique opportunity of awarding the 3rd place trophy to Xavier Coupal, her late husband’s cousin’s son who is following in Gilles’ footsteps and leading the Nissan Micra Cup driver’s championship. Joann presented the trophies to the top three drivers in that series and it was particularly special for Olivier Bédard, who was the winner of the Gilles-Villeneuve Award last year following his championship title. 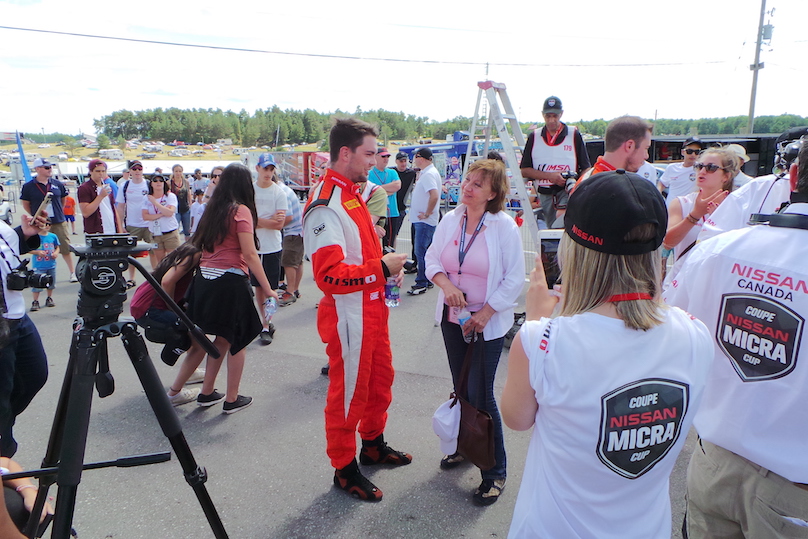 Joann was thrilled to meet some of the other Canadian drivers who raced over the weekend including Canadian Motorsport Hall of Fame inductee Scott Maxwell who won Saturday’s Continental Tire SportsCar Challenge race in the Ford Mustang Shelby GT350R-C which is built by Markham Ontario-based Multimatic Motorsports.

Overall, Joann said the weekend exceeded her expectations in every way. Job well done everyone.