New York, NY: NYC traffic is not for the faint of heart. Cars, trucks, busses, yellow cabs and pedestrians jockey for space on the narrow streets.

It can seem like an unmoving writhing mass that you will never escape, but eventually you do end up at your destination—sometimes by sheer luck. This city was not really designed with the car in mind and it is apparent.

But NYC is one of the most innovative and forward-thinking cities in the U.S. It is a cultural hub and one of the most visited places in the world. Maybe that’s why GMC chose New York, as the location to unveil its new Sierra AT4 just ahead of the New York Auto Show.

Earlier last month we reported on the industry’s first CarbonPro box that featured a full carbon-fibre pick up bed. This bed replaces the traditional steel and aluminum used in most trucks today. Not only does it save 62 lbs, but it offers best-in-class corrosion, scratch and dent resistance. It is likely the strongest bed in the business and until someone decides to repeatedly throw heavy toolboxes or anvils in the back it should stand up to that claim.

Carbon fibre is already one of the strongest materials we have. Depending on its composition it can be up to 10 times stronger and 5 times lighter than steel. Its benefits are no secret and have been used in so many automotive applications that it’s almost on the verge of ubiquity.

It’s still an expensive material to produce and GMC will offer their carbon bed as an option on the 2019 Sierra when it goes on sale in the fall.

GMC has enjoyed tremendous success in the premium truck and SUV market with their Denali line that was first introduced in 1999 on the Yukon and is now offered on every model in their portfolio.

“Last year we sold our one-millionth Denali. Today Denali sells more than 140,000 units at retail here in the U.S, almost a third of our total volume. In fact Denali now out sells the whole products lines of many luxury brands including Lincoln, Infiniti and the combined sales of Land Rover and Jaguar. Most important, Denali’s average transaction prices exceeded leading luxury brands including Mercedes and BMW,” said Alan Batey, Executive VP and President North America.

“As we’ve continued to push the premium truck space to new heights, we’ve learned that many of these customers want to take their adventures off-road and they’d like a premium vehicle to take them there.”

Hot on the heels of this success GMC unveiled the Sierra AT4, an off-road ready version of the newly redesigned pick up truck.

Duncan Aldred VP of Global Buick/GMC introduced the car to the media stating, “It is designed for customers who want a bold presence on the road and the capability to venture of life’s beaten path. Capitalizing on GMC’s unique combination of bold design and precise craftsmanship, AT4 moves GMC to the currently unconquered space of premium off road capable vehicles.”

The Sierra AT4 is distinguished by glossy black trim on the windows, mirror caps and the grill surround. There are new body coloured bumpers and two vertical recovery hooks in the front that look like Nosferatu’s fangs after a feeding. 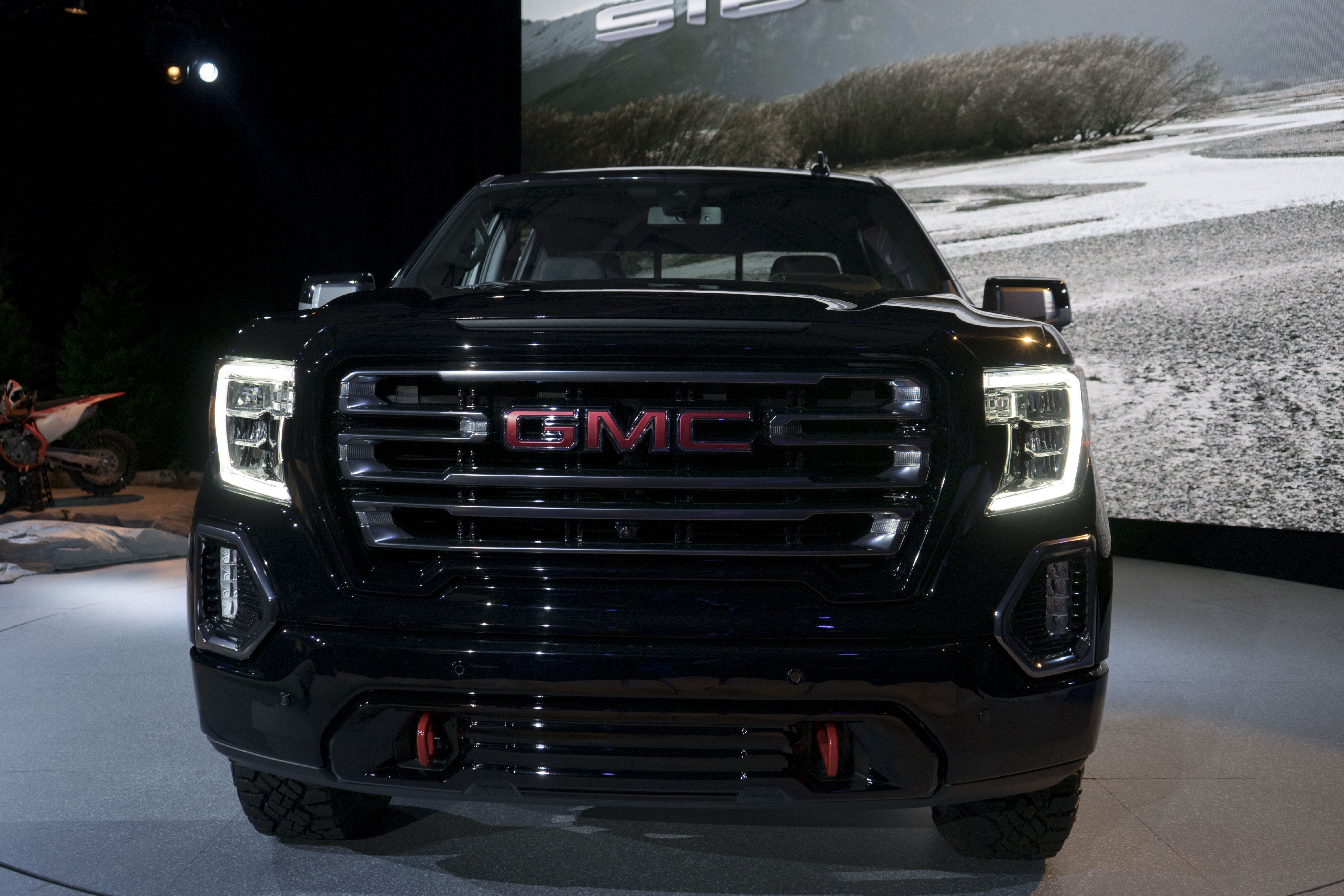 The overall effect is subtle and you have to look hard to spot the major differences. The AT4 badging on the doors and tailgate do give it away though.

Not as subtle is the 2-inch factory suspension lift using off-road tuned rancho monotube dampers, that not only give the Sierra an added dose of presence but increase its ground clearance and give it much improved approach and departure angles. A 2-speed transfer case with a low range for extremely tough terrain, skid plates, and 4WD round out the standard equipment.

The AT4 also comes with Hill Descent Control and coupled with the locking rear differential it can negotiate steep descents without breaking a sweat. There is even an inclinometer to tell you how steep the grade you are on actually is.

I’m not so sure about the world of premium off-road vehicles being unconquered. The one product that comes immediately to mind is the Ford Raptor; a vehicle that offers all the off-road capability that one would need and then some. I actually had the pleasure of taking a Raptor off-road and it laughed at everything I threw in its way.

In my opinion it’s also just as premium as it comes with a multitude of creature comforts and conveniences that wouldn’t be out of place in a luxury automobile of Teutonic disposition.

One of the most innovative features on the new Sierra has to be its MultiPro tailgate that combines 6 different functions in one. The tailgate is basically bisected in two pieces and can be opened electronically with the key fob or via a button on the tailgate itself.

This allows you to: load longer objects; create a second tier for loading items; act as a workspace; turn into a full-sized step that can hold up to 375lbs and makes loading equipment like dirt bikes and ATVs a cinch. 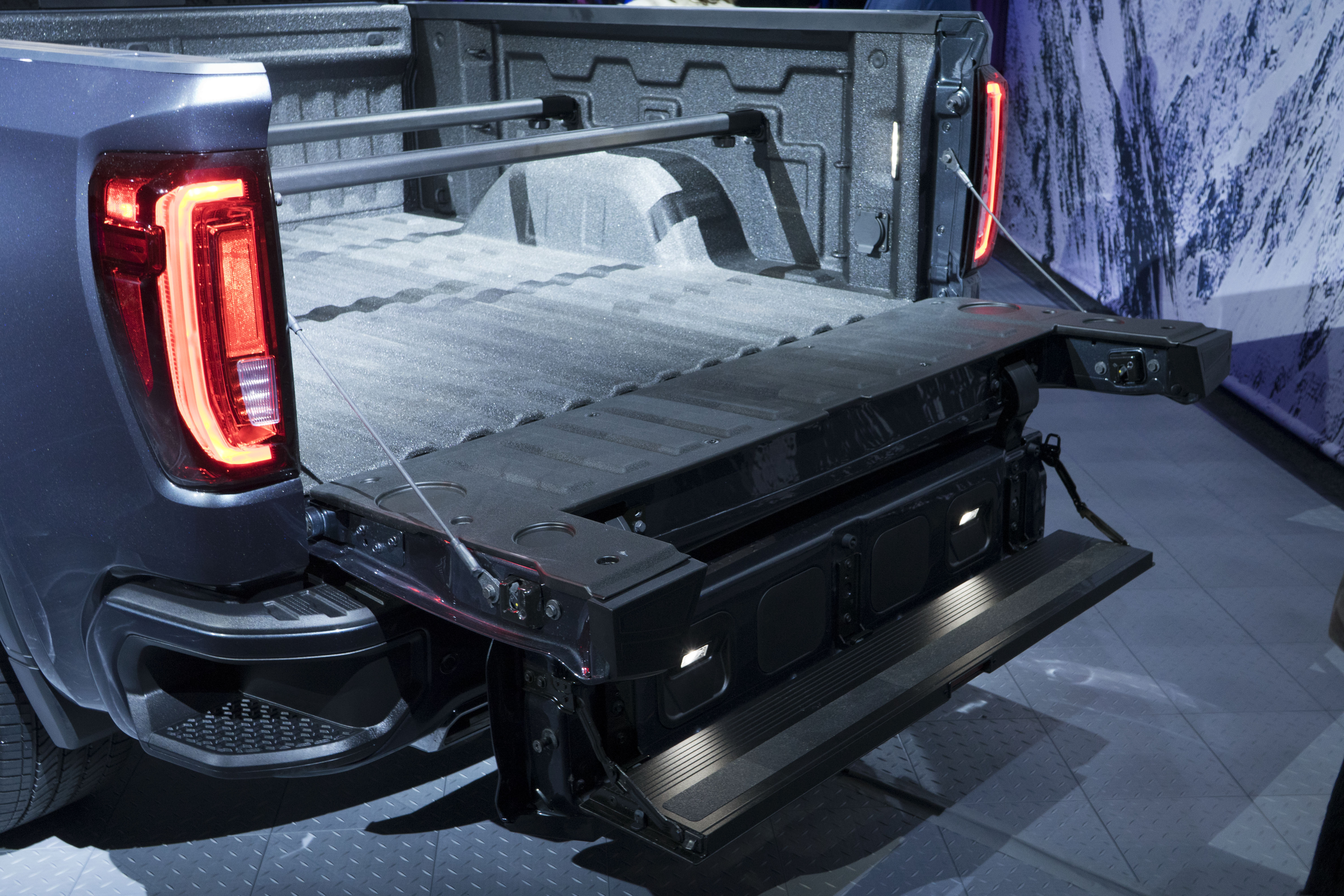 Both the 6.2 and 5.3 litre V8 have been redesigned and Sierra can now be specified with an all-new 3 litre straight six diesel. The 6.2 and diesel will be paired with a new 10-speed automatic.

Both V8s feature Dynamic Fuel Management and can operate on as little as 1 cylinder under light loads.

Power and torque figures have not been specified at the time of this writing but we will report on them as we get the information.

This new Sierra AT4 is just the beginning as GMC will roll out AT4 versions of all its products within 2 years.

The new 2019 GMC Sierra and Sierra AT4 will arrive on dealer lots later this year. 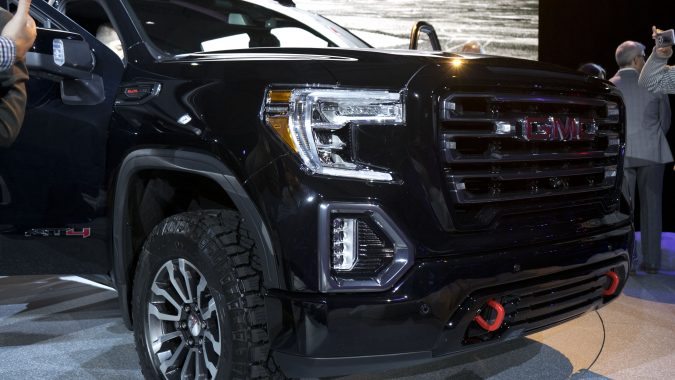 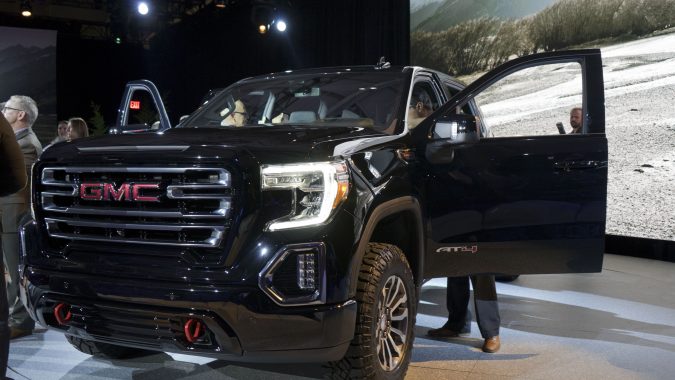 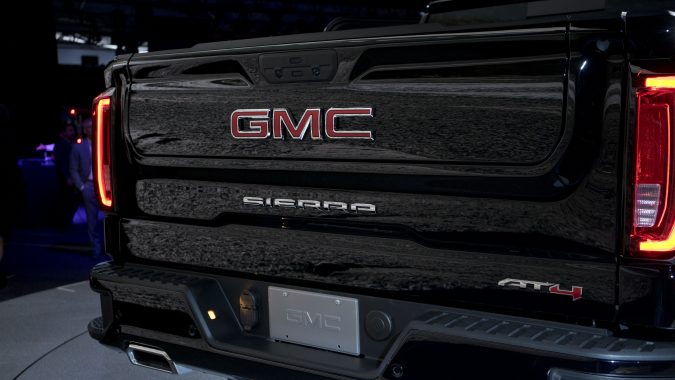 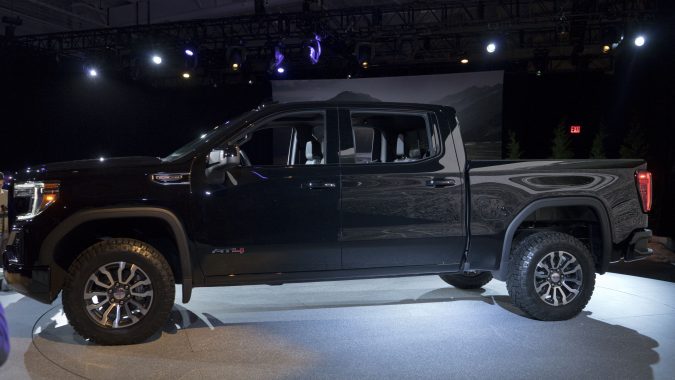 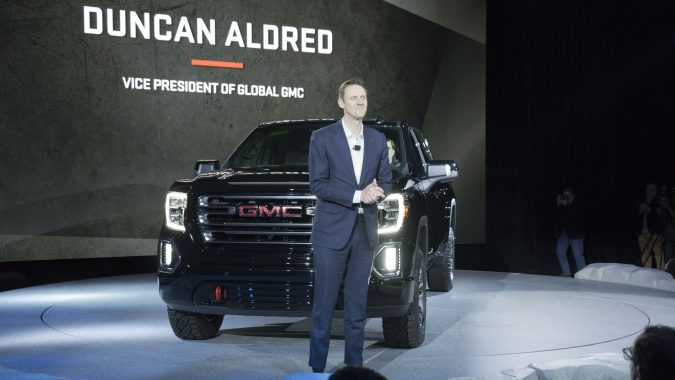 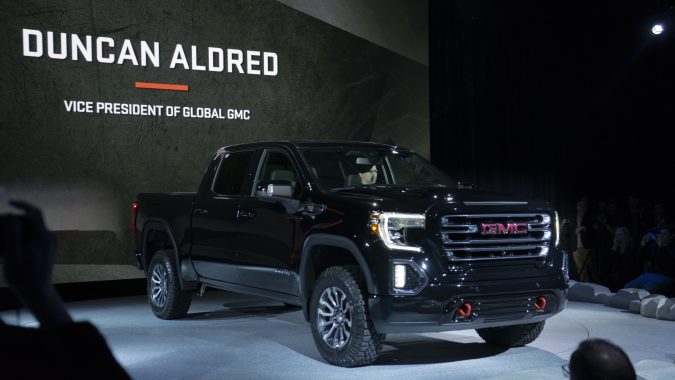 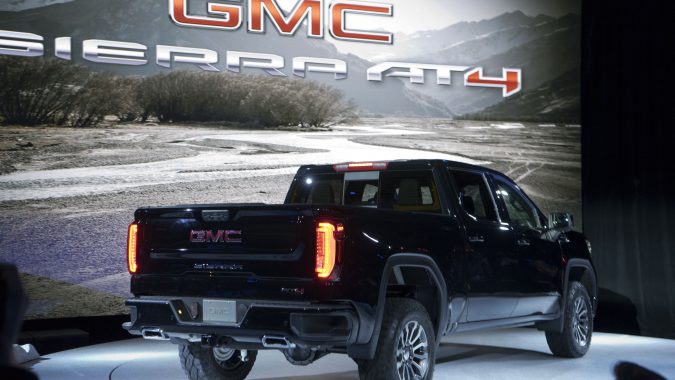 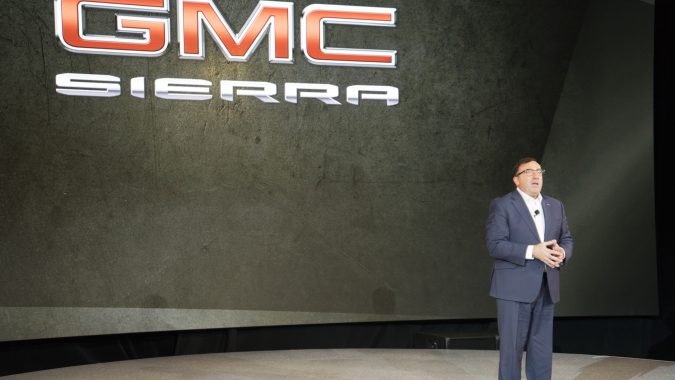 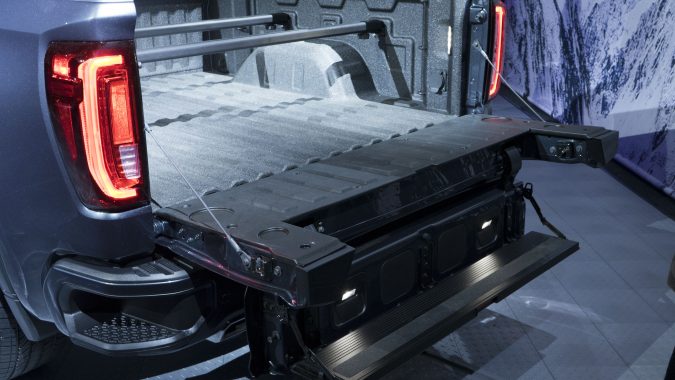 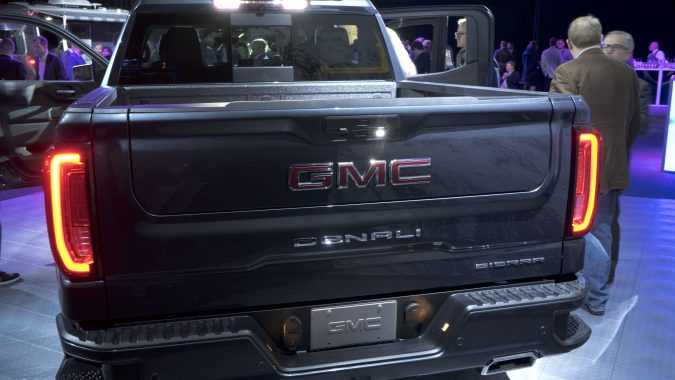 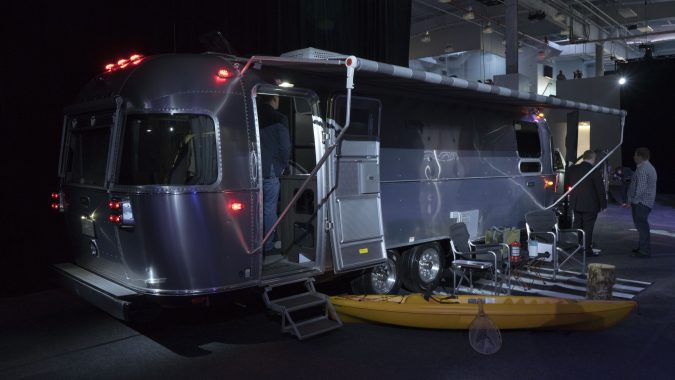 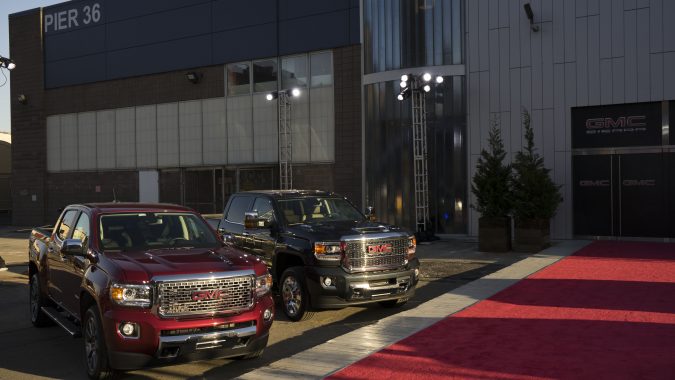 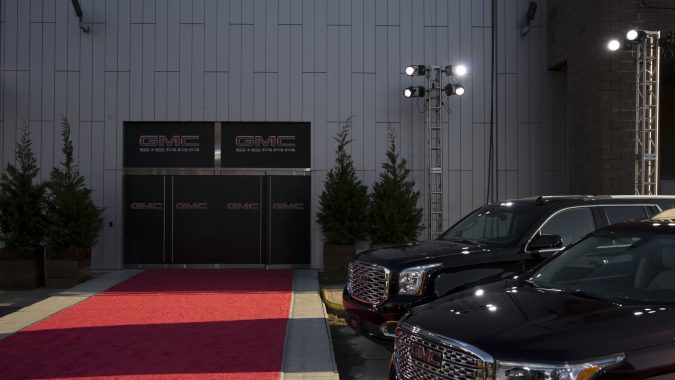 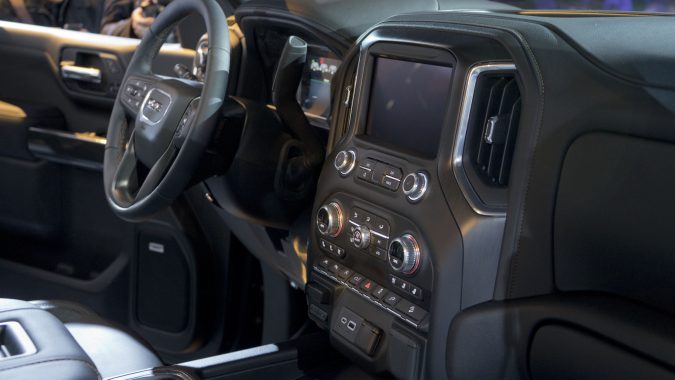 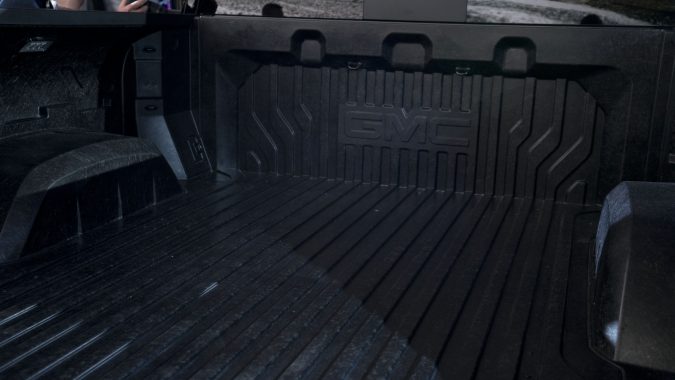