Ever wonder what’s in the fuel that powers those high performance Formula One racecars?

MONTREAL: Ever wonder what’s in the fuel that powers those high performance Formula One racecars?

Well, as it turns out, it’s not that much different than what we use in our daily drivers, according to Ian Albiston, Shell’s Formula One Trackside Lab Delivery Manager.

During an interview in the week leading up to the Canadian Grand Prix in Montreal, Albiston said, “99 per cent of the compounds found in racing fuel are the same as in (Shell’s) V-Power NiTRO+ fuel you put in your car.”

Thanks to a racing partnership with Ferrari that dates all the way back to 1929 when Shell supported Enzo Ferrari himself, the company has used what it learned on the racing side to help in the development of its road fuels.

“Back in the late ’80s and early ’90s you could smell Formula One fuel miles away… it was awful stuff. It bore no relationship with the fuels you and I put in our cars,” said Albiston.

Then in the mid-’90s, the governing body for Formula One, the FIA, “basically built the rules around road-going fuels.”

Now we wouldn’t expect Ferrari drivers Sebastian Vettel and Kimi Raikkonen to have much success with road fuels at the track, but according to Albiston, Shell and Ferrari have run Formula One cars many times on regular premium fuel just to test it out.

Amazingly, because of the way the engines are mapped, the road fuel was quicker in a straight line, but when it came to cornering and acceleration, race fuel came out ahead.

“It was a great relief to us, that yes, race fuels were worth developing,” said Albiston with a chuckle.

In fact, Shell is so tied in with the Ferrari racing team that it brings a complete trackside laboratory to every Formula One race.

“We need to make sure the fuel is legal the whole time… there are really heavy penalties if it’s not,” Albiston explained.

Not only do lab technicians analyze all the racing fuel that is shipped from Hamburg, Germany for each of the 21 events, they also look at the oil after each track session to detect signs of engine wear.

“It’s critical that the health of the engines is managed by real-time analysis at the track,” he said, noting that this year the teams are only allowed five of the V6 hybrid engines and it is most important to keep them track-worthy.

Because of the extremely strict F1 regulations regarding power units, fuel enhancements that improve performance but still meet FIA standards are critical.

Last year, Shell’s 50-member racing fuels team was able to deliver a product that produced a 25 per cent performance gain on the track. That amounts to half a second per lap, and 30 seconds over the course of a race.

To drivers like Vettel, the partnership between Ferrari and Shell, that is unique in F1, is extremely important. 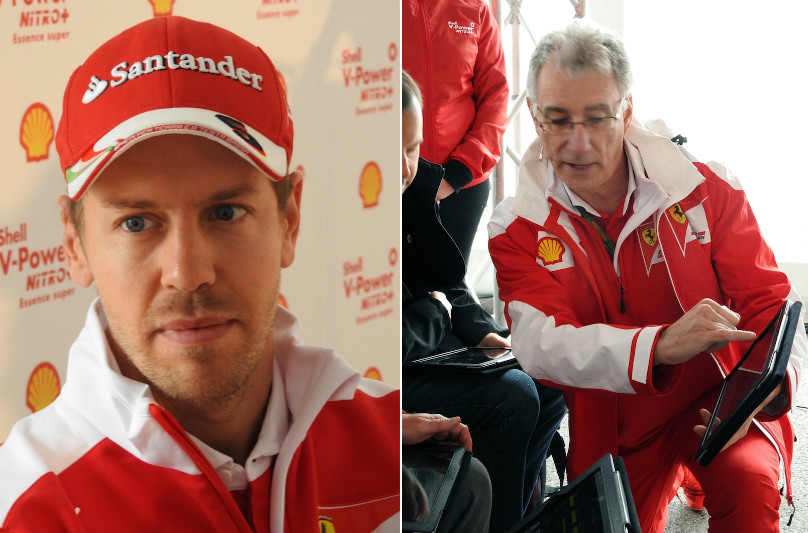 “Certainly with the introduction of the new engine era, with the new power units, the importance of fuel and lubricants grew massively,” said Vettel.

“Last year we were making a lot of gains, mostly with fuel, to get more performance,” he added, noting that it was not just one or two added horsepower, but 10-plus horsepower.

Vettel, who won the Canadian Grand Prix when he was with the Red Bull team and has had three pole positions for the race, said the Montreal circuit is one of his favourites and he was hoping for more success this year with Ferrari.

So how does Shell’s success with racing translate to the fuels we use on a daily basis?

“The technology in Shell V-Power unleaded fuel for the road comes directly from the work we are doing in Formula One with Scuderia Ferrari,” according to Benoit Poulet, Shell Formula One Fuels scientist.

“But that’s not the end of the process, far from it. In Formula One you are always pushing for that little bit of extra performance and that’s a philosophy we apply to our Shell V-Power Unleaded road-going products.”

To demonstrate that not all gasolines are created equal, Sarina Arnold, a fuels scientist from
Shell’s technology centre in Houston, Texas showed off a dual fuel car that runs three cylinders on Shell’s V-Power NiTRO+ Premium gasoline and the other three cylinders on a lower quality premium fuel. 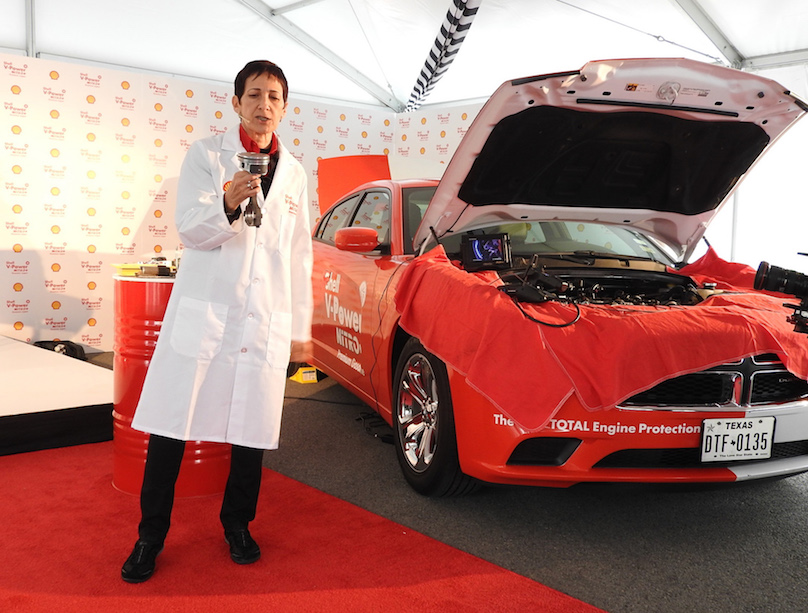 “The fuel is actually designed to coat the metallic surfaces of the engine and it acts like a barrier,” she explained, holding up parts like fuel pumps, injectors and pistons that can be affected by lower quality fuels.

Wear can occur wherever there is metal-to-metal contact, particularly in the fuel pump and injectors.

Corrosion is a gradual degradation of metal surfaces and it can occur in places like fuel lines, fuel injectors and the fuel pump due to the presence of moisture and other contaminants.

The formulation in NiTRO+ Premium is different from the earlier V-Power gasoline in that the two key cleaning agents perform better than the single component in the previous version.