Eye Candy: 66 Chevelle Malibu gave me love of my life, fright of my life

I bought this car for $1,800 in 1969 in St. Catharines where I grew up. It had chrome reverse rims and a rare paint colour called Cypress Green metallic. I was 19 years old at the time and decided I was going to keep this car forever.

The story: I bought this car for $1,800 in 1969 in St. Catharines where I grew up. New they ran around $3000. It had chrome reverse rims and a rare paint colour called Cypress Green metallic. I was 19 years old at the time and decided I was going to keep this car forever.

I was in high school at the time, and was driving home when I saw Rosemarie, the girl I liked in Grade 5. I stopped and asked her if she wanted a ride home. We have been married for 41 years now.

I drove the car every day until 1975. All my friends started to get rid of their cars because in those days they would turn into rust buckets and you would look like James Bond going down the street with a smokescreen behind you. 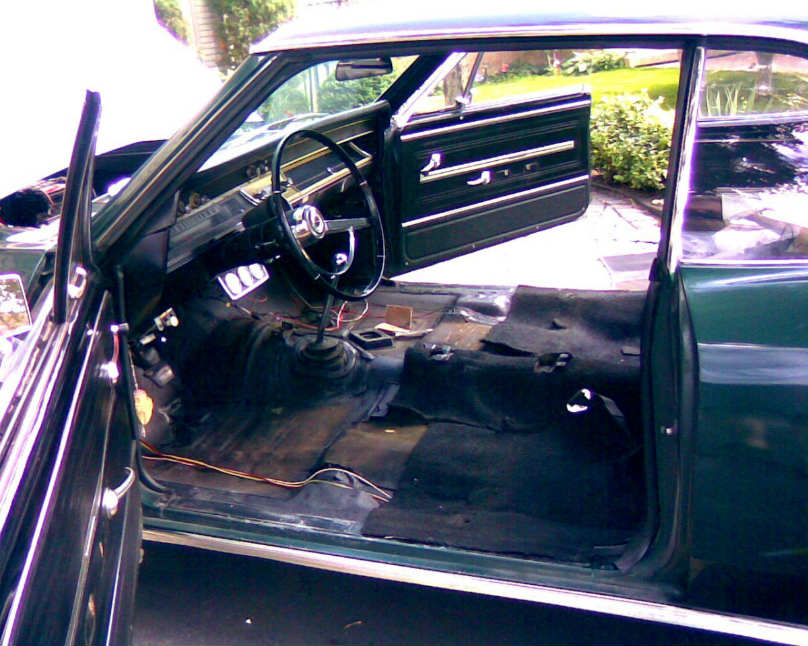 But I decided to put mine away. I kept it well maintained but would only drive once in a while.

One day in the summer of 1984 I decided to drive it to work and show my friends. I was standing at a window with a friend admiring my Chevelle when a car pulled into the parking spot beside mine. I watched in horror as he flung his door open and decided to use my door as his next Picasso painting. When I regained consciousness I ran out and in my best Marlon Brando voice I said “you are going to pay for the repair.” He agreed very quickly!

In 2010 I decided to restore my car as close to factory as possible. I put it up on stands and started my labour of love. I stripped it down and thanks to the Internet I was able to acquire all the parts I needed. I brought the 4-speed Saginaw transmission to a local shop where they were able to get all the parts to do a great rebuild. I had a lot of parts shipped in from the U.S.; I paid crazy money for duty and brokerage fees but was extremely happy when I finished after 6 months. 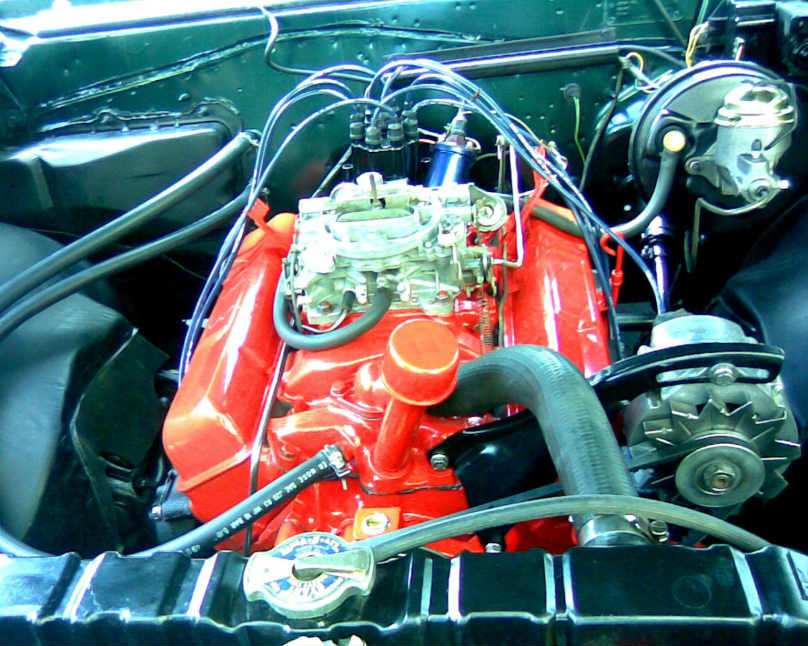 In 1979 Elizabeth was born and I decided to pick my wife and her up from the hospital with my Chevelle. That was Elizabeth’s first ride of many in that car. In 2011 Elizabeth decided to get married and she wanted me to drive her to the church in the Chevelle. That was one of the best rides I ever took. We preserved great memories that day when we took lots of pictures. 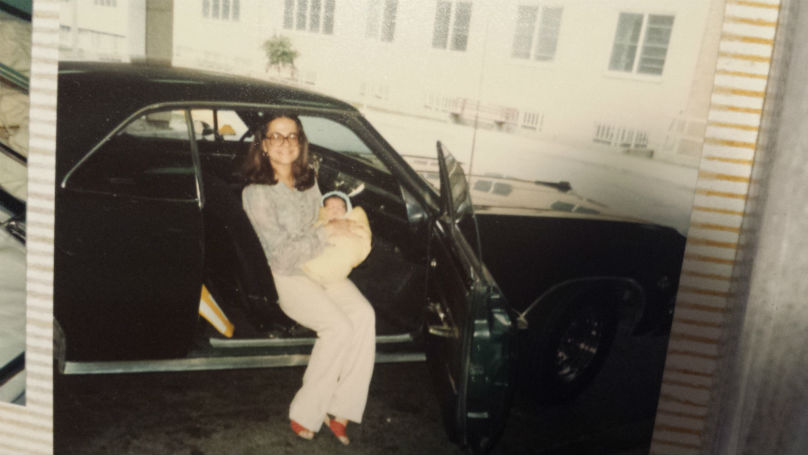 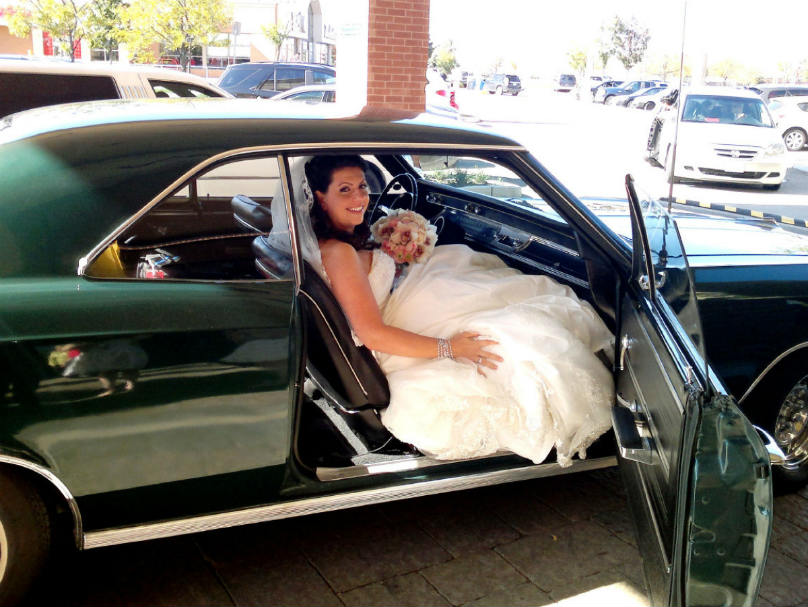 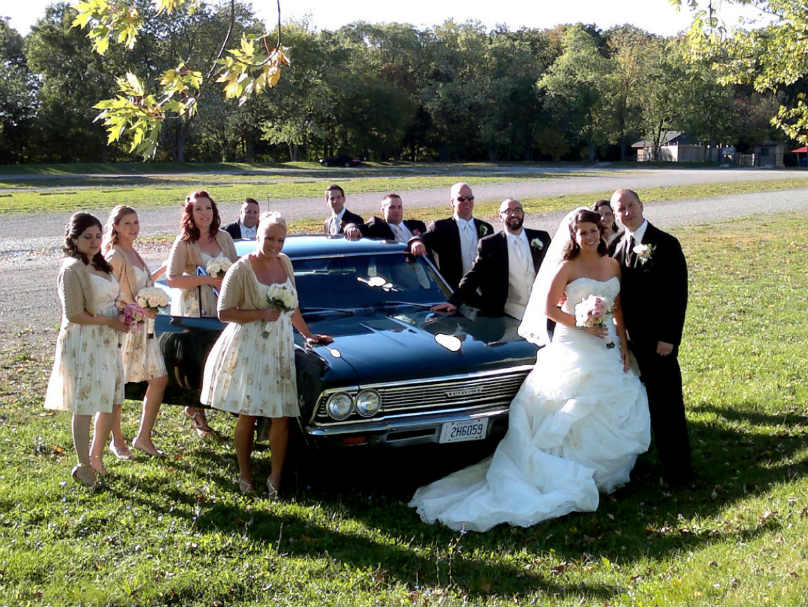 A couple of years ago I decided to take the car for a “boot” and clean out the carbon. It was one of the hottest days of the summer, over 38 C. I was crusing along on the 410 at ‘Ridiculous speed’ enjoying the ride and listening to Roy Orbison on my 8-track cartridge player.

I was in the centre lane and decided to go into “Ludicrous speed” when all heck broke loose. The shaking was over 10 on the Richter scale. I looked over my shoulder and saw cars scattering all over the place when pieces of rubber shrapnel were hitting them. I managed to get to the shoulder safely and stopped. I got out and the first thing I did was covered my pants with a brown chamois, then I saw what had happened. The right front tire blew up (literally), and used the steel belts to play a very mean game of “who’s your daddy” on my fender. 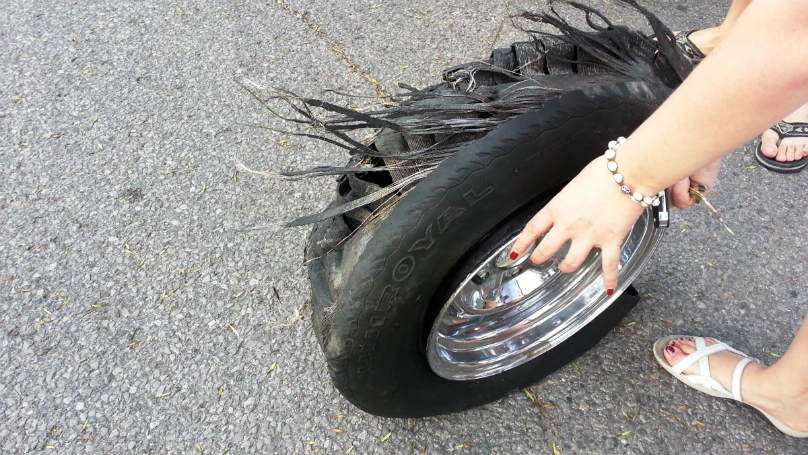 $5000 later the car looked as good as new. The tires had a lot of tread on them and looked very good, but the rubber deteriorated over the years. 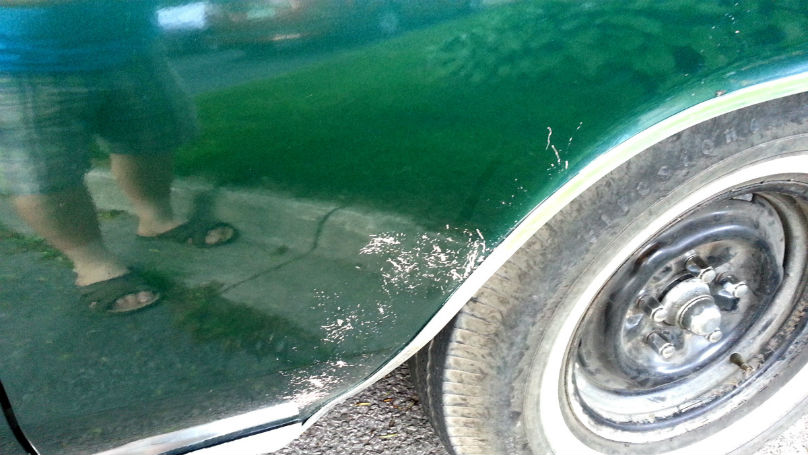 Now go to car shows and on Sunday drives. I like taking friends out and watching them turn white when I open up the 4 barrels and hear that awesome sound of 10 Hoovers gasping for air. Some day it will be up to my son John and daughter Elizabeth to decide how they will share the car. My Chevelle — what a great memory maker.