The Story: I had always thought it would be great to own an antique car with a wooden steering wheel, and when I heard through word of mouth there was a 1918 McLaughlin Buick stored in a garage in Colbourne, I knew it was just the vehicle I was looking for.

That was in November 1953. The car was stored with a lot of cord wood, so it had been kept nice and dry for many years.

It was last licensed in 1929, had a damaged rear fender but it came with a brand new replacement fender — still wrapped in excelsior. A woman doctor who owned the car had rolled it on its side into a ditch and she had thought it would never drive again.

The four-cylinder engine had overhead valves with exposed rockers, and when you started it up, all these things in the motor were bouncing up and down.

It needed a lot of cosmetic work. Even though it was kept dry, the convertible top had deteriorated and had to be replaced. A British mechanic, who was a friend of mine, took the head off the engine, cleaned the valves, replaced the radiator hoses, and put on new brakes, all of which was quite a bit of work.

When it had originally been built in Oshawa, the body was painted green with black fenders, but I had it repainted all green.

I wrote a letter to Sam McLaughlin, who started the McLaughlin Motor Car Company in 1907, to let him know how I had found and restored the car. It was nice to get a signed letter of appreciation back from him.

You may also like: From Carriages to Cars: The Early Canadian Automotive Industry 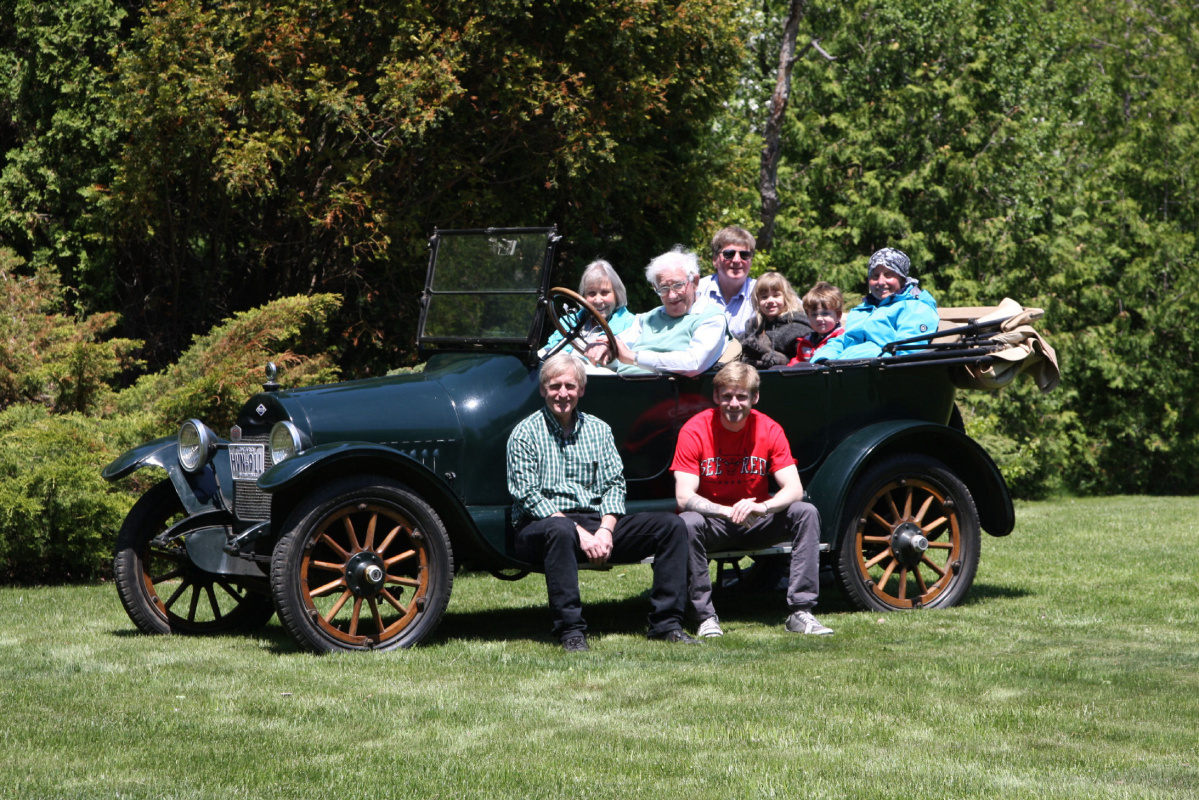 Just a little shy of it’s 100th birthday, Donald Cruickshank’s 1918 Oshawa-built McLaughlin Buick is a roadworthy piece of Canadian automotive history that’s been in the family since 1953.

The year my McLaughlin was built was the same year McLaughlin’s car company joined Chevrolet to form General Motors of Canada, with Sam serving as the director and president until 1945. McLaughlin-Buicks continued being built until 1942.

A fellow at the Imperial Oil Esso gas station on Mount Pleasant Rd., right next door to our family horticultural business, C.A. Cruickshank, managed to find five new tires that were shipped in from Manitoba.

I’d take the car out every week, and we’d take it on family outings. One summer, we drove out to a motorcycle run up north, towards Bancroft, which was quite a long trip for a car of that vintage.

And it sure was a lot of fun cruising at the front of the Grey Cup parade in Toronto in 1957, which was the same year my wife, Claire, and I were married. We’ve raised a daughter and son, and now we’ve got four grandchildren.

We both still drive and just recently renewed our licences. Claire didn’t drive the McLaughlin because it has a complicated and difficult standard transmission and the steering is really stiff.

We took it up to Bud McDougald’s estate on Leslie St., in North York, in 1961. It was a big event, and I got a commemorative plaque for the dashboard of my McLaughlin. (John Angus “Bud” McDougald was a famous Canadian businessman and thoroughbred race horse owner.)

I also had it displayed it in the showroom of the Parkwood Pontiac-Buick-Cadillac dealership in North Toronto in 1966. I didn’t receive any money for the display, but it was nice that they thought it was worth showing. It was beautiful to look at it.

It’s given our family a lot of great memories. The last time we took the car out for a drive was in 2015 at a family gathering at my home in Gormley. It was a glorious sunny and happy day in May.

At the age of 88, I’ve decided it’s time to downsize, a term I really don’t like, and sell the McLaughlin, so now I’ve got it stored up on jacks in the garage. It will be sad to see it go, but I’d like to see it go to somebody who is going to maintain it and enjoy it as much as our family has.

It’s more than just a car. It’s a piece of Canadian history.

Show us your candy: Got a cool custom or vintage car? Send us a picture of you and your family with your beauty, and your story. We like photos — the more the better — of the interior, trim, wheels, emblems. Email wheels@thestar.ca and be sure to use “Eye Candy” in the subject line. For a whole library of Wheels’ sweetest collectibles just Google “Toronto Star Eye Candy.”