Canadian couple spent two years riding around world on a Honda Gold Wing that ran without a single hiccup.

The Honda Gold Wing is one of the biggest motorcycles in the world. With its massive 1800 cc, six-cylinder engine and 412 kg weight, it’s an imposing sight on North America’s superhighways. So just imagine it on the narrow tracks of Indonesia, or the torn-up asphalt of northern Pakistan, or the sand-swept roads of Libya or Syria.

‘It’s a great bike for a trip like that, says Peter Sever. Comfortable and completely reliable’” just fantastic.

He should know. He and his partner Thao Nguyen returned home to Mississauga this week from a two-year trip around the world on his Gold Wing that should never have happened.

In 2007, for no apparent reason, Sever fainted at an airport in North Carolina and cracked his head open in two places ‘” the front of his skull from falling forward against the check-in counter, the back of his skull from hitting the floor. Doctors told him that at 61 years old, he’d be lucky to ever drive again.

However, aside from losing his sense of smell, he made a full recovery and he’s never fainted since. He was retested for his Ontario driver’s licence and when he rode the heavy Gold Wing successfully through a tight series of cones to reinstate his motorcycle licence, the onlookers gave him a standing ovation.

The 2008 trip with Nguyen was only supposed to be a summer-long getaway, but they just stayed away and ended up visiting 37 countries and riding 90,000 km. Apart from a set of faulty brake pads fitted in India and a couple of bad tires, they say the bike never so much as hiccupped over the whole distance.

Sever calls himself a ‘retired entrepreneur,’ who founded a computer retail company and a yacht-building business before setting up an entertainment agency. He readily acknowledges that he isn’t a poor man,  so when the opportunity came to travel for the summer in Britain with the road tour of a dance group he was promoting, he suggested to Nguyen that she leave her job as a French teacher for a while to join him on the motorcycle. When the group’s tour was cancelled at the last minute, the two of them went ahead with the trip anyway and extended it to include a winter away.

They rented their house to a friend for a year, sold their Infiniti M35 and took off around Europe. They carried what they could fit on the bike, and that did not include camping gear.

‘First of all, I’m 64,’ says Sever. ‘At the end of the day, you want a hot shower. Two-up, there’s no room for camping gear anyway. When it got cold in Europe, we went to North Africa and then in Egypt, we just decided, let’s keep going.’

They re-rented the house for another year and headed east across Iran and India, down to Thailand and Indonesia before crossing Australia and flying back with the bike to Los Angeles last month and riding home from there.

Along the way, the two of them contributed to their wheezyrider.com website, posting photos and blog entries and travel advice regularly for friends and casual web visitors.

It’s not been cheap ” Sever reckons the entire venture cost $150,000 from start to finish, with European hotels and motels accounting for a disproportionate amount of that ” but Sever reckons he’d have spent that living in Canada anyway. And they both agree the experiences were more than worth it.

Nguyen, who is 29, says she would have liked to have camped sometimes, especially on the tropical Asian beaches, but is still an advocate of motorcycle travel.

‘There were several times when we both said, ‘We’re so glad we’re not in a car!’ she says. ‘The roads were often narrow and in a car we’d miss the fresh air. It would be a lot more boring ‘” we’d end up falling asleep. And it would be a totally different social experience.

‘People in Asia all ride motorcycles so they understand them and can aspire to something like a Gold Wing, even if there aren’t any others in the country.’

For his part, Sever is an advocate of the big bike, although he says that this is the first time an 1800 Gold Wing has ever circled the earth.

Neither Sever nor Nguyen are strangers to travel, though neither had travelled with another person for long before this journey. Sever even drove a Volkswagen Westphalia minibus around the perimeter of Africa 34 years ago ” a trip he managed with little money, returning two years later some $6,500 in debt.

‘Not being able to afford it is often psychological,’he says. ‘There’s usually a way somehow if you really want to do it. On this trip, everyone kept telling us, ‘You’re living my dream,’ but I’d tell them that they should live their own dream. We met plenty of other people who were doing it, and most had very little money. Why not? Anything’s possible if you really want it. 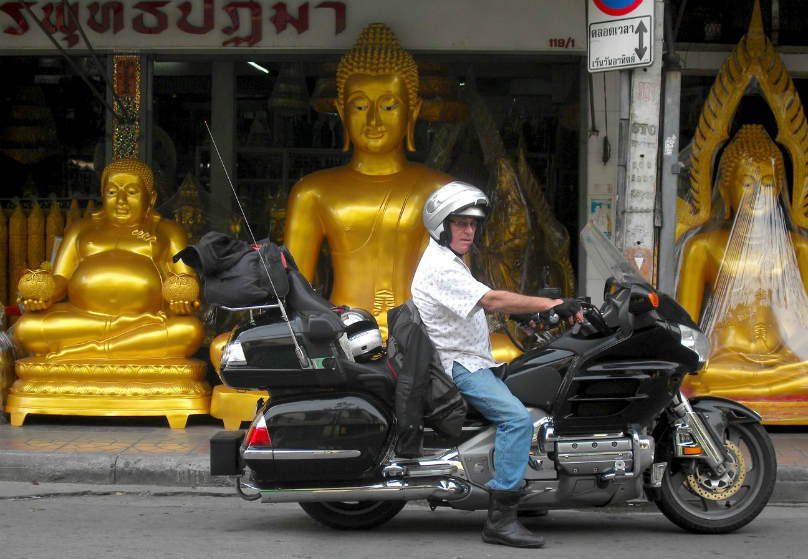 To read about and see the experiences of Sever and Nguyen on their two-year trip, go to www.wheezyrider.com

Wheels Editor Mark Richardson can be reached at mrichardson@thestar.ca.