Road to Lake Rosseau in the Fiat 124 Spider

The 124 Spider is a pleasure to live with, and a pleasant sight for onlookers as well, judging by their positive responses we received while touring Muskoka, Ontario's cottage country.

When choosing my very first car, I narrowed my selection down to four 2-door convertibles—a Triumph TR6 or Spitfire, an MGB Mark IV and a Fiat 124 Spider. I ended up buying a used MGB but it was a tossup between that and the 124 Spider.

Fast forward three decades and current car buyers can decide if the new 2017 Fiat 124 Spider will make it onto their shortlists. 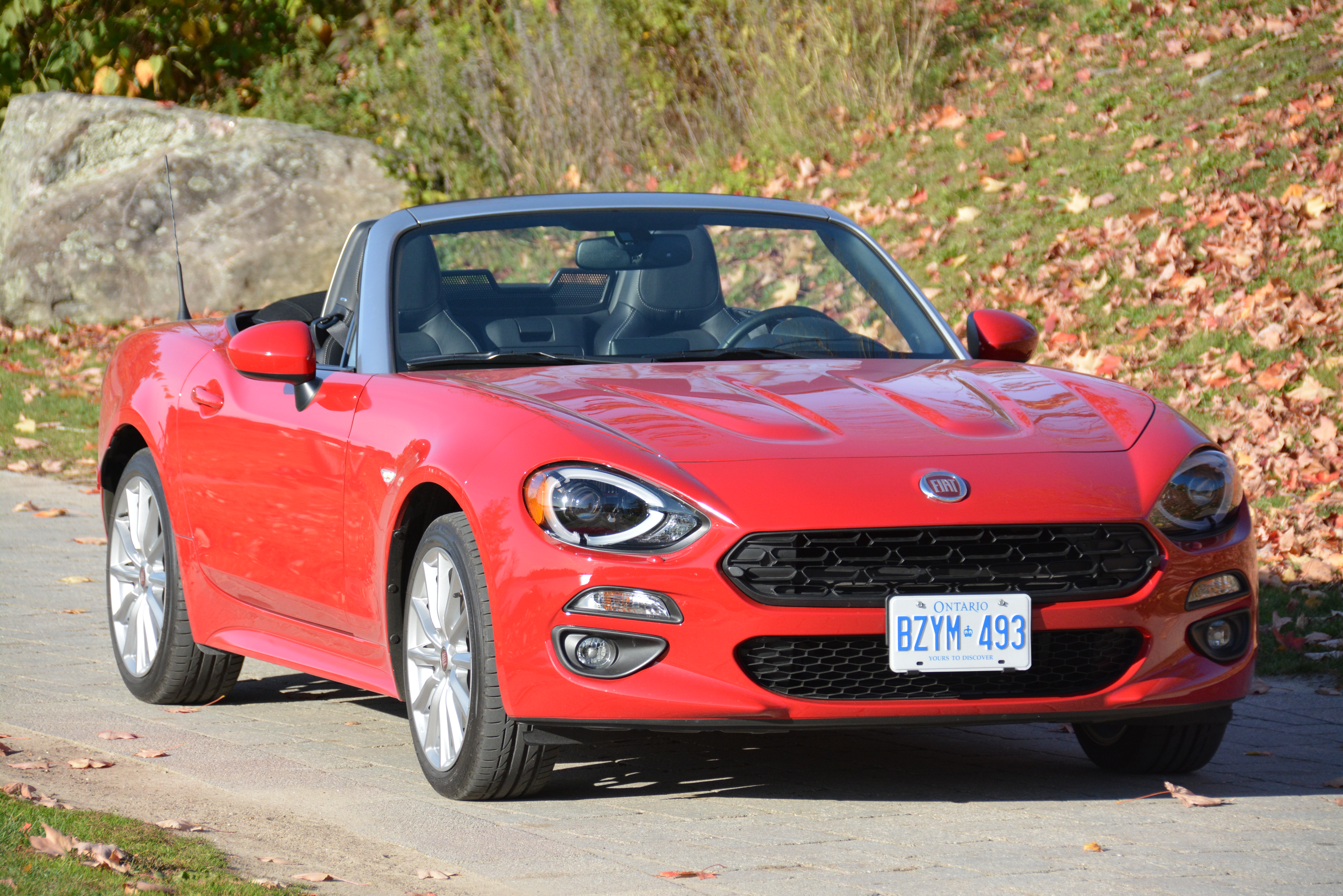 Back then the 124 Spider was made in Italy by Fiat, now it’s made by Mazda at their Hiroshima Plant in Japan and assembled alongside the MX-5. One of the major differences between the two cars lies beneath the hood. The 124 Spider has a 1.4 litre in-line 4 cylinder turbocharged engine supplied by Fiat and the MX-5 has a Mazda built 2.0 litre naturally aspirated inline 4 cylinder engine. The 124 Spider turbo generates 160 hp and 184 lb-ft of torque vs 155 hp and 148 lb-ft of torque for the MX-5. Our 124 Spider was equipped with a 6 speed manual transmission which is one generation old, the MX-5 has the next generation manual. Ours worked very well with short throws and a real throwback sports car feel. 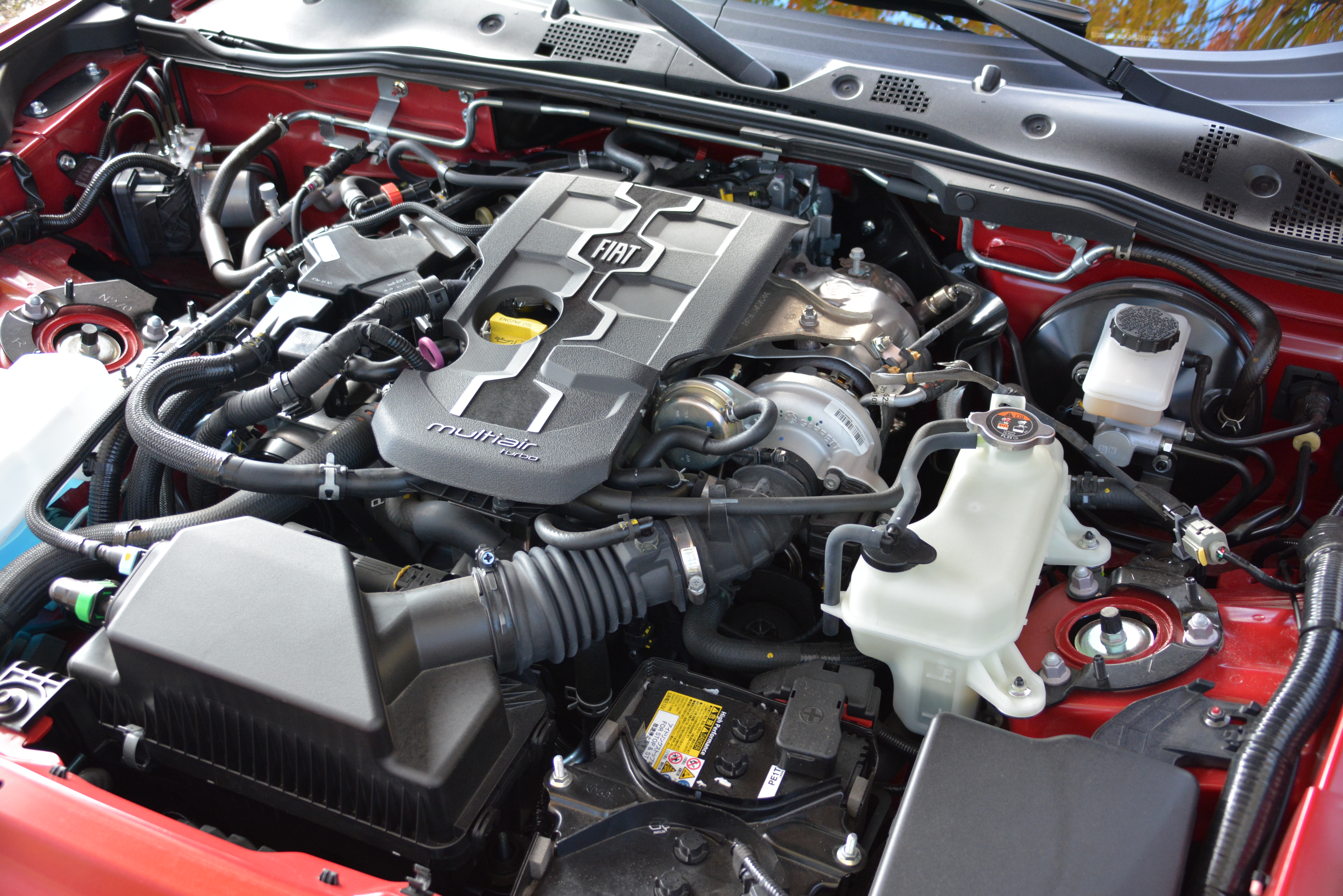 At only 2,436 lbs—with the 6-speed manual—the 124 Spider is very small and light on its feet. In the city at low RPM’s there is a sufficient supply of power—most of the time. Once you get moving and can get the revs above 3,000, the turbo kicks in and off you go. And off we went, a couple of hours north of Toronto to JW Marriott The Rosseau Resort and Spa on Lake Rosseau in the picturesque Muskoka region of Ontario.

We were driving a Lusso model in Rosso Passione red with black leather-faced bucket seats. The base Classica model starts at $33,495 and the sportiest Abarth starts at $37,995. The Lusso, which sits in the middle of the range, starts at $36,495 and comes well equipped with a backup camera, keyless entry, push button start/stop, and heated seats. 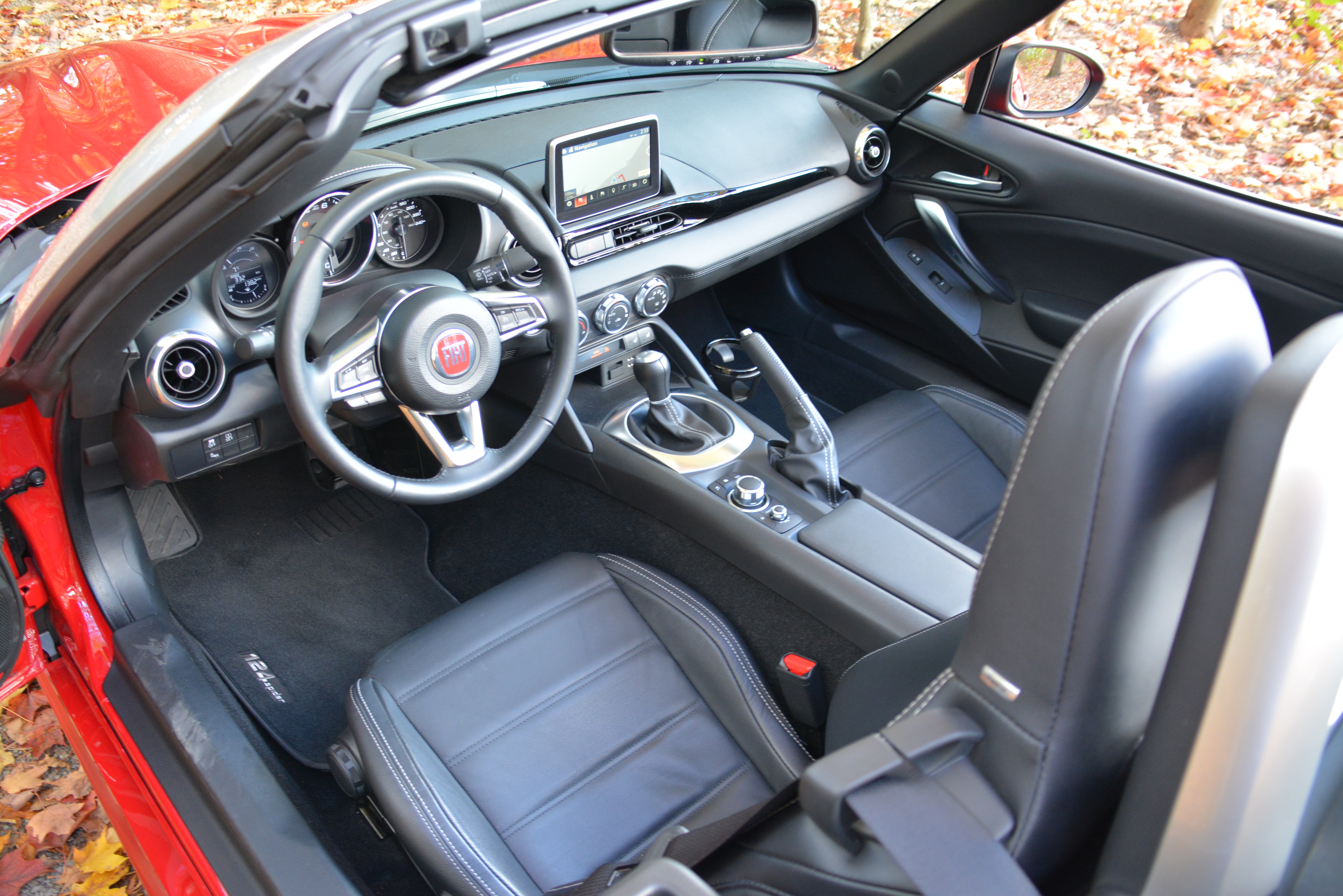 Our car was fitted with the $4,200 Premium Collection package which includes GPS, satellite radio, headlamp washers, LED headlamps with daytime running lights, alarm, 9 Bose speakers, park assist and blind-spot assist. Our as-tested price was $42,590 including the $1,795 destination charge plus tax.

With the convertible top up, lane change assist is welcomed in a car like this as there are fairly significant blind spots on both sides of the car. Hopefully owners of this car get to drive it with the top down most of the time where the blind spots are a non-issue.

Because this was a cool autumn drive, we had to keep the top closed on the highway and there was plenty of wind noise emanating from the rear part of the soft-top. The 124 Spider is more than one hundred pounds heavier than the MX-5 and some of that extra weight goes towards sound deadening materials. The 124 Spider remains a few decibels quieter than the MX-5 but it is still quite loud. Once off the highway and onto the winding roads with the top down, the 124 Spider delivers a classic small nimble roadster driving experience.

The soft-top operation is a manual affair and very easy to use; one twist of the centre mounted lock/unlock handle and with one motion you push the top down into its storage compartment. It can be accomplished in just a few seconds. No waiting for electric motors to raise and lower the top. Classic old-school convertible style.

One of the great things about driving such a small light car is you really feel like you are driving it, and not just along for the ride. You sit very low and close to the road and you know where all four corners of the car are at all times. Add in the manual transmission and you become very focused on the driving experience. There’s not a lot of opportunity to do or think about other things, which is a very good thing.

The only distracted driving you get with a car like this is taking in how much fun you are having with the top down in this throwback “European” sports car.  I know, it’s built in Japan, but it does have an Italian heart. And it has European-tuned handling as well. The 124 Spider is fitted with similar MX-5 suspension components but Fiat has tuned the suspension to dial out some of the body roll, providing the driver with a greater sense of confidence in the corners. 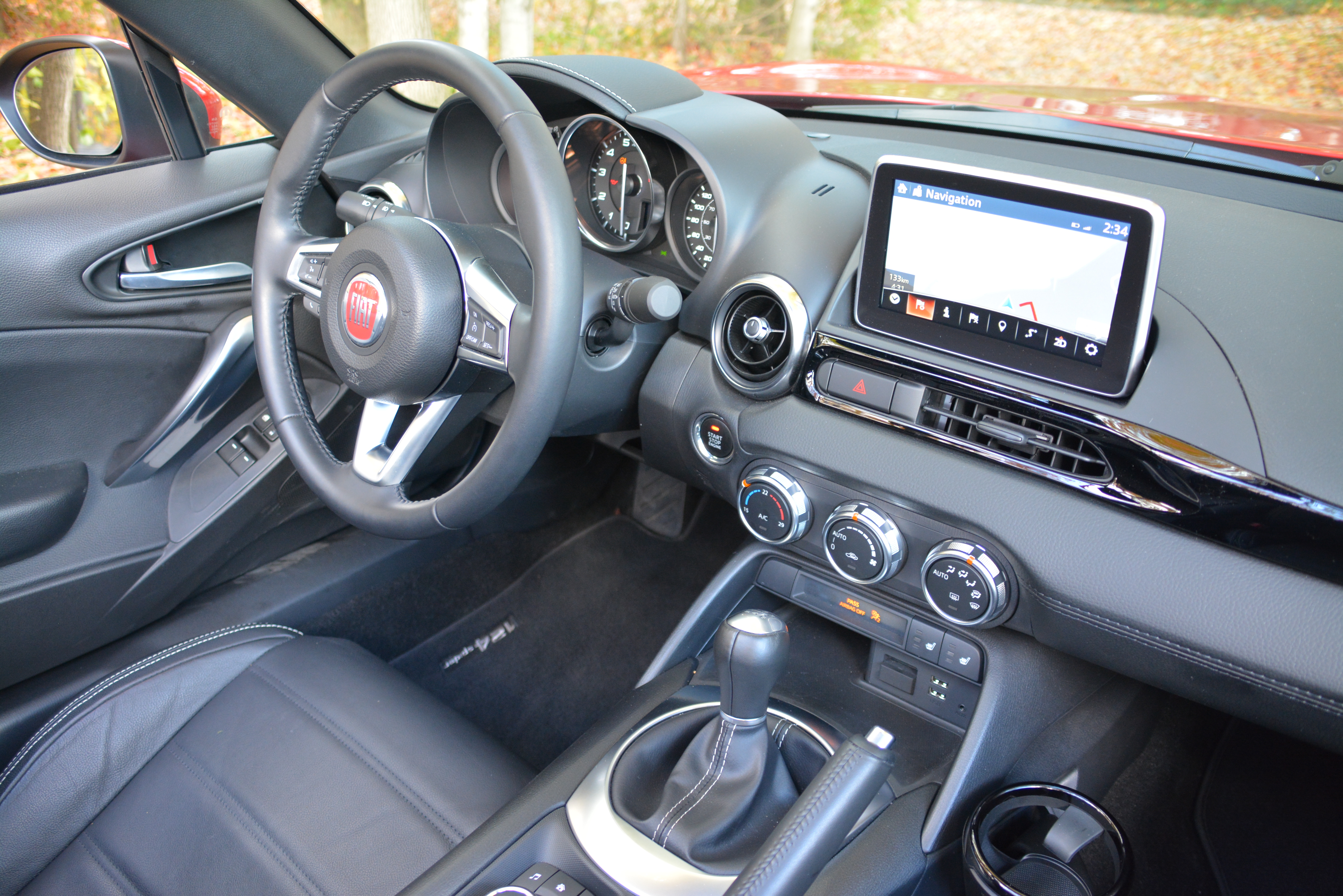 One of the unique features of this car is the incorporation of the speakers for the hands-free phone into the driver’s headrest. The speakers are right behind the driver’s ears and therefore much easier to hear when driving with the top up or down. The rest of the speakers in the car are used for listening to the entertainment system, which includes satellite radio and iPod connectivity.

Once at The Rosseau we were able to take in the spectacular lake views which were enhanced by the impressive fall colours. The resort—celebrating its 9th anniversary in December, has 221 rooms and is situated on 22 acres with a 100-foot granite bluff. One of its many unique features is a year-round indoor/outdoor pool. It has earned a spot on the Condé Nast Traveler Readers’ Choice List of Top Resorts in Canada for three years in a row. Two of its many restaurants have just received Wine Spectator Awards of Excellence for 2016 and it was named one of the ten best resort views by National Geographic. It is a beautiful all-season destination resort.

You may also like: 8 Cross-Canada Winter Chalets And Cottages For An Overnight Road Trip

As we were leaving the resort to head back to Toronto we got caught in an early dose of winter. Several centimeters of snow fell and it took about 20 minutes to creep up a snow covered hill with the traction control working overtime, but doing a great job of keeping us pointed in the right direction, moving at only a couple of kilometers per hour.

Once successfully up the hill we stopped to refuel at a local Muskoka gas station and there in the parking lot was an original Fiat Spider, badged a 2000. They looked great together and it would have been so nice to have been able to drive both back to back. We headed south to Toronto in our new Fiat Spider and had no issues with the slush covered roads along the way.

The 124 Spider is a pleasure to live with, and a pleasant sight for onlookers as well, judging by their positive responses. They wanted to know all about this car and they liked what they saw and heard. With an engine that has more torque than the MX-5’s—flatter handling suspension tuning, more sound insulation and likely fewer of them on the road—the 2017 Fiat 124 Spider is a good option for those looking for something a little bit different. 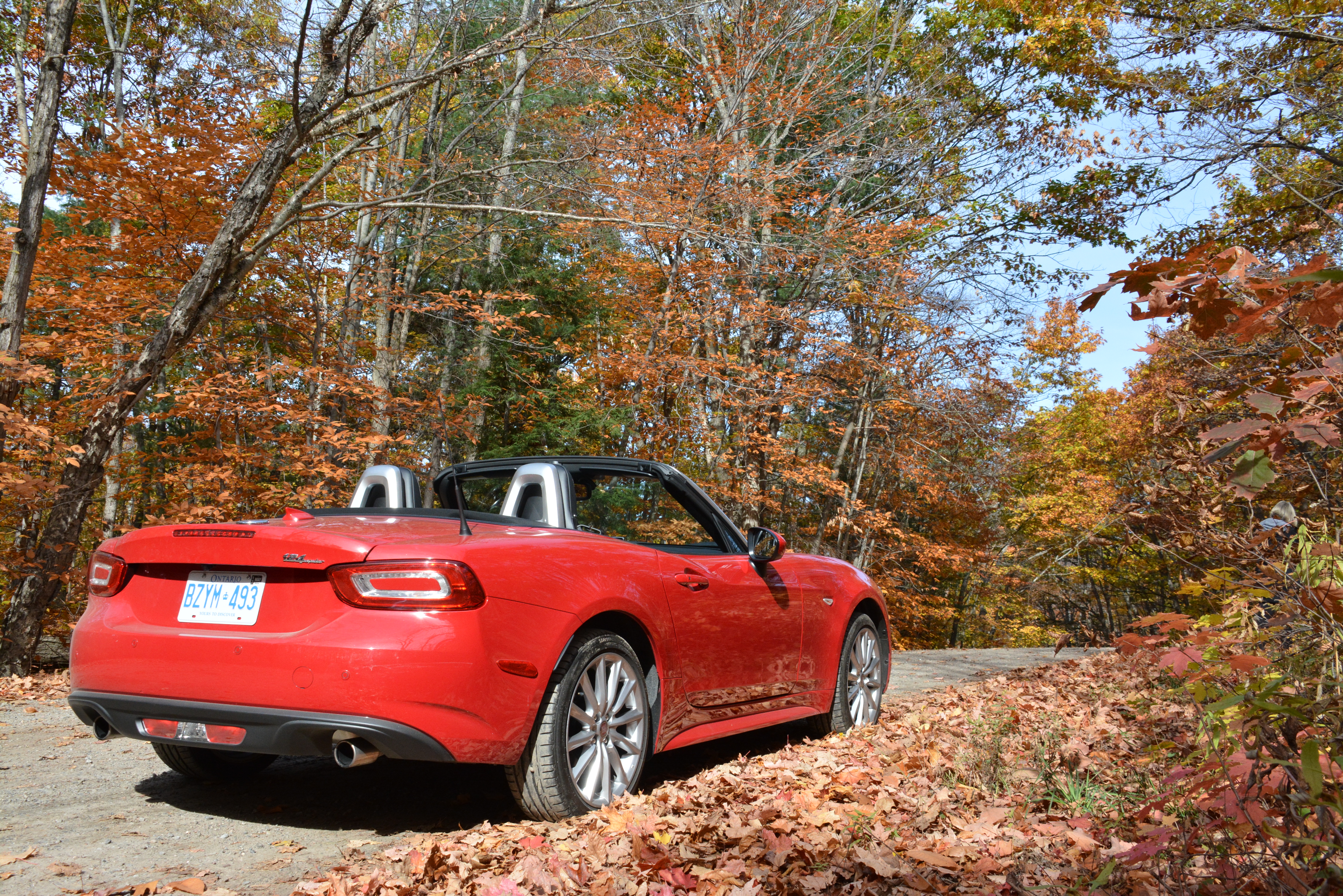