An Impala-inspired redesign of the Malibu refreshes the style and stance of Chevy’s popular mid-size making it lighter, stronger and smarter

The seeming stampede of customers abandoning regular cars for the craze of crossover alternatives has been somewhat exaggerated.

But in the midst of a current four-door sedan segment slide, a highlight recently pierced the doom and gloom when an all-new mid-size sedan from General Motors debuted last year at the New York Auto Show.

When I pulled up for a test drive just outside Toronto, the 2016 Chevrolet Malibu looked as good in Mississauga as it did in Manhattan – longer, lower, lighter and leaner, sleeker with Impala-inspired curvaceous lines, impressive with new interior quality levels and loaded with amenities and new-for-Malibu available technologies including:

But let’s not get ahead of ourselves. 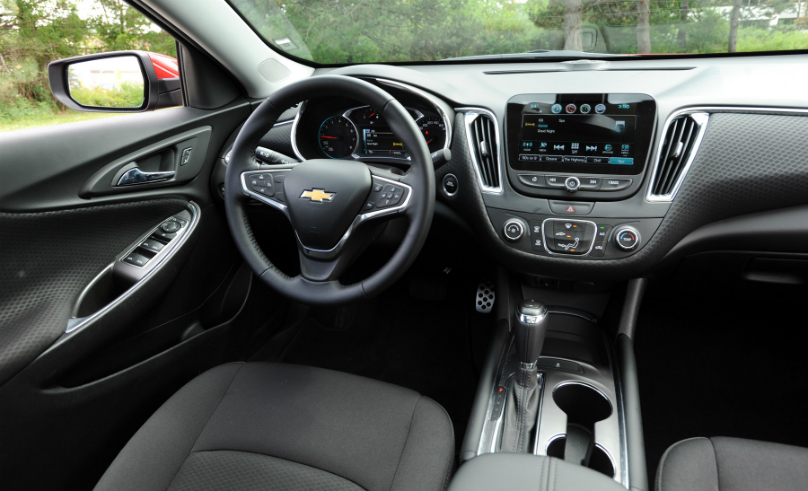 The new Malibu starts with a lighter, stronger platform, stretching the wheelbase by 91 mm (3.6 in) and the overall length by 58 mm (2.8 in), benefitting both ride smoothness and interior room. Despite the size increase, a diet of high-strength steel and a stringent weight-reduction program has slashed the Malibu’s mass by 136 kg (300 lb).

RELATED: Preview: 2017 Ford Fusion keeps its good looks, gets better under the hood 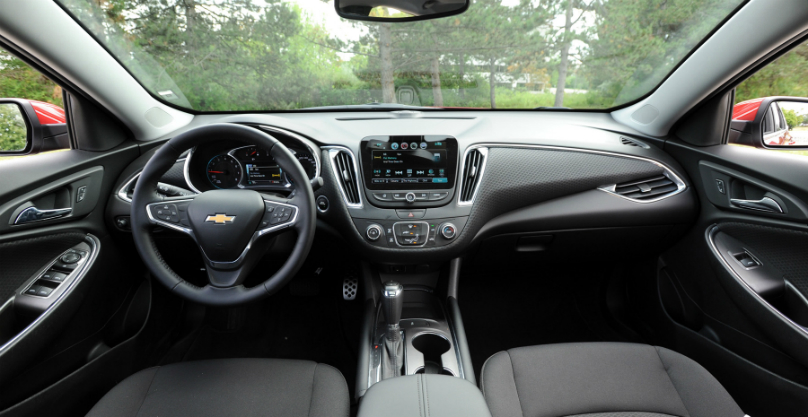 Under the hood, the Malibu debuts a new standard turbocharged 1.5-litre Ecotec four-cylinder with VVT and stop/start technology. Fuel economy is rated at 8.7/6.3L/100m (city/hwy) and my mixed bag of driving averaged out to 8.4L/100km (comb).

That acceptable level of fuel efficiency doesn’t come at the cost of power, although the 1.5-litre’s 166 hp might raise a few eyebrows at first, especially considering the 195 hp rating of the previous generation 2.5-litre engine. 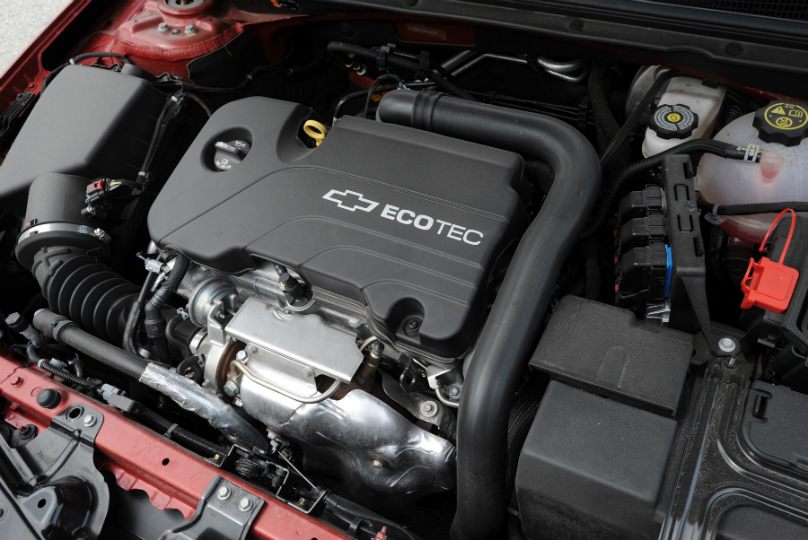 But the more important grunt of peak torque, at 184 lb/ft, is almost the same, an acceptable trade-off considering the new mill’s smaller and lighters dimensions, contributing significantly to the Malibu’s overall weight loss.

For those looking for more oomph output, the Premier trim level substitutes a bigger 2.0-litre turbocharged unit making 250 hp and 266 lb/ft of torque, channeled through a new eight-speed automatic and offering only a mild fuel economy penalty at 10.6/7.1L/100km (city/hwy). 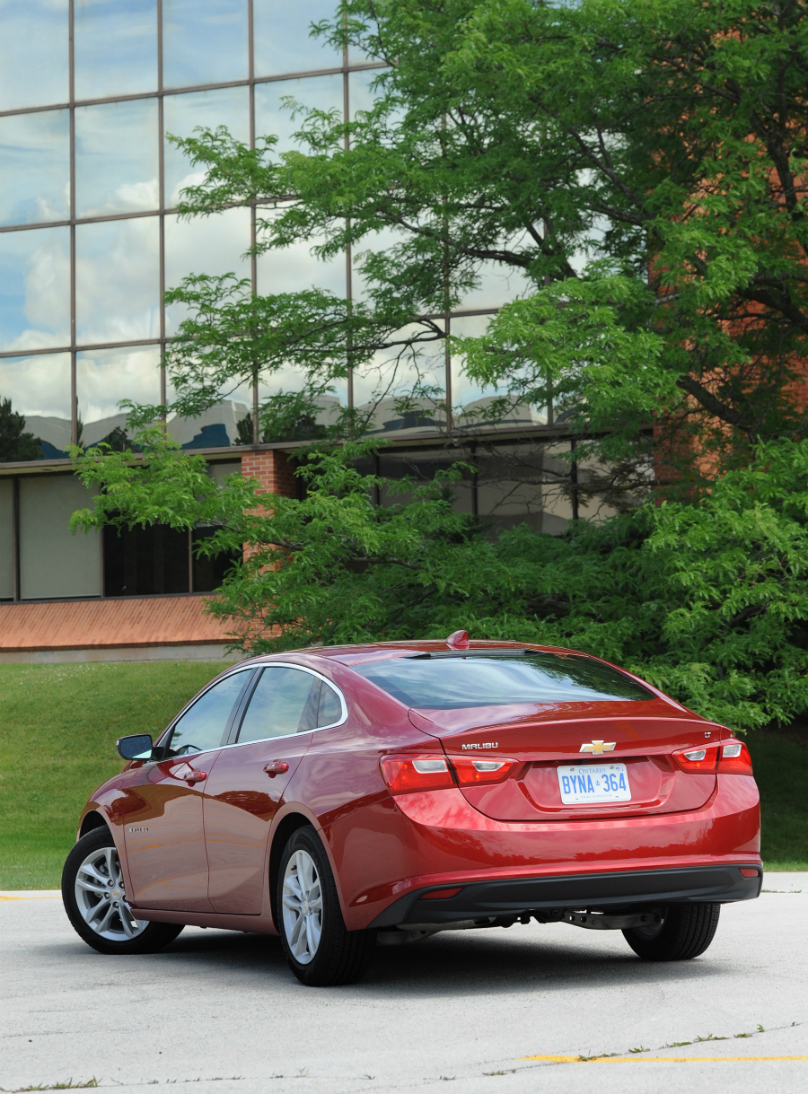 But my second test drive within the Malibu lineup looked at a different mix of power and performance – the 2016 Malibu Hybrid.

The Malibu Hybrid is based on the content level of the LT; so starting equipment levels are similar to our first tester. 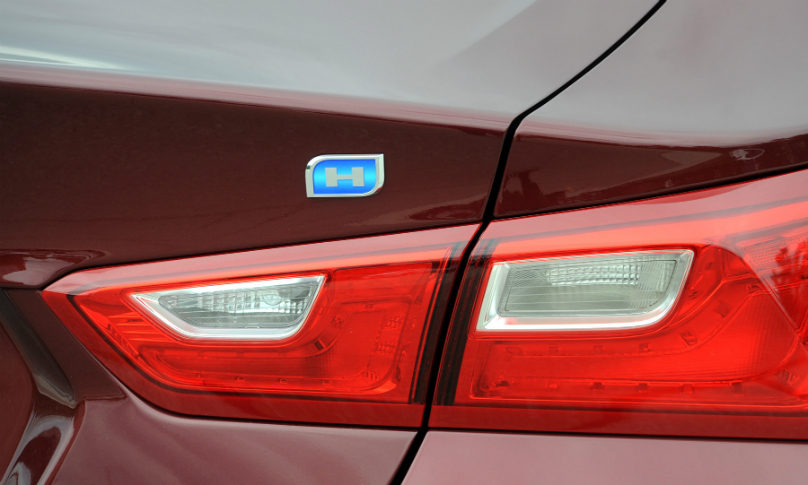 But a new direct-injected 1.8-litre engine is mated to a two-motor electric drive unit, harnessing components from the Chevy Volt and combining for an overall 182 hp and 277 lb/ft of torque.

I noted that the Malibu LT was smooth but the hybrid feels even smoother with near-seamless power shifts between the gasoline engine and electric drive systems.

An 80-cell, 1.5kWh lithium-ion battery pack allows occasional EV-only running up to 85 km/h and plenty of torque assist from a standstill. That pack wedges in the trunk behind the back seat. 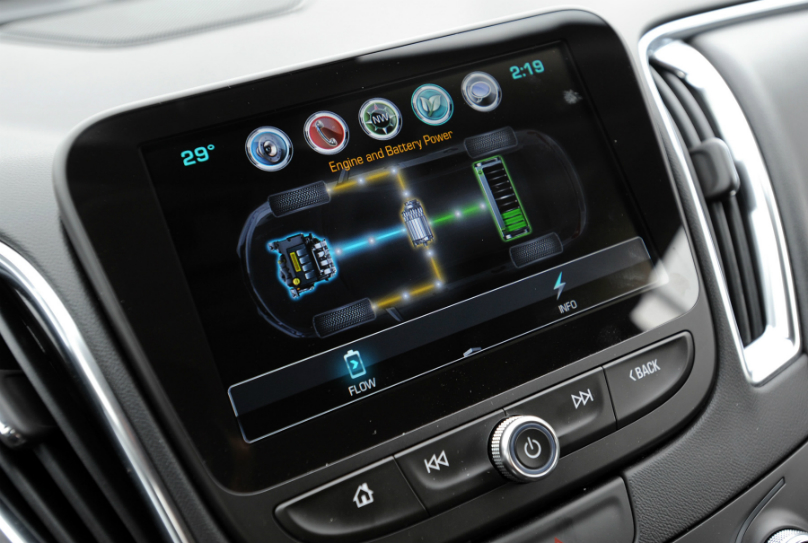 There’s still room aplenty for overnight bags but cargo space is reduced to 328 litres, compared to 477 litres in a regular Malibu. And, of course the batteries and extra components add back all the weight pared from the new model (about 150 kg), sort of like having your fat Aunt Freida permanently ensconced in the back pew.

On the plus side, Chevrolet’s first application of Exhaust Gas Heat Recovery, along with Exhaust Gas Recirculation, the regenerative braking system also taken from the Volt, and the included start/stop system combine with inherent hybrid strengths for a thrifty fuel economy rating of 5.0/5.1L/100km (city/hwy).

I always take hybrid systems as a personal challenge so I drove with the proverbial wineglass under the gas pedal and managed to beat the official rating with a real world average of 4.7L/100km (comb). 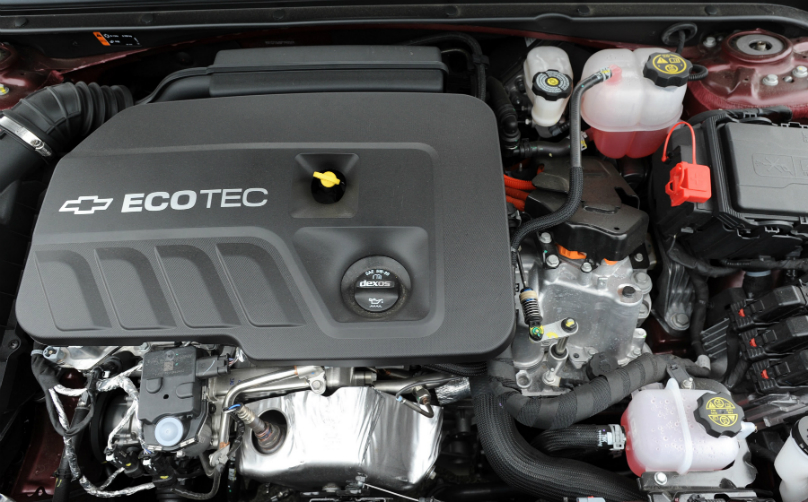 Bean counters will always parrot that hybrids aren’t fuel efficient enough to make up for the price difference, and even GM’s estimates, based on 20,000 km per year, reckon a $1,112 annual fuel cost for the hybrid compared to $1,657 for our first LT tester.

But hybrids are more about the feel good factor of being environmentally conscientious than cold, hard economics.

And, regardless of whether customers opt for entry-level trim positions, performance oriented turbo power, a luxury version or a more sustainable hybrid application, the new 2016 Chevrolet Malibu offers a wide selection for customers not quite ready for crossovers and still comfortable with modern mid-size sedan choices. 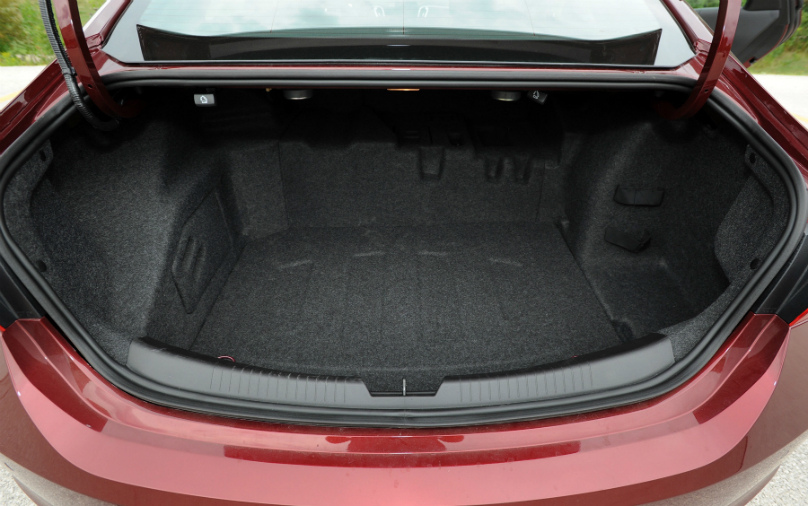 Which is why the Malibu is one of the few cars to buck the downward sales trend in the sedan segment.

The 2016 Chevrolet Malibu lineup – definitely worth looking into.

You May Like: Mid-cycle refresh for mid-size Honda Accord