Nissan’s midsize offering provides basic motoring, but there’s nothing to get excited about with this 2016 update.

The Nissan Sentra is not a bad car, but I didn’t like it. There was no single glaring issue, only an overall impression of automotive ambivalence toward the art of driving, a lack of passion for the task at hand.

In its never-ending quest for mileage, my Sentra tester’s continuously variable transmission sought out the lowest possible ratio (highest virtual gear) and then clung to it like a bulldog with a chew-toy, requiring large dollops of throttle to invoke any sort of meaningful response. The steering, though accurate and nicely weighted, offered minimal feedback and only casual self-centering action. Wind and road noise at speed were more intrusive than the car’s generally upscale comportment would suggest appropriate.

The problem is that I’m simply the wrong match for the Sentra. I’m not a potential Sentra customer, someone like my friend Ernie Harmer. He values comfort, space, and efficiency, not pace. His decidedly more relaxed driving style and preferences perfectly suit the Sentra’s classy-compact demeanour.

This generation of Sentra was introduced for 2013 and has received a mid-cycle refresh for 2016. As has often been the case in generations past, the Sentra is Nissan’s mini-Maxima, aping the style, shape, and spirit of the brand’s flagship sedan. The refresh realigns the front-end and tail lights with the company’s current styling language, tweaking the chassis tuning, and adding several active safety and convenience features.

This is no longer a small car; Nissan’s Versa and Micra occupy those roles. It’s now officially classified as a midsize car, competing in a segment that includes the Toyota Corolla, Honda Civic, Chevy Cruze, and Hyundai Elantra.

How big is the Sentra, really? Well, at over six feet tall, Ernie’s not a small man, and he fits comfortably with room to spare. At just under six feet, I could sit behind him and still have legroom — so there’s ample space for your average family of four; it’d be cozier for five. The trunk is sizable at 428 L.

The split rear seatback folds to reveal a large aperture, however the folded seats are at least 15 cm higher than the floor of the trunk, limiting the size of what will fit through.

Interior fit and materials are class appropriate with plenty of soft-touch surfaces. 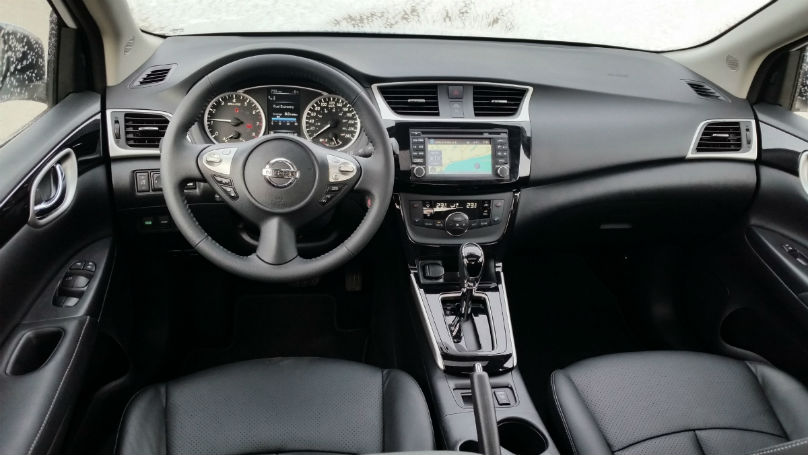 Under the Sentra’s hood you’ll find a new version of the company’s 1.8-litre four cylinder engine. Oddly eschewing the current trend toward direct injection, this powerplant is good for 130 hp and 128 lb-ft. of torque — 2 horses shy of Toyota’s 132 hp Corolla, ranking it the lowest in its class — and it feels like it.

Base and SV Sentras come with a six-speed manual. A CVT is optional there and standard equipment on SR and top SL models, like my $26,298 Aspen White tester. Those higher trims now feature LED low beam headlights.

New to the Sentra lineup for 2016 are a couple of electronic driver aids. While blind spot and rear-cross traffic warning systems (BSW/RCTA) are now available on all but base Sentras, the SL model comes with active emergency braking (FEB), a radar-based system which also provides the convenience of full adaptive cruise control.

Driving the Sentra, I found it hard to reconcile that this is the same company that builds Godzilla — the mighty GT-R — and whose flagship Maxima is touted as “the four door sports car”.

Nissan, like Mazda and even Honda, has long had an enthusiast soul; you’d never know it here. The Sentra’s handling is secure enough for the urban cut and thrust, but there’s little joy to be had in the process, because the car’s nice, meaty, 370Z-inspired steering wheel has very little to say about what’s happening at the contact patches. At least the brakes are firm, progressive, and confidence-inspiring. And there’s a proper handbrake — hallelujah!

I found the behaviour of the CVT annoying and jerky, and though I was impressed with the overall smoothness of the Sentra’s engine, it left me wanting for power on highway on-ramps. It’s probably psychological, the result of the CVT’s disconnect between road speed and engine speed, which sees the motor wailing away at its 6,000 rpm power peak under hard acceleration.

Ernie doesn’t care about that. Ernie owns a Gold Wing touring bike, and I’d challenge most riders to keep up with him on a twisty stretch of road, but behind the wheel of a car, he’s all about smooth acceleration, predictive stops with minimal braking, and 105 km/h highway travel. Ernie recently bought a 2014 Sentra — essentially, it is mechanically identical to the 2016 version — and he loves it.

He appreciates the roomy cabin, likes the excellent outward visibility, and finds the seats and ride comfortable for long trips. At his max cruising speed, the wind and road noise that I observed in my Sentra (admittedly at flow-of-traffic speeds) are far less noticeable.

While not an ideal choice for an enthusiast, in the real world of commuting and fuel bills and hockey practices, the Sentra has tangible merit. Think of it as an excellent Corolla alternative. 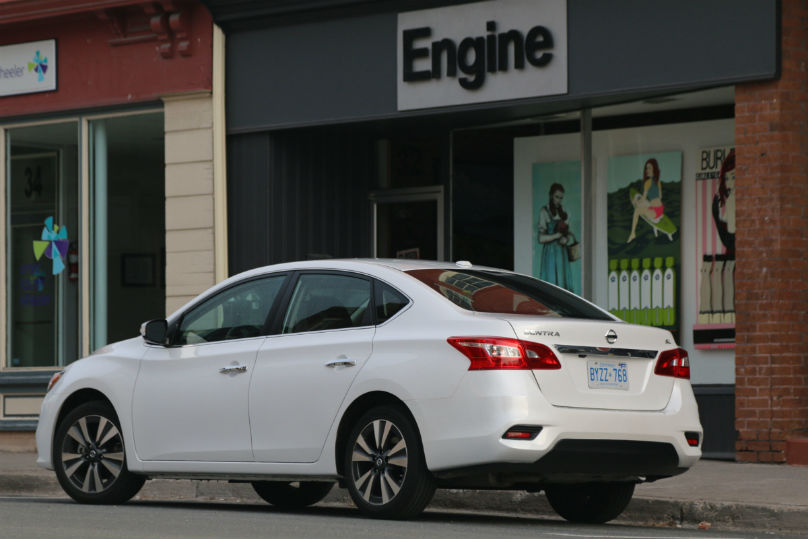