Review: Audi TT S has the ingredients for a smile

Few cars are as recognizable as the Audi TT, considered by some to be one of the company’s best designed cars. True, the first generation model looked like a sophisticated VW Beetle, but with a timeless twist. Round, proportioned and elegant, it was an iconic car at the time.

So, here we are with the third generation model. The basic shape has worn off, but modernized to keep up with the times and in line with Audi’s design language.

I’m not driving the base model, but the TT S. In addition to visual upgrades — such as a special grille, silver side mirrors and unique seat stitching — this version gets 70 more ponies for 292 horsepower and 0-100 km/h in 4.9 seconds, all from a 2.0-litre four pot engine. And you thought this tester’s Blue Sepang paint scheme made it look fast.

In the interest of full disclosure, I do own a 2002 TT. Although the basic configuration is the same, the guts are drastically different. It’s like going from dial-up Internet to a high-speed connection.

The driving position is low and accessibility does require the balance and flexibility of someone who’s been to a gym semi-regularly. Once inside, the cabin is a marvellous place to be thanks to Audi’s Virtual Cockpit.

In the place of an instrument cluster is a large LCD screen that displays everything from the speedometer to 3D maps. Powered by the same type of processor in most tablet computers, the infotainment experience is fast and fluid.

With the Virtual Cockpit, there’s no screen plopped in the middle of the dashboard, as is the case with most cars. Sorry, passenger(s), but it’s all about the driver here.

Pinch and zoom to different locations using the updated MMI controller/trackpad interface, or just set it and forget it and drive this thing like it’s meant to be. 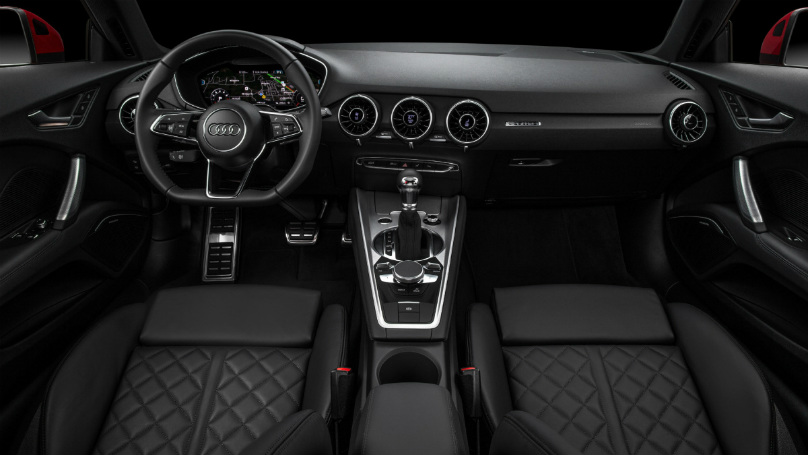 The steering is sharp and precise out on city streets. It comfortably carves its way around parked cars and changes direction with the ease of Lionel Messi dribbling through an opposing team’s defence. Left-hand turns can be easily taken with speed, without instilling any doubt in the hands of the driver. And that’s without fiddling with the TT S’ everyday drive settings.

Tap the drive mode button a couple of times and the vehicle cycles up its Dynamic settings, tightening the suspension and improving throttle response. Nudge the gear selector into S mode and the exhaust opens up: this two-door sports car is ready to sing.

Hit the gas on a highway on-ramp and the TT S accelerates with a delightfully symphonic tune that completes the feeling of increasing speed as you’re pressed back in the seat. Audi’s quattro system sends power to each wheel, ensuring the front or back end won’t pull you in the wrong direction.

This tester has Audi’s six-speed S-tronic dual clutch transmission, a gearbox so quick that it doesn’t make me wish there was a clutch for my left foot. It’s never hunting for the right gear and it’ll automatically downshift for you when slowing down or coming to a stop. 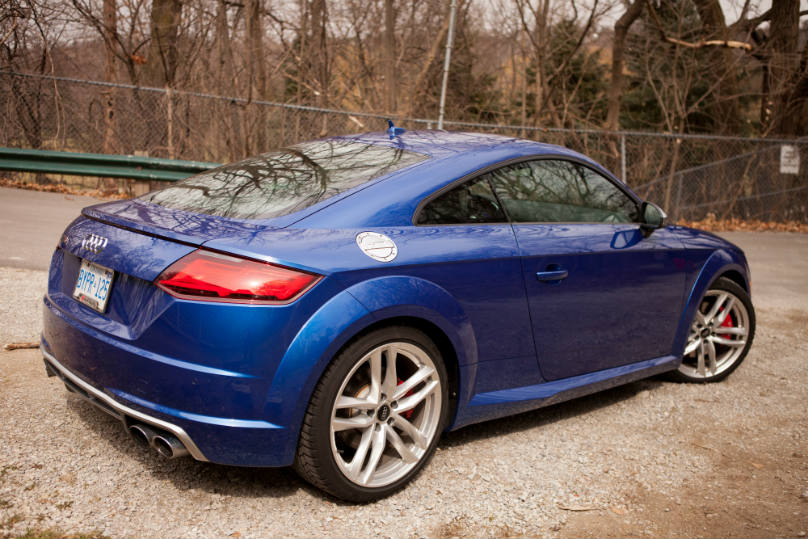 The TT S drives great and sounds amazing for having a four-cylinder motor under the hood. It’s not without compromise, however.

The back seat is symbolic, at best. Yes, it eliminates any excuse to leave your kids or friends under five-foot-one behind. But it’s not a comfortable place to be and it’s too tight for even a baby seat (yes — I tried).

Its trunk is also small, just big enough to fit a gym bag or some groceries. Golf clubs? It’ll carry two bags, but you’ll have to flip down the rear seats. I don’t know why Audi just doesn’t ditch the rear seats for a trunk that’s always usable.

One more complaint would be the location of the volume knob, which is tucked between the gear shifter and the dashboard. Sure, you can take advantage of the controls on the steering wheel. But it would seem better placed for your passenger to turn up the music than the driver.

These are relatively small niggles. If you’re buying a two-door sports car, practicality is not a priority. Driving pleasure is. And if that’s what you’re after, the TT delivers.

Towing capacity: You can’t be serious

Looks: Gorgeous, but not impressive

Technology: This sets the bar

What you’ll like about this car: Small size and fast engine

What you won’t like about this car: Options add up, it’s too much fun for city traffic