Acura’s sport sedan is back and better than ever.

The last time we drove the Acura TLX it left us a little cold. Marketed as a sports sedan it felt like nothing more than a gussied up Accord. No bad thing on its own but when compared to offerings from BMW, Lexus, and Mercedes it fell well short of that claim.

We even argued that a Dodge Charger SRT with its rumbly V8, a car that might not normally be cross-shopped with a TLX, offered way more thrills for less money.

The outgoing TLX played it too safe but there’s a new one now, and Acura says that they’ve listened to the feedback and brought back some of what made the brand so special only a few decades ago.

The 2021 Acura TLX is a clean-sheet redesign built on its own bespoke chassis and is the most rigid platform Acura has ever created, except for the six-figure NSX.

At first glance there are a lot of similarities to the last one, mainly when looking at it head-on thanks to the large diamond pentagon grille that carries over and offers a menacing stare with its slim multi-element LED headlights. 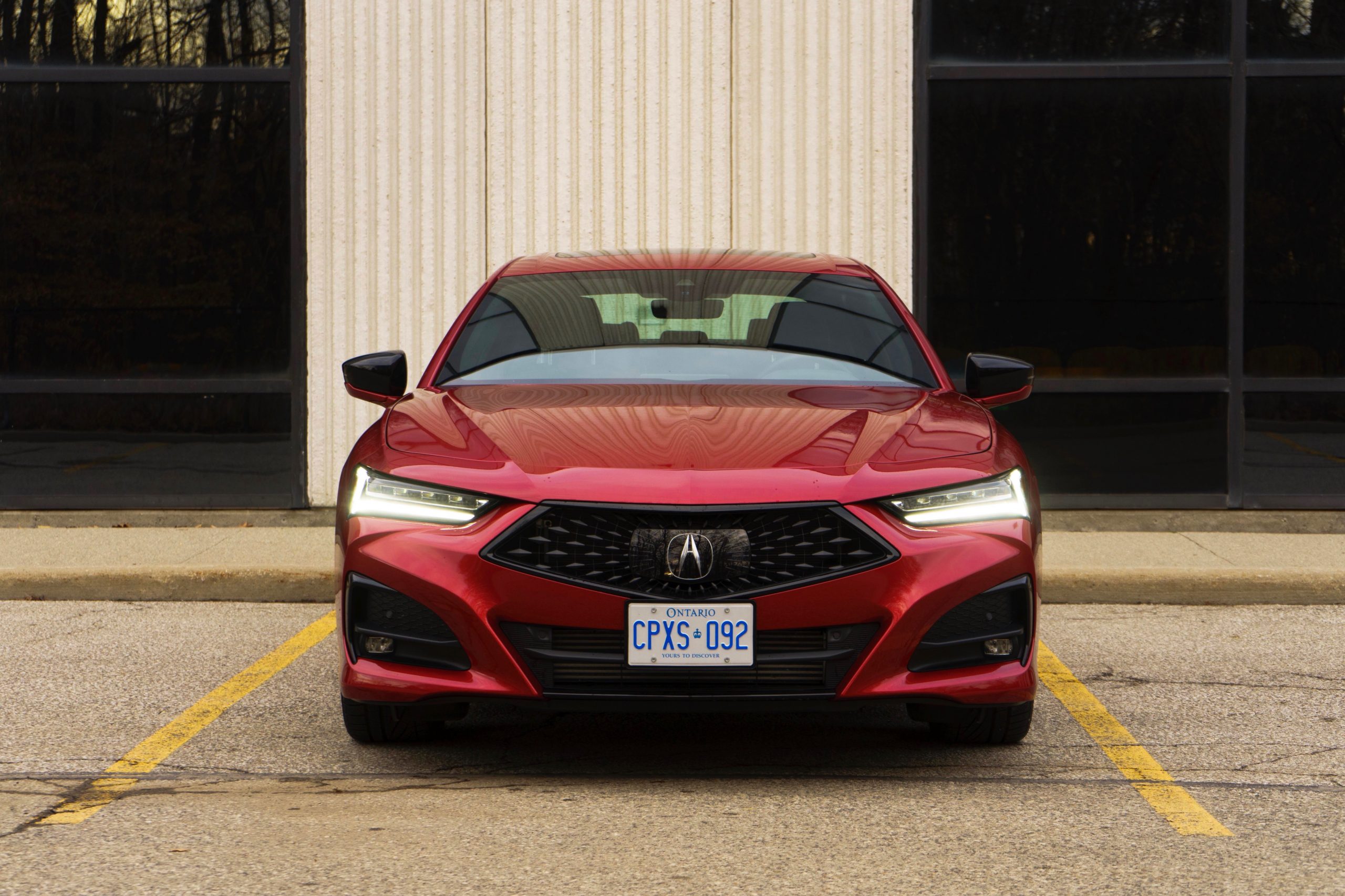 The big changes reveal themselves in the side profile where the stretched wheelbase and much longer dash-to-axle ratio make this appear more like a rear-wheel drive car—no mistake by any means. It gives the car a sporty and planted stance, closer in stature to the popular German sedans. The TLX looks muscular and athletic without having to resort to gimmicks, but for me, fails to capture all the magic of the Type-S concept.

Acura has brought back the double-wishbone suspension on the front axle, a sophisticated and more complex setup than the MacPherson struts used by nearly everyone else. It might be a costlier way to do things but the benefits are increased grip, better handling, and a more compliant ride.

Gone is the naturally aspirated 2.4-L 4-cylinder motor in the base model, replaced by a smaller 2.0-L turbocharged four-popper based on the one found in the racy Civic Type R. In this application it produces 270 hp and 280 lb-ft of torque, increases of 66 hp and a 98 lb-ft, respectively, over the outgoing unit. It feels suitably quick with excellent low-midrange punch. And this is just the base model. Arriving in spring the TLX Type-S will make its return with an all-new 3.0-L turbo V6 that will make over 350 hp. 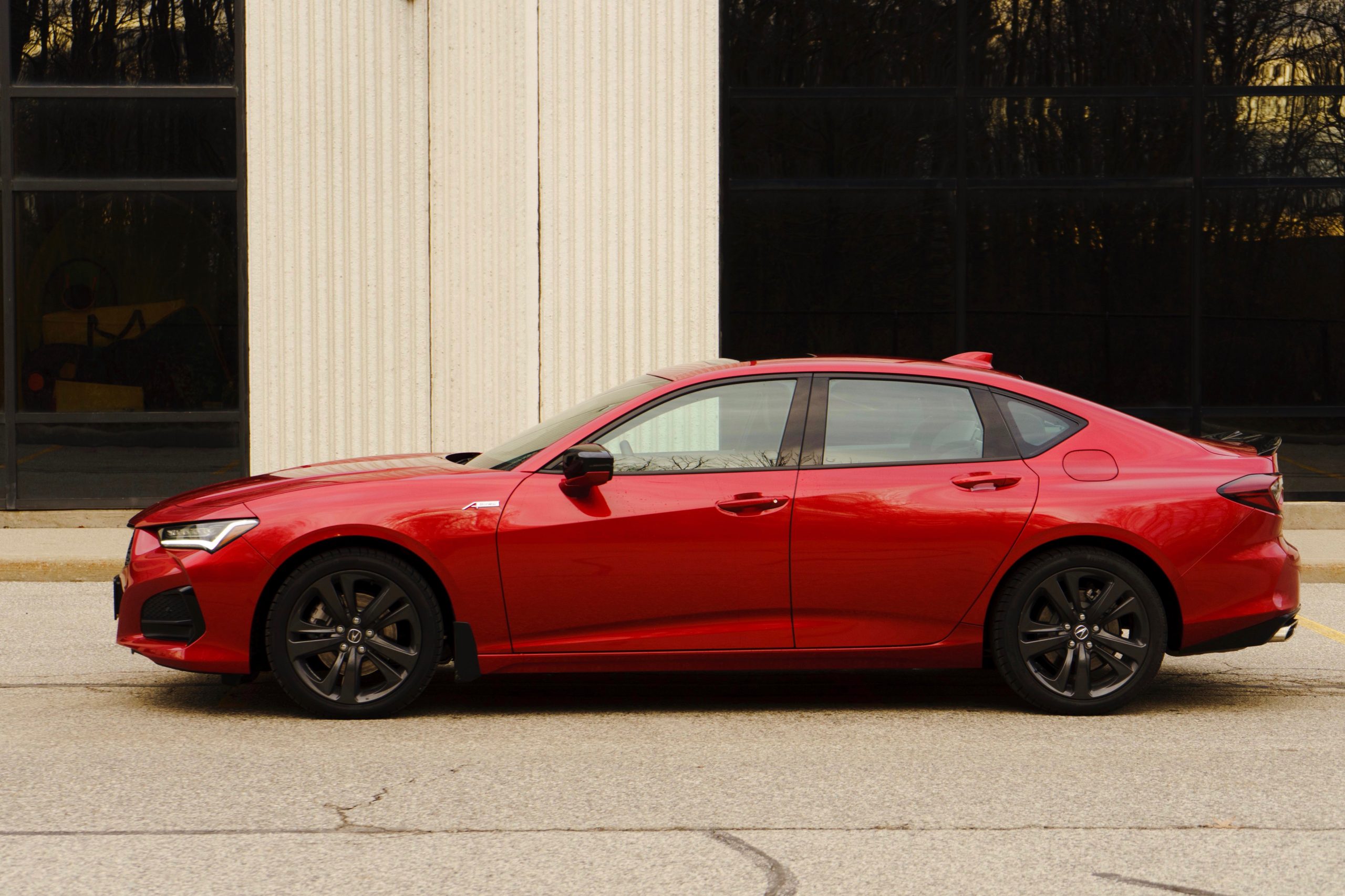 Acura has gone back and forth trying to find the right balance between screens and physical buttons, leading to some odd choices over the years but I think they’ve hit the nail on the head this time with the perfect amount of physical controls to do just about everything you need without having to resort to the infotainment.

When you do need to use the 10.2-inch screen, you’ll do it mainly through a touchpad equipped with what Acura calls “Absolute Position” mapping. My first go with it ended with frustration and quite a bit of profanity. Turns out I was doing it wrong, and once I figured out the correct way to use it, thanks to Youtube, it became much easier. The main problem here is that I’ve never had to reference a user manual or the Internet to figure out how to use a car’s infotainment system, as most are pretty intuitive. This one isn’t at first. 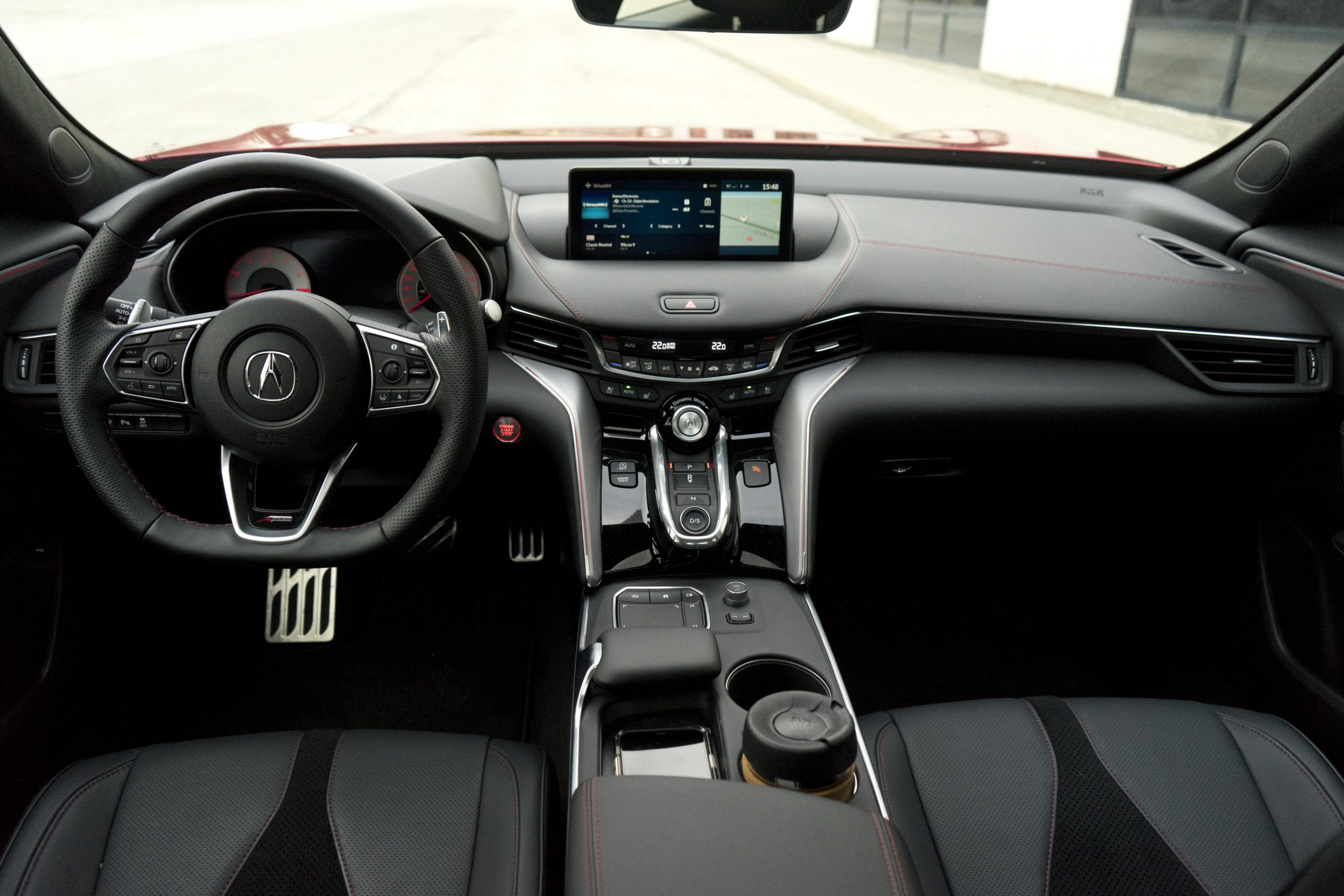 The biggest problem with the last TLX was that it was rather boring. A nicer way to describe it would be pleasant but that’s not really a compliment for a sports sedan. The new one does not have this problem.

From the second you plop down in the firm but very comfortable sport seat and grip the nicely textured flat-bottom steering wheel you can feel the improvements Acura has made without even starting the car.

As with any four-cylinder turbo motor, the sound is gruff and industrial and the fake exhaust noise isn’t much help. The torque peak comes at a lower rpm than it does in the Type R and it feels less peaky, but also a bit less exciting. No complaints about the power, though, as it feels faster than the outgoing V6 in nearly every metric. The 10-speed automatic also delivers fast, crisp shifts and does a great job of keeping you in the right gear at the right time.

Steering is quick, light, and reactive, exactly what you want in a sporty saloon. A large silver knob on the dashboard manipulates the drive modes that alter throttle response, steering feel, and other parameters including the adaptive dampers that weren’t equipped on this A-Spec trimmed car. Regardless, the ride with the standard suspension has that firm but still comfortable feel that delivers confidence behind the wheel without beating you up.

Push the TLX hard and the safety nannies don’t intrude as much anymore. The 4th-gen Super-Handling AWD system can send up to 70 percent of the power to the rear axle and 100 per cent of that can be sent to either rear wheel. The system does an excellent job of masking the TLX’s front-drive roots and makes it a fun car to drive. In many ways, this TLX reminds me of a BMW 3-series, and that’s certainly high praise. 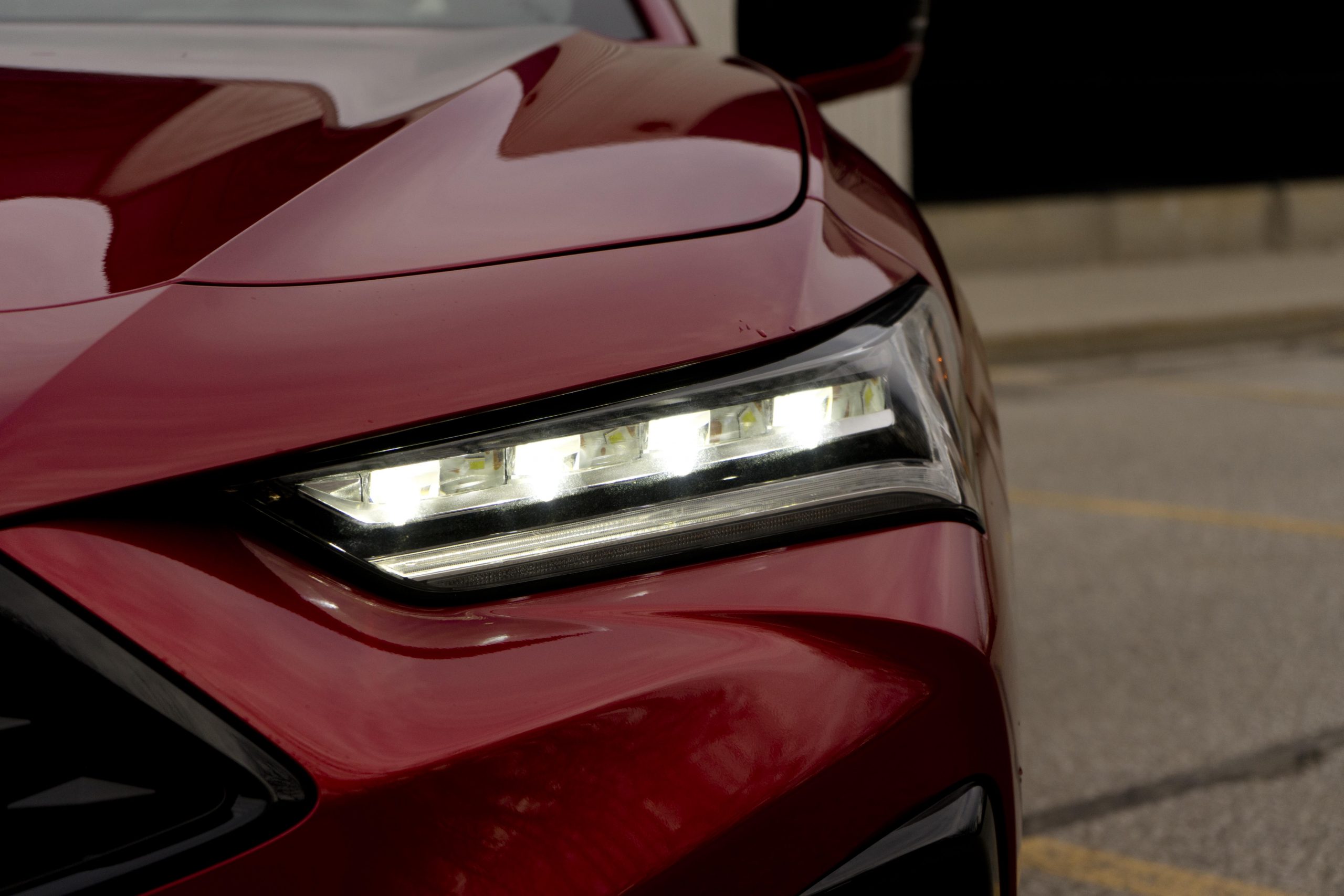 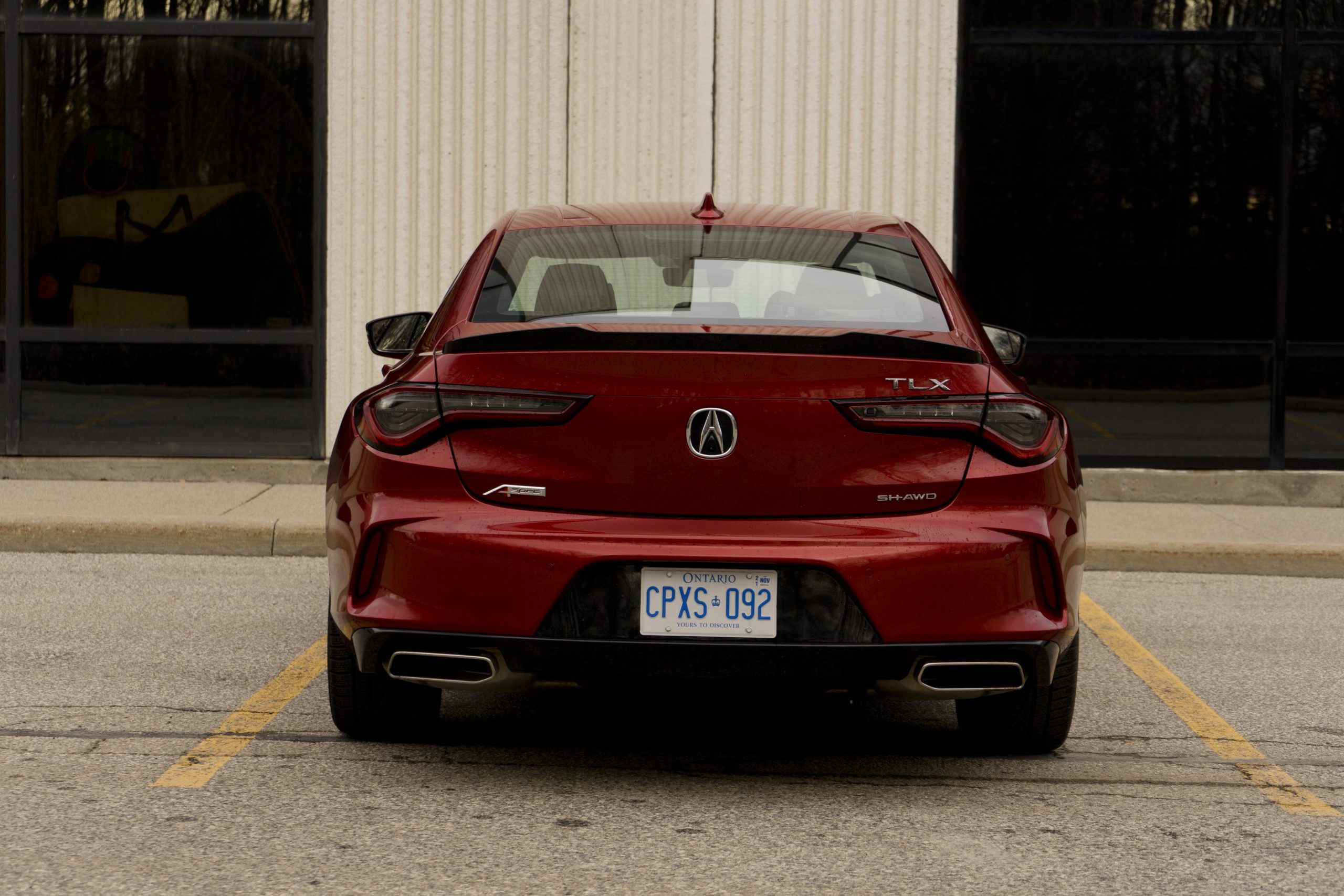 Starting at $44,605, the base TLX is rather well equipped with the SH-AWD system, drive mode selector, Acura Watch driver-assist tech, a 10.2-inch infotainment system, remote engine starter, and power heated front seats. As you walk up the trim ladder to the A-Spec seen here, it adds a phenomenal ELS 3D audio system, ventilated seats, a heated steering wheel, some sporty styling accents, and Shark Grey wheels. The top-spec Platinum Elite adds the adaptive dampers and heated rear seats along with a whole bunch of stuff that I don’t have the place here to list.

Acura has shown that it hasn’t forgotten how to make a good driver’s car, and they’re doing it at a price that undercuts major competitors like the BMW 3-Series and the Mercedes C-Class. It no longer feels like you’re compromising either and that might be Acura’s biggest win here. Bring on the Type-S! 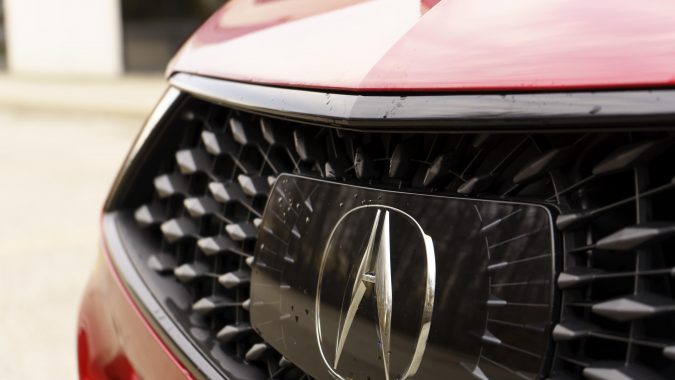 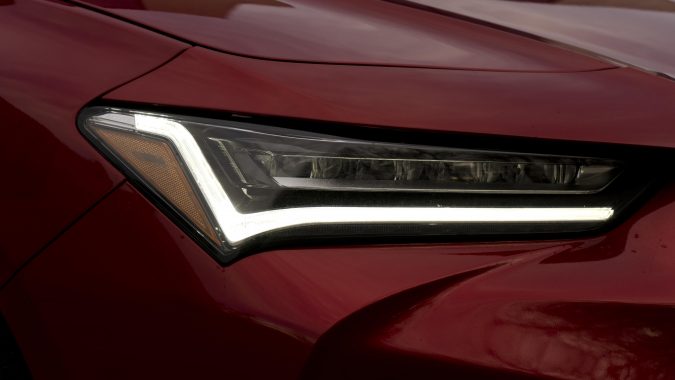 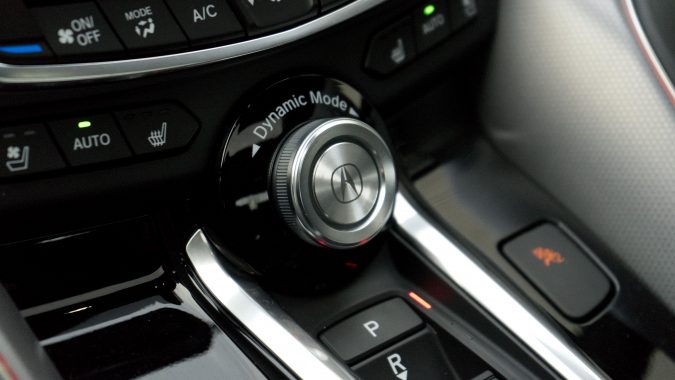 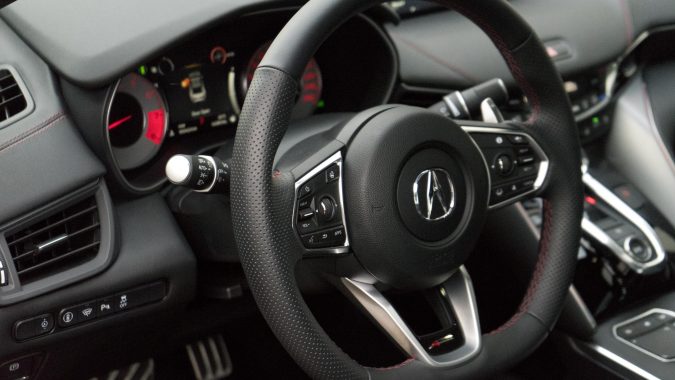 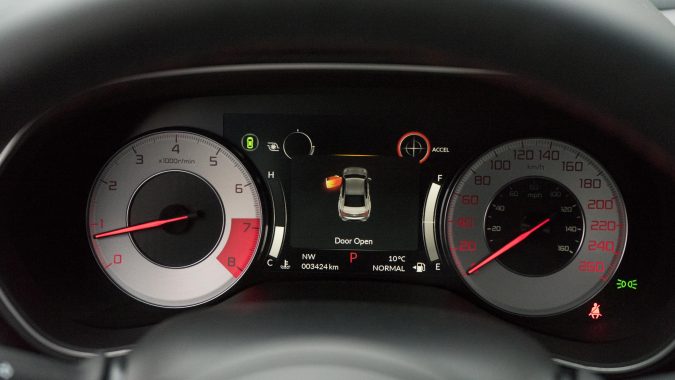 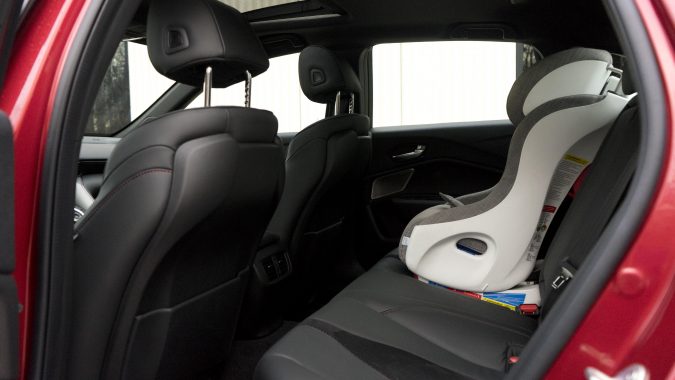