I’m going to guess that the first time I laid eyes on a Honda Civic was around 1974, when my Mom was in between marriages and I was seven. Dear old Mom was hanging around with a group of people and one of the guys bought a cool new Japanese car, called a Honda. I loved it, because it was little, like me. It was a car a little guy could relate to. I remember all of the adults calling it a motorcycle with doors.

As I grew older, naturally I was aware of the little cars, but didn’t really pay them too much attention until I saw them race in the Honda Michelin series in the early Eighties. As a young motorsport enthusiast, the sight of 30-plus bees buzzing angrily around Mosport was unforgettable.

Quick, tiny, fun and cheap, my opinion of the Civic was already rapidly forming. In the ensuing years, I would spend a lot of time in the repair side of the automotive industry (including some time on the desk at a Honda store) and that viewpoint would solidify.

Fast forward more than four decades (wait, that can’t be right, I’m not old!!!), and I just spent a week in the 2019 Honda Civic Si Coupe. I am having a hard time connecting my own feelings of what a Civic was to what a modern Civic is.

I’ll forgive you if you are having a tough time following along.

You see, of those four attributes my years of experience have attached to the Civic, two of them do not apply to my tester. To my miserly view, and I know many will disagree, $30K for a compact coupe is far from cheap. Likewise, the Civic Coupe is far from tiny. 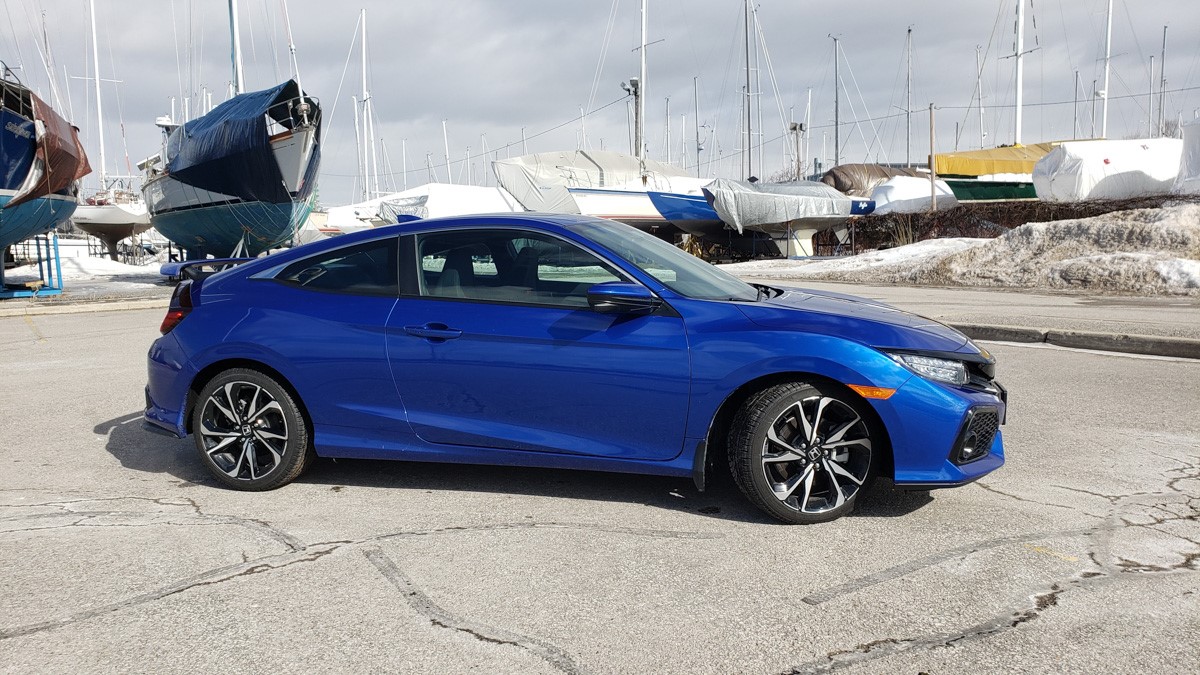 A lot has happened since 1974 and we hall have grown in stature. Some of us (meaning myself) have grown more than others. Cars have grown out of the need to make space for modern safety equipment. Society’s view of what is inexpensive has also changed.

Now that I have my own baggage out of the way, let’s have a look at the other two attributes: Quick and Fun.

The Civic Si Coupe not only ticks both of those options, it fills the boxes in completely with some scribbles outside the lines. This car is an absolute gas to drive! 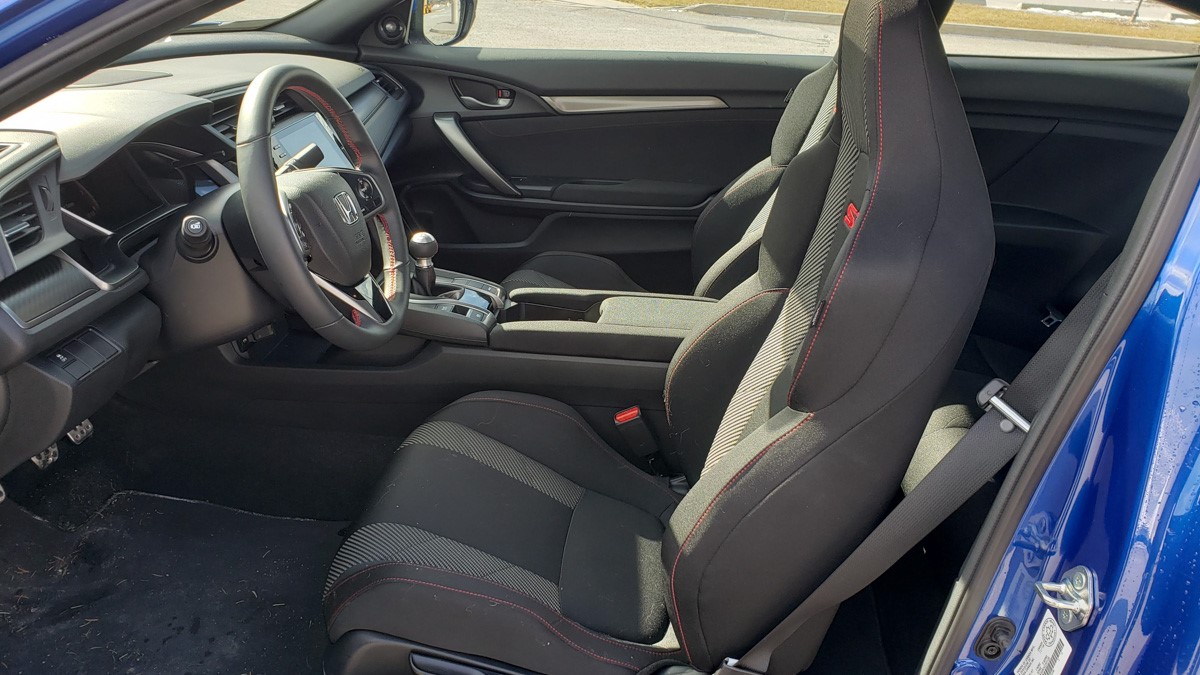 Another plus, the steering column is of the tilt and telescope variety. Sadly, Honda’s engineers have chosen to use a weird system where the adjuster is a handle far under the depths of the dashboard, which is pulled towards the driver to release. Those with certain body types, aka round, like me, may be forced to kneel outside the car to adjust the steering column. Not an ideal situation during a snow storm!

Once behind the wheel, the sporty looking cloth seats are firm yet comfortable, with enough support to be functional at a track day without being as aggressively bolstered as some of the sport seats on the market. Rear seat access is reasonably good for a small coupe and small adult passengers are not unduly cramped.

The cabin itself, and specifically the dashboard, feels decidedly more mature and upscale than one might expect in a car with a history of being cheap and fun. The coupe gives a nod to practicality, with a larger than expected trunk.

Over the years, one of the first modifications that enthusiastic Civic owners have made is the installation of a short shifter, designed to shorten the length of travel taken to shift gears. When setting out the first time, I immediately noticed that the shifter travel is tuner car short, with crisp gear engagement. The clutch is light and easy to operate, which should make the car more approachable for newer drivers. 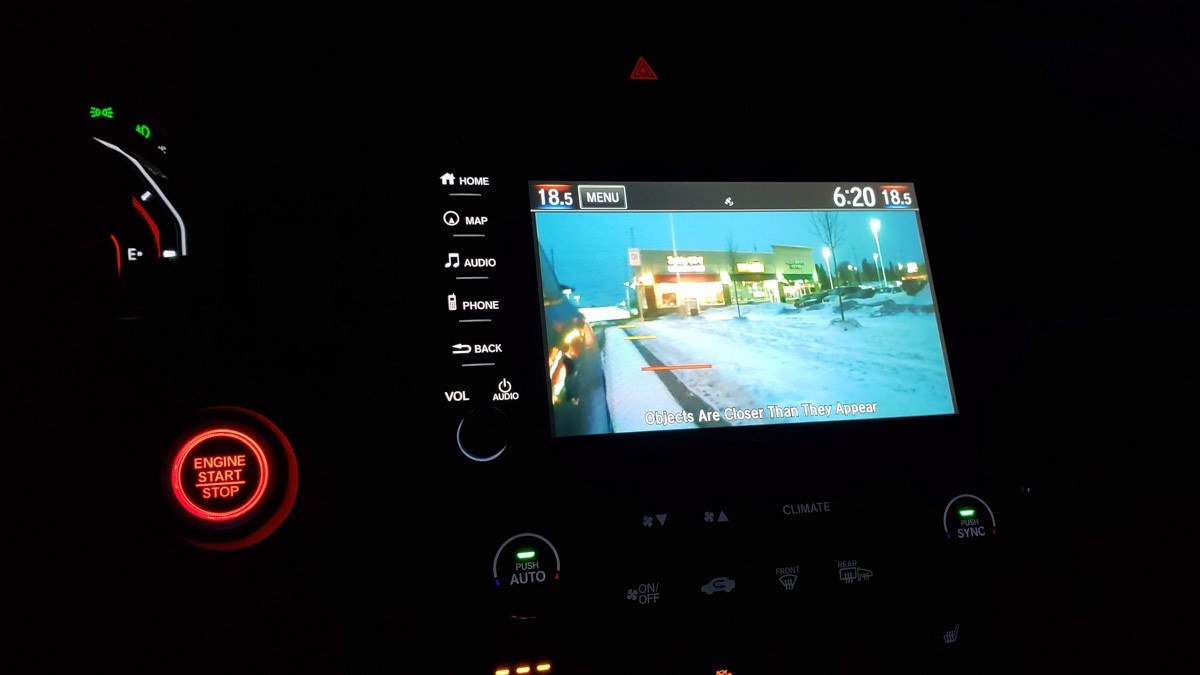 Powered by a turbo fed 1.5L four cylinder that turns out 205 horsepower and 192 lb-ft of torque, mated to a six speed transaxle, the little coupe moves out briskly when asked, ensuring a fun driving experience. Bear in mind that the days of “got VTEC bro” are gone, so there is no need for the crazy high revs that used to be a sporty Honda signature. Instead, expect a strong pull at low rpm, with no fuss on acceleration. Likewise, Honda has done a great job eliminating torque steer, for the most part, which is always a consideration in front wheel drive cars with this level of power.

A sport mode button tightens up suspension, steering, and throttle systems for a more sporting driving experience. While it does all of these things, it feels a bit anticlimactic without any change to the exhaust note. A bit more volume would be nice.

Beyond performance, the thing that modern consumers want most in a car is high tech options, which are typically assembled within the in-dash infotainment system. While all of the usual connectivity items are there, accessed through a 7” digital display, the execution is less than optimal. With only a volume knob and a few poorly marked buttons, any changes need to take place using the touch screen, which actually takes the driver’s focus away from the road. Even changing channels is best done while parked. This has been addressed in the 2019 Accord I am driving this week, which has more useable buttons and an actual tuning knob.

I am typically not a huge fan of driver’s aids, as I feel that while improving road safety on the one hand, they are also contributing to the lack of overall driver skill, as drivers are becoming lazy. That being said, the Civic includes one driver aid that I think should be standard equipment on all cars. A wide angle camera is mounted in the right side mirror, the view from which is displayed on that infotainment monitor when the right turn signal is engaged. Not only does it eliminate any blind spot, but it provides a view of pedestrians on a street corner. 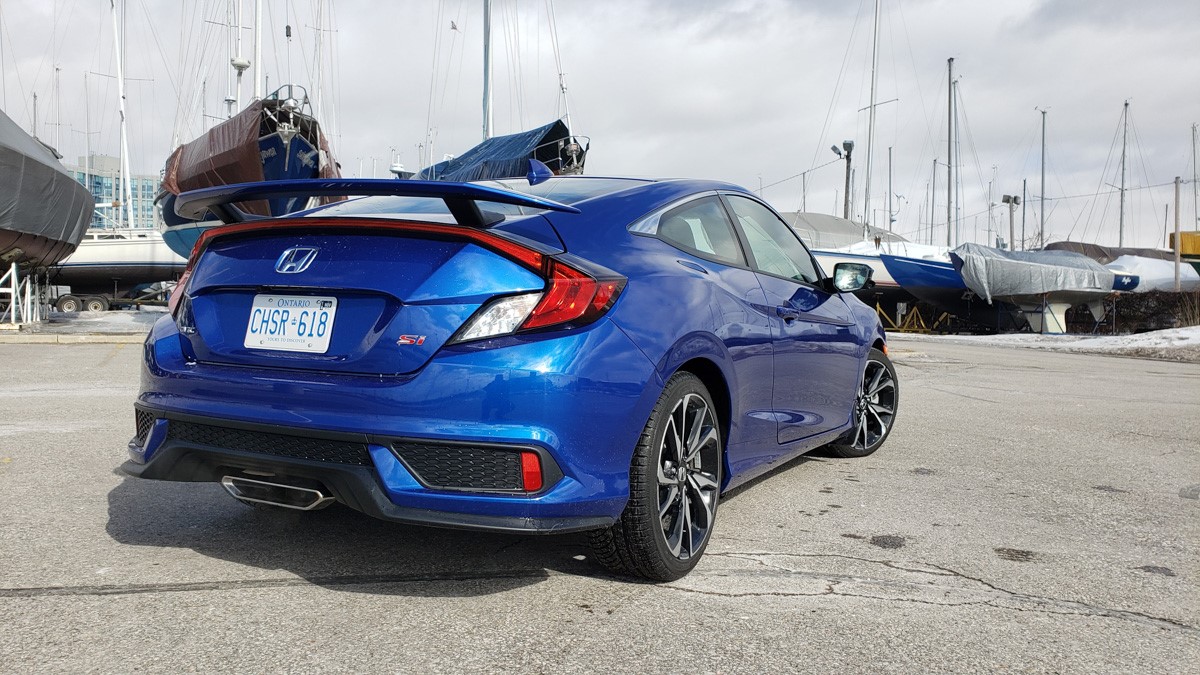 The four door version of the current generation Civic has proven to be very polarizing, as people tend to either love the sharp, futuristic lines or hate them. Fortunately, the coupe has slightly more conservative styling, particularly at the aft end, which seems to please everyone I spoke with about the car. The only negative feedback I heard regarding styling was that the uprights supporting the rear spoiler look like an afterthought.

During our week with the Civic Si, we saw fuel economy crushing cold temperatures and we drove it briskly most of the time and yet it still turned in a respectable 8.6 L/100 KM in combined city & highway driving.

Don’t let my own perceptions of size and price mislead you. It should come as no surprise that the 2019 Civic Si Coupe is every bit a Honda and that includes a healthy combination of fun, function and even value. Couple all of that with the knowledge that the Civic is built right here in Canada and this sporty two door is a difficult package to beat. 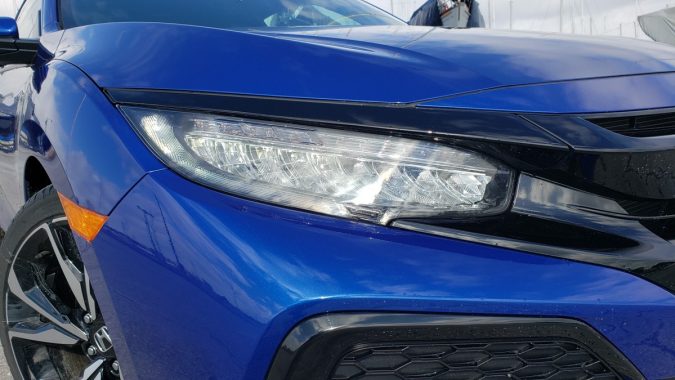 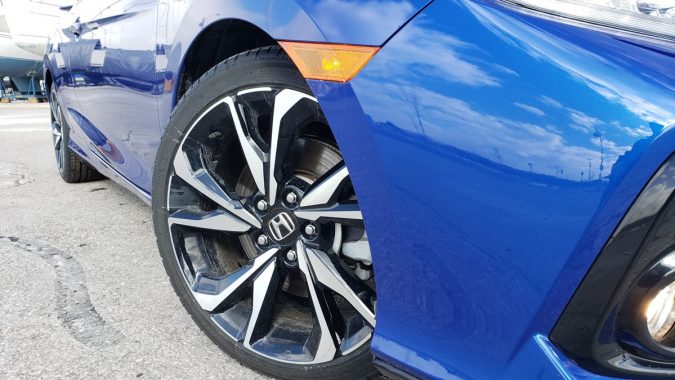 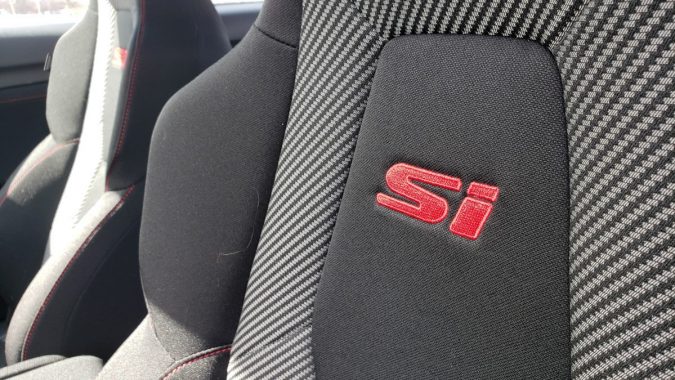 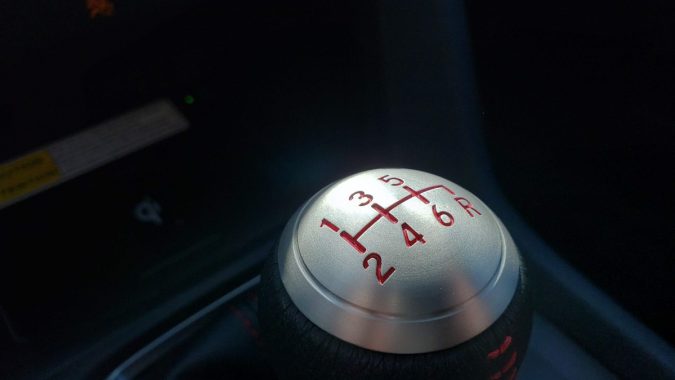 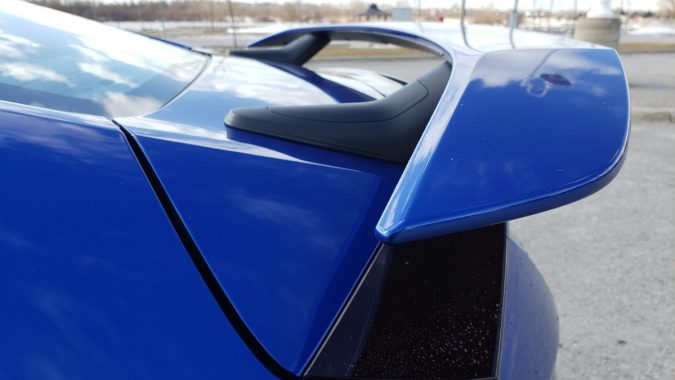 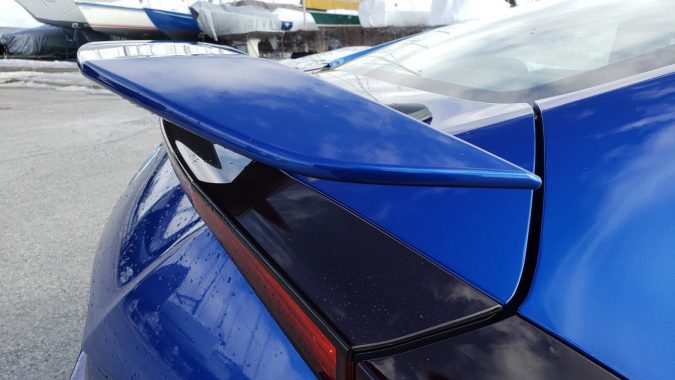 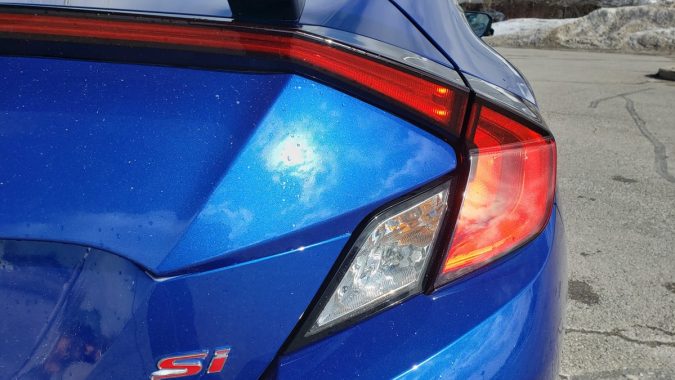 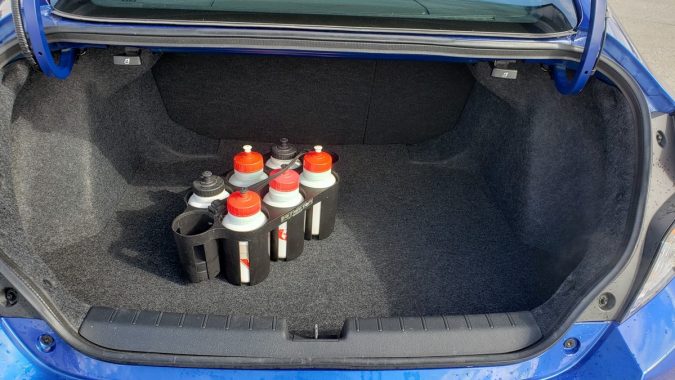 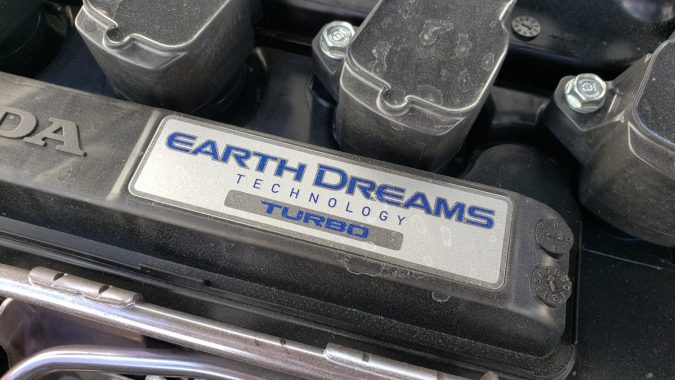 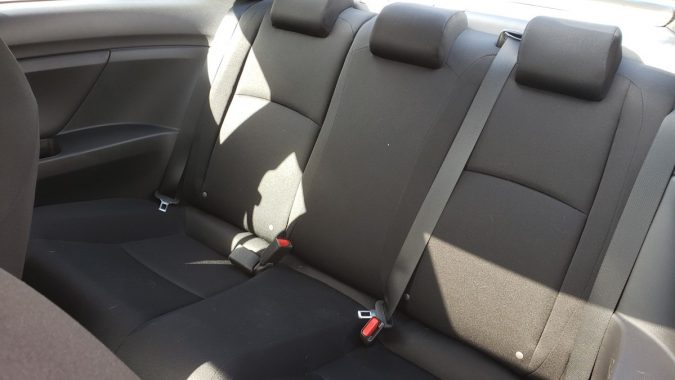 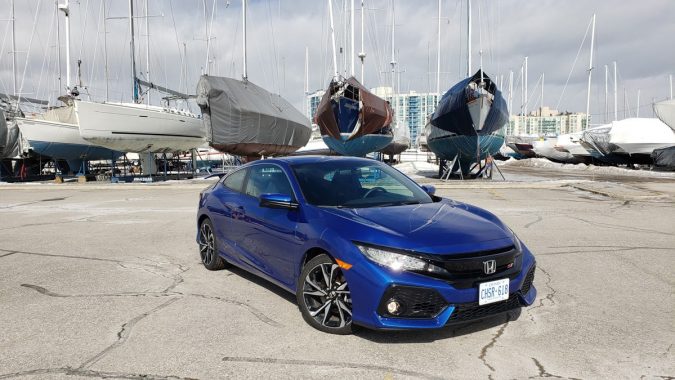 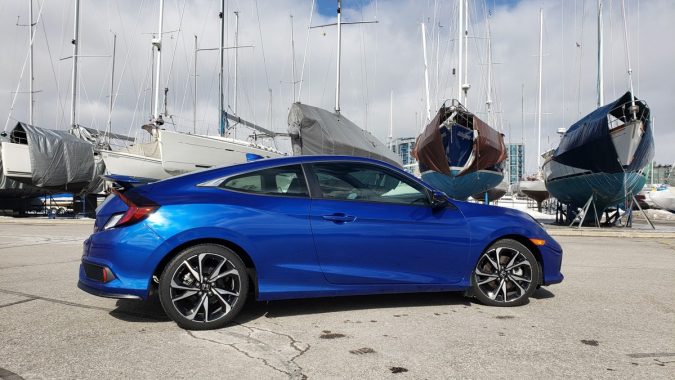 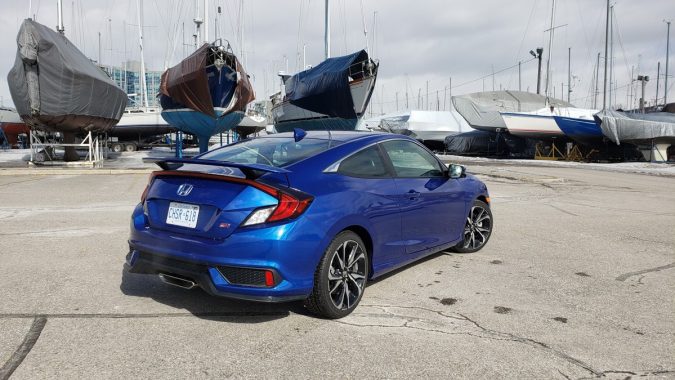