Nissan’s Juke managed a pair of impressive feats. It was one of the very first in the modern sub-sub-compact segment that has taken off in the last few years. The other is that it managed to be successful despite being one of the strangest looking cars to hit the market in the last couple of decades. With the Kicks, Nissan is entering a new nameplate into an already crowded market. It’s also a vehicle that lacks much of the uniquely funky visual appeal of its predecessor.

So Nissan’s facing a big challenge with its tiniest crossover. So is this one a Kicks when it’s up or will buyers Kicks it when it’s down?

If you’re picturing the Kicks, you’re probably thinking of a tiny crossover that looks like a scaled-down version of the Qashqai and Rogue, and wondering why Nissan is cluttering its lineup at the bottom of the crossover pile. But it doesn’t look much like the Qashqai in person. It’s not the bug-eyes of the Juke, either, but this little vehicle manages to look sharp. It’s as stylish as the similarly-sized Mazda CX-3, but where that’s a crossover of curves the Kicks is loaded with creases and sharp lines. Plus that definitely cool floating roof can be painted in a contrasting colour for extra effect. So what if it’s not bold like the Juke or plastic-clad like the Kona, this is a good looking baby-ute.

The inside, though, is a little more sedate. My SR trim tester had some nice touches like the contrast stitching on the dash and faux-leather seats, and the floating 7.0-inch touchscreen with available Apple Carplay and Android Auto, but the upper door panels are broad expanses of bland black plastic, as is the top of the dash. A little more of the Juke’s flair in the interior would really warm things up in here. 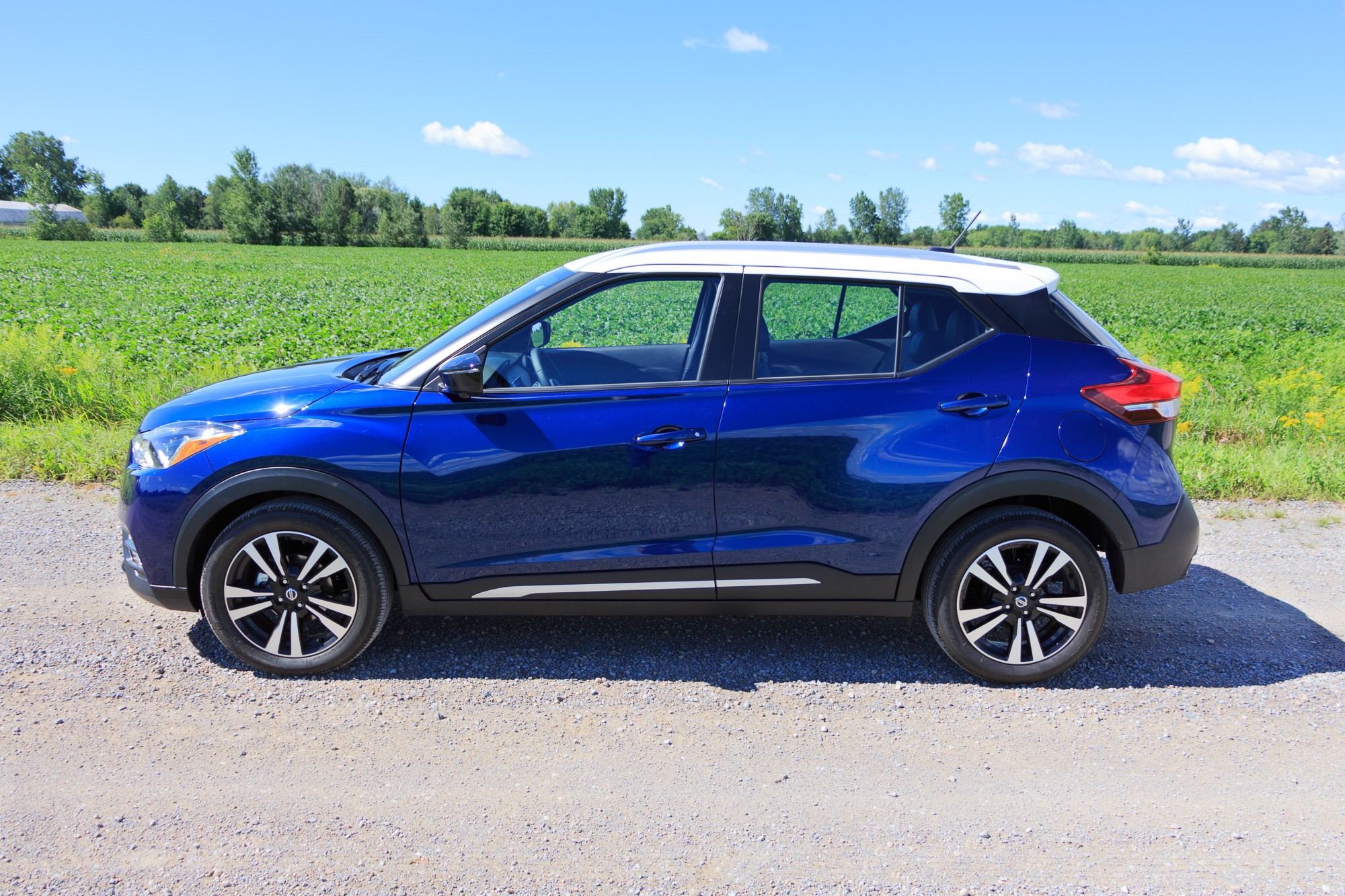 It does offer a new and unique audio experience. On the SR, a new Bose Personal Plus sound system is offered. It uses eight speakers including a pair mounted in the driver’s headrest. The UltraNearfield offers an interesting twist on your usual tunes, making it sound like the singer is surrounding your ears. Back seat passengers might not get that same audio experience, but they don’t exactly miss out either. There’s a USB port in the dash, but there are also two USB-ports that are easily reached for anyone sitting in the back.

It might be plain, but it’s a big space. The Kicks is within an inch in width and length of the CX-3, though it is 76 mm narrower and 84 mm shorter than the Qashqai. Despite that, it offers up more headroom front and rear than either of those. The spec sheet says it has less legroom than the CX-3 in the back, but it feels larger. The 81 mm of extra shoulder space let you shift around to better fit back there, too. Even with four adults on board, the Kicks doesn’t feel cramped, which is a feat in this size class. Same goes in the back, where Nissan has chosen to drop the rear floor instead of trading a flat space with the seats folded for less room. The 716 L of cargo space puts it at the top of the segment. It more than doubles the CX-3 and tops its bigger brother with a Q by 68 L.

The Kicks is booted forward by a 1.6L four that produces 125 hp and 115 lb-ft of torque. It’s average power for the class, but this is a light vehicle. You won’t be beating much in a drag race, but it’s enough power to move this just over 1,200 kg crossover with enough verve for most driving. Think on-ramps and merging, and it’s just fine. The only transmission offered is Nissan’s Xtronic CVT. I’m not normally a fan of the CVT, but this one is designed and calibrated to operate enough like a conventional automatic that I had to check the spec sheet to make sure what was under there. It’s smooth and responsive but avoids the elastic-band feeling and drone that’s the curse of the CVT.

The Kicks is front-drive only, but in a small crossover like this, that doesn’t seem like an issue. Adding it would raise the cost to the point that it stepped on the Qashqai, and the other subcompacts that offer the feature are knocking on $30,000. Putting this crossover in that price bracket might not be quite as appealing. In any case, fitting those 17-inch alloys with a good set of winter tires will get most people to and fro in the worst winter has to offer. If you’re facing conditions where you absolutely need to drive all four in the winter, you’re probably looking at something bigger and beefier than this segment in the first place. 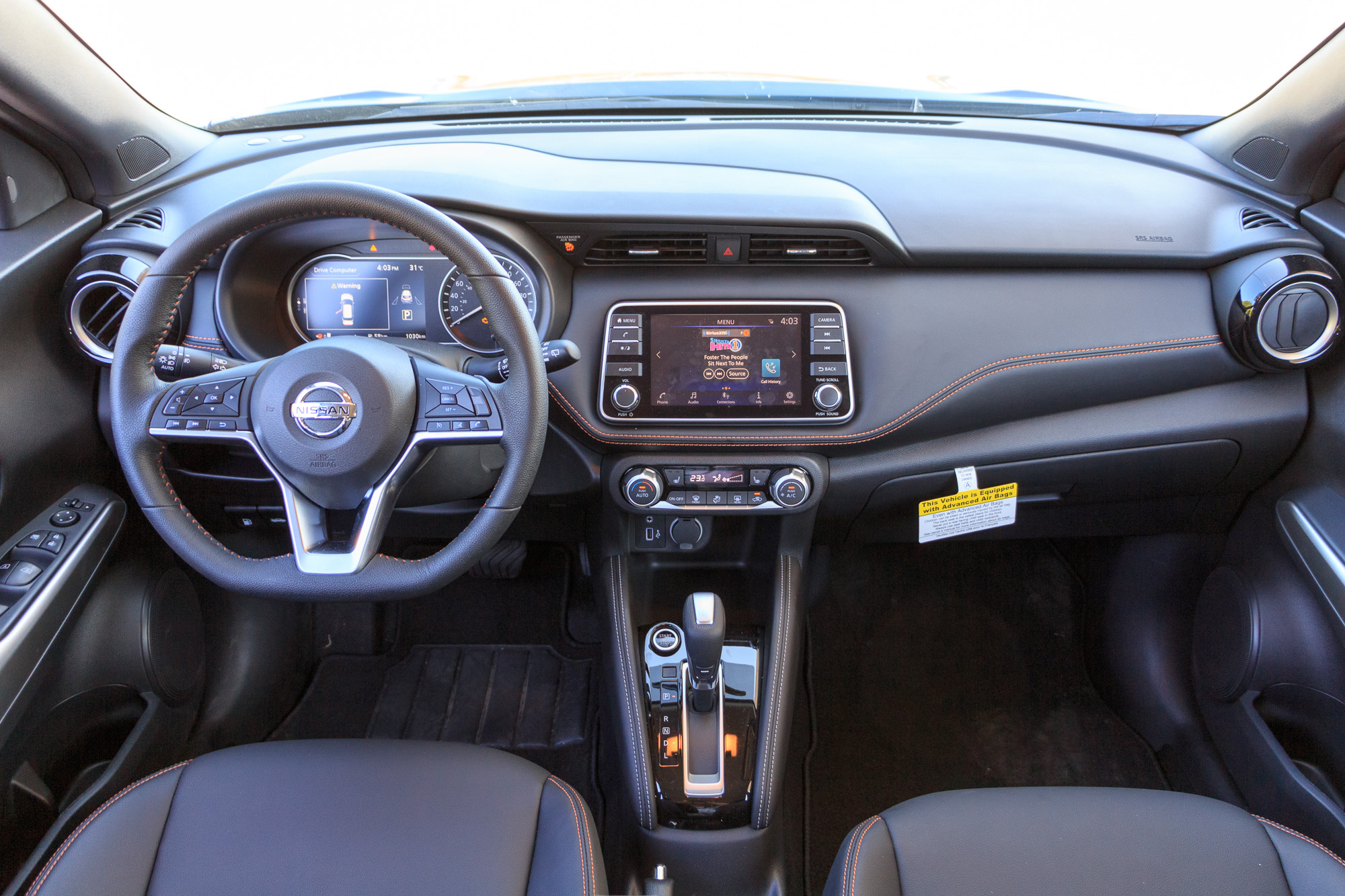 Fuel economy in the Kicks is rated for 7.7 L/100 km city, 6.6 highway. My drive saw me spend about half my time idling through the city in traffic and I still got in the mid sixes.

Forget the driven wheels. One of the perks of the small SUV is manoeuvrability, and the Kicks doesn’t disappoint. It’s nimble and tossable, with an impressively small turning circle. Try to throw it around a sharp bumpy bend and the short wheelbase starts to show and the Kicks can get a little unsettled. If you’re looking to throw it into a quick U-turn, or dive into a parking space at the mall, this delivers. The tiny exterior size helps you to fit it into smaller spaces, too.

That easy parking is helped by what might be the biggest surprise in the segment. A Surround View camera. In a vehicle that stickers for under $23k. It’s not really needed, thanks to good outward visibility, but it’s sure nice to have. And nothing else in this price point offers it. On top of the surround view camera, the Kicks offers a wide range of active safety features. Intelligent emergency braking, which detects and attempts to stop for objects like other cars and pedestrians is standard on even the base trim. This SR adds blind spot warnings and rear cross-traffic alerts.

The Kicks might not be as stylish as the Juke it replaces, but it’s a handsome small crossover that boasts an impressive powertrain, loads of interior space, and some surprising features for this price bracket. Like an old pair of sneakers, this is comfortable, roomy, and relaxed. With a little bit of style. 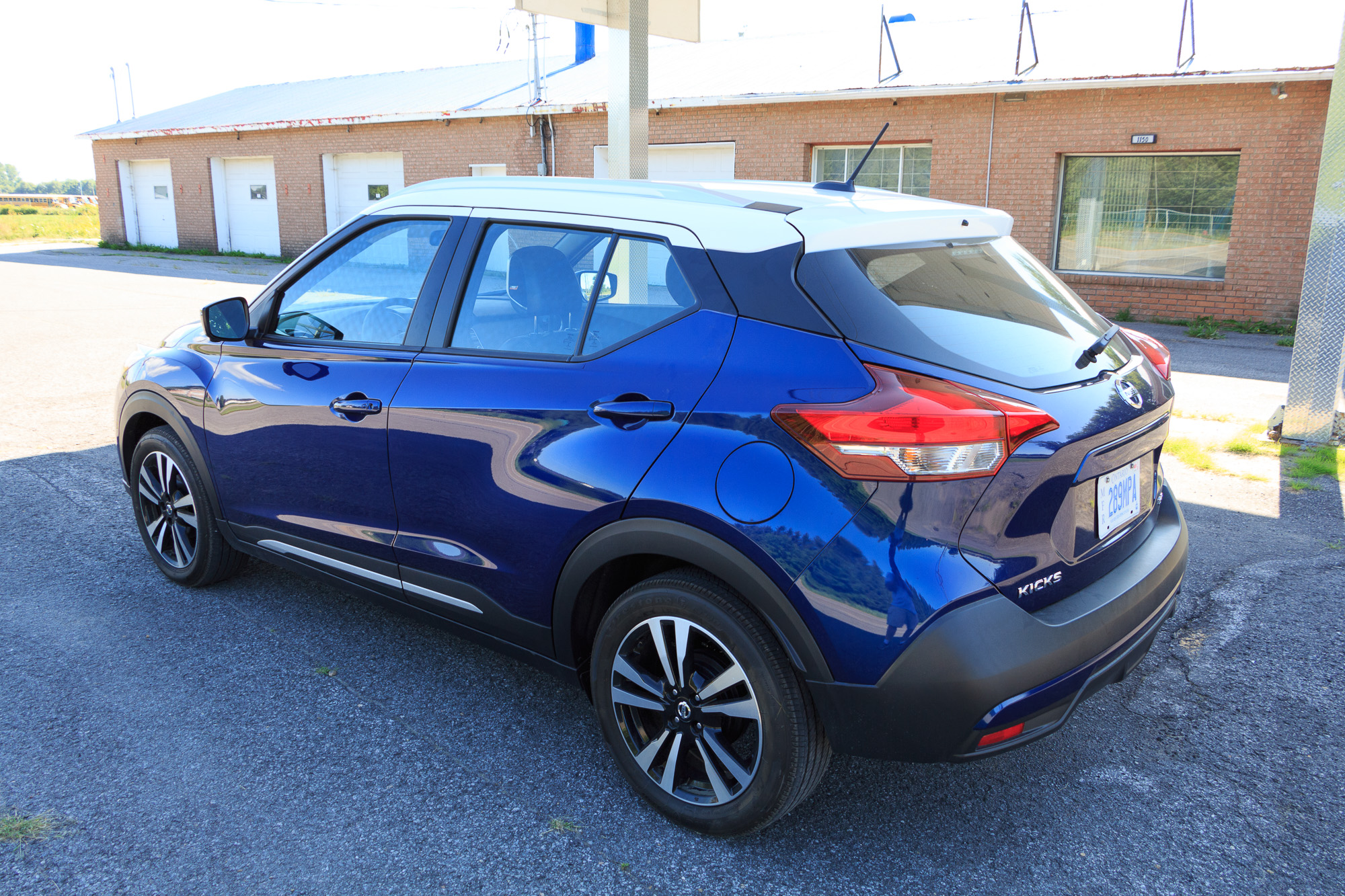 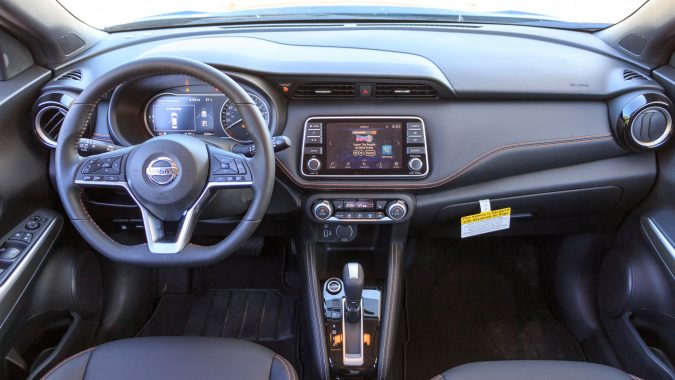 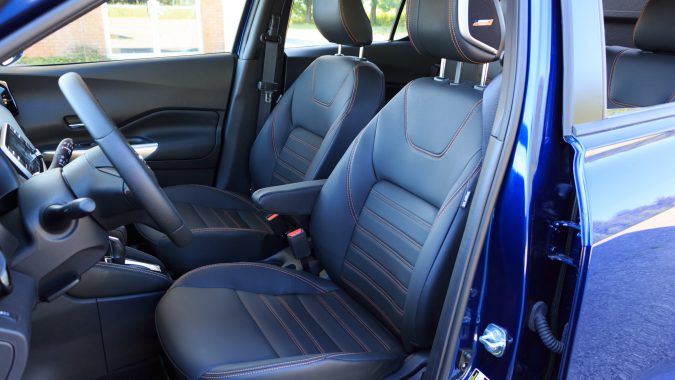 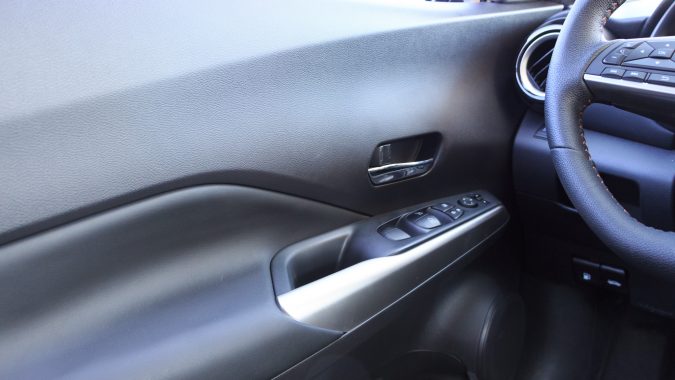 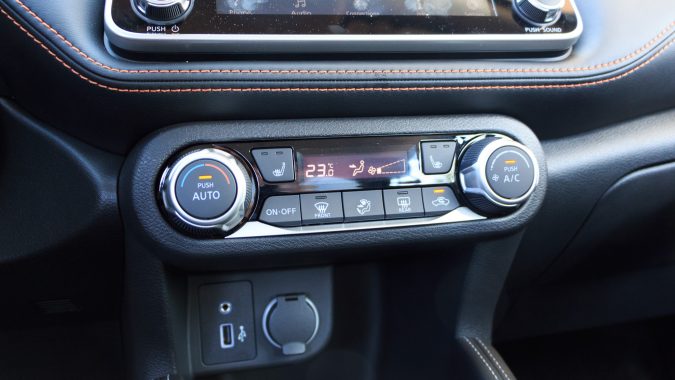 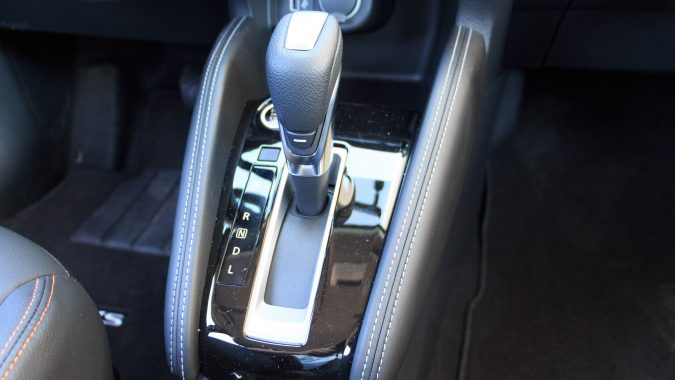 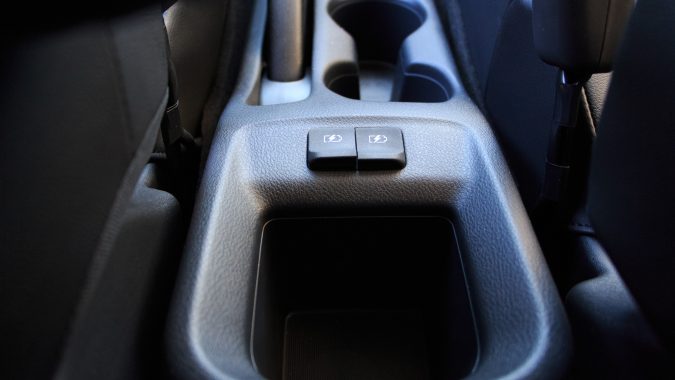 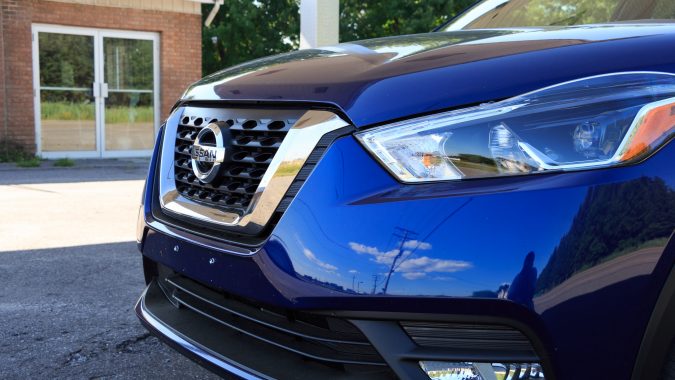 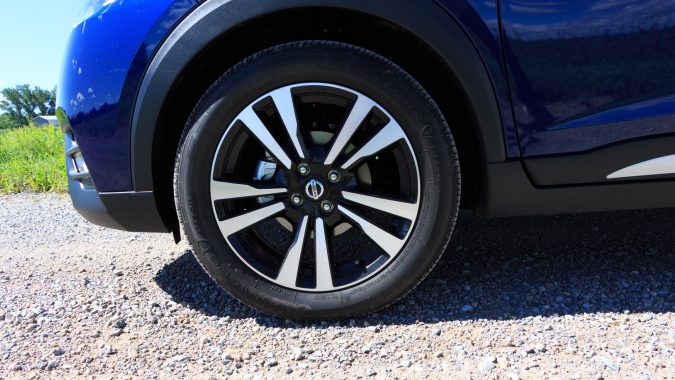 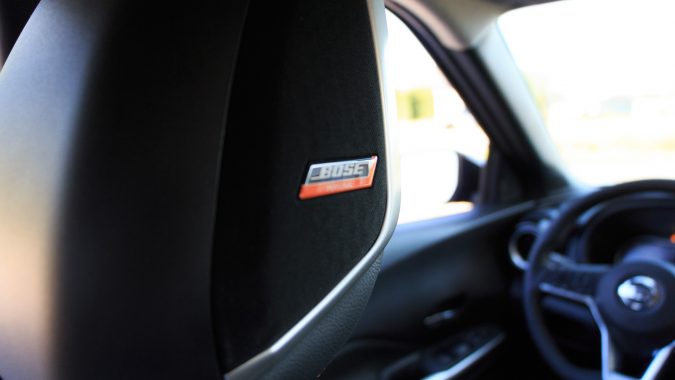 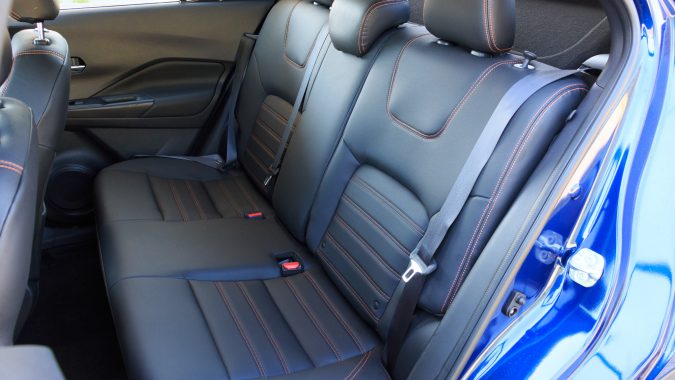 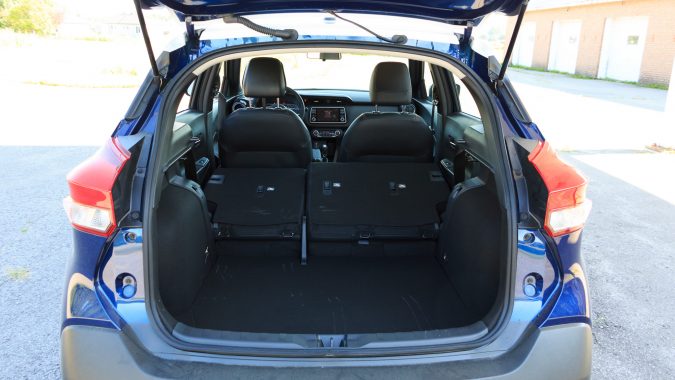 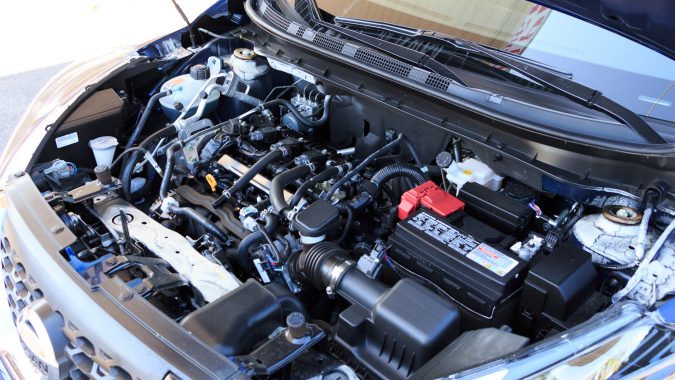 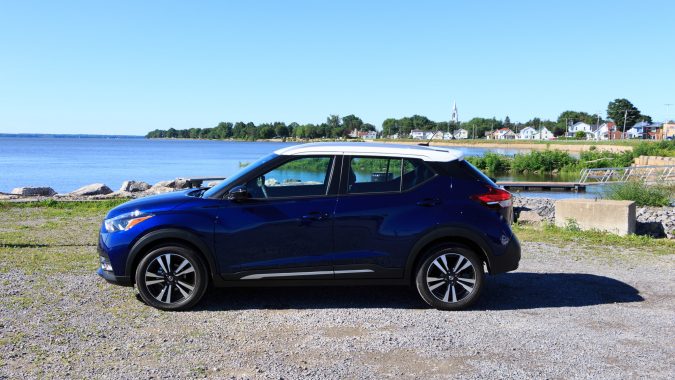 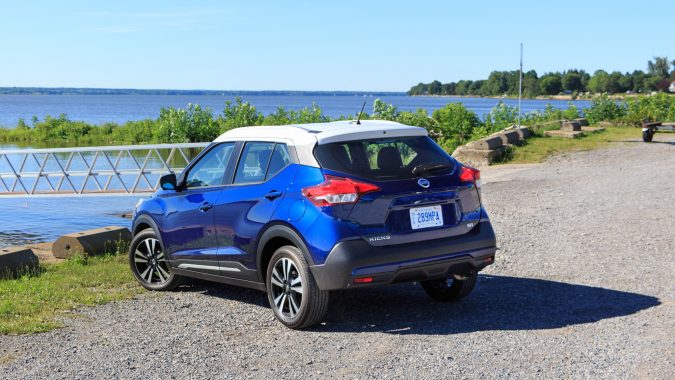