Unless you’ve been living under an especially virulent rock, it’ll not have escaped your notice that the Ford Motor Company is getting out of the car business. Not the automotive business, mind you, that would be apocalyptic. No, the powers that be at the Glass House have decided not to bother with the minutiae of building sedans and hatchbacks.

Except for the Mustang, of course. Binning that nameplate would be akin to punching your own sainted mother, given that the pony car has been part of the Blue Oval DNA since 1964. With this 2018 model, endowed with a mighty V8 engine and Performance Pack goodies, it reminds us– if just for an instant – that Ford, when it wants to, can still make one hell of a great car.

Let’s start with the business end of this sinewy coupe, one whose hood and fenders bulge like the sleeves on John Cena’s t-shirt. Under the hood is Ford’s mighty Coyote V8, displacing 5.0L just like Henry Ford and Vanilla Ice intended. Tuned here to deliver a tire-shredding 460 horsepower and 420lb-ft of torque, this eight-cylinder brute will rattle your neighbour’s windows on a cold morning. Gord may have mentioned this to me later that evening. 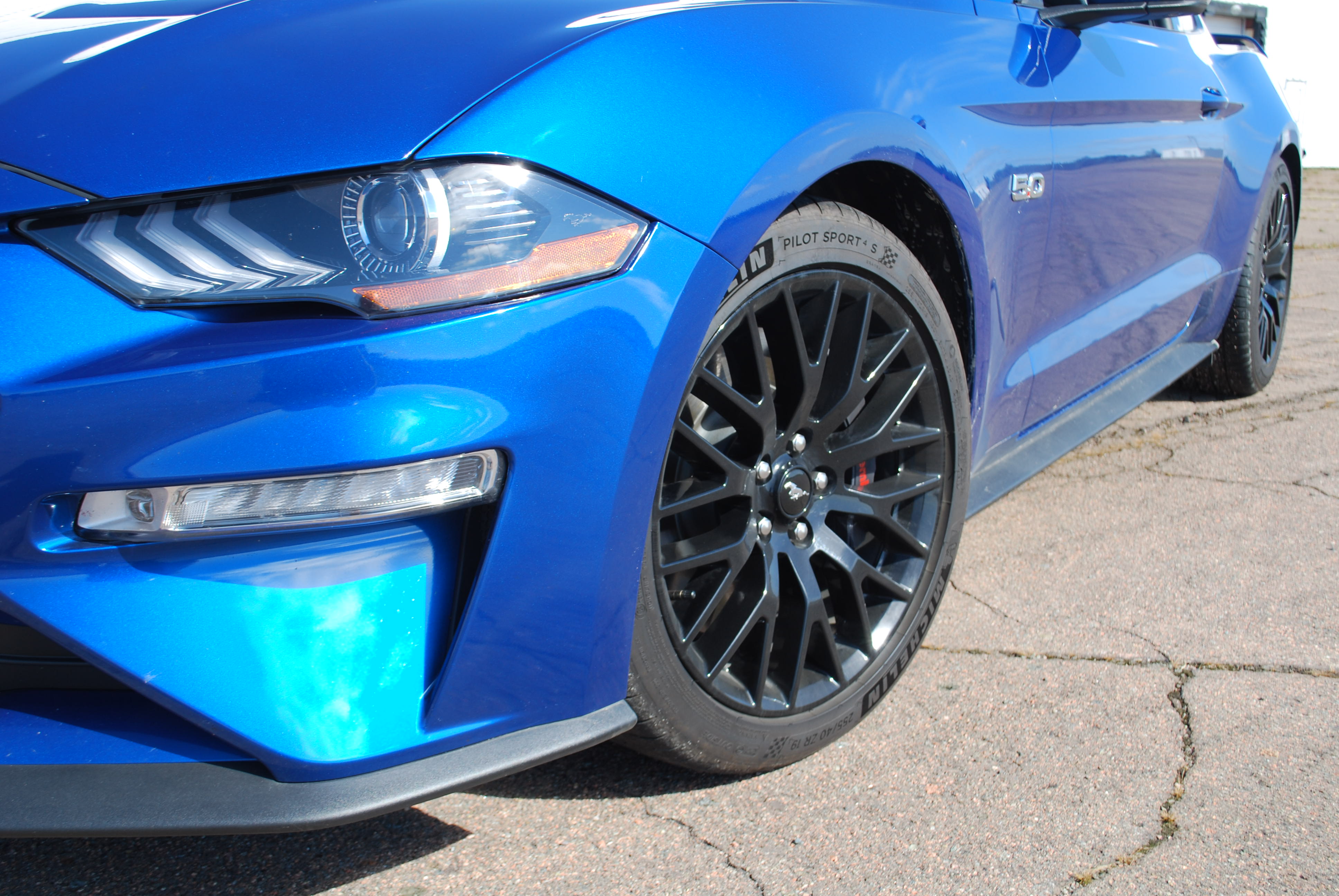 Good thing there’s a so-called “Good Neighbour” mode. Buried deep in the Mustang’s digital menu is the ability to set the V8 to light at reduced volume during certain hours of the day. Being able to boast of that feature alone is worth the cash. This $1000 performance exhaust option is, far and away, the most testosterone-laden engine note these jaundiced ears have ever heard. It works like a combination of raw steaks, ghost pepper chillies, bungee jumping, and kickboxing all at once. It is glorious. I may have made a stop sign pregnant while driving past it.

Yank the tail of this Coyote and you’ll be rewarded with a howl from the 19-inch summer rubber, sized 255/40 in the front and 275/40 in the rear. In fact, Ford has built a Line Lock mode right into the digital performance menu, an option which allows the rear tires to freewheel while a mighty set of Brembo six-pot brakes clamp tightly on the front stoppers. This, predictably, permits burnouts of epic proportions. This is not approved by Greenpeace.

To begin the festivities, punch the Mustang button on the steering wheel (and you had better punch it, as this is not a car in which to ‘press’ or ‘touch’ buttons) and cycle to the appropriate menu screen. Stomp on the brake pedal with the same amount of vigor that a vintner stomps late harvest Gewürztraminers. Then, jab the steering wheel’s OK button to confirm you want to roast the baloneys.

If you’ve done it right, a fifteen second countdown will appear on the dashboard, telling the driver just how much time they have left to burn rubber. Flatten the gas pedal and watch the scenery disappear in a fine Michelin Pilot Sport 4S haze. Torstar lawyers are furiously gesturing at me to remind you all that this should only be performed on a closed course.

Our tester was equipped with Ford’s optional Recaro leather seats, a wanton expenditure of $1800. These manually-adjusted thrones hug you tighter than a naughty co-ed, which is at least good for those who will be attacking a race track with vigor. For the rest of us, skip them and save your cash. Leave the Safe & Smart package on the factory floor as well; $1500 for adaptive cruise control and a few other safety nannies is a waste of money in this machine.

What is emphatically not a waste of money is the $3700 GT Performance Package, an option group that should be selected with the same speed that Khabib Nurmagomedov scaled the cage at UFC 229. In addition to imbuing the car with the 19-inch meats mentioned above, it also includes a 3.55 limited-slip axle (3.73s for those choosing the stickshift), a natty decklid spoiler that could double as a surfboard, those Brembos, and unique chassis tuning. A neat-o gauge package rounds out the deal.

Speaking of gauges, the unimaginatively-titled 401A package merits consideration if you can swing the extra $2000. Mundane items like a heated steering wheel and satnav are part of the deal but its real rockstar-level feature is the 12-inch LCD instrument cluster that could easily have come from Ingolstadt. Configurable in several distinct formats, this screen lights up and dances like the Las Vegas strip after dark. Your author preferred the snazzy ribbon-style tachometer which danced horizontally like a possessed movie marquee. 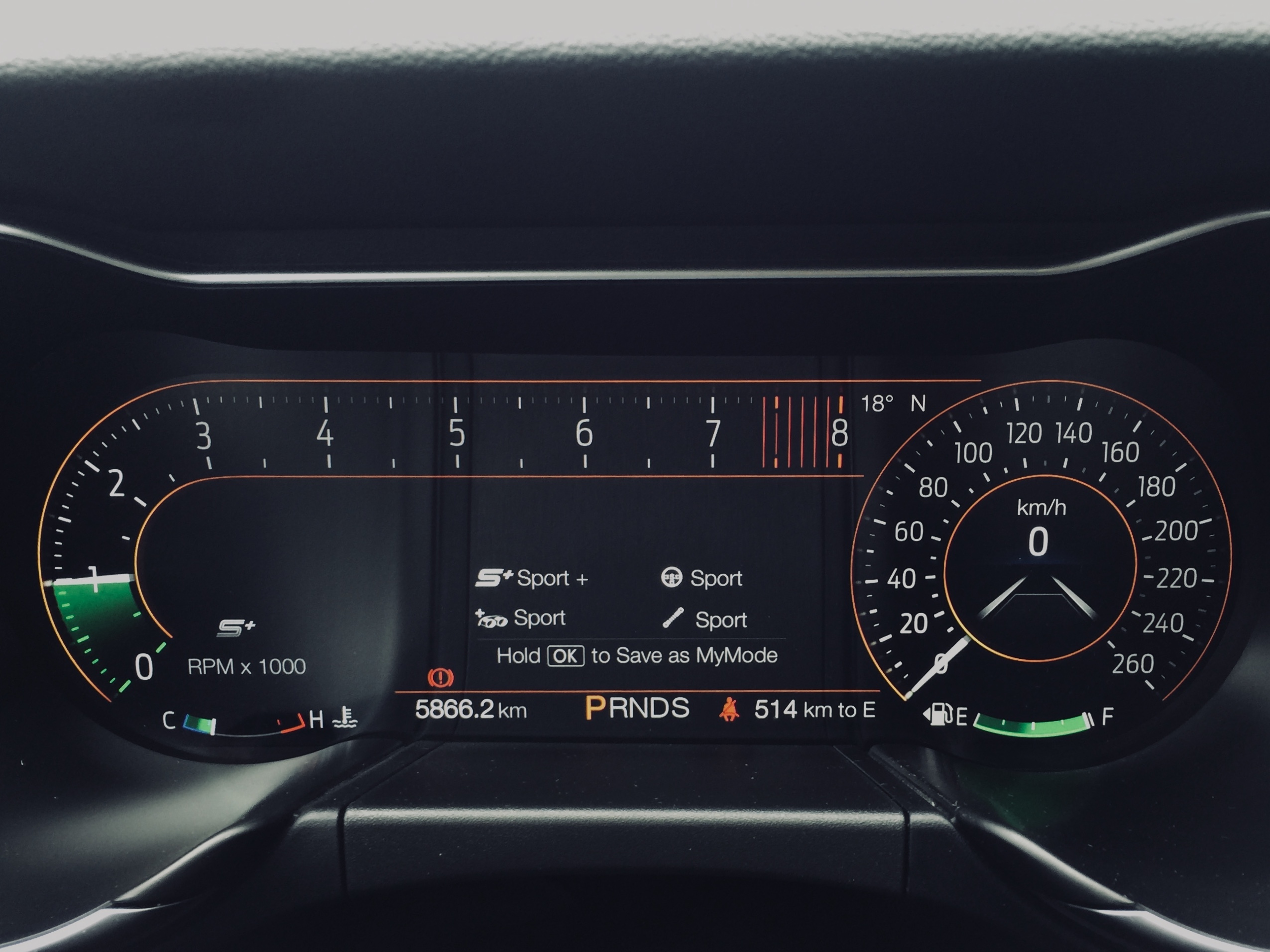 All this goodness comes at a price, naturally. One wouldn’t expect a Ruth’s Chris steak on a Big Mac budget, after all. Starting with a GT Premium Fastback priced at $47,288, our tester quickly burned through the options book to ring up a heart-stopping price of $63,388. If one were to delete some frou-frou, but keep the performance options of this car, it would still approach fifty-five large.

Hardly chump change. But, then again, this isn’t exactly a car for chumps. The attention it drew during my 72-hour fling was unmatched by anything else this side of a Panzer tank painted pink and driven by Katy Perry. That alone – and the Line Lock, of course – are worth the price of admission.

Just remember to use the Good Neighbour feature on a cold October morning. Sorry, Gord. 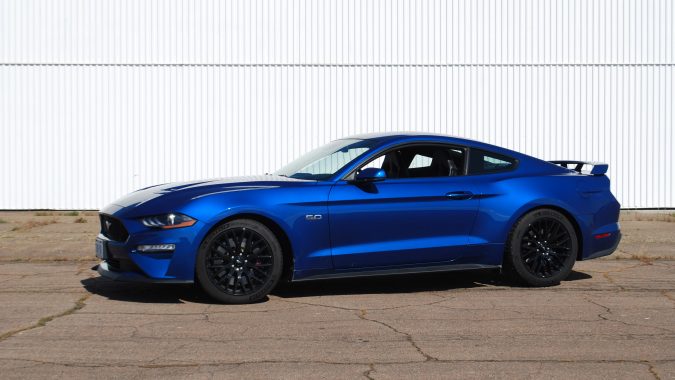 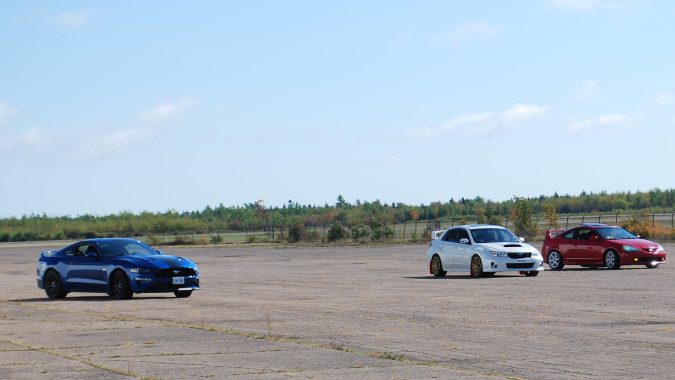