The TT RS is a weapon that can quickly fling its passengers to extra-legal speeds with extraordinary levels of precision, the perfect fifth car for those who can afford it, an exquisitely crafted toy.

A trebuchet, you may recall from high school history class, is a catapult type of weapon that first showed up in Ancient China during the 4th Century BC. It is said that soldiers preferred it over a regular catapult thanks to a mechanical design which employed a counterweight, allowing it to fling its payload over longer distance with greater accuracy. Its launch speed was tremendous.

Great mechanical design, high level of accuracy, and a gonzo launch speed? Seems the primeval weapon has a lot in common with the 2018 Audi TT RS.

In a world filled with four cylinder engines boosted to within an inch of their lives, many of which live within the VW/Audi wheelhouse, this direct injection turbo five-pot excites the senses with a ripping exhaust note that, at 88-decibels under full throttle, sounds like god’s own bedsheets being torn in half.

The optional $850 sport exhaust is a must-have.

The TT RS’ redline is electronically limited to 5500 rpm upon startup if the engine is cold, lest drivers try to shriek their way to seven grand the instant they bolt out of the driveway. This would be a decision that undoubtedly causes expensive noises to occur deep within the bowels of this fantastic five-pot motor.

Packing four valves per cylinder and double overhead camshafts, this lone wolf of the five-cylinder world makes 400 hp at 5850 rpm; peak torque, all 354 lb.-ft of it, comes online as early as 1700 rpm. Speed builds quickly, with 100 km/h appearing in just 3.6 seconds. That’s supercar territory. Repeated applications of the TT RS’ launch control system flattened my eyeballs and introduced my spleen to the front of my ribcage. 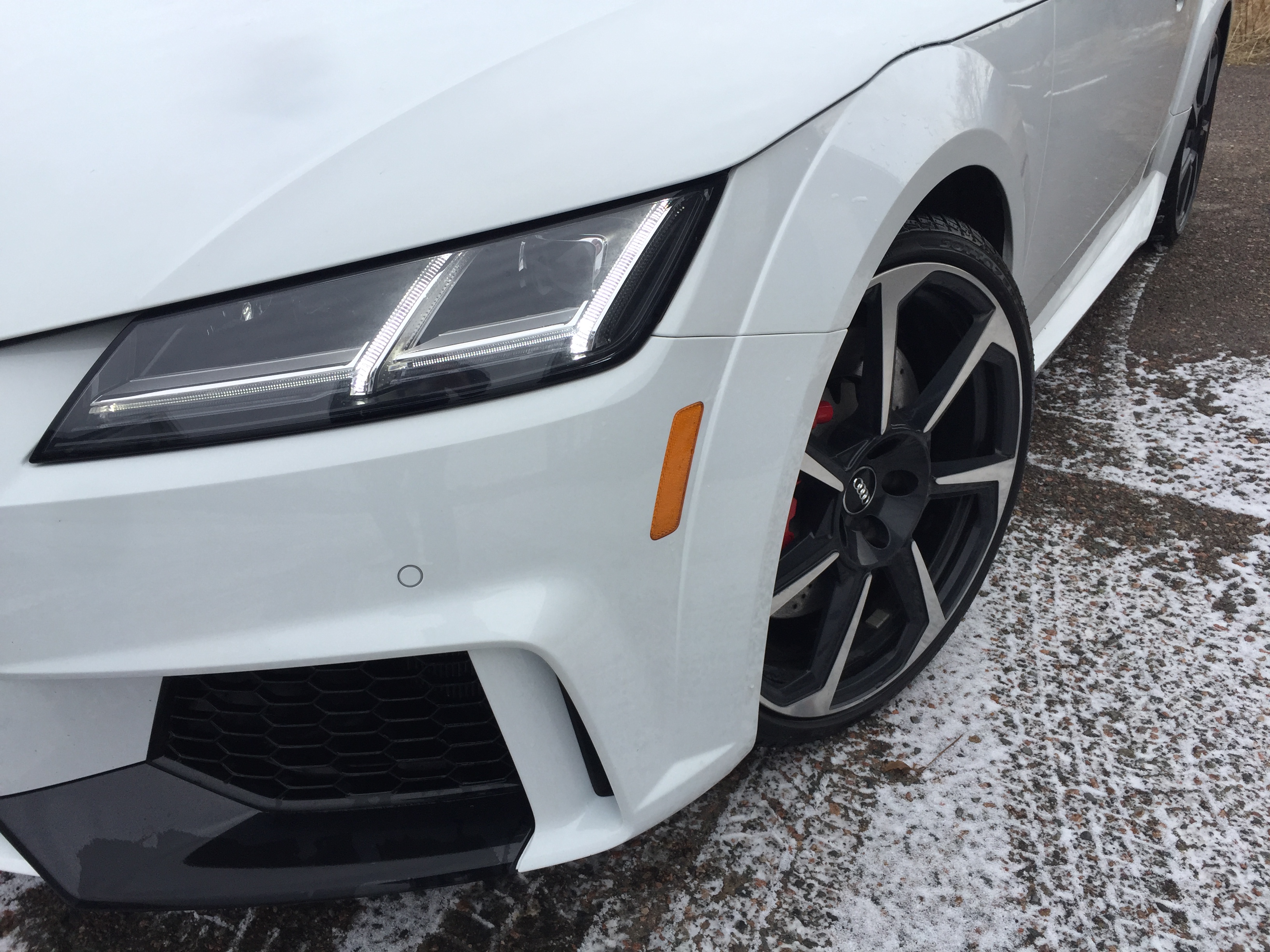 A properly executed launch in an Audi TT RS is as close as this author will ever get to a religious experience. Slip the Audi Sport shifter into ‘S’, press the Drive Mode button to select ‘Dynamic’, fully depress the brake with your left foot, and bury the throttle into the carpet with your right. If you’ve done it correctly, the fabulous inline-five will rev to 3500 rpm – squarely in the meat of its torque peak – and remain there until the driver takes their left foot off the brake pedal.

It is at this point my editor is furiously reminding me to mention these tasks must only be undertaken on a closed course and not the open road. Aiding the launch control is Audi’s Quattro system, tuned here to work in concert with the 2.5 litre motor.

Steering inputs are instant and precise, as if the TT RS’ wheel is an extension of the driver’s body, even shod with winter tires like our tester. Put simply, at a lithe 3306 lbs, it has steering that speaks and brakes that listen.

Let me give you an example of its wonderfully needless attention to detail. The hood, which covers that glorious five-cylinder engine is of a clamshell design, wrapping down around the sides of the TT RS to meet the fenders. It wraps down so far, in fact, that the edges of the hood integrate the top of the car’s front wheel arches. After popping forward, the hood then raises to a near vertical position.

In order to perform this ballet, the team at Audi’s designed a set of hood hinges which have more engineering in them than most cars have in their entirety. Watching the hinges operate is akin to watching several pairs of really sharp scissors perform a carefully choreographed yet complicated dance without cutting anybody. It is mesmerizing and a testament to the amount of work shovelled into this car by Audi. Even at more than $80,000, I’m going to wager they lose money on every single one.

Raising the hood and putting the inline-five on display so passers-by can gawk at it, turned out to be an integral part of each refuelling stop with in-the-know gearheads going nuclear with questions and non-car types swooning over the Audi’s gorgeous body. Feeding the TT RS (with premium fuel, natch) often took at least ten minutes, as your author was besieged with attention at every stop. 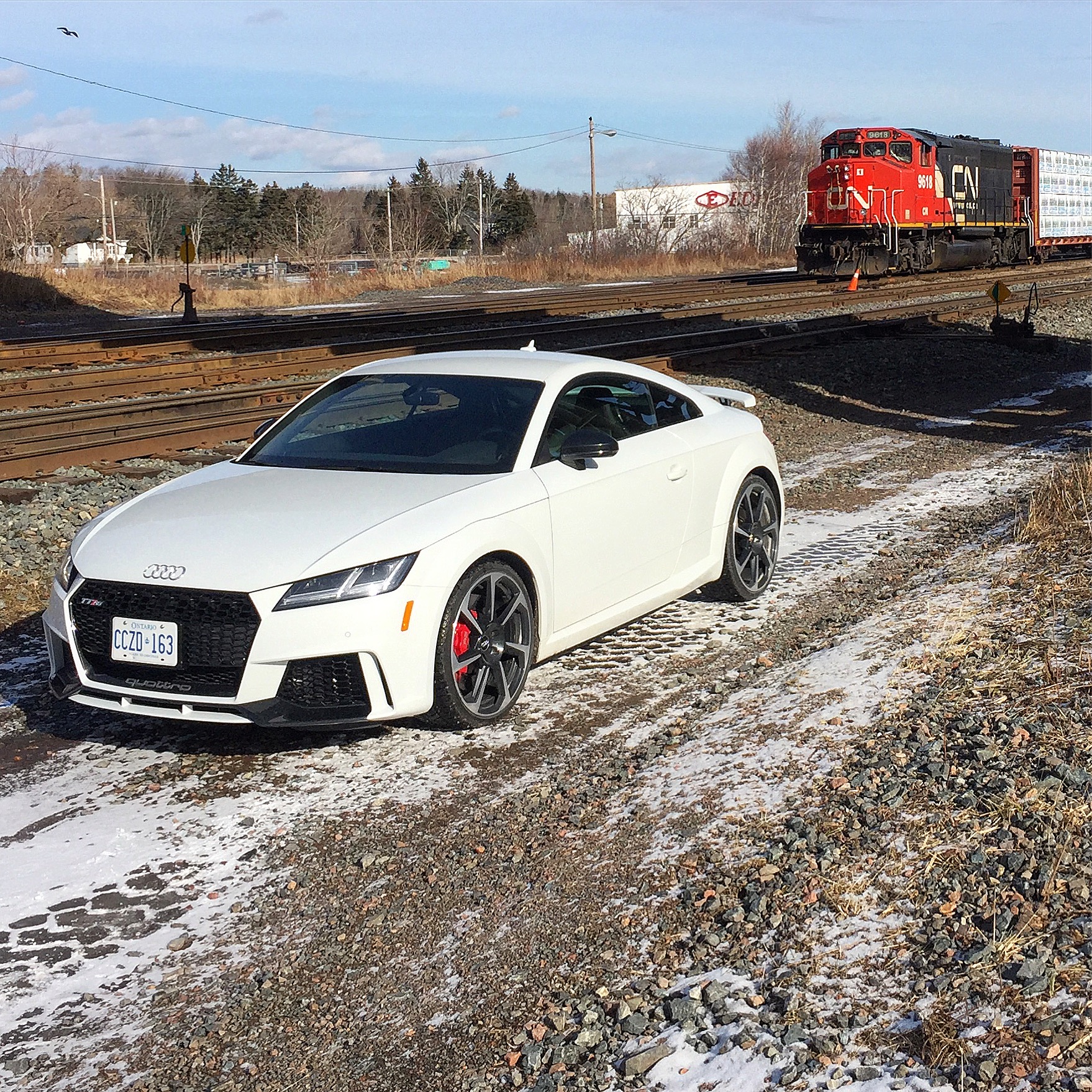 And there will be plenty of stops, given the Audi employs a thimble for its fuel tank, which it drains quickly.

Other downsides? Well, the car is infinitely impractical, with few storage places inside the cabin and a USB port whose location is best defined as “up there somewhere”. Human eyes surely can’t find it. The backseat is simply an extravagantly upholstered parcel shelf, its legroom existing only in the minds of the madmen (and women) who designed this thing.

It is also eye-wateringly expensive, setting an opening bid of $72,900, which is an even $10,000 more than its mechanical twin, the four-door RS3. Style has a price.

Options add up quickly: $1200 for superb OLED taillights, $1450 for a tech package that includes Audi’s so-called Virtual Cockpit, $400 for red brake calipers. The list goes on to an as tested price for the car you see before you of $82,335.

None of those complaints matter. The 2018 Audi TT RS is the perfect fifth car for those who can afford it, an exquisitely crafted toy. Its cabin is as decadent as its acceleration is physics defying.

I want one badly. As a gearhead, so should you.

Audi has gone through a lot of cost effort to create this low-volume car, as the TT RS is exquisitely crafted and packed with enough performance that it can, and should, be mentioned in the same breath as the company’s own supercar—the mighty R8. The company’s pencil-necked accountants must be apoplectic. This pleases me to no end.

Like a trebuchet, the TT RS is a weapon that can quickly fling its passengers to extra-legal speeds with extraordinary levels of precision. The ancient warriors were rewarded with the vanquishing of their enemies. TT RS drivers will be rewarded with physics-defying acceleration and handling, a sumptuous cabin, and an engine note that sounds a lot better than the newly-muffled Porsche 718 Cayman. 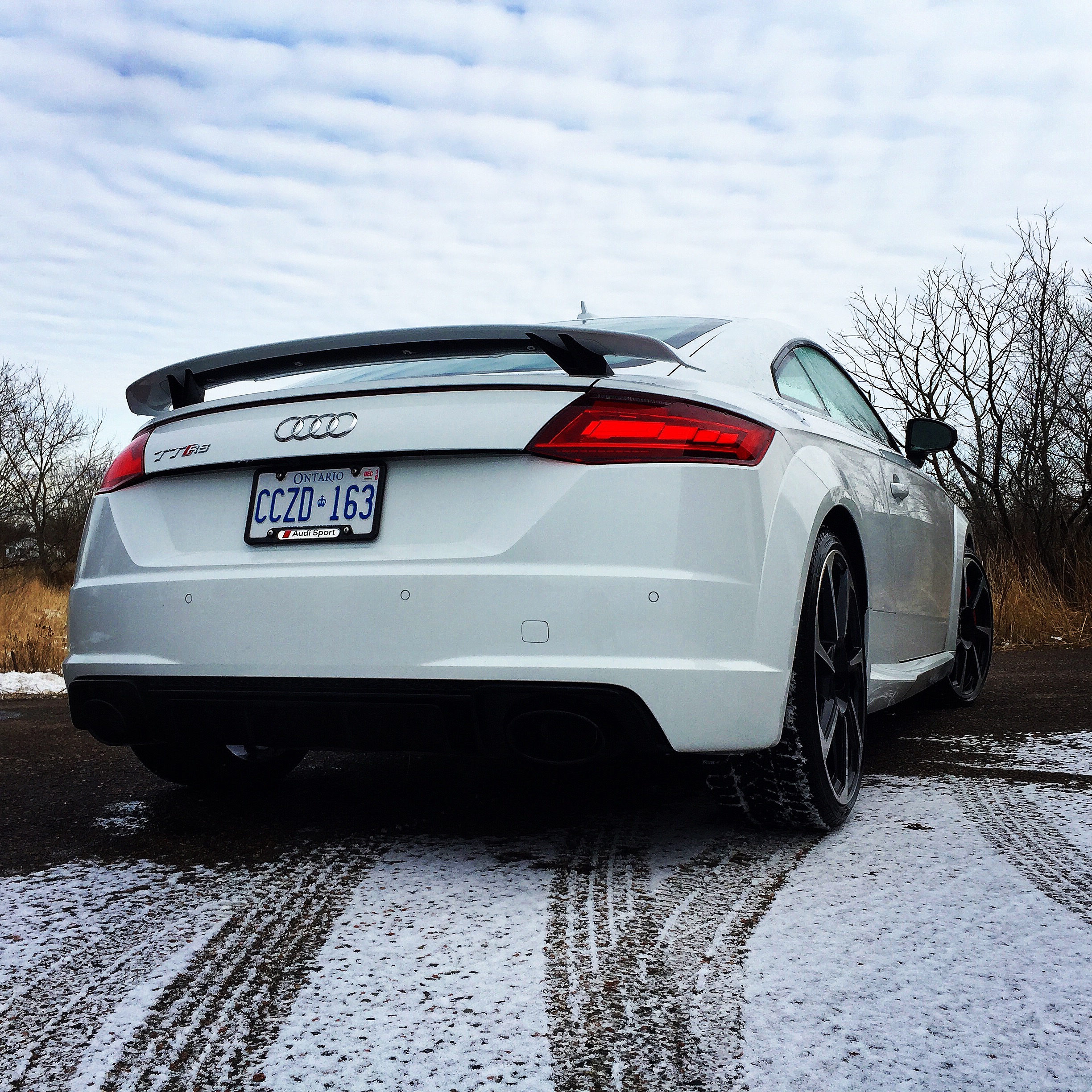 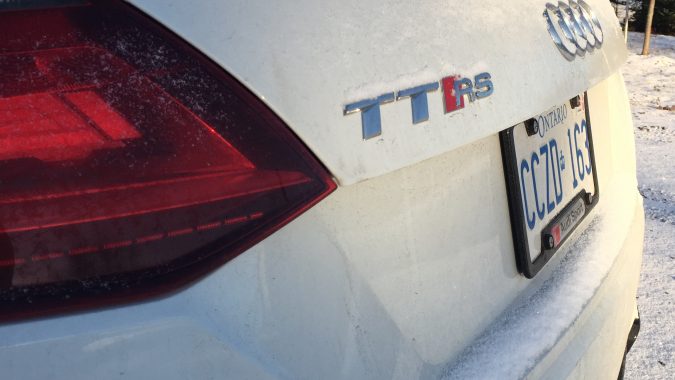 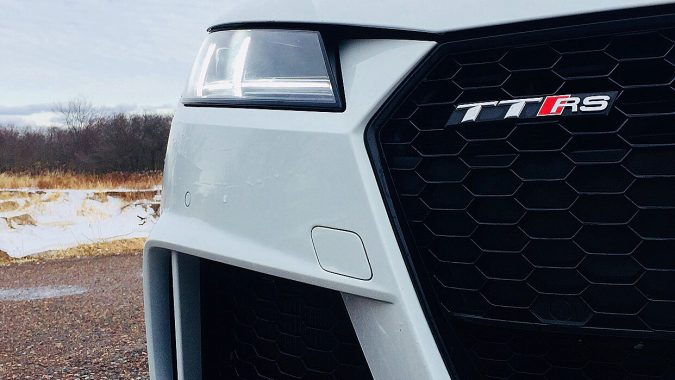 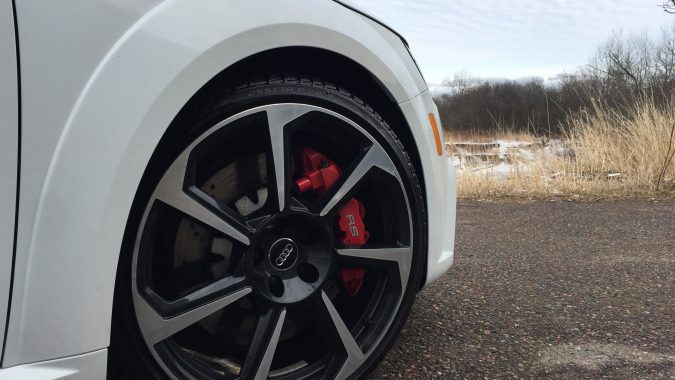 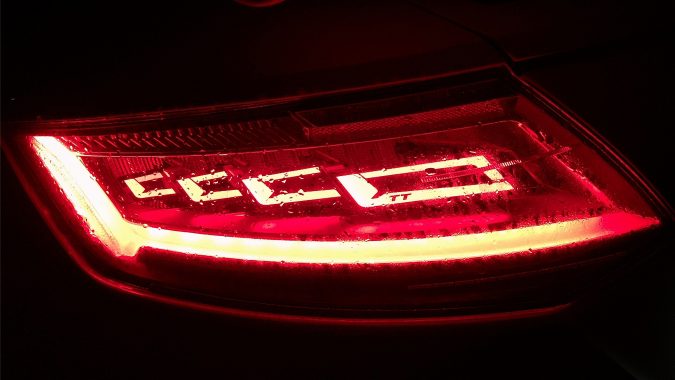 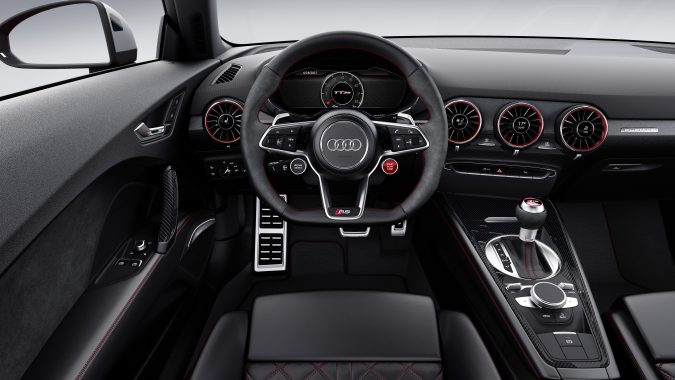 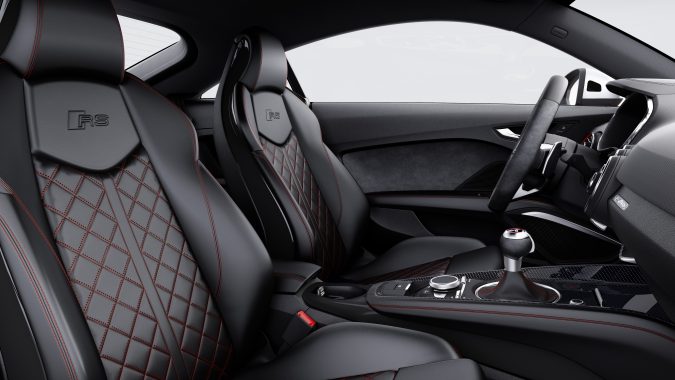 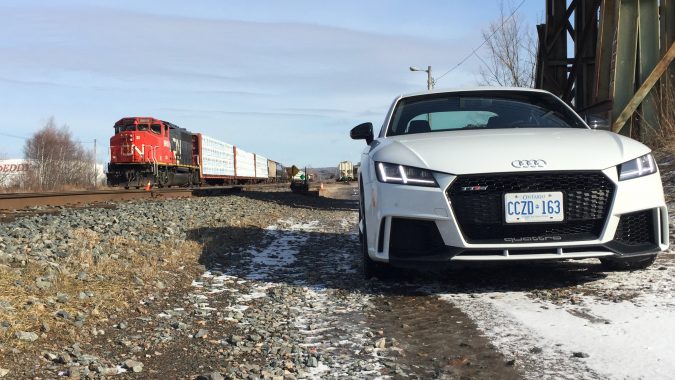