The Volvo XC90, which just won North American Truck/Utility Vehicle of the Year honours, is an excellent SUV for one reason alone: it handles the eccentricities of family life better than any other vehicle I’ve driven.

The Volvo XC90, which just won North American Truck/Utility Vehicle of the Year honours, is an excellent SUV for one reason alone: it handles the eccentricities of family life better than any other vehicle I’ve driven.

My husband and I are impulsive at times and it occasionally lands us in some unfortunate comedies of errors. You’ll soon find out how.

One recent trip to that Swedish big-box furniture store started as a post-holiday storage stock-up. But, without warning, it morphed into the purchase of a queen-sized bed.

We chose one we liked, made a parts list, picked out linens, and headed to the warehouse to fetch the large items.

And wouldn’t you know it? The mattress we wanted was, naturally, sold out.

Only one location in the GTA had any in stock. It was the store in Burlington, nearly an hour away. There, only two remained. And to top it all off, the city was about to be hit by its first true snowstorm of the winter. 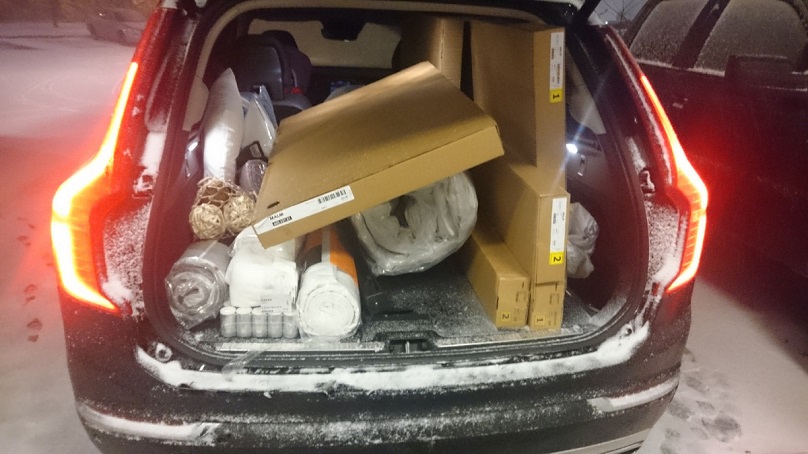 Being hard-headed once our minds are made up, we hastily loaded up our many boxes and bags, a job made easy with the XC90’s flat-fold seats and 40/20/40 split second row.

It’s in here that we find one of the few things not to like with the XC90. The SUV could benefit from easier access to the third row, though it’s not bad. It would also be nice to have some kind of easy-up feature when those seats are down.

In any case, we belted our five-year-old daughter into the lone remaining rear seat and set off westward.

The roads were slushy on the outbound trip but not terrible. The voyage was fruitful: when we arrived, a mattress was awaiting us.

But in the 20 minutes between grabbing the mattress, paying for it, and walking out, the wind and snowfall picked up considerably.

With ice whipping our faces, we crammed in an entire Ikea flat-packed queen bed without having to fight much at all. Plus, there was still space for the three of us. We were duly impressed.

Everything fit inside the XC90’s shell. Although the exterior styling bucks the current luxury trend of curving large SUVs into coupe-like shapes, a little less fashion sense goes a long way in terms of functionality.

After loading up the SUV, it was time to get safely home.

It’s no secret that the Swedes design good winter cars. That said, the XC90 exceeded my expectations. The unplowed and unsalted roads were covered with 10 cm of snow, and I felt like I was driving on dry pavement.

But plenty of automakers build spacious and capable vehicles these days. The XC90 has one far less common attribute that makes it stand out.

My husband and I are somewhat prone to anxiety and verbal sniping in stressful situations, even self-inflicted ones.

In here, all three of us were comfortable. The adults up front enjoyed Volvo’s renowned front-row seats, and our daughter benefited from the standard panoramic sunroof and four-zone climate control.

The tablet-like infotainment system is a snap to use, making navigation easy and music selection, often a point of contention in our lives, even easier.

The interior design in our tester’s Inscription trim appears to be inspired by a yoga studio. It’s remarkably quiet and features a clutter-free, minimalist layout trimmed in supple Nappa leather and open-pore wood grain. 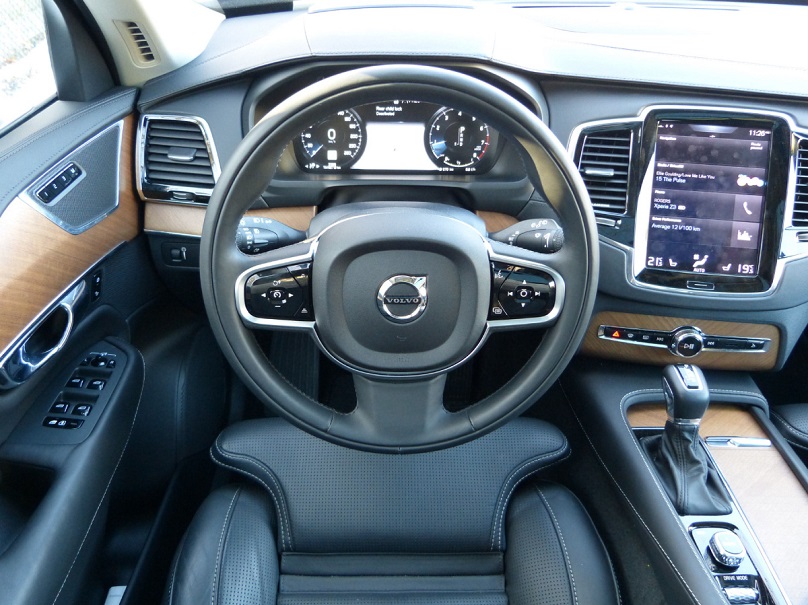 From behind the wheel, the XC90 seems smaller than it is, getting around city streets and in tight, urban parking lots with enough ease to make you forget you’re driving a seven-seat SUV.

And the engine is one of the best parts. The T6 Drive-E uses a supercharger at low revs and switches seamlessly to a turbocharger as they climb, smoothly delivering near-constant torque and very good fuel economy for this vehicle’s heft.

What this car achieves best is calming and de-stressing its occupants, particularly the driver.

Where some trips of this nature have seen my husband and I pull into our driveway biting each other’s heads off, at the end of this one, we high-fived our renewed sense of adventure.

Of course, we then needed to unload everything, get our daughter tucked in, and decipher those infernal instructions to build our new bed.

We could have used a little extra Zen for that process, too. Maybe we should have built it in the back seat of the car.

Freelance writer Stephanie Wallcraft is a regular contributor to Toronto Star Wheels and thestar.com/autos . To reach her, please email wheels@thestar.ca and put her name in the subject line.

ACCESSIBILITY: Third row is roomier than many but still tricky to get to, an extended hip support cushion can easily get in the driver’s way, otherwise excellent

INTERIOR: As Zen-inducing as a yoga studio, particularly with the Nappa leather and open-pore wood in Inscription trim

PERFORMANCE: As enjoyable a 2.0 L I4 as you’ll find — plenty of accessible torque without the exorbitant fuel bill to match; transmission is quick and punchy but not intrusive

RATING: It’s cleaning up in this year’s awards for good reason. If I had the money to buy this car, I would have one by now.

FOUR REASONS WHY THE VOLVO XC90 IS A BIG WINNER

The Volvo XC90 is piling up an impressive collection of accolades, including being named North American Truck/Utility Vehicle of the Year at the Detroit auto show, where it won over the other two finalists, the Nissan Titan and Honda Pilot.

Here are four reasons why the new XC90 came out on top:

Interior serenity: Most of us spend a lot of time in our cars, and an automaker’s ultimate achievement is to make that time as enjoyable as possible. While all three of these vehicles are well-designed and boast very quiet cabins, the XC90 stands apart with its exceptionally comfortable seats, minimalist centre console design, and available materials, such as Nappa leather and open-pore wood, that are a sensory delight.

Smart infotainment: Volvo’s new infotainment system is distinct in that it operates more like a dashboard-mounted tablet than the plethora of buttons and dials we’ve become accustomed to. The system is well laid out, intuitive, and easy to glean information from quickly while driving. Plus, the volume control is one of the very few things that Volvo keeps on a separate knob rather than integrating it into the touchscreen, which is the single most common usability complaint about Honda’s touch-driven system.

Great powertrains: The Titan XD’s Cummins V8 diesel turned Nissan’s big-boy pickup into a serious contender overnight, but dropping a diesel engine into a pickup isn’t groundbreaking on its own. Similarly, the Pilot’s 3.5 L naturally aspirated V6 is stout but certainly nothing new. The XC90, on the other hand, can house two distinct and innovative power units: the T6 Drive-E combines a supercharger and a turbocharger to deliver great torque over a massive r.p.m. range without running up an exorbitant gas bill, and the T8 incorporates that same technology into a plug-in hybrid. It’s truly outside-the-box thinking, and it works.

Value for money: Each of these vehicles is undoubtedly a great value to consumers for what it is. How the XC90 stands out, though, is in taking high-end buyers deep into the luxury space without dragging the price tag too far along for the ride. Though several of its competitors have base prices that start at or below that of the XC90, they tend to demand a fair bit more optioning to attain similar levels of features. The XC90 has a just-right balance of understated elegance and practicality without adding in extravagance for the sake of it.