Range Rover Velar is Poised to Lead the Pack

Mid-size model has modern, handsome styling, inside and out & Land Rover expects Velar to become its best selling vehicle.

ALESUND, NORWAY-There was a time when Land Rover introduced a new model every 20 years, whether it needed one or not. Not anymore.

Especially since the company found long-term stability in the arms of the Indian Tata organization, it can focus on new models without the threat of impending financial doom.

‘Velar’ has a bit of history as a nameplate. In the late 1960s, when the original Range Rover was being developed, the prototypes were badged ‘Velar’ in an attempt to confuse spy photographers and others who might be interested in what the company was up to. 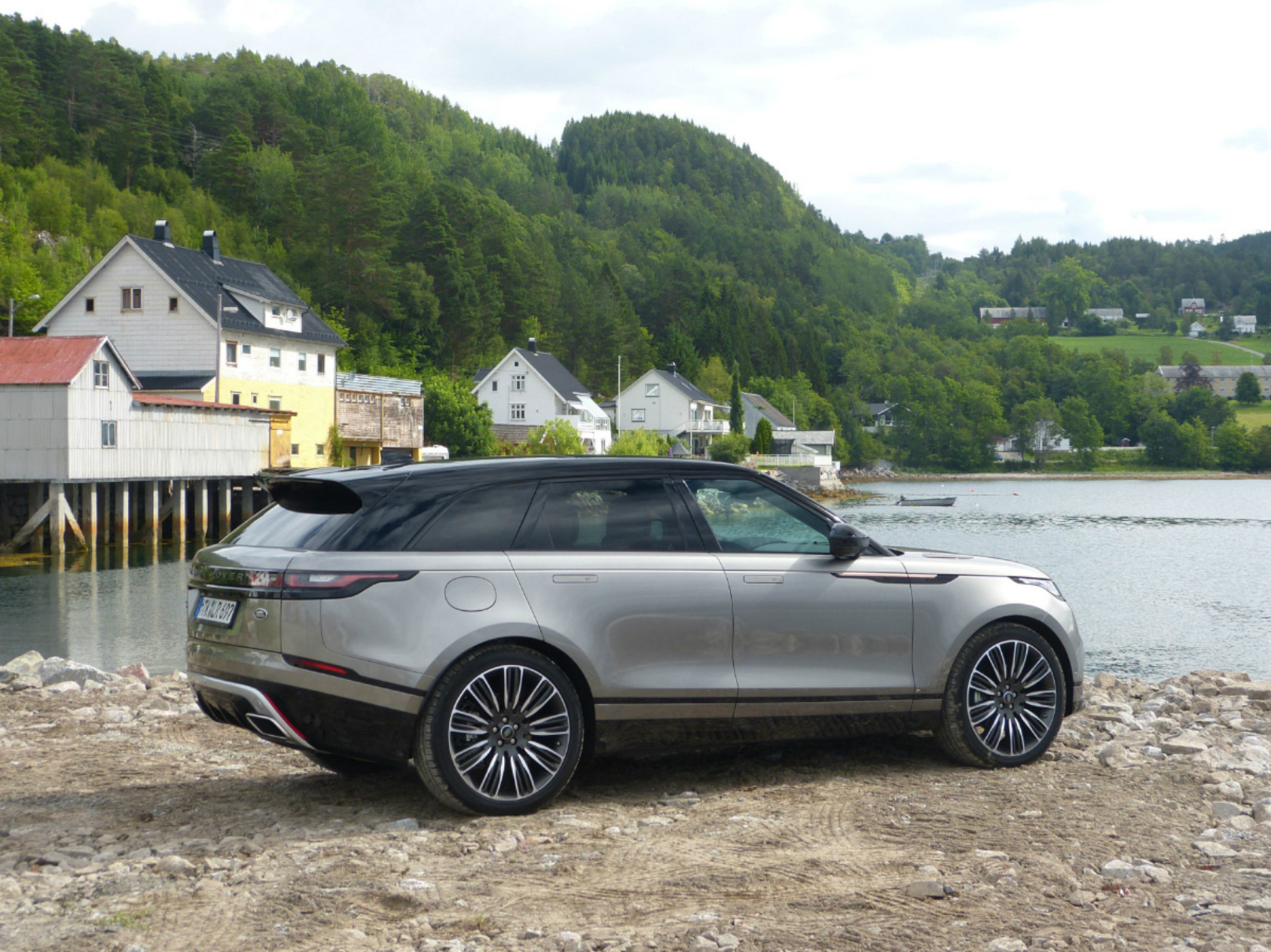 Why ‘Velar’? It means to ‘cover up,’ as in ‘to wear a veil’ in Spanish. It also appealed at least partially because they didn’t need to cast any other letters (‘LAnd roVER’) to make up badges for the fake name. Hey, times were tough in those years …

Structurally, Velar is related to the F-PACE from Range Rover’s corporate cousin, Jaguar. It shares a wheelbase, some underbody components, and drivetrains, but is otherwise its own vehicle.

Given that much of the body is aluminum, it’s a bit surprising Velar weighs in at over 2,000 kilograms.

Our test car in west-central Norway (which would be west-WAY-north, by anyone else’s standards) was the all-singing, all-dancing ‘First Edition’ (Kenny Rogers, anyone?) which will be the trim level of the first 50 or thereabouts Velars to hit our shores starting later this month.

This model comes only with the 3.0-litre, 380 horsepower supercharged V6; the other engine that we’ll get in lesser trims is the 2.0-litre turbo Diesel. The Americans also get a four-cylinder gasoline engine but we won’t.

An eight-speed automatic with paddle shifters is the only transmission. All Velars will be full-time, four-wheel drive with a single-speed transfer case.

All our Norway test cars were painted in a new colour, ‘Flux Silver,’ which made it easier for me — I didn’t have to get up stupid early to grab the red one because there weren’t any.

(OK, I did grab a red one belonging to a staff member at lunch for a couple of photos.)

Velar represents something of a departure for Range Rover design. Until the Evoque, all ‘Rangies’ — as our British friends call them — seemed to have been designed with a ruler — all straight lines and square edges.

Of course, if you’re designing an SUV, you gotta have room, and a box is still the most efficient shape. But in the Velar, the roofline tapers downwards at the rear, giving a more pleasing silhouette.

Yes, it reduces cargo room slightly, but who ever fills even an SUV to the roof? As it stands, Velar offers some 673 litres with the 40/20/40 split rear seats all up.

Rangies have also traditionally had huge, round headlamps; Velar has among the thinnest trapezoidal units in the business. 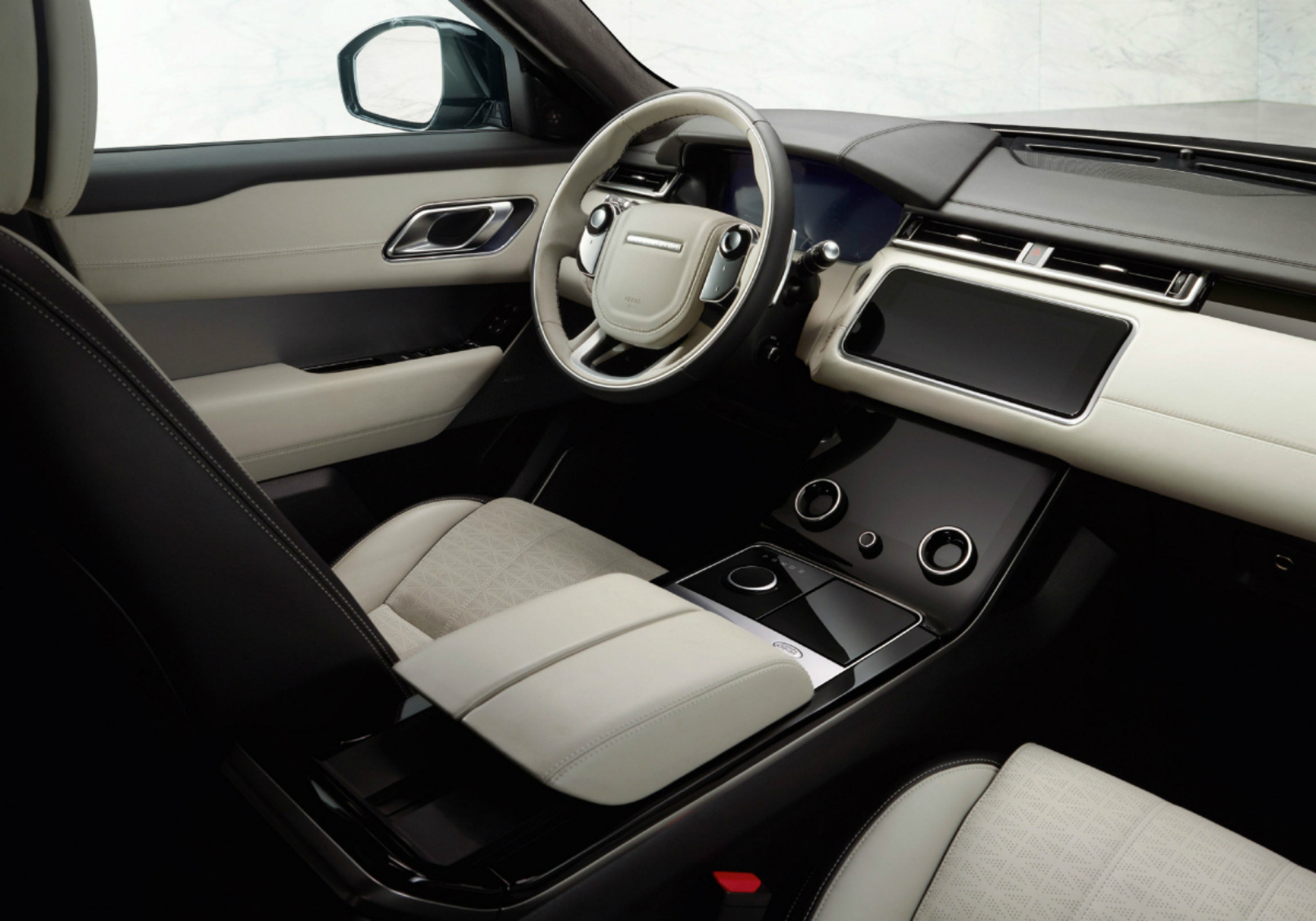 The stylists wanted them even thinner, but the engineers insisted that they be big enough to actually light the way, so they compromised over about a 10-millimetre difference.

Not that we drove these vehicles at night, but you can be assured of two things: the European lighting system will be sensational; ours less so, because some North American lighting laws remain mired in the 1940s. Some day …

One interesting design feature is the disappearing exterior door handles. Unlike on Jaguar’s F-Type, where they pivot out, these are rectangular D-shaped handles that slide out when the doors are unlocked.

This gives a cleaner shape to the car’s sides but does make taking photographs additionally tricky. Get out, power-lock the car from the ‘other’ side, then leave that door unlocked in case you somehow lock the keys inside (it happens), then remember to manually slide the automatically folding side-view mirror back into place.

Inside, they’ve gone for the cleanest look possible with premium materials everywhere. Leather, of course, but in response to apparently powerful lobbying from animal rights activists, they offer new upholstery using man-made fabrics.

I’m no fan of leather — too hot in summer, too cold in winter, too slippery all the time — whatever happened to good old cloth?

The seats are comfortable and there’s plenty of room in the rear for three adults, provided they are on friendly terms. Velar is a five-seater; no third row is available.

Gerry McGovern, Land Rover’s chief ink-thrower (I guess that now should be ‘pixel arranger’) has fallen in love with digital instrumentation. Trying to out-Tesla Tesla, he has two 12-inch central screens in Velar and another array of reconfigurable displays in the central cluster. Everything is controlled by a couple of round knobs whose function changes depending on which screen you call up.

Listening to the radio? Volume and station selection. Air con? Temperature and fan speed. All well and good.

But a magazine which Land Rover gave out at the press preview included the phrase, ‘Gone are obtrusive buttons and displays,’ as if that were a good thing.

Um, if you have to see something and control something in a hurry, shouldn’t the buttons and displays be as obtrusive as possible? And accessible without looking at them? Having to page through a series of screens to find what you want — and the Velar’s system is not the fastest-responding in the industry — is not the safe way to do it.

Plus, it requires you to take your eyes off the road, and in an emergency, on the road is exactly where your eyes should be. 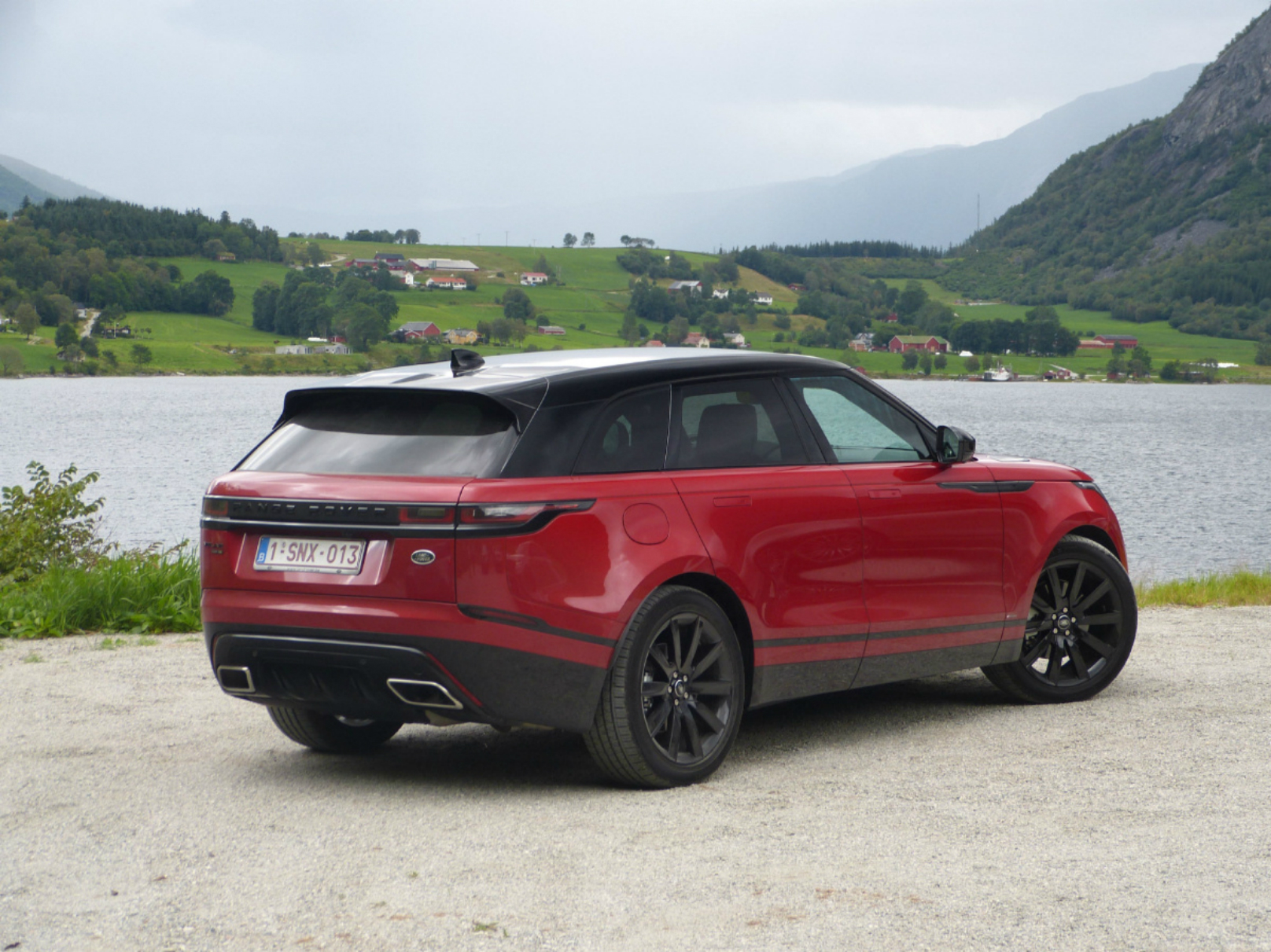 Most countries outlaw cellphone use while driving. Why emulate that technology in the car itself?

They call this system ‘InControl®,’ without a hint of irony. But in the press kit is this caveat: “Do not use Land Rover InControl® features under conditions that will affect your safety or the safety of others. Driving while distracted can result in loss of vehicle control.” In other words, don’t use this system when you are driving.

This may make the full panoply of nanny systems on Velar — lane-keeping assist, automatic braking, etc. — even more important. Somebody’s got to be paying attention.

More so even than for all modern cars, you need a long evening with a large coffee and the owner’s manual before you attempt to drive a Velar.

This is made even more critical when you start to use the vehicle off-road. There are about a million permutations you can select to tailor ride height, engine, r.p.m., road speed, and traction, depending on the surface you are attempting to traverse.

They laid on a few challenging bits of terrain for us but also brought along some of their test rigs’ steel ramps, creating impossible-looking angles, which, of course, the car took on with ease. It is quite literally beyond belief what this vehicle can handle.

No one in their right mind (which, of course, excludes journalists) would take a $100,000 car on roads like these. But just like few Porsche owners will ever hit 250 km/h, part of owning a Land Rover is knowing that you could.

Our ride-and-drive route took us through Trollstigen, legendary home of trolls, doll-like versions of which are on sale everywhere.

This is an 11-switchback lane-and-a-half road built as a make-work project in the late-’20s/early-’30s. If only they could have cordoned it off for us! Sadly, it was littered with motor homes and small vehicles towing large trailers which at least left us the luxury of marvelling at the scenery, which is beyond spectacular.

Most Norwegian roads are in excellent shape — their public works budget must be enormous — so, they aren’t much of a test to a vehicle’s suspension. But some klicks on some rougher secondary roads showed that Velar’s air setup provides excellent ride quality and crisp handling.

The supercharged V6 provides sparking acceleration and can handle up to a 2500-kg trailer load.

The transmission was sometimes a bit slow to respond to throttle-induced downshifts but otherwise shifts seamlessly.

Land Rover expects Velar to become its bestselling vehicle. It has a lot going for it. Provided you take the time to learn how to handle it.