Alongside minivans, there are new models on the market that aren’t specifically meant for that segment but can do the job just as well. The latest to hit the ground is the Mercedes-Benz Metris.

Alongside minivans, there are new models on the market that aren’t specifically meant for that segment but can do the job just as well. The latest to hit the ground is the Mercedes-Benz Metris.

The Metris is already a familiar sight overseas where it’s known as the Vito. It uses a 2.0-litre turbocharged four cylinder engine that cranks out 208 horsepower and can be optioned with a start/stop function that shuts off an idling engine for better fuel economy. It’s hooked to a seven-speed automatic transmission, which allowed Mercedes to add a necessary feature for North America: the space used for the shifter in European vans is filled with a large cupholder.

There’s a diesel available in overseas models but we won’t be getting that, at least not in the foreseeable future. Premium fuel is recommended for the Metris’ turbocharged engine, although it can run on regular grade gas with a slight drop in power.

Pricing starts at $37,900 for the passenger version; a $4,000 cheaper cargo version is available. Each comes in a single trim line with available options and the passenger van can hold seven or eight people, depending on the second-row chairs that you choose. Both versions are rear-wheel drive, with no current plans for an all-wheel model. 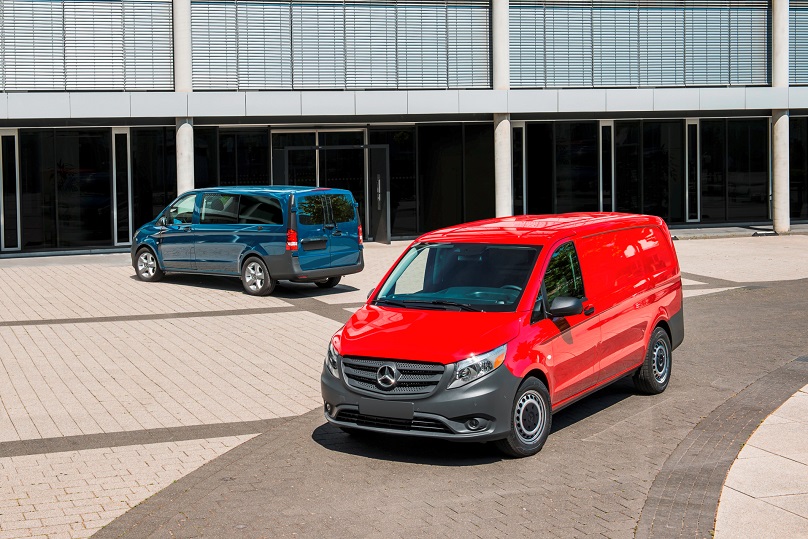 I found that the Metris works well through narrow alleys in downtown Toronto. It has a tight turning radius that’s comparable to most minivans, while its maximum height of 91 cm allows it to fit easily into most underground parking garages.

The passenger van has a smoother ride than the cargo version thanks to modifications to its suspension system, while mine had an optional luxury package that adds dampers to make it even more supple and comfortable for occupants.

Driving it is similar to piloting a minivan. Acceleration is linear and the stout little engine is up to the task, with good passing power on the highway and quiet operation. The transmission is equally good and well-matched, with seamlessly smooth gear changes.

The steering is light when you’re making lower-speed manoeuvres but subtly tightens up at highway speeds for more confidence, while its stability control adjusts for gusty crosswinds to keep it stable. Despite its height, the Metris doesn’t feel top-heavy and it corners well.

But I definitely don’t like the mirrors. They’re too small and oddly distortive, often leaving me unsure of exactly what’s alongside. You’ll want the blind spot monitoring system, which comes bundled in a $1,660 package that also adds such items as lane keeping assist, front collision warning, and rain-sensing wipers.

The passenger van can be optioned with two power-assist slider doors instead of the open-it-yourself variety.

Overall, the Metris is a great people-hauler, with excellent visibility, comfortable seats, lots of legroom, storage space for the driver to drop a purse or pack within easy reach, and easy-to-use controls. While it has 1,076 litres of cargo space behind the rear seat—more than a Dodge Grand Caravan or Honda Odyssey—you can also remove the second- and third-row seats if you need to reconfigure it for Ikea visits. Child seat anchors are standard equipment.

Owners can opt for a minivan-style liftgate with the Metris. Since this van has work duty roots and down time for fleets is expensive, the recommended maintenance schedule is every 25,000 km.

So while it’s not a minivan, the Metris can easily substitute for one as well as a replacement for Mercedes-Benz’s discontinued R-Class three-row crossover. It might be meant for fleets, but it’s a good fit for families too.

COMPETITION: The Chevrolet Express has an older design that’s larger than the Metris. It starts at $35,785.

The Ford Transit Connect starts at $27,849 and is smaller than the Metris, which currently has no direct rival in its size