PREVIEW: Mercedes-Benz G-Class keeps up with the times

The cross country vehicle that drinks fuel like a thirsty race car, mostly thanks to its slab-fronted aerodynamics and solid weight.

FRANKFURT, Germany—Mercedes is quick to call its G-Class SUV an icon. At 36 years old, it’s certainly that.

But so is a ’59 Caddy with sky-high tail fins, and the original Harley-Davidson Sportster, and Meatloaf, and Jack Nicholson. It doesn’t mean they’re still any good.

Cadillac and Harley kept up with the times by redesigning everything — can’t say the same for Meatloaf and Jack — but the G-Wagen just keeps soldiering on. It looks a little different from the utilitarian off-roader of the 1980s, on the outside at least, and that’s why its owners buy it. It’s “quirky” after all.

For the first half of its life, it was the only SUV in Mercedes’ lineup, stripped-down for the military, but now it’s just one of at least six. Popular demand for crossovers and SUVs increased 25 per cent around the world in the last year, and the German automaker is moving quickly to satisfy it. Already in 2015, Mercedes introduced the GLA and GLE and GLC, and it’s soon to reveal the GLS.

RELATED: 2016 Mercedes-Benz GLC has a recipe for success

But the G-Class heads the family at $123,000 and up. This year, it’s got a new front bumper, a retuned suspension, a new, less-gluttonous engine in the G550, and an instrument panel with such a subtle redesign I had to stare at photos of the old and new like a game of “Spot the Difference.” Other than that, “Why change an icon?” says Mercedes.

Actually, there are plenty of reasons. Let me list a few.

It drinks fuel like a thirsty race car, mostly thanks to its slab-fronted aerodynamics and solid weight. The new 4.0-litre biturbo V8 in the G550 is apparently 17 per cent more fuel efficient than the previous generation, but that only translates to a European combined fuel consumption rating of 12.3 L/100 km.

Some of that time was in the city, some was hauling on the Autobahn, and most was stuck in traffic. But even so — it brought back memories of a couple of years ago, when I drove a G63 AMG to Ottawa from Toronto and it cost me $250 in premium fuel. A “normal” vehicle would probably cost about $100 for the round trip.

Most owners don’t care about fuel consumption, however. Mercedes says 70 per cent of its Canadian buyers opt for the 571 hp G63, or now its 630 horsepower G65 AMG V12-powered big brother. These are trucks that cost at least $153,000 — prices aren’t official yet, but the G65 will probably be about $250,000 — and they are especially popular in the Middle East, where the locals call them “sheik mobiles.”

So forget about the fuel. How’s the ride?

Well, it’s loud, thanks to the near-vertical windscreen. And you can’t see much out the back window, thanks to the rear headrests and the giant spare tire obscuring much of the glass.

It’s comfortable enough, cosseted by thick leather and seats that adjust every which way, but if you’re the driver, the throttle pedal is too close to the seat. My foot ached in the awkward position and I turned on the cruise control whenever I could. 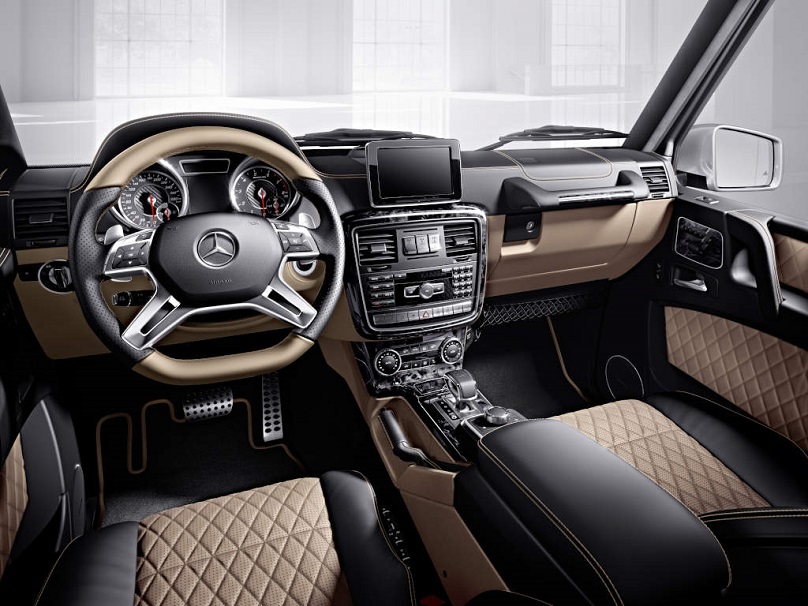 This is a vehicle that started out as an army truck, don’t forget. It was only when the Hummer was popular that Mercedes began kitting it out to meet public demand.

It’s also going to be cramped if there are passengers in the back. When the people in the front have enough legroom, those at the back are compromised, and vice versa. Headroom’s not a problem though. There’s lots of room to keep your helmet on.

My biggest complaint, however, is with the light steering that feels completely devoid of feedback. It uses a recirculating ball and is very easy to drive on a dirt track. On the road, it’s sloppy and slow and takes some getting used to. I tried several times to turn a corner and yelped in frustration as the G-Wagen needed an extra tweak of the wheel to make it around.

The hugely powerful engine is electronically limited to 210 km/h, but I backed off on the Autobahn at 180 because the vehicle just felt too vague at such speed. Maybe it’s fine through the sand dunes, but it’s downright scary on the fast asphalt.

Of course, the G-Wagen is intended as an unstoppable off-road vehicle, and that’s its priority. An unflappable German trainer sat in with me as I drove a G550 around a dirt course filled with impossible hills and impenetrable mud. At one point, I really thought the SUV would tip over but it did not, of course.

The G550 now comes with adaptive suspension damping that allows a Sport and Comfort setting: Sport really means highway, and Comfort really means off-road, because it’s very soft indeed. The G63 and G65 do not have this technology and while the ride is firmer and flatter, it’s still a bouncy compromise.

In fact, the G-Wagen really doesn’t have much modern technology at all. No lane assist or other driver’s aids — the windscreen is too steep for a monitor camera, apparently. No selective drive modes, other than locking the various wheels. No variable height, or swiveling headlights, or surround-view cameras.

But what you do get is a quirky and bulletproof icon, ready to take you around the world just as many times as you want. The only other vehicle that comes close for rugged dependability and interior refinement is the Range Rover. So if you’re in the market and you’ve got the money these vehicles need, get out and drive them both and decide from that. No sane voice of reason will change your mind.

Performance: Fast for such a box

Technology: Only in off-road ability

What you won’t like about this car: Driving on the 401, light steering