Safety technology is a must-have for the Tucson's target market of young families and it delivers brimming with safety.

HALFMOON BAY B.C. — The compact SUV/crossover is either Canada’s largest or second-biggest car segment, depending on whose market research you believe.

Two things are certain: It is Canada’s fastest-growing segment and Hyundai doesn’t feel its Tucson was getting a big enough slice of it. The all-new 2016 model, which is bigger, prettier and better equipped should change that.

The third-generation Tucson moves up in size, performance, ride and handling, technology and features — all for a modestly upward base price of $24,399 versus $23,999 for the outgoing model.

That gets you front-wheel drive, essentially a carry-over 2.0-litre direct-injection engine, and a six-speed automatic transmission.

Under normal driving, it’s a front-driver. But as conditions demand, up to 40 per cent of torque is directed rearward. Active Cornering Control automatically sends torque to whichever wheels have the best grip.

The driver can also select Lock mode to keep the rears in play for especially slippery surfaces.

An all-new 1.6-litre turbocharged four joins the party at the $31,549 mark, available only with four-wheel drive and a new seven-speed automatically-shiftable manual Dual Clutch Transmission (DCT), the first of its kind in this segment.

The Tucson is a handsome vehicle — maybe a 7/8 scale version of its big brother Santa Fe — but there’s not a lot wrong with that.

It’s pretty under the skin too. Structural adhesives and lots of high-strength steel increase rigidity by a remarkable 48 per cent to what Hyundai claims is best in its class.

The new vehicle has better crash resistance too, plus significantly less cabin noise, which again Hyundai claims is class-leading.

A new MacPherson strut front/multi-link rear suspension, with dampers from Germany’s well-regarded Sachs promise better ride and handling. The Tucson is also supposed to have class-leading stopping performance as well.

Most of the technical stuff you can’t see. What you can see includes a “proximity” tailgate. Stand behind the car with the key fob in your purse or pocket for about three seconds and the gate swings open. No need for the one-foot shopping bag tango, which is the case with Ford’s Escape.

The Tucson is generally nice inside too, although some black plastic bits bring the ambience level down a notch. 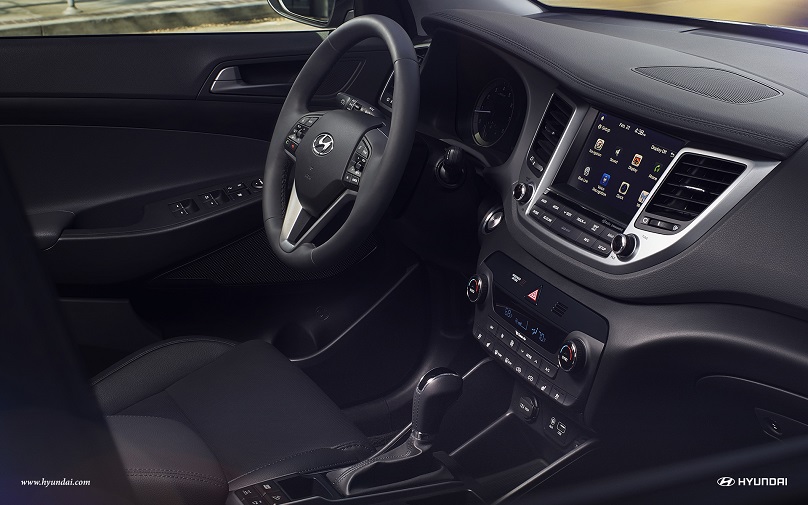 Heated front and rear seats, a heated steering wheel, ventilated front seats, and a high-end SatNav system are rare offerings in this segment.

Again, this all costs money, but even the base car gets a nice bright rear-view camera.

There’s a boatload of safety technology too.

The well-paved roads of B.C.’s middle coast didn’t put the suspension to much of a test, but the potholes we did encounter were well-handled.

The larger 19-inch wheels on our Turbo tester, favoured by designers and style-conscious customers, extracted the usual ride penalty due to the low-profile tires. Regular commuters might prefer the more forgiving rubber to wrap the 17-inch wheels on the lower trim levels.

As promised, the Tucson is pleasingly quiet.

The turbo engine is quick, although a brief hint of turbo lag dulls the response a shade. If you can’t hack the price hike for this engine, you won’t feel terribly undergunned with the base motor.

Both transmissions shift decently, and I wouldn’t expect too many compact-crossover drivers will be fully utilizing the manual shift capability of the DCT.

The base car gets a 5-inch touchscreen and a six-speaker sound system with Bluetooth, USB, iPod and AUX connectivity. Upscale models go to a 9-inch screen with navigation.

The Tucson is a stylish, roomy, well-equipped, quiet and affordable entrant in what may be the most competitive market segment in the industry.

Safety technology is a must-have for the Tucson’s target market of young families.

Some of this is smoke and mirrors — there is no such thing as a blind spot if you adjust your mirrors correctly and do a vigilant shoulder check.

Rear cross-traffic alert is also mostly irrelevant if you back into your parking spot as you should. However, there are occasions when knowing there is someone approaching your vehicle from either side behind you when your vision is obstructed can be useful.

Lane Change Assist detects vehicles approaching in the adjacent lane, measures their closing speed, and offers audible and visual warnings should the Tucson driver attempt a lane change which could trigger a crash.

Autonomous Emergency Braking detects if you are closing too fast on another vehicle or even with a pedestrian who may be crossing your path. It will apply the brakes automatically, although in practice I find these systems generally far too aggressive.

Lane Departure Warning determines if you are drifting out of your lane and beeps and/or flashes a warning to that effect.

The alternative to most of this would be that the driver would, you know, have to pay attention, and who has time for that?

If all else fails, the Tucson’s stronger body resists crashes better, and six airbags are prepared to cushion the occupants.

Much more important from a real safety perspective than any of this stuff are better brakes, better steering, and better suspension. Fortunately, the Tucson scores well on these key areas too.

The Ford Escape, which starts at $24,199, is the market leader and offers space and style.

The Nissan Rogue, which starts at $24,648, is roomy and has the best seats in the segment.